The best European cities to own an electric vehicle

With electric vehicles becoming increasingly popular, Uswitch was keen to find out which European cities were the most EV-friendly.
Share this guide 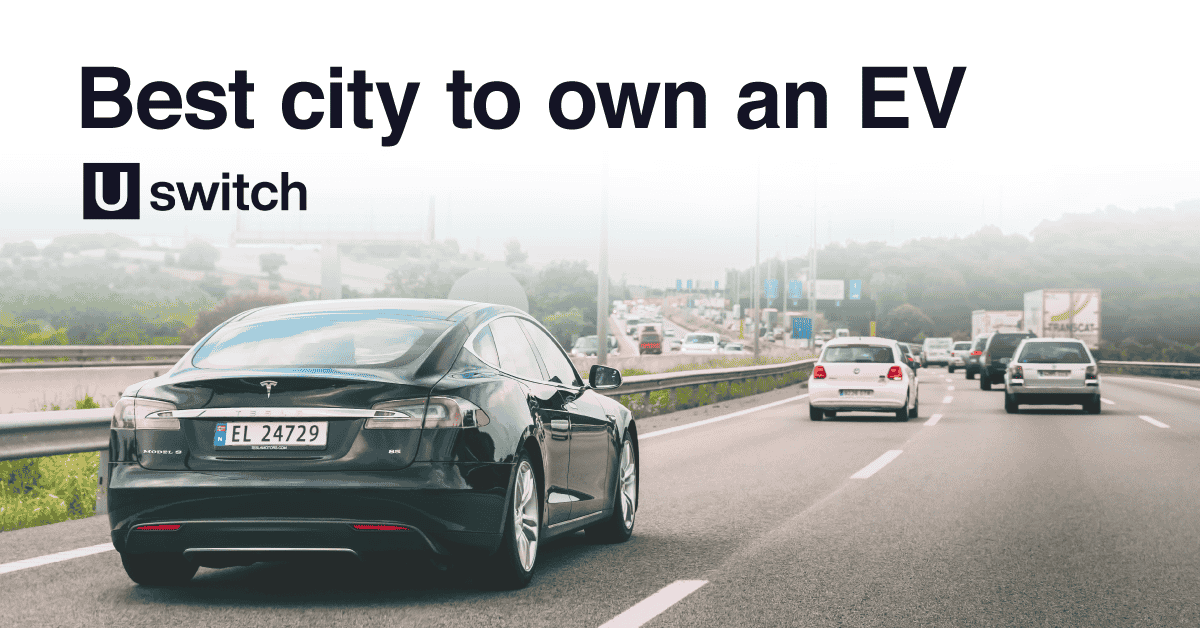 The environmental crisis has led to an increased demand for sustainable vehicles. Electric vehicles (EVs) have surged in popularity over the last decade, with a recent report finding that EV sales across Europe rose by over 1000% between 2014 and the first quarter of 2020.

With their capacity to eliminate fuel emissions and reduce air pollution, switching to an electric vehicle has numerous benefits for the planet. While the advantages of electric vehicles are well-documented, there are still many drivers hesitant to purchase an EV due to logistical concerns like cost and a perceived lack of electric car charging points.

If we are to successfully encourage more drivers to go electric, then the widespread availability of cost-effective EVs and charging stations is imperative. Home EV charging stations are an under-utilised but economical way of charging your electric vehicle at home.

The best European cities to own an electric vehicle in 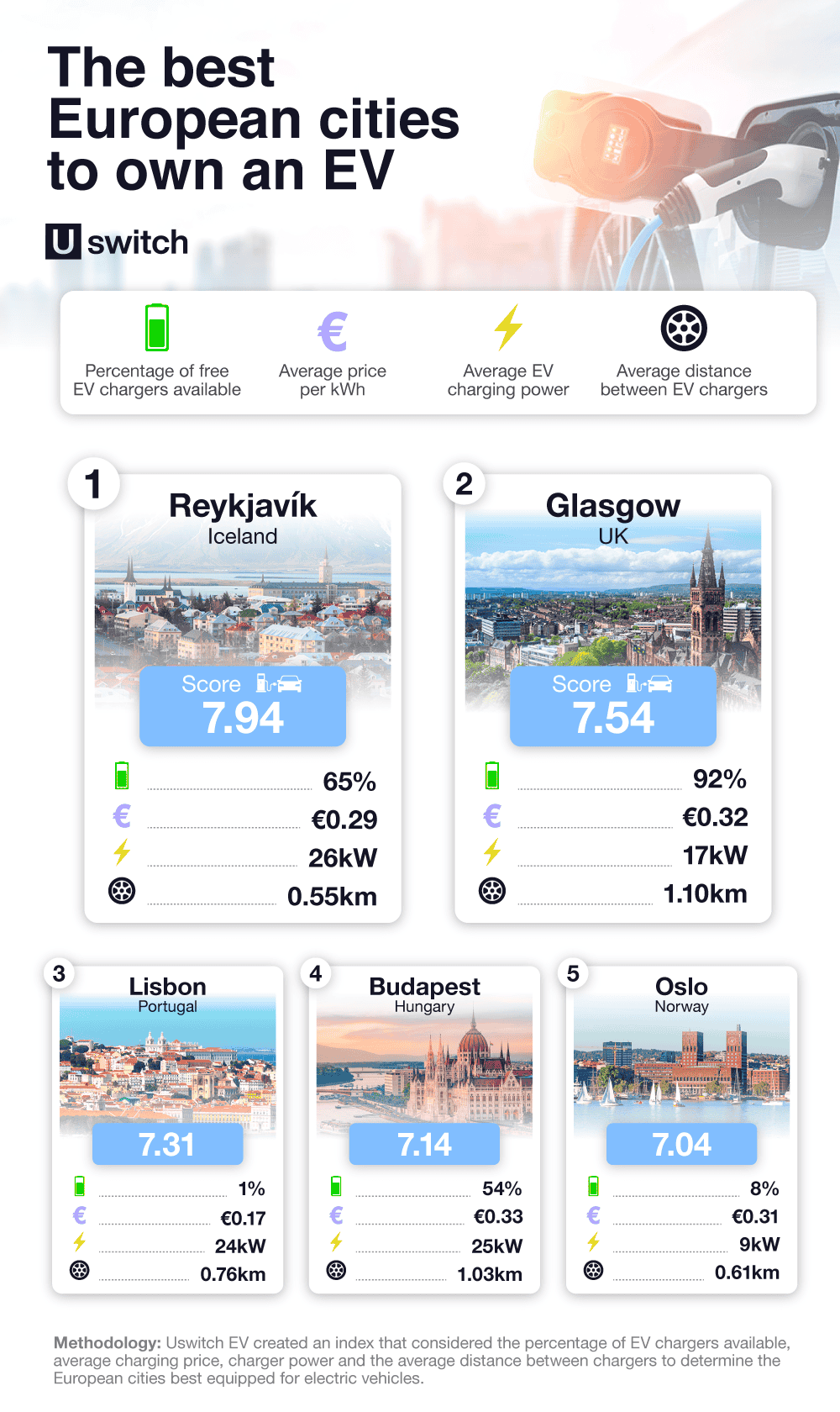 Looking at the four main categories of average charging price, average distance between chargers, average charger power, and the percentage of free electric charging points, we gave each city a combined score out of 10 to determine the best European cities to own an electric vehicle in.

With an overall score of 7.94, Icelandic capital Reykjavik was found to be the best European city in which to own an electric vehicle. Reykjavik fared well in all of our categories, with its average of just 0.55km between EV charging stations the joint second-best score on our list.

With a study best score of 92% for free chargers, Glasgow came second in our study with a final rating of 7.54. Despite obtaining high scores in most categories, Scotland’s most populated city had its score dragged down by a poor average EV charging power score of 17kWh.

Despite having a study-worst score of 1% for free chargers, Lisbon still fared strongly on our list. With excellent scores of €0.17 for average price per kWh and 0.76km for average distance between charging stations, the Portuguese capital obtained an impressive overall score of 7.31.

With a final rating of 7.14, Hungarian capital Budapest was the highest-ranked central European city. With over half of its EV charging stations found to be free and an average charging power of 25kWh, Budapest achieved solid scores in all four of our categories.

Fifth-placed Oslo is the second of three Nordic cities in our top 10. Despite a poor free charger percentage of 8%, the Norwegian capital achieved a final rating of 7.04 thanks largely to its excellent average charger distance of 0.61km.

The remainder of our top 10 is made up of Barcelona, The Hague, Prague, Antwerp, Helsinki, and Amsterdam, with the latter two sharing 10th place. Despite 60% of their electric charging points being free, Barcelona’s underwhelming charging power average of 18kWh prevented it from finishing higher on our list.

With a study best score of 0.48km for average distance between chargers, The Hague had its overall score compromised by a lowly score of 4% for free chargers. A similar story could be found with Prague, whose free charger score of 9% counterbalanced impressive results in the categories of average charger power and average charger price.

With an overall score of 6.76, Belgian capital Antwerp finished ninth in our study. Amsterdam and Helsinki finished joint 10th on our list with both receiving a final rating of 6.63.

The worst European cities to own an electric vehicle in 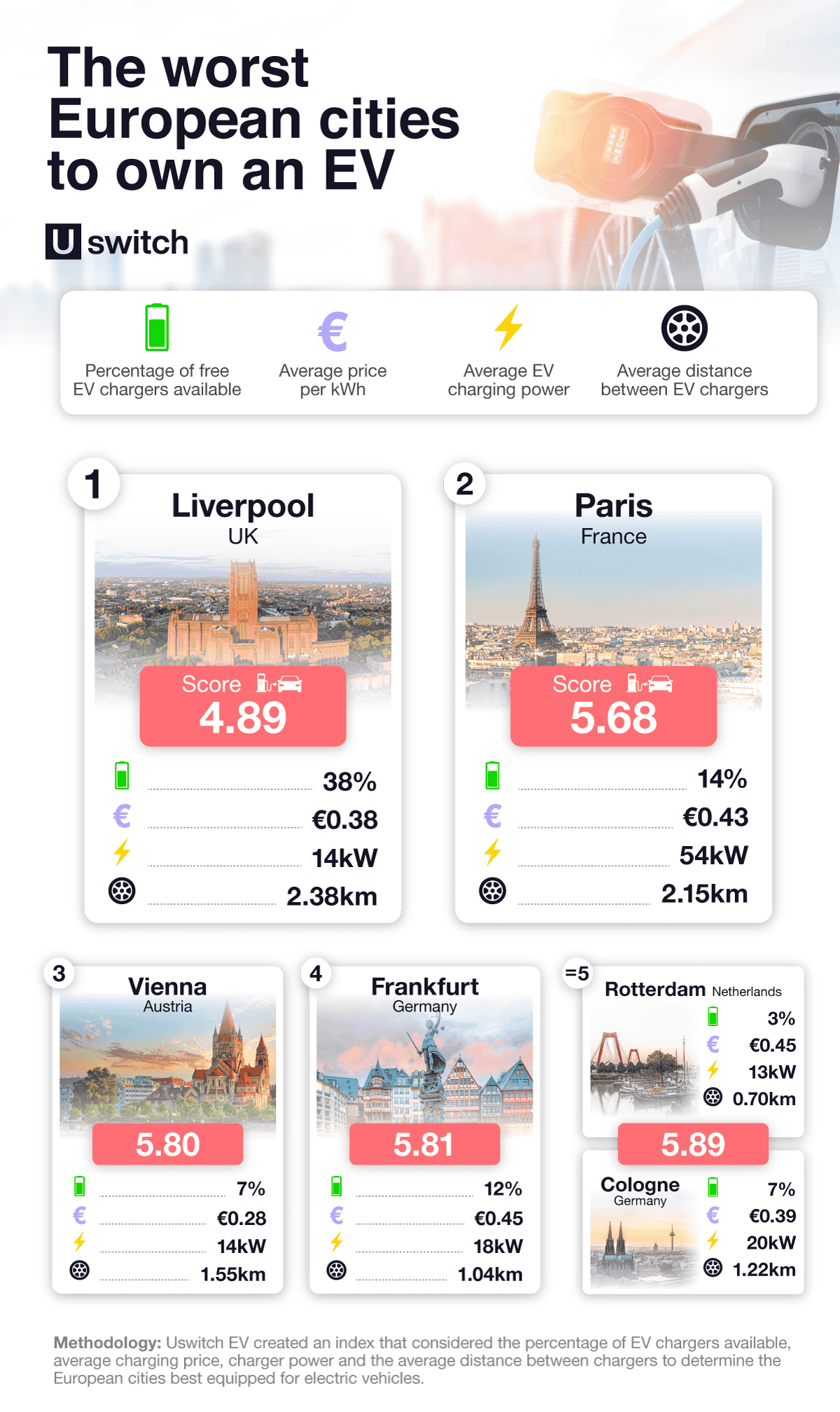 With an overall score of just 4.89, Liverpool was found to be the least EV-friendly city in our study. The Merseyside city’s average distance of 2.38km between chargers was the largest of all 33 places covered on our list.

With a score of just 14% for free chargers, the city of love could certainly do with being more charitable to its EV drivers. Despite an exceptional charger power average of 54kWh, the French capital’s overall score of 5.68 was the second-lowest on our list.

With disappointing scores for free chargers and average charger power, Vienna ranks as the third worst city for EV owners. Though Vienna achieved an impressive price average of €0.28 per kWh, the Austrian capital’s poor scores in other categories contributed to a final total of 5.80.

Frankfurt is next on our list, edging ahead of Vienna with a 5.81 rating. The city that’s home to the European Central Bank was found to be taxing towards its EV drivers, with the average charger price of €0.45 per kWH among the highest on our list.

With a free charger percentage of just 7%, Cologne is the second German city to finish in our bottom five. With an average charging cost of €0.39 per kWh and an average distance of 1.22km per charger, the West-German city received an overall score of 5.89.

Rotterdam shared fifth place with Cologne thanks to the Dutch city’s disappointing scores for free chargers and average charger power.

The final four places in our bottom 10 are Turin, Rome, Berlin, and Copenhagen. With final scores of 5.91 and 5.97 respectively, Italian cities Turin and Rome were found to be the seventh and eighth-worst cities for EV drivers.

An impressive average charger distance of 0.82km did not prevent Berlin from finishing ninth last in our study with a score of 6.03. Rounding off our list is Copenhagen, with the Danish capital’s average EV charging station distance of 2.24km contributing to a 6.21 rating.

Why should I switch to an electric vehicle?

With environmental health becoming increasingly perilous, the need to adopt more sustainable practices in our day-to-day lives has never been greater. By switching your fuel-powered car to an eco-friendly electric vehicle, you become part of the solution rather than part of the problem.

Though you may have been previously deterred by issues like cost and charger access, owning an EV in the modern day is more accessible and cost-effective than ever.

“Switching to an electric vehicle is easier than you might think. With more car options becoming available every year, going electric can be affordable and eco-friendly.

While the number of charging points in most places is increasing by the year, there are measures you can take at home so you don’t have to rely so heavily on the charging facilities in your area.

Investing in a home EV charging station is a convenient and economical way to maintain the charge of your vehicle. With so much high-quality home charging equipment now available, you can enjoy the full benefits of an EV regardless of where you live.”

Electric vehicles are exempt from both the congestion and the Ultra Low Emission (ULEZ) charges.

The EU has been quick to adapt to Electric Vehicles, with many countries set up with a good EV charging infrastructure.

According to a recent study, the top selling EV in Europe is the Tesla Model 3, which is also the most popular EV in Australia, Canada, USA and Mexico.

2. Uswitch carried out this research to determine the best European city to own an electric vehicle. The study assesses factors such as average travel distance between EV chargers, average price per kWh, number of paid vs free EV chargers, and average EV charger power.

3. Firstly, a list of 56 European cities was compiled, consisting of 31 European capital cities, along with the top 25 most populated non-capital European cities. To avoid the most populous European countries from dominating the list, a maximum of 5 cities per country were included in the list.  The boundary of each city was determined via data from the 2020 Urban Audit by GISCO, available in Eurostat.

4. EV charger information for each city’s boundary was then acquired through the OpenChargeMap (OCM) API.

Only EV chargers with data on both the number of charging bays and charging power were included. This means some cities have fewer EV chargers included in the dataset than are listed in total on OCM, due to limitations of completeness in the OCM database.

Any city which had fewer than 80 EV charger data points were excluded (23 cities), which left 33 cities in the final dataset.

5. Within the OCM data, some of the EV chargers in each city were missing data on charging cost, and these had to be manually found from various sources, including Chargeprice and directly from EV charger operator websites. These included prices were estimates, as the charging costs can vary from location to location within the same EV network, and even a single EV charging station can have varying charging prices based on the EV owner’s membership to various charging companies.

6. Some EV chargers within each city were unable to be classified into a fee type (free/paid) as their pricing data was not available. For each city, the percentage of classifiable chargers was calculated to be used later in weighting the final scores.

7. With the dataset now as complete as achievable, each target city’s EV chargers were  analysed to calculate values for the average price per kWh, average charger power in kW, and percentage of free EV chargers within the city. When applicable, the local currency was converted to euros using rates from google finance on 24/03/2022.

8. Then, for every EV charger within the target city, a route from the EV charger to its nearest neighbouring charger was generated using OpenRouteService to calculate the total journey distance between the charger and its nearest neighbour. Then using the data for all the EV chargers within the city, a value for the Average Travel Distance between Chargers was calculated for each European city.

9. Finally, using the above factors (avg. price per kWh, avg. EV charger power, free vs paid EV chargers, and avg. travel distance between EV chargers) for each city, an index score was calculated to rank each city.

The percentage of free EV chargers was given a weighting in the final score proportional to the number of classifiable chargers - the more chargers than could be classified by fee type (free or paid), the higher the percentage free chargers weighting.

The average price per kWh was given a weighting in the final score proportional to the number of free vs paid chargers - the more free chargers in a given city, the lower the price weighting.

The cities were then ranked based on their final score to create a list of the best European Cities to own an EV.