Mobile phones are a big part of everyday life, but what happens to our devices when we no longer use them?
Share this guide 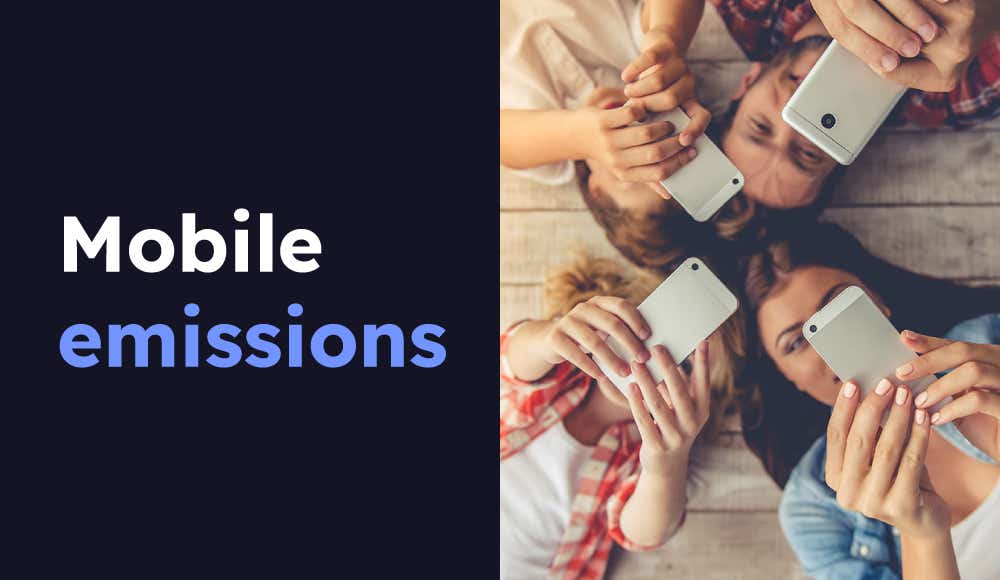 While some mobile phones are recycled, the international waste electrical and electronic equipment (WEEE) forum estimated that 5.3 billion would be thrown away in 2022.

But how much e-waste do telecom and other IT devices generate here in the UK and how does that compare to the rest of the world?

If your mobile phone deal is ending, hang on to your handset and check out our best SIM only deals.

How much e-waste is generated in the UK? 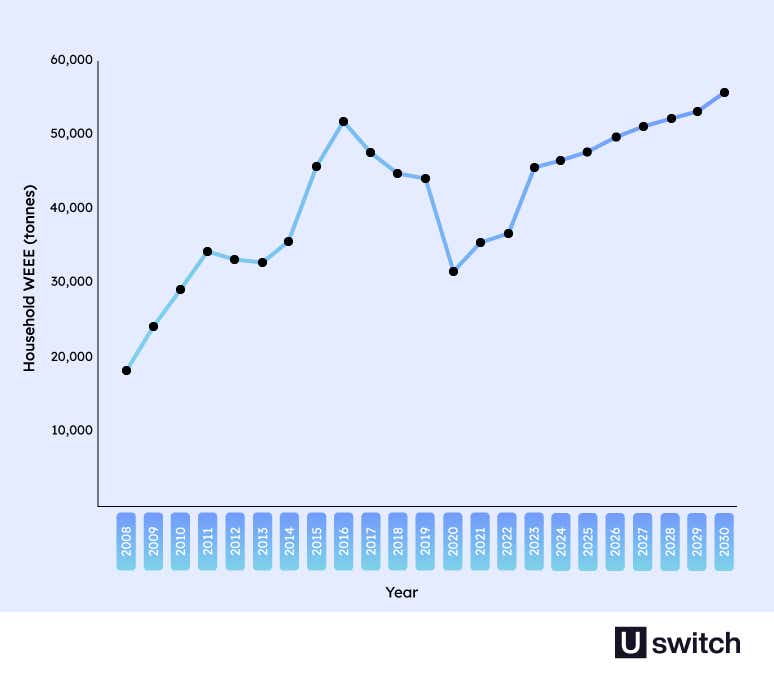 When it comes to e-waste, mobile phones fall under the category of “IT and telecoms”, alongside items such as laptops, tablet computers and fax machines.

In 2021, 36,681 tonnes of household waste electrical and electronic equipment was generated from such items, a 15% increase on 2020. However, this could actually be a slight misrepresentation, with the amount of electronic waste dropping drastically following the coronavirus pandemic.

While this started to tail off in the following years, particularly in 2020 due to the pandemic, there are signs that e-waste has started to rise once again.

This means that the number of toxic materials being released into the atmosphere via e-waste would be at an all-time high. Not only this, but it also means that we would be throwing away vast amounts of precious metals such as gold, silver, copper, platinum and aluminium.

*Estimate based on Jan to Jun 2022 figures

Which countries produce the most e-waste? 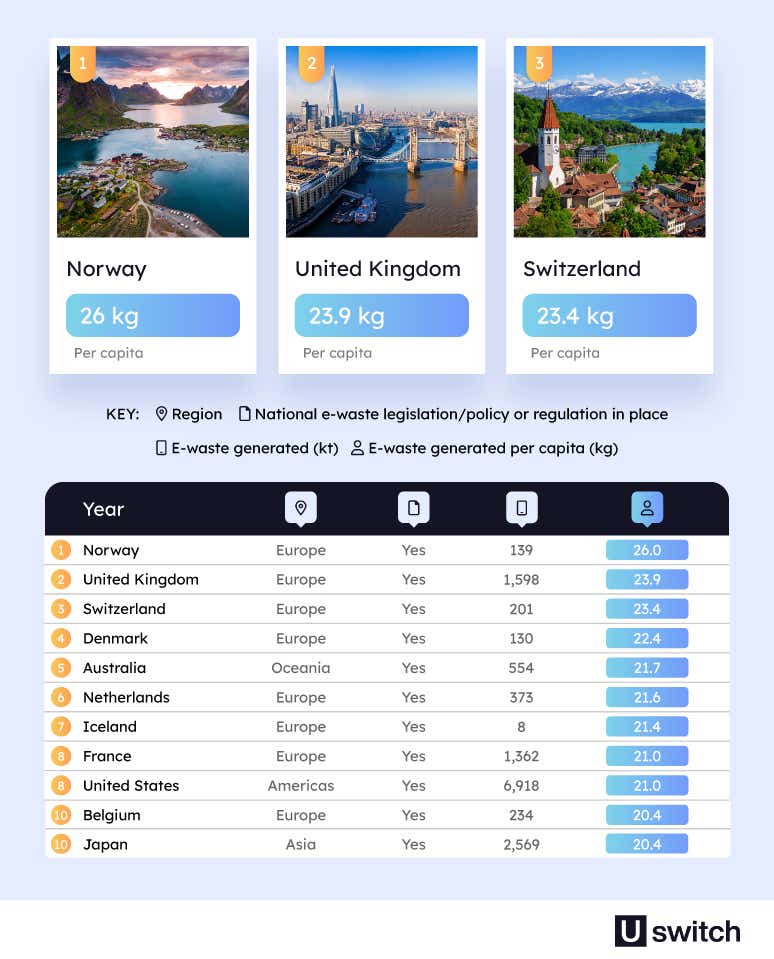 While it clearly still has some way to go, Norway has taken steps to improve its e-waste management, through a ‘take back’ scheme.

This means that companies that produce electrical or electronic equipment and batteries have to help finance the electronic waste and recycling industry.

The UK generates the second highest amount of e-waste per capita in the world, with 23.9 kg.

What’s more, recent research suggests that by 2024, the UK will overtake Norway to become the world’s biggest contributor.

It is also estimated that around 40% of the UK’s e-waste is illegally exported to be disposed of in other countries.

Not far behind the UK, producing 23.4kg per capita of e-waste is Switzerland. Like Norway, Switzerland is known for being an environmentally conscious country.

Similarly to Norway, Switzerland also has a ‘take-back’ system to encourage companies to tackle the issue. The programs benefit municipalities by lowering their overall electronic waste disposal costs and reducing the burden on landfill sites.

Switzerland has also been at the forefront of trying to prevent the exporting of e-waste to countries such as Ghana.

How much CO2 have your smartphones contributed?

Every phone that you’ve thrown away in your life has a carbon footprint and if you are eager to always have the latest handset, that footprint could be quite large.

It’s estimated that throughout its life, a smartphone produces 93 kg of CO2, which when you consider the billions of phones around the world, is a significant amount.

Not only do the carbon emissions generated from throwing away a phone contribute to climate change, but they also have multiple adverse effects on the environment.

Our carbon footprints contribute to air pollution, the acidification of the ocean (which causes acid rain), as well as melting polar ice caps and glaciers.

To find out how many kilograms of CO2 your smartphones have produced, enter the number of handsets you’ve owned in your lifetime below.

How to reduce e-waste

It’s important for us all to take steps where we can to reduce our own e-waste and reduce our impact on the earth.

1. Consider opting for a SIM only deal

Rather than buying a new phone when your contract is up, consider opting for a SIM only deal instead and stick to your current model. Not only are SIM only deals often more affordable, but they likewise help to extend a handset's lifespan.

2. Look after your phone

Endeavour to make your phone last as long as possible by looking after it and keeping it in a good condition. This could mean making sure not to overcharge the battery, keeping it clean and free of dust, or keeping it in a protective case.

If you do need to dispose of a mobile phone, consider donating or recycling it instead of throwing it away. This could mean giving the phone to a friend or family member, donating to a charity shop, or selling to a recycling service.

When you are disposing of electrical or electronic equipment and batteries, make sure that you do so responsibly and at the correct facilities. Take the time to review the user guide for your device to check how to properly dispose of it.

Visit our mobiles studies to learn more if you’re seeking for the newest mobile statistics or want to get inspiration from our experts’ research.

E-waste is a broad-ranging term that refers to any electrical or electronic equipment that is thrown away. This includes everything from mobile phones and laptops to TVs and office equipment.

Whether electrical or electronic equipment has stopped working, has become obsolete, or is simply not wanted anymore, it eventually becomes e-waste.

E-waste includes both items that are broken and those that are still working and doesn’t just refer to discarded electronic devices that are thrown into landfill.

Most e-waste currently ends up in landfills. It’s estimated that 80% goes to landfills or incinerators, with just 12.5% being recycled5.

On top of this, much of the e-waste that goes to landfills is shipped overseas to countries in Asia and Africa, where they pollute the land, air and water.

While this obviously has a negative effect on the environment it also harms the workers of the landfills and those who extract precious metals from e-waste.

Dropping off the grid