Samsung recently launched the latest version of its Galaxy FE series, the slightly cheaper alternative to its flagship handsets. According to Samsung, the FE is meant to feature the most essential parts of the famous Galaxy S range, which is why the letters stand for ‘Fan Edition’.

The S21 FE launched right at the beginning of January. That’s almost a whole year after the S21 was initially released, and as we learned recently, just one month before Samsung’s next Galaxy flagship, the S22.

So it was quite odd timing for Samsung to be releasing a brand-new phone with the S21 name. but how does it compare to its year-old sibling? And is it a worthy but more cost-effective alternative to the S22?

Find out in our review of the Samsung Galaxy S21 FE. 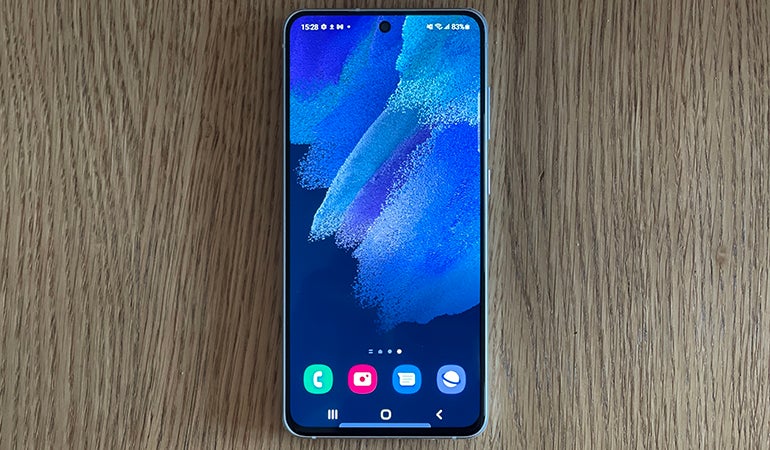 Straight out of the box, you get the familiar premium feel of a Samsung Galaxy ‘S’ handset. The S21 FE is lightweight yet robust to the touch, and its body is smooth and sleek but not slippery to hold.

Thanks to Samsung’s coined ‘glasstic’ frame, the phone has a reassuringly tough, durable, matte feel, but without the heaviness of a fully glass or ceramic body. And while smartphones aren’t usually heavy enough to weigh you down too much, the difference is quite liberating.

Samsung’s FE range is essentially a renamed version of its old Galaxy S ‘Lite’ phones, but the S21 FE is actually slightly larger and heavier than last year’s S21. So it doesn’t really feel like a ‘lite’ alternative — it’s more of a lean alternative, with just a small number of features trimmed off from the original S21.

Plus, with a price difference of just £70, it’s not too much of a surprise that the two handsets (released one year apart) seem so similar. 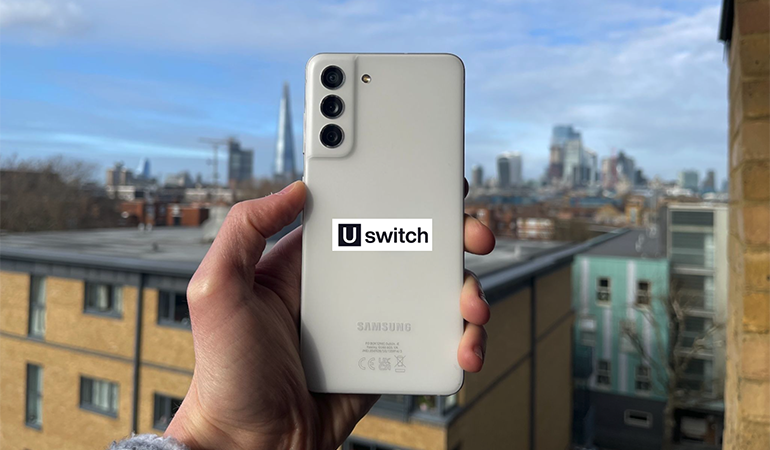 The camera array is integrated almost seamlessly into the back of the handset, with only a slightly noticeable bump to account for all the lenses. It means that it can lie pretty flat on a table (unlike many smartphones nowadays), and it’s easy to slide into your pocket or bag — no snags in sight.

There’s also quite a charming ‘ring’ around the phone for any of the colour options you choose — whether that’s the Graphite, Olive, Lavender or White version. It’s a nice bit of stylistic flair that doesn’t take up any screen space, but it gives the handset a very modern, futuristic look. We’ve come a long way from Samsung’s old ‘waterfall’ display.

The rest of the phone’s body, however, is quite minimalist. There’s no flair or interesting design on the back of the phone - just a plain block colour with Samsung’s logo towards the bottom.

Like with the S21, all the physical buttons are on the right side of the handset. Regular Samsung users are probably very used to this by now, but as a day-to-day iPhone user, I found screenshotting things a little difficult to start with. To do this, you have to press the ‘lock’ button and the ‘volume down’ button at the same time, which requires a little more work than it would if you could just press either side of the phone.

As with many smartphones nowadays, it doesn’t come with a charging brick. So you’ll either have to use an existing USB-C charging plug, or buy a new one if you want to charge it from the wall or an extension lead.

Finally, as is the case with all Samsung phones (thank the heavens), there is a hole-punch front-facing camera in the middle of the screen, so lining up selfies is super easy. 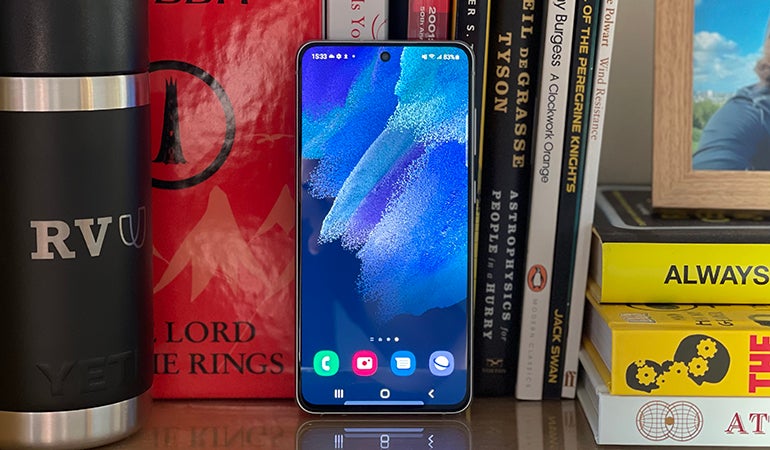 As usual for Samsung, the screen on the S21 FE is vibrant, colourful and beautifully detailed. Unlocking the phone and seeing the gorgeous wallpaper artwork for the first time was a delight, and it really helped to make the overall aesthetic of the phone even better.

It boasts all of the same display specs as the S21, except for a slightly larger screen at 6.4 inches (the S21 is 6.2). So it shares all of the following:

That means screen size, and therefore pixel density (which is the number of pixels per inch of screen) are the only slight differences between the two phones.

High-quality videos on the S21 FE look incredible. The HDR10+ technology makes colourful scenes pop and provides a highly immersive viewing experience. The 1080 x 2400 pixel resolution packs a tonne of detail into subjects and close-ups, making it feel like you’re right there in the scene.

Essentially, Samsung once again smashed it out of the park with its screen quality.

While regular Samsung users would likely be used to this, it’d be better for accessibility overall if there were labels underneath them to say what they were — the other icons above them already do. 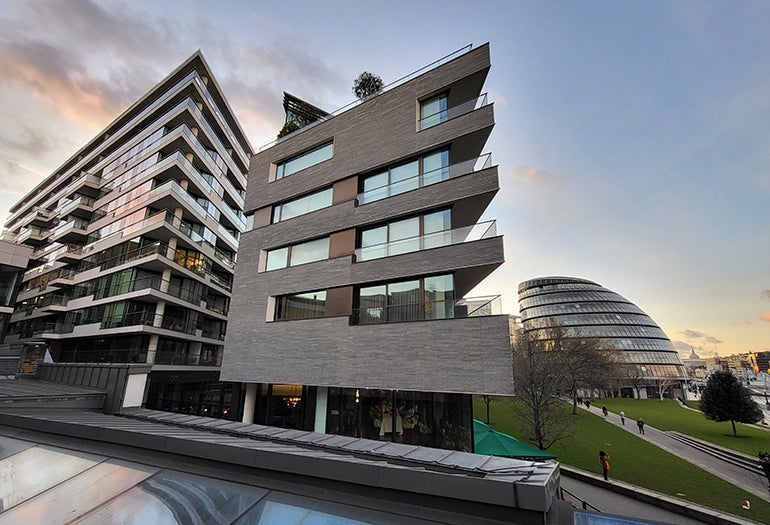 The S21 FE has four lenses in its camera array:

The S21 FE has a great point-and-shoot camera that will help you take top-notch pictures with little know-how or expertise. The camera AI deals with different kinds of light very well, adjusting what the lens takes in to capture the best image possible. 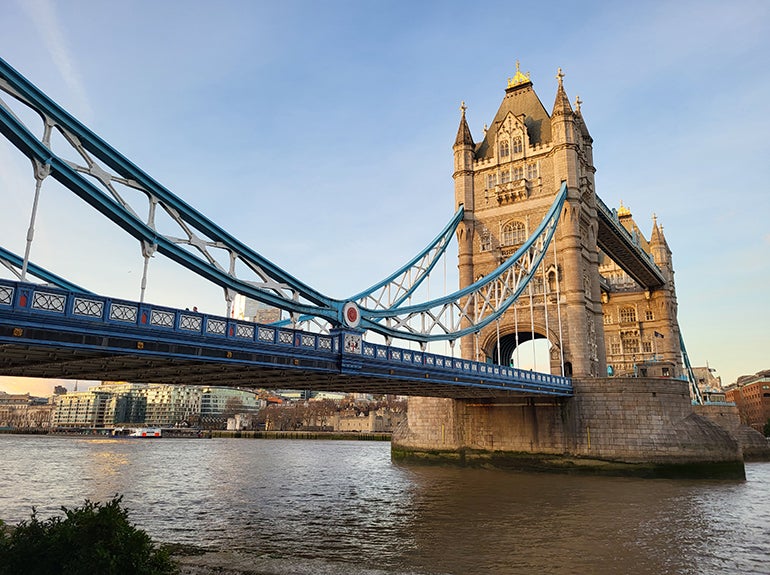 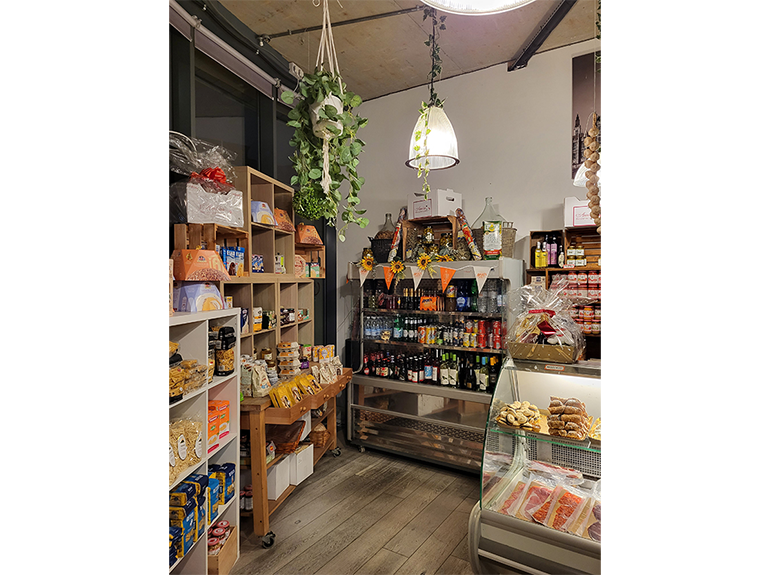 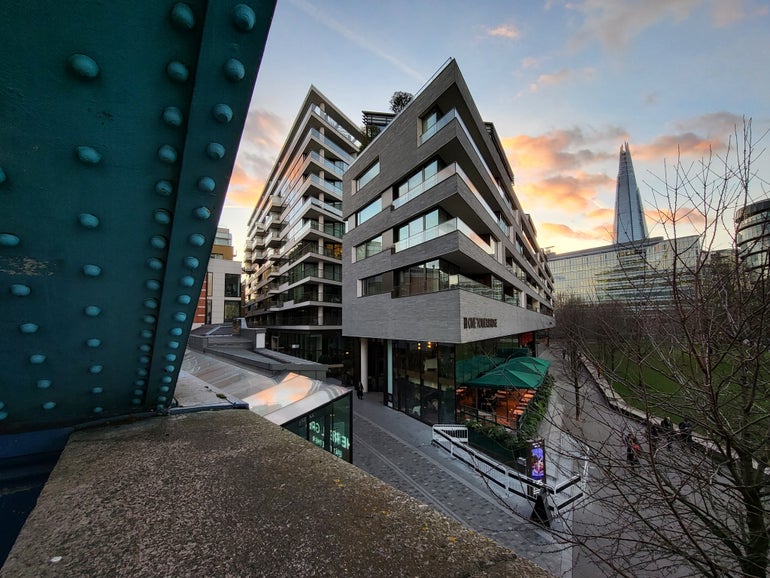 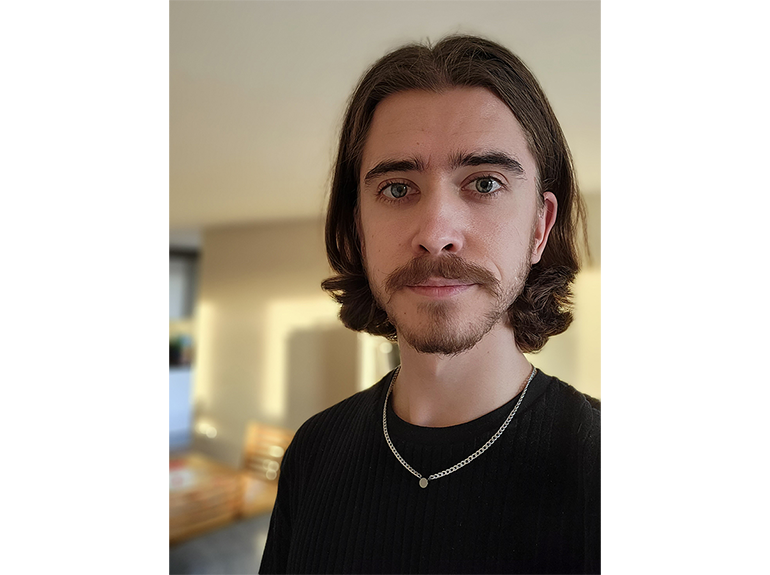 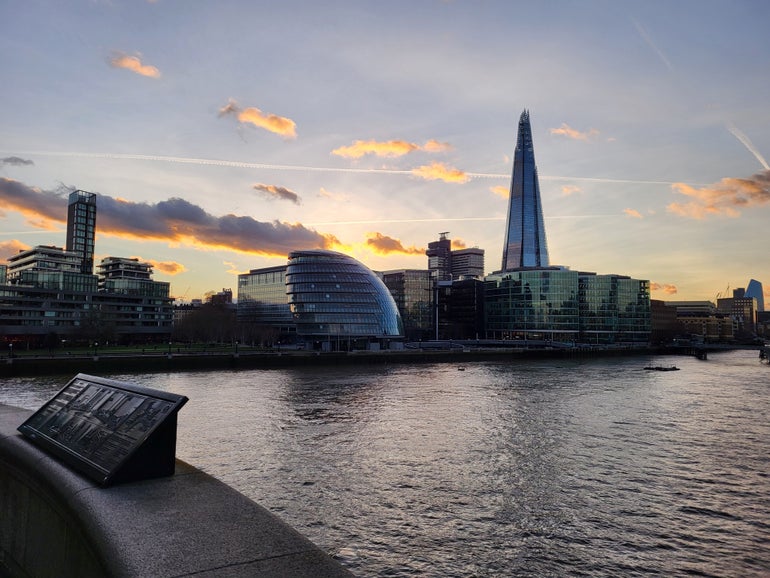 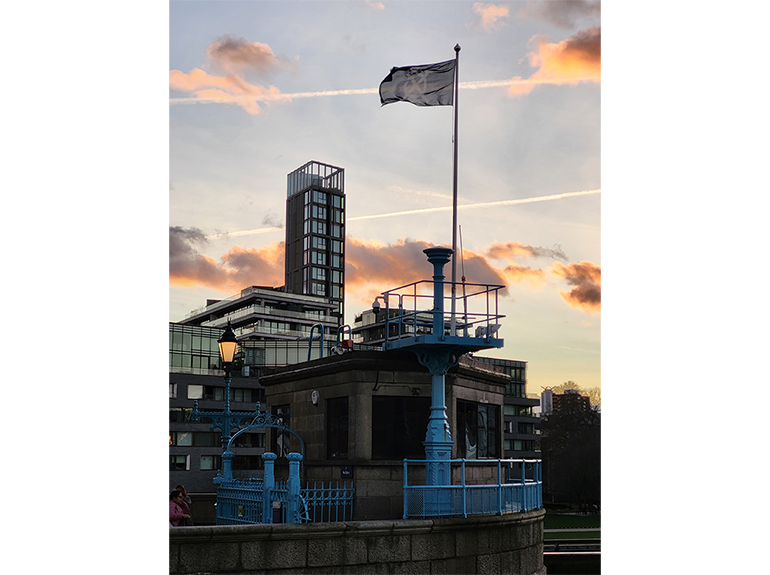 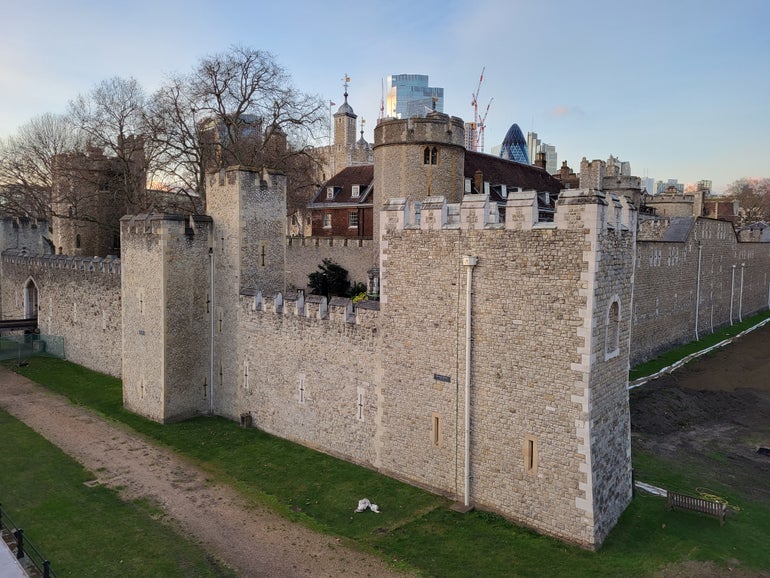 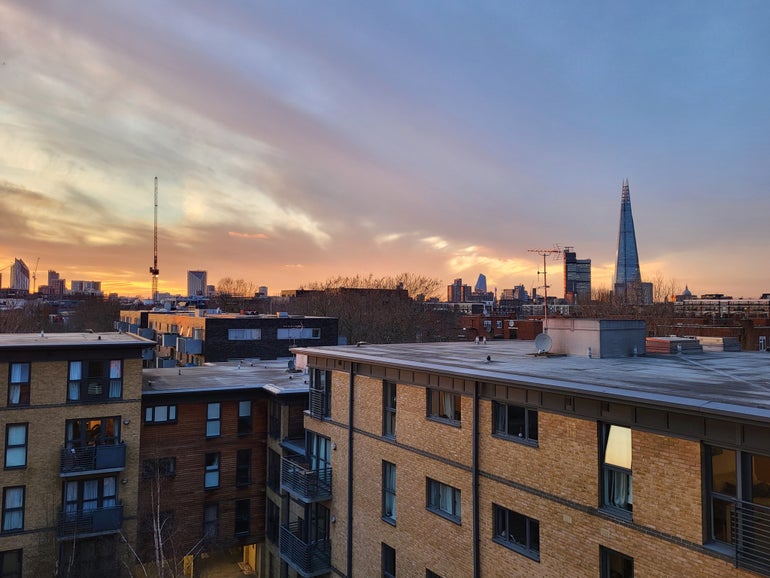 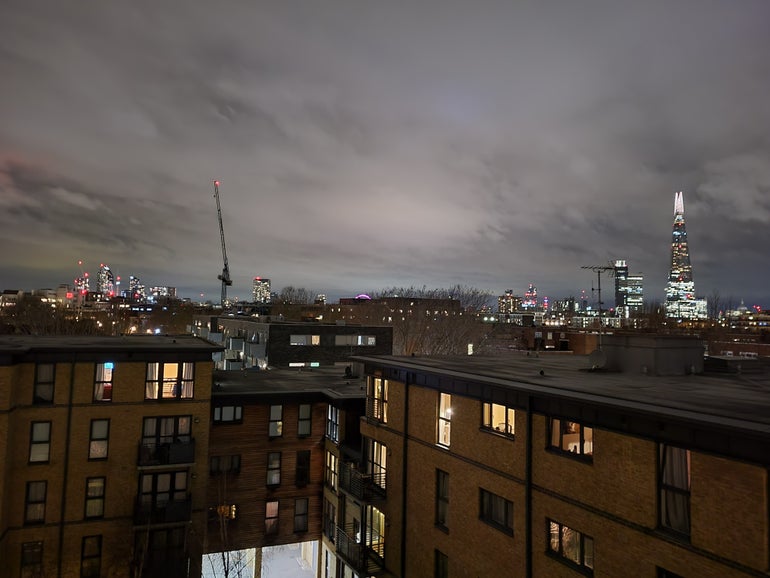 Colours, in particular, are very true-to-life and depicted very accurately. After you’ve taken a photo, Samsung’s impressive camera AI will automatically edit the scene to look as close to how it appears in front of you. So you can be sure that the great sunset you’ve just witnessed will look just as vibrant for your social media followers.

The camera setup on the S21 FE is almost identical to the standard Galaxy S21. They share all of the above cameras, and can both produce 4K video at 60fps, which is the standard quality for a flagship phone right now. The only difference is that the S21 can also produce 8K video, but given that almost all screens on the market can’t display that quality right now, it’s not a very essential feature.

So even though it’s £70 cheaper, you still get all the best elements of the S21’s brilliant camera array in the FE. 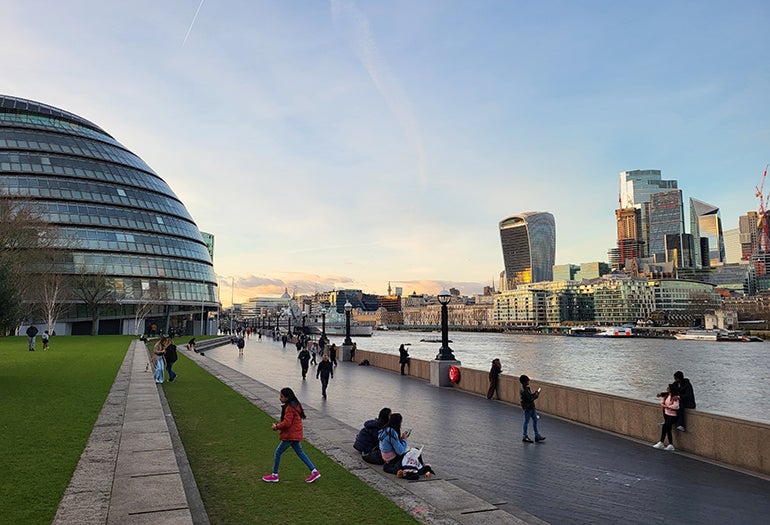 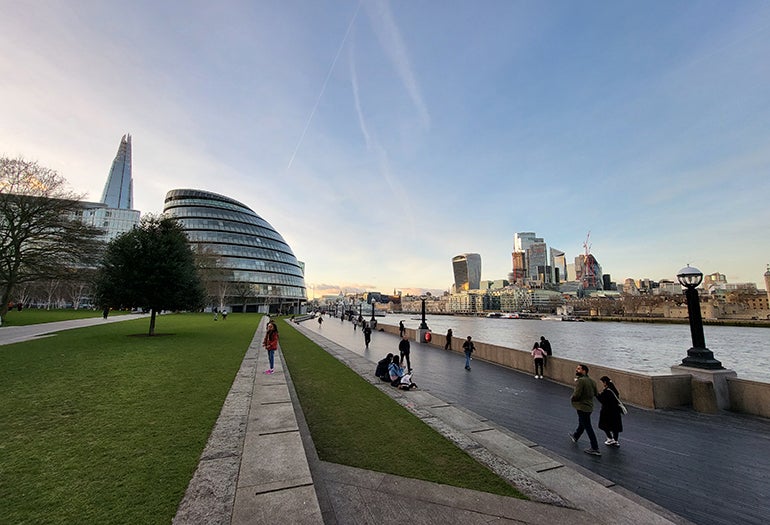 The main difference between the two is the telephoto lens, which is only 8MP compared to the S21’s 64MP. This doesn’t make a huge difference in the grand scheme of things, but it does mean that zoomed-in images on the S21 FE carry less detail and picture quality than those on the standard S21. So if that matters for you, it’s good to keep that in mind.

Check out the below pics that show off the S21 FE's zoom: 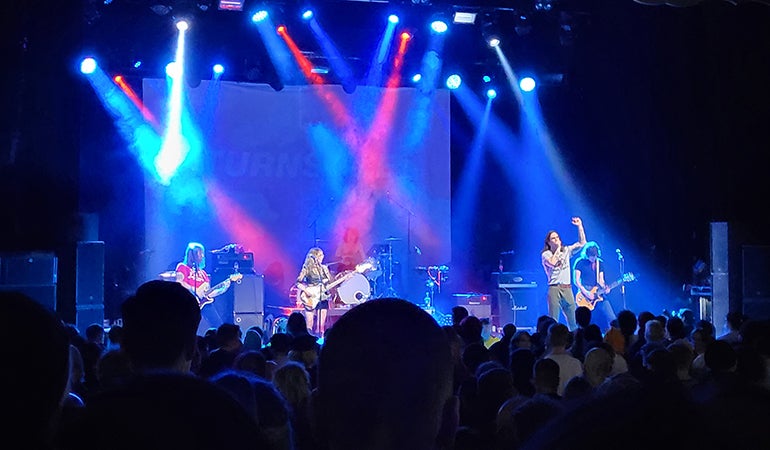 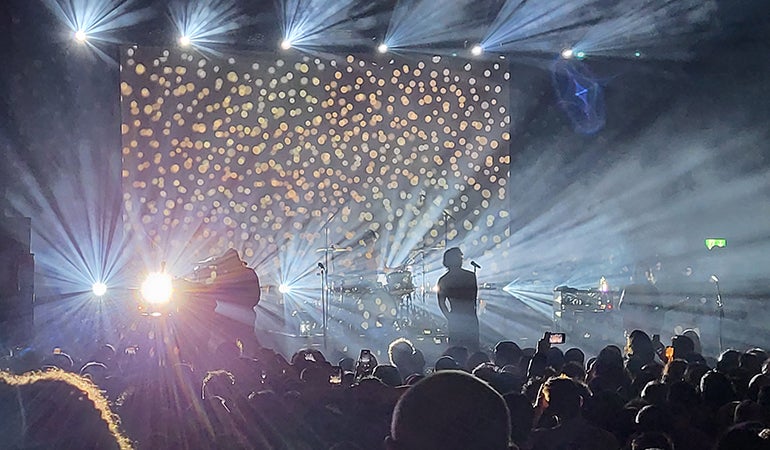 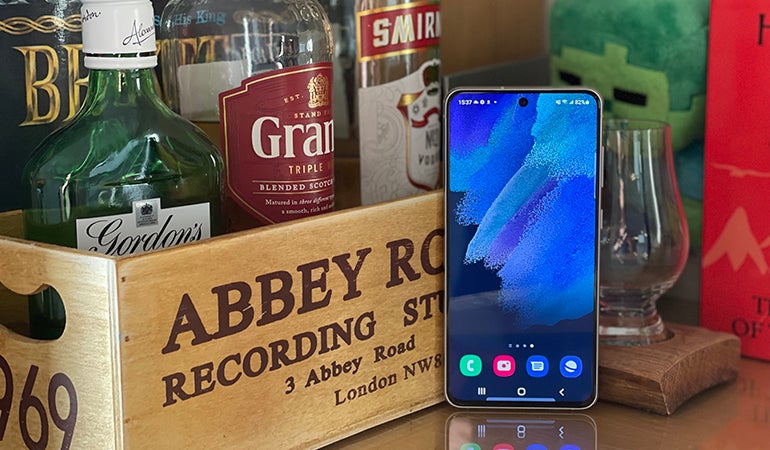 Just like with any premium Samsung smartphone, the S21 FE can handle mobile games and high-quality video with ease.

Even when playing a Netflix show in high-resolution in the corner of the screen and editing documents at the same time, there was no point where the FE struggled to keep up with it all. So if it can handle that, it should be able to smoothly run most other tasks you’d want to do.

It’s worth keeping in mind that, since this is an FE, it follows in the footsteps of Samsung’s old Galaxy ‘Lite’ phones. So it’s not meant for absolute power users who are constantly flipping between games, live streaming, photo editing, emails and regular social media posts all at once. But it’s fine for everyday use.

We can see this with the FE’s slightly less-than-premium internal specs:

And of course, the S21 FE has 5G capability. So you can take advantage of the UK’s growing ultrafast mobile internet if you live in, or are just visiting, an urban area with enough coverage.

The S21 FE has a very comparable battery to the S21. At 4500mAh, it’s slightly bigger than the S21’s, but the difference in how long it lasts is marginal. Essentially, it’ll last the full day (and potentially more) with regular use, but if you often play games or stream TV on your phone you will probably need to charge it towards the end of the day.

Usually, you can conserve battery on your smartphone by adjusting some of your screen settings, such as turning the brightness down and dialling down the screen refresh rate. Samsung really likes to brighten its screens to show off its great colour scheme, so you can turn that down in the settings to use up less power.

You can also reduce the FE’s 120Hz refresh rate to 60Hz to save battery, but you can’t choose a variable refresh rate like many other phones now offer. That’s when the screen adapts its smoothness to what is showing on-screen, which puts less stress on your battery while still giving you the maximum quality when it makes a real difference.

The FE doesn’t come with any superfast charging options, which is interesting given many more budget-friendly phones do. So you’ll have to stick to a fairly standard charging speed when plugging it in.

As is the case with the standard S21 though, you will get 15W wireless charging and a reverse wireless charging option too. So if you’re out with a friend (who also has a compatible Android phone) and their battery is running low, you can generously share some of yours. 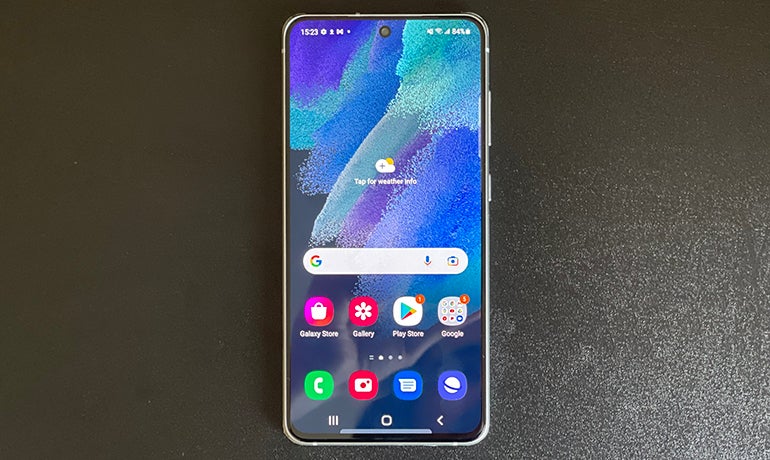 Whether you like what the S21 has to offer, but would prefer a larger screen, or you want the premium experience of a Samsung flagship, but at a slightly lower cost, the S21 FE would be a very good choice. It’s the full Galaxy S21 but without the unnecessary bells and whistles.

That’s a difference of £70 — or £5.83 a month over 12 months — for a phone that might not have all of the S21’s features, but does the most important parts to an equally impressive standard. That makes it a very enticing option, especially given the rapid rise in the cost of living that’s increasing so many of our other bills at the moment.

However, Samsung has now also released the brand-new Galaxy S22, with some fresh and upgraded features like better screen protection, a faster processor and a highly upgraded 50MP main camera. You can currently preorder it for the same price as last year's S21, so you might find that it's a more enticing option than the FE, depending on what you find important.

It's worth noting, though, that Samsung has also reduced some aspects of the S22 compared to the S21, like screen and battery size. So if these are parts of a phone that you value, you might be better sticking with the S21 FE. Learn more about the new Samsung Galaxy S22 series to find out if it's a worthy option instead of the S21 FE.

In short, the Samsung S21 FE is a cost-effective, fresh alternative to the S21 right now, and its cheaper price makes it a great consideration compared to the S22 as well.

Take a look at our Samsung Galaxy S21 FE deals on Uswitch.