The pre-orders have started to ship, the queues are forming and the iPhones are flying off the shelves. Yep the first phase of Apple’s iPhone 12 range is officially out, and all early signs point to another technological, and financial, smash hit for the kings of Cupertino.

The whole iPhone 12 range has had a redux of a redesign. Gone are the curved frames we saw on the last few models and in comes a square shape with an aluminium frame going around the handset that gives it a bit of a throwback to the iPhone 4. It looks more solid with a cool industrial vibe. And the square shape is also easier to get a good grip on too.

The iPhone 12’s 6.1-inch screen is amped up with what Apple calls SuperRetina XDR OLED tech. That means improved brightness and sharper detail than what we saw on the iPhone 11.

The iPhone 12 Pro looks even better. Both devices come with glass backs, but the Pro adds ‘surgical grade stainless steel’ to that side frame, so this is an area where the Pro’s premium chops come out. Also measuring 6.1-inches, the Pro’s SuperRetina XDR screen is bigger than last year's 5.8-inch iPhone 11 Pro.

Both screens are also reinforced with something Apple has dubbed a ‘Ceramic Shield’, a tough material that’s been developed by the expert makers of tough materials - Corning. It's said to be four times stronger than previous iPhone screens and the toughest smartphone screen available. The iPhone 12 and 12 Pro also have an IP68 rating for protection from water and dust.

We’ve got new colours to admire too. The iPhone 12 comes in black, white, blue, green and red. The iPhone 12 Pro’s are a bit more muted with graphite, silver, gold and blue on offer. It’s that blue which seems to be the ‘flagship’ colour of the year, and as you can see it looks lovely on the iPhone 12. 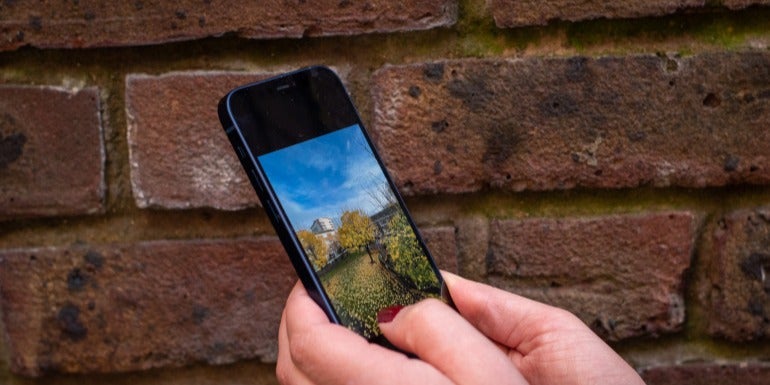 So mainly based on its premium materials, the iPhone 12 Pro comes out on top. But to look at that plainly does a disservice to the iPhone 12 - the differences are smaller compared to previous models especially with the inclusion of a glass back. 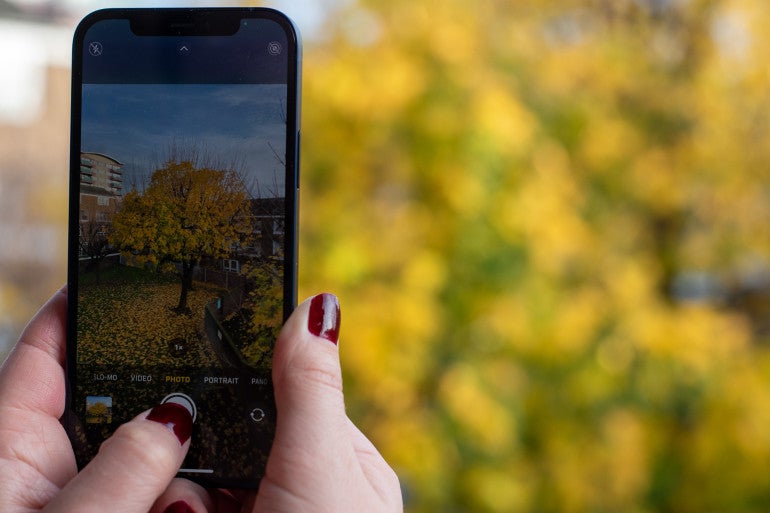 If things are looking pretty similar so far, the camera is a feature where the Pro pulls away. The iPhone 12, just like the iPhone 11, has a dual-camera set up and the iPhone 12 Pro goes one better with a triple camera set up. However, the standard 12 does have both wide and ultra wide lenses to give really varied photos, which will be more than enough for many mobile camera enthusiasts.

Like last year, the iPhone 12 has two 12MP cameras on the back, with wide and ultra wide capabilities, but that doesn’t mean the cameras haven’t been improved.

The iPhone 12 gives you better low light performance, a wider aperture, and is able to bring out more detail with its HDR technology.

Apple's already excellent night mode has also been improved - there's even night mode on the front camera so your night time selfies will no longer need to be flash assisted. And let’s be honest, no one ever liked that front camera flash.

Last year’s iPhones only offered night mode on the main camera, but now you can take incredibly clear photos after dark with every lens - whether it’s wide, ultrawide, telephoto or even the selfie camera.

And there's a night mode aperture mode for creating some cool imaging effects.

The iPhone 12 Pro adds in a telephoto lens as well as advanced Optical Image Stabilisation and Deep Fusion image processing to get even more detail in your photos.

The Pro takes another step up with the addition of a LiDAR sensor. LiDAR is a scanner that adds even more detail to night mode photos, and it’s also used for augmented reality and depth perception.

If you’re out to make a movie, you’ll be pleased to know both new iPhones support 4K HDR video recording, with the 12 Pro even able to record Dolby Vision 4K HDR at 60fps.

So with that in mind, the iPhone 12 Pro comes out on top - whilst it’s not a huge difference, the camera is better especially with the inclusion of a telephoto lens. If top quality photos are what you want, go for the Pro.

Here's an in-depth review of the iPhone 12 Pro

Apple’s big and powerful A14 Bionic processor is behind the screen on both the iPhone 12 and 12 Pro. So whether it’s loading up an app, processing an image or playing a game - everything is smoother and faster than any previous iPhone.

It’s not necessarily something you’ll notice all the time, and you’ll probably just get used to how fast everything works, but the A14 Bionic chip really is a serious upgrade as all that behind-the-scenes work gets done incredibly efficiently. And to have it on both the iPhone 12 and the 12 Pro makes it even harder to separate these two devices.

And then there’s the big new feature - 5G. After holding out while other brands jumped in, Apple has finally stepped into the 5G arena, and unlike some manufacturers who offer only certain models in 5G, all of Apple’s new iPhones have 5G.

So providing you’re signed up to a 5G data plan you’ll get the same superfast browsing, downloading and streaming no matter which iPhone 12 you buy.

5G is much, much faster than 4G, you can download films in seconds, web pages load up quicker than you can open a new tab and online gaming is smooth as can be. 5G is not available in all areas, and we haven’t had a huge amount of time to test its impact, but a quick speed test shows that it's a considerable leap from 4G here in north London. 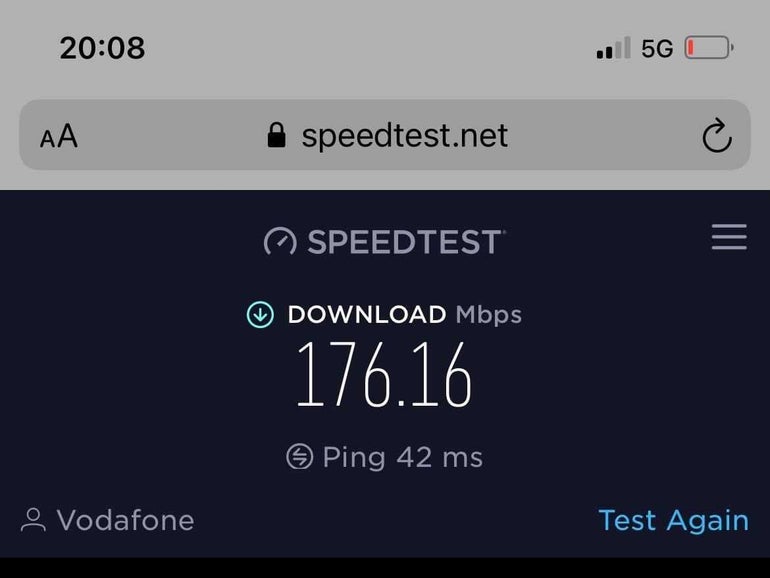 What’s in the box

This year, Apple’s made a big noise about reducing its packaging to make it more eco friendly, and what we have got is a considerably smaller box.

Compare the new boxes to last year’s iPhone 11 box and it’s less than half the size, which is seriously going to reduce Apple's carbon footprint.

However, this reduced packaging has come at a cost. You will no longer get a charging plug or headphones with your iPhone, all you get is a USB charging cable. Now, with no headphone jack the norm, a lack of wired headphones is no huge loss, but some may lament the lack of a mains plug. But the chances are you do already have a plug so perhaps this is another Apple change that people forget about in a few months. 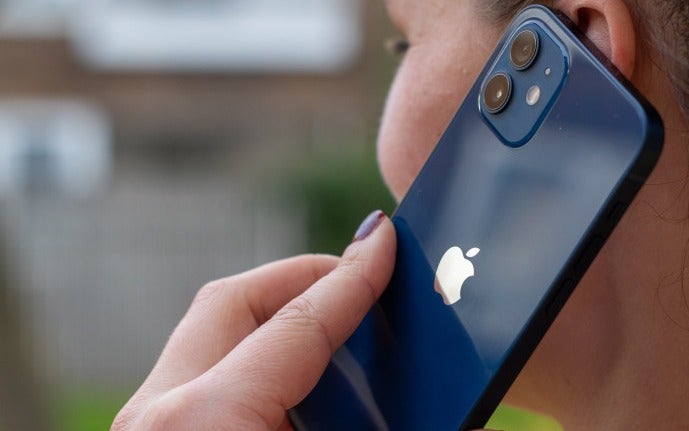 There’s no doubt that the new iPhone 12 range is exciting. We’ve got new designs, new colours, new 5G, new boxes, new everything (well not quite everything but you get the idea). But which one is right for you?

The iPhone 12 Pro starts off at £999 SIM free, and as far as premium phones go - it’s easily one of the best you can buy. Apple has gone all out with design, materials, camera specs - the works. It looks great, it feels great, it works great. It’s great. If you want the best phone you can buy go for the Pro, no doubt.

But, the iPhone 12 is more of a competitor than previous entry iPhones. Considerably so, in fact. It’s got the same OLED screen, it’s the same size, it’s got an incredibly similar design, and the only things that it’s missing out on are the flashier materials and a slightly downgraded camera array.

The iPhone 12 starts off at £799 SIM free, so a reduction of £200 for all that phone is a fantastic deal, especially when you think about the savings you’ll get on a pay monthly plan compared to the Pro.

Get the iPhone 12 on a great deal today

Prefer the iPhone 12 Pro? We've got great deals for that too