YouView boxes come with all BT TV packages. Read our BT YouView+ box review to find out how to make the most of your new set-top box.
Share this guide 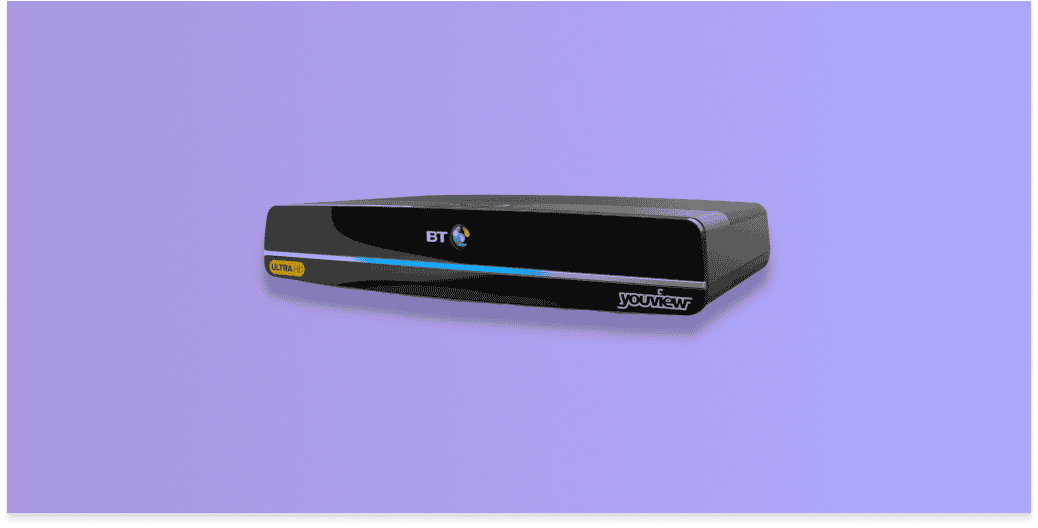 Every BT TV package comes with a YouView set-top box. We’ve reviewed the YouView+ box to give you our take on it, plus some tips and tricks to get the most out of your set-top box.

BT’s YouView boxes let you seamlessly watch live or on-demand TV across multiple services, including Netflix, iPlayer and NOW. You can also buy or rent the latest films and box sets from the BT TV Store.

So, the BT YouView+ set-top box probably isn’t going to win any beauty contests anytime soon. It’s a generic black box with a light to indicate when it’s switched on (blue), recording (red) or on standby (purple).

It’ averages 23.7cm long, so it should fit into most TV cabinets and will blend in nicely with whatever devices, set-top boxes, games consoles or media players you keep plugged in.

If you haven’t bought a new TV in a few years, or you haven’t got a streaming stick yet, the BT TV remote will feel on the larger side of standard size. But if you’re used to, say, an Amazon Fire Stick or a Sky Q remote, the BT one will feel unnecessarily cumbersome.

And, unlike a lot of other modern remotes, it doesn’t have a voice search feature. It does have plenty of other buttons though- perhaps too many.

In short, it looks more like a TV remote from 20 years ago than one you would expect to see nowadays. But it still does the job.

What’s the difference between BT YouView and YouView+?

The YouView box you get depends on which BT TV package you sign up for.

Sign up for BT’s Starter + BT Sport package and you’ll get the basic YouView set-top box. This means you will be able to watch on-demand and catch-up TV, plus pause and rewind live TV, but you can’t record any TV on your box.

BT’s Entertainment Bundle, meanwhile, comes with the YouView+ box, which does let you record TV — up to 300 hours of it, in fact. The top-tier box, the YouView+ Ultra HD box also allows you to watch programmes in UHD or 4K quality, which neither of the other boxes support.

For this review, we're looking at the YouView+ box. Although we didn't get a chance to get hands on with the UHD version, it's identical to the YouView+ aside from the improved image quality.

BT TV is easy enough to navigate, although, like we mentioned before, there is no voice search function. So you have to find your way around using the buttons on the clunky remote control.

However, as with a lot of TV services, it’s not always easy to tell what on-demand content is included in your package and what you need to pay extra for.

The YouView boxes have a comprehensive, global search feature with a bright menu that's easy to read which displays as a small, visual guide under live TV. The main areas are: 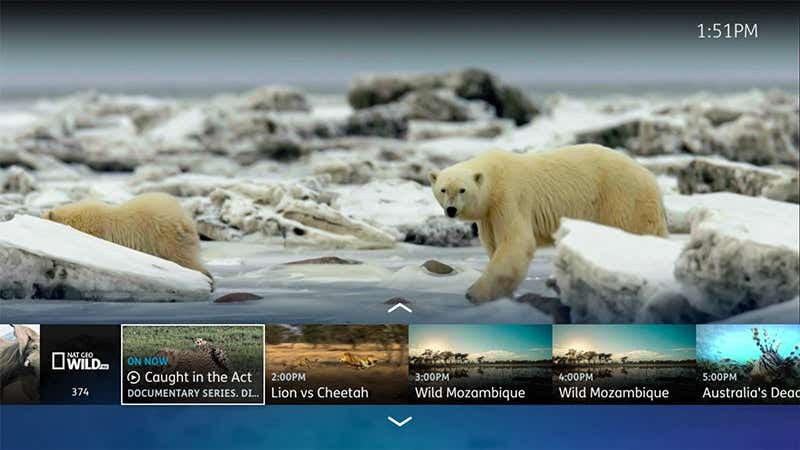 Despite numerous VOD options, most of us sit down to watch live TV when we turn on the telly, which is why it’s the first thing in BT’s new menu.

The guide has two formats: mini and regular. The mini guide displays image tiles of what’s currently on TV. A more traditional, full-screen program guide is available, too, which displays what’s currently on, what’s coming up and what was previously on TV.

You can scroll backwards in the guide to see programmes that aired up to one week ago. Through this backwards scrolling, you can access individual programmes available on-demand through the guide itself rather than searching across different players and apps.

The guide can also display channels by theme or type — for example, kids programming, sports channels or pay TV — to make it even easier to find what you want to watch.

And depending on what you’re into, the content can be well worth watching. After all, at the time of writing, it’s the only place where you can watch the Champions League, and it has an excellent selection of Premier League fixtures. Lockdown certainly would have been a lot tougher had we not had BT Sport.

Having said that, it definitely has an interesting lineup for its daytime programming. I had BT Sport in the background as I wrote this and watched televised fishing, followed by what appeared to be a strip version of Rock, Paper, Scissors (yes, really). 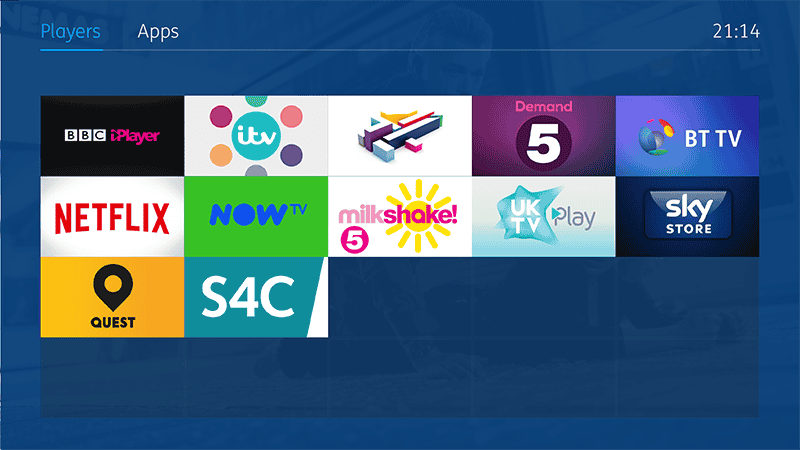 This section is where you can access on-demand and catch-up content, including TV series, films and music videos. All the major catch-up services are here, including BBC iPlayer, All 4, ITV Hub and more.

You can also watch Netflix and NOW from here, too.

My TV Store is where you can find your recordings. The mini menu displays your most recent recordings, and the full list is accessible in the expanded menu.

Recordings are displayed in chronological order, and series are grouped together, making it easier to sit down for a binge-watch. You can also lock or unlock programmes in this section, which will save them from being deleted automatically. 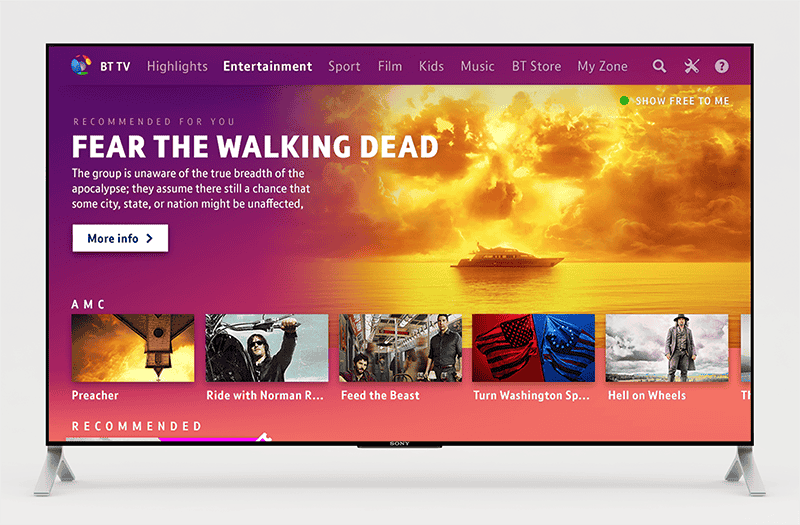 BT Player is where you can access content you’ve subscribed to like BT Sport, as well as buy or rent new releases. You can also upgrade your subscription in this section, too.

The BT TV Store makes it easy to see what’s available for free and what you have to pay for by adding a ticket next to titles that aren’t included in your subscription. If you only want to see free content, you can change the settings by hitting the green button at the top, so only free items will be displayed.

Anything from the store you’ve 'favourited', watched, bought or rented in the past is available in My Zone, so you can see your viewing history.

Head to this section if you need to change any settings on your YouView+, including menu display options to make it easier to use your box if you have any visual impairments. You can also set parental controls here, which will take effect across all players, apps and recordings.

As more of us move toward watching TV series and other on-demand content across multiple platforms and services, TV providers are recognising that we need more comprehensive search — and BT’s search function allows for just that.

Type in the name of what you’re looking for, and the YouView will search across live TV and all available on-demand content from players (including Netflix and NOW), apps and the BT TV store. Results are clearly labelled as “free,” “buy” or “subscription” to avoid any bill shocks or disappointment.

The BT TV app lets you take your TV to go, in a way. You can access some live and on-demand content, plus set recordings for your YouView+ box through the TV guide. (This currently has about a 15-minute delay, however, so don’t cut it too close.)

You can also watch recordings from where you left off or add shows to your favourites list to watch later, although offline viewing isn’t currently available.

BT TV supports ultra HD and the image quality is crystal clear. When watching football, the image is noticeably sharp and the colours are vibrant. The only slight issue I’ve found is that the sound doesn’t always perfectly sync up with the images. But it usually rights itself pretty quickly and the overall viewing quality is excellent.

If you’re a football fan, BT Sport is a must-have, particularly if your team is likely to get into the Champions League (not something us Saints FC fans have to consider, but it’s something my Chelsea fan husband needs to watch). BT TV is still the cheapest way to watch football on TV, but aside from that, BT TV isn’t strictly necessary.

If you get it as part of your broadband package, then it’s well worth having. But it’s not always that user-friendly and it can be a bit glitchy.

It’s also important to bear in mind that the BT YouView+ set-top box is only available to BT broadband customers.

Take a look at our best BT broadband deals.