Ofcom has released its latest broadband complaints report, revealing which providers performed best and worst according to their customers between October and December 2021.

The ranking of providers by their complaints is a very clear sign of which broadband and TV suppliers appear to have the best customer service. But it also highlights which ones customers seemed to be the most unhappy with.

If your broadband provider has recently increased your prices and you’re looking to switch elsewhere, it’s worth considering one that offers a smooth, hassle-free customer experience.

Find out which providers came out on top in the latest Ofcom complaints rankings.

Sky, EE and BT get the fewest broadband complaints (again)

The best-performing providers in the broadband complaints rankings continue to be Sky, EE and BT.

Not only is it reassuring to see a provider like Sky receive the lowest number of complaints, but it’s even more impressive to see it consistently receive the lowest. It shows that Sky’s score isn’t just a one-off, and that the provider can be trusted to offer a great service from start to finish.

Broadband price rises have had a big impact on customers since the start of 2022. All four of these providers increased their mid-contract prices by as much as 9.3% this spring, showing that even with a favourable customer service, it’s hard to avoid an expensive bill hike.

But while Sky broadband increased its costs this April, it handles price rises a little differently to the other top performers. Rather than keeping its customers locked in until the end of their contract, the provider allows affected customers to cancel their contract early completely free of charge, as long as they do so within 30 days of being notified of a price increase.

So if you’re looking to avoid unexpected hikes halfway through your contract, Sky makes it easier to keep your bills down by letting you search elsewhere. Find out which other providers let you leave your contract early — and which ones don’t — in our guide to mid-contract price rises. 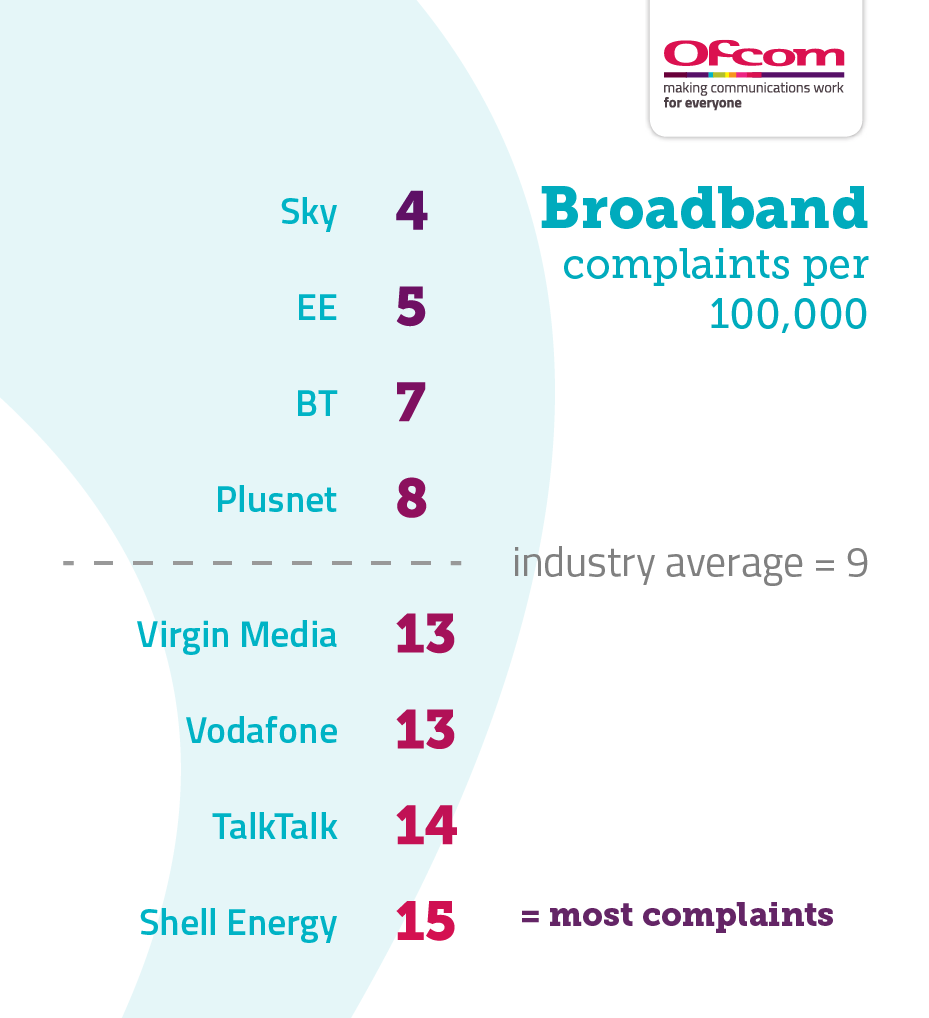 While Shell Energy Broadband and TalkTalk both received fewer complaints than the previous report, they continued to receive more than any other provider in Ofcom’s rankings.

Shell was the worst performer this time, scoring 15 complaints against the industry average of nine per 100,000. And TalkTalk came in just behind with 14 complaints.

Notably, Vodafone was the only provider to see its complaints increase in the latest report, slightly jumping from 12 in the third quarter of 2021 to 13 in the fourth quarter. Virgin Media saw its complaints decrease to 13, but that still puts it above the average for this period.

High complaints scores in the Ofcom rankings doesn’t necessarily mean that these providers offer a bad service. The vast majority of customers likely have a great experience with them, and you should still consider signing up to their deals if they offer the right service for your needs.

But if customer service trumps all else for you, and you want as smooth and painless an experience with your broadband as possible, this data should help you decide where to look.

Sky get the fewest pay-TV Ofcom complaints too 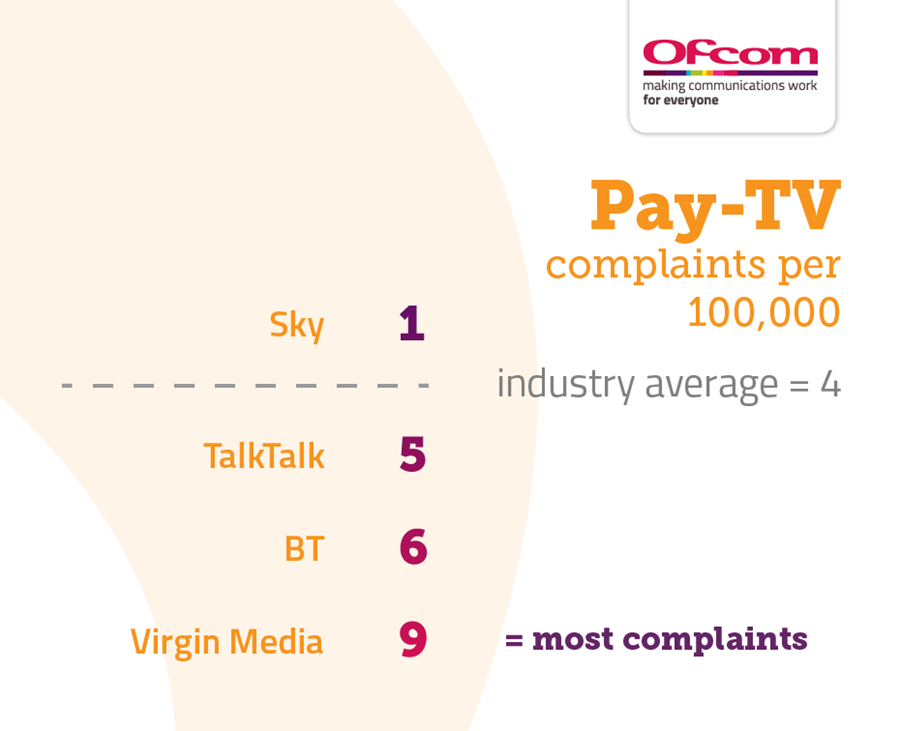 The Ofcom complaints report doesn’t just look at broadband. It also ranks the main TV providers in the UK to see which companies cause the fewest issues for customers.

Unsurprisingly, Sky TV received the least amount of grief in the TV sector too, once again getting just one complaint per 100,000 customers. It was the only TV provider to score below the industry average of three complaints, with TalkTalk, BT and Virgin Media receiving three, four and seven complaints, respectively.

That said, all three of these providers were able to reduce their complaints by two per 100,000 between Q3 and Q4 of 2021, so it’s promising to see a marked improvement in their performance.

I’m not happy with my broadband provider — what should I do?

If you’re having trouble with your broadband service, there are a few things you can do to help improve it.

Firstly, there are a number of simple solutions you could try with your home setup to make your broadband connection a lot stronger. Take a look at our guide on improving a slow internet connection to see how you can speed up your internet at home.

If your problem can only be resolved by your provider, contact its customer service team. Our guide on how to complain to your broadband provider will help you get your issue resolved quickly.

Finally, you should check when your broadband contract is due to expire. If your end date is approaching (or has already passed), you might be able to switch to another broadband provider with just one month’s notice. That way, you can try a new service that could work a lot better for you.

“Today’s figures show an overall decline in the number of complaints made to telecom providers in the last quarter of 2021, which is welcome news. Yet since then, prices have increased significantly across broadband, mobile and pay-TV services, so it’s likely that this trend could change in the coming months, with many consumers unhappy with recent bill hikes.

“Shell Energy continues to be the worst performer on customer service, with complaints for its broadband offering well above the national average. Among the largest providers on the market, TalkTalk and Vodafone in particular have their work cut out to reduce their share of dissatisfied customers.

“When it comes to mobile services it is disappointing to see Virgin Mobile customers are experiencing the most problems, especially as Virgin Media is also above the industry average for broadband complaints.

“With budgets being squeezed more than ever before, providers need to not only offer products which are good value for money, but prove that they are genuinely focussed on delivering customer satisfaction.”