What is gigabit internet and do I need it? 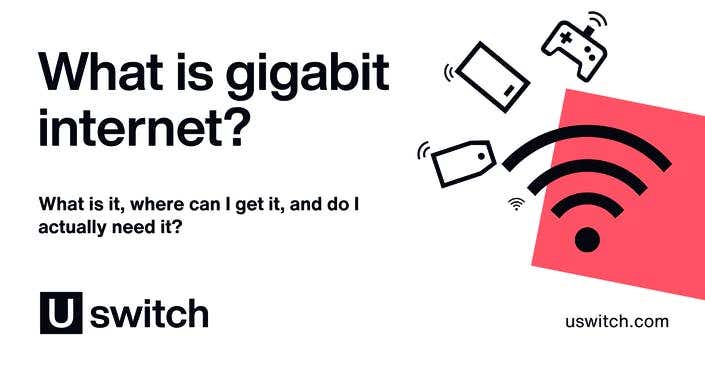 Broadband connections are getting faster each year and the next step in home broadband is the jump to gigabit speeds. With superfast speeds available to 96% of the UK, the majority of UK households can now receive broadband speeds over 60Mbps.

But if you’re lucky enough to live in a location with full fibre broadband, you could access speeds nearing 1,000Mbps with gigabit internet, the fastest level of broadband available.

What is gigabit internet?

Gigabit internet delivers download speeds of up to 1Gbps, the equivalent of 1,000Mbps. These kinds of speeds are typically only available in locations with fibre-to-the-premises (FTTP), commonly known as ‘full fibre’ connections. This is when the connection between your provider, the network and your home is completed entirely using fibre-optic cables rather than copper phone lines.

Read our guide on full fibre to learn more.

You can also get access to gigabit speeds via specially adapted cable broadband connections from Virgin Media. DOCSIS 3.1 technology means that gigabit speeds are available over the coaxial cables used in Virgin Media’s cable broadband networks in specific locations. However, the biggest difference between FTTP gigabit internet and cable gigabit internet is the significant disparity between upload and download speeds, with uploads often limited to just 35Mbps.

What can I do with gigabit internet speeds?

Obviously the higher your download speed, the faster you can download files and the better quality you can stream smoothly, and gigabit internet offers speeds ten times faster than average superfast broadband. There are a few key instances when this incredible speed can be incredibly useful.

The largest files most of us utilise each day are video files, and so streaming video, whether that’s Netflix, YouTube or Disney Plus, is where you’ll see some of the most noticeable increases in performance when you have gigabit internet. This is especially true when streaming in 4K, which uses four or five times as much bandwidth as streaming in 1080p.

By itself, 4K streaming shouldn’t be a problem for most superfast fibre broadband connections, the problem comes when there are multiple users in one household. With two or three people using 4K devices in your home, even a 100Mbps connection can get clogged up pretty quickly, leaving not much bandwidth for anything else.

So if you have a household full of devices, gigabit internet is sure to give you plenty of spare bandwidth no matter who’s streaming what.

There are few things more frustrating when gaming online than ‘lag’, which is the time between you making your move on the controller and seeing it on the screen. Those that receive their gigabit internet via a full fibre connection will have similar upload and download speeds, meaning you won’t have to worry about slow ping rates or weak connections.

Another benefit of gigabit internet is that, with your upload speeds matching your downloads, you can stream your gameplay much easier on platforms like Twitch.

Taking media one step beyond streaming and gaming, immersive media, such as 360-degree video and VR is quickly becoming more popular and could greatly benefit from gigabit internet. Faster download and upload speeds, as well as dramatically-reduced latency, will mean a smoother, more realistic experience in immersive digital environments.

Those of us who have swapped our office chairs for sofas for the past few months quickly realised that our home broadband was no match for some of our daily work requirements. Sending and receiving large files, uploading high-resolution images or videos, all the usual tasks you could perform in seconds on the work Wi-Fi that you took for granted.

Gigabit internet reduces the strain on your home network and leaves you with plenty of bandwidth for other members of your household to get on with Zoom calls, home workouts and Netflix binge-sessions.

Traditional methods of backing up data such as local storage and external hard drives are vital for data-heavy files like videos and high-resolution images, but cloud-based storage services have quickly become the new norm. Services like Google Drive and Dropbox give you access to your files wherever you are, and make automatic backups a breeze.

With gigabit internet, using cloud-based storage could be just as quick as using a USB stick or an external hard drive. More tech-savvy users might even want to consider setting up their own server, which can provide huge amounts of storage that can be accessed via online-platforms whenever you need it.

When is gigabit internet not worth it?

Gigabit speeds are impressive and the thought of downloading files in seconds can be tempting, but there are times when gigabit internet isn’t worth the additional cost.

If you have a slow home network

Gigabit internet is great, but if your home network isn’t capable of handling those speeds then you won’t see the benefit. You should receive a gigabit-capable router and modem from your provider when you switch, but it’s worth double-checking.

If you have old technology

If you’re using old devices, you won’t see the benefit of gigabit internet speeds. This is especially true with wireless broadband, where devices connected over Wi-Fi tend to top out at 300Mbps.

Do a quick inventory of your home technology — if everything is brand-new then you’ll be fine, but if you’re using slightly older tech then you might want to upgrade your gadgets before you upgrade your broadband.

If you don’t have a wired connection

Possibly the biggest twist is that gigabit internet speeds are only really achieved with wired connections. Even with a mesh network, if the devices are connected to each other wirelessly it will cut your effective speed in half. If all your devices connect to the internet via Wi-Fi then you probably won’t notice any difference between 500Mbps and gigabit speeds.

If you don't need it

Gigabit broadband deals are often the most expensive ones on the market. So if you need to keep your costs low, a cheaper broadband deal that offers slower speeds would probably be a more sensible decision.

That doesn't mean you'll be stuck with a slow speed — superfast fibre broadband deals now come almost as cheap as copper ADSL ones — but it will mean you can be a lot more comfortable with your monthly outgoings.

Several of the best internet providers are investing in their fibre networks, meaning gigabit internet will slowly become more available in the months and years to come. However, at the moment, 1Gbps speeds are limited to a few key locations, and each of these locations is usually supplied by just one provider at the moment.

For instance, Hyperoptic has some gigabit internet availability within London postcodes but are planning to expand to Sheffield, Newcastle, Birmingham and Nottingham. Meanwhile, TalkTalk has launched a gigabit internet service under the name UFO (ultrafibreoptic) which is only available in parts of York at the moment. Gigabit internet is even available in some rural areas from providers like Gigaclear.

As of July 2020, Virgin Media was the UK's largest gigabit internet provider, overtaking BT Openreach. Its Gig1 service has average speeds of 1,130Mbps which could be accessed by roughly 3.6 million homes in Leeds, Bradford, Glasgow and surrounding areas.