The European cities with the most beautiful homes, according to Pinterest

A French château or contemporary Scandinavian home? Uswitch sought to find out which European city’s homes are the most popular on Pinterest in their latest study.
Share this guide

The European cities with the most beautiful homes, according to Pinterest feature

Ask anyone where they draw their inspiration from, the chances are they will say Pinterest. Whether you’re seeking interior design help, investigating fashion trends, or hunting for new recipes to try, or even looking to discover new destinations to travel to fulfil all your wanderlust dreams, Pinterest is often the go-to for many.

With this in mind, Uswitch.com were intrigued to reveal which European city’s homes are the most loved on the popular photo-sharing platform. We scraped thousands of boards and pins to uncover which city is home to the most beautiful homes in Europe. From modern eco-apartments in Sweden to traditional Grecian villas in Athens, which city came out on top?

The top 10 cities with the most beautiful homes

The European cities with the most beautiful homes, according to Pinterest top ten

It may come as no surprise that Paris takes the top spot. The French capital has stolen the hearts of many people searching for properties or interior inspiration after our study found 955 boards and 47,882 pins dedicated to homes in the City of Love.

Coming in second place is the German capital of Berlin, amassing 256 boards and 17,825 pins for properties in the historic city. Described as a “chilled” version of London, the capital is famed for its eclectic style, which means that homes vary considerably in different areas.

The Dutch capital of Amsterdam is in third. Famed for its canal houses and charming fronted buildings, it also features cutting-edge modern architecture. The city’s contemporary style is found in homes across the capital, which has captured the attention of hundreds of people on Pinterest since there are 180 boards and 9,677 pins focussing on the city’s homes alone.

Even though it has previously been ranked as one of the worst places to live as an ex-pat, dreams of living in Greece are prevalent across Pinterest. Our study can reveal users on the site have made 177 boards centred around homes in Athens, and pictures of homes in the Greek capital have been ‘pinned’ a total of 13,607 times.

The romance and allure draw most people into the Italian city of Venice, with properties in the capital being no exception to this. At the time of our Pinterest study, there were 158 boards devoted to homes in this Italian city and 8,748 individual pins.

Barcelona and Rome are in sixth and seventh place, respectively. Although homes in Roma have more individual pins (8,680 vs 6,004), more boards collecting pictures of houses in Barcelona have been created (158 vs 135).

In eighth place is Dublin, the capital of Ireland. The city, known for its easy-going vibe, is loved by numerous users on Pinterest, with 105 boards made and 5,589 pins for homes in the capital.

In joint ninth place are Edinburgh and Florence, with 69 boards created. The gothic style of the stone buildings in the Scottish capital of Edinburgh adds to the city’s authentic charm, and has been pinned 3,173 times. Comparatively, Florence has fewer pins dedicated to their properties, but has still accumulated a modest 2,100 pins.

Rounding off the top 10 is Vienna, with 59 boards found dedicated to pictures of homes in the Austrian capital. The images centred around the classic Viennese style of high ceilings and antiqued walls have been pinned 2,716 times on the platform. 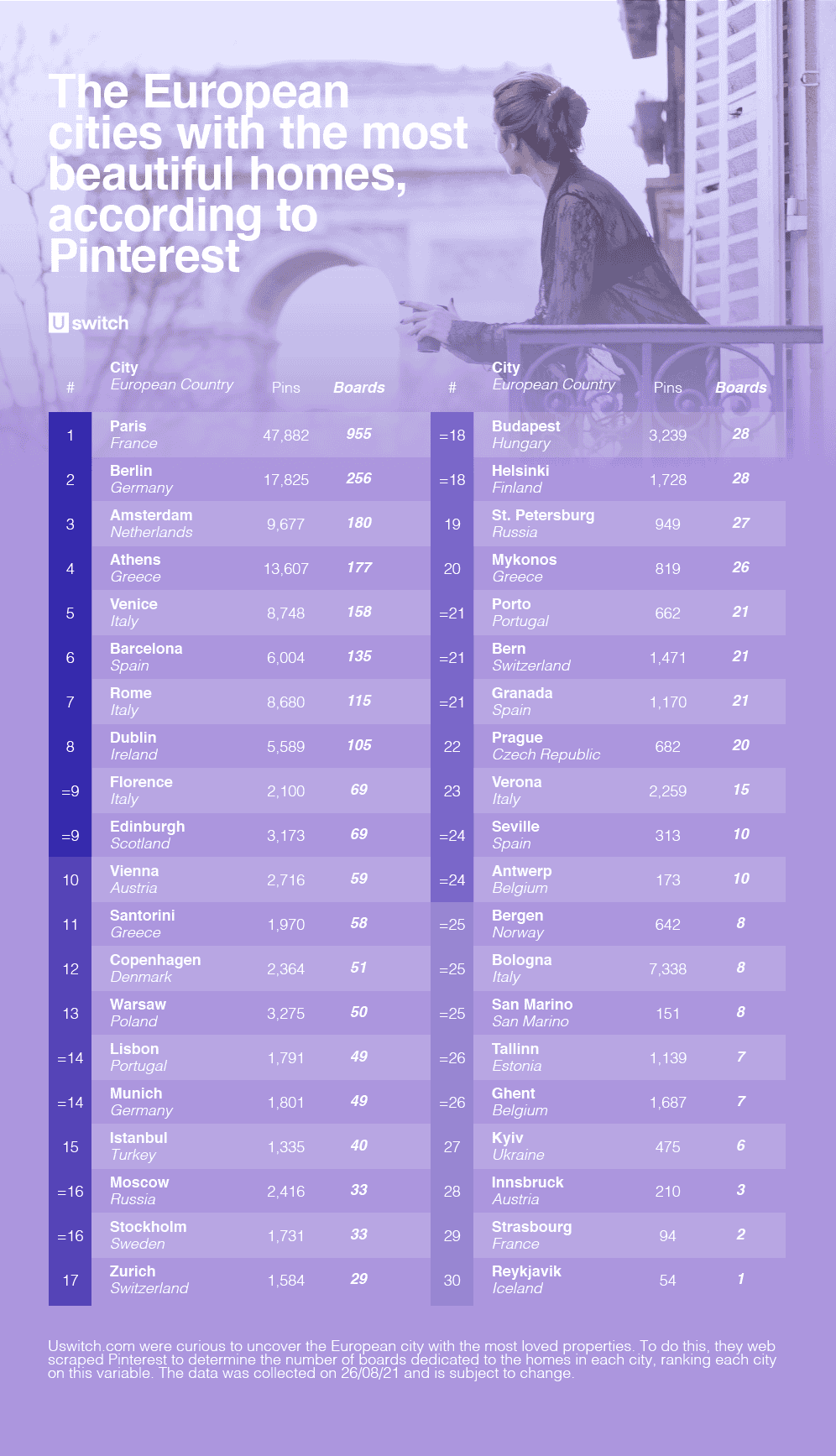 The European cities with the most beautiful homes, according to Pinterest full results

The capital of Iceland, Reykjavik, appears to be one of the least-loved European cities on Pinterest. Our study found just one board dedicated to homes in the city and 54 pins - the least of all European cities studied. This may be because although the ironclad homes are effective in cold weather, they are not the most visually appealing.

Following behind is Strasbourg in France, with just two boards centred around homes in the city and 94 pins, and Innsbruck in Austria comes next with three boards dedicated to homes in the city on the platform.

Estonia’s capital, Tallinn, is among the bottom five cities with just seven boards, alongside Ghent in Belgium. The lack of interest in Tallinn could be explained by the capital’s most unpredictable weather in Europe.

If you're planning on buying a beautiful home, you can compare mortgages here, as well as check out the latest mortgage statistics for 2022, to ensure you are getting the best deal possible for you and your circumstances.