The global landmarks with the most affordable Airbnbs

Which global landmark is home to the cheapest Airbnb accommodation? The experts at Uswitch analysed Airbnb listings within 2km of famous landmarks to find out.
Share this guide

Seeing the world’s most impressive landmarks up close is one of the main reasons people love to travel, but organising transport to and from the location can be a lot of hassle, especially on busy days. To ensure you enjoy the sights on your holiday with little-to-no-hassle, mortgage comparison experts, Uswitch, has uncovered which city offers Airbnb accommodations with the most affordable stays near their iconic landmarks.

To do this, we found Airbnb listings within 2km (1.2 miles) of the world’s most famous tourist attractions and analysed factors such as the price per room and average apartment ratings. We were then able to rank them according to affordability, revealing the cheapest places to travel if you’re looking to do some sightseeing.

European landmarks with the most affordable Airbnbs 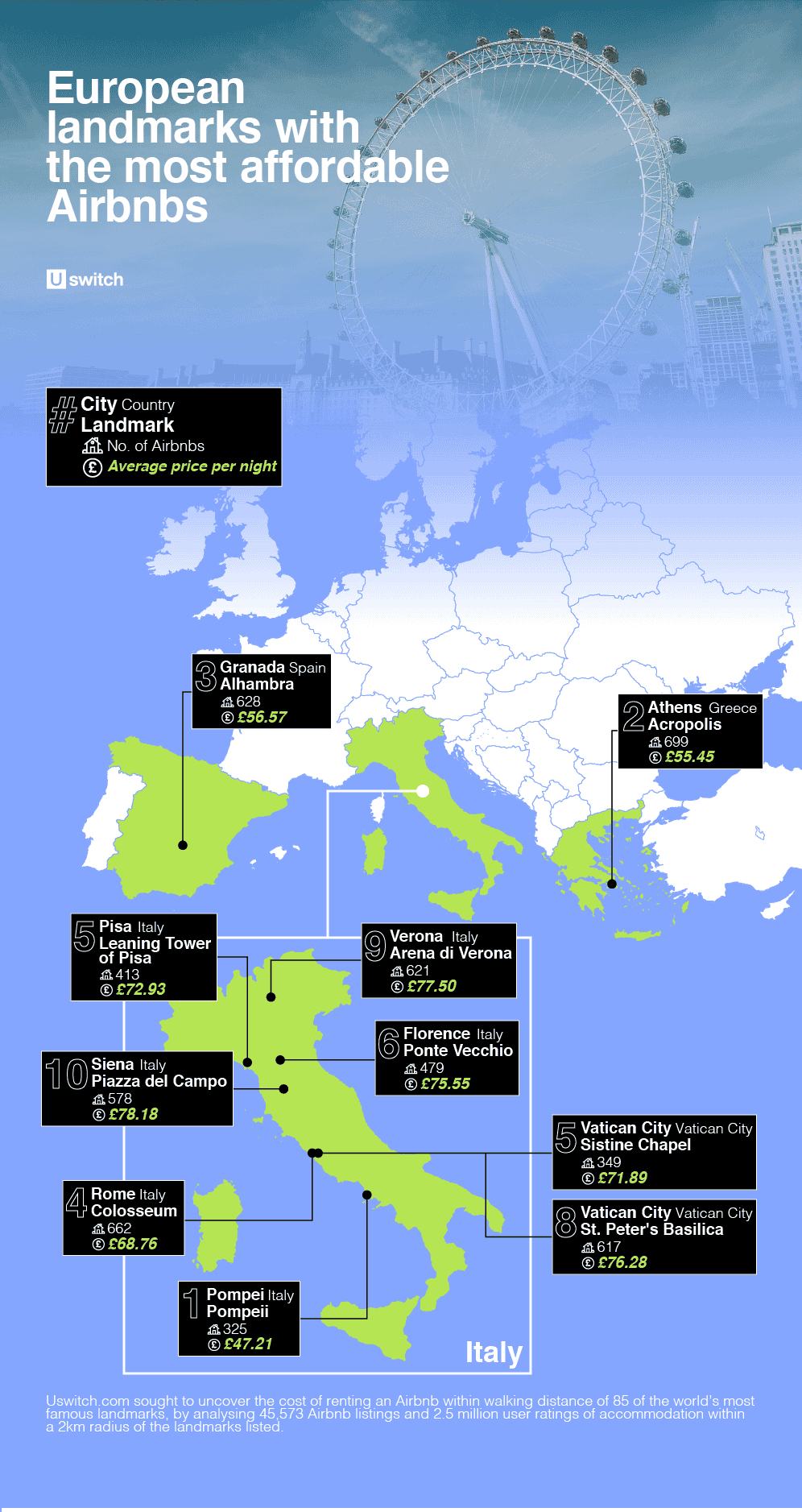 In Europe, Italy comes out on top with the most landmarks with affordable Airbnbs. The first of these entries is the archaeological site of Pompeii. This ancient city attracts over four million visitors a year but is over 16 miles away from the nearest main city, Naples, meaning it can be a bit of a trek after a long day exploring. Luckily, there are 325 Airbnbs close by with a low average price of £47.21 per night.

The Acropolis of Athens is up next, with nearly 700 Airbnbs to choose from in the Greek city. After wandering around the citadel, you can save yourself a long journey back to comfort by booking an Airbnb in Athens, priced at an average of £55.45 per night.

The enchanting palace of Alhambra in Spain looks out over the city of Granada, a location you could stay in for an average of just £56.57 a night based upon our analysis of the 628 properties available in the area. Based on guest reviews and amenities, the average rating for Airbnbs in this area is 4.71 out of five.

Another Italian entry is the Colosseum in Rome. To stay near this piece of history, which was first built around 70 A.D., you can expect to pay an average price of £68.76 per night. In over two-thirds of these places, you’ll even have your own private bathroom and Wi-Fi available.

Landmarks in Vatican City appear twice within the top 10, in fifth and eighth place. First up is the Sistine Chapel, where Airbnbs situated within 2km of this famous landmark are priced at an average of £71.89. In eighth place is St. Peter's Basilica and, according to our analysis, staying in an Airbnb close to this Renaissance church will cost you around £76.28.

The remaining entries in the top 10 are all in Italy. Landmarks including the Leaning Tower of Pisa, Ponte Vecchio, Arena di Verona, and Piazza del Campo all have affordable Airbnbs, with prices falling within the £70 to £80 range.

North and South American landmarks with the cheapest Airbnbs 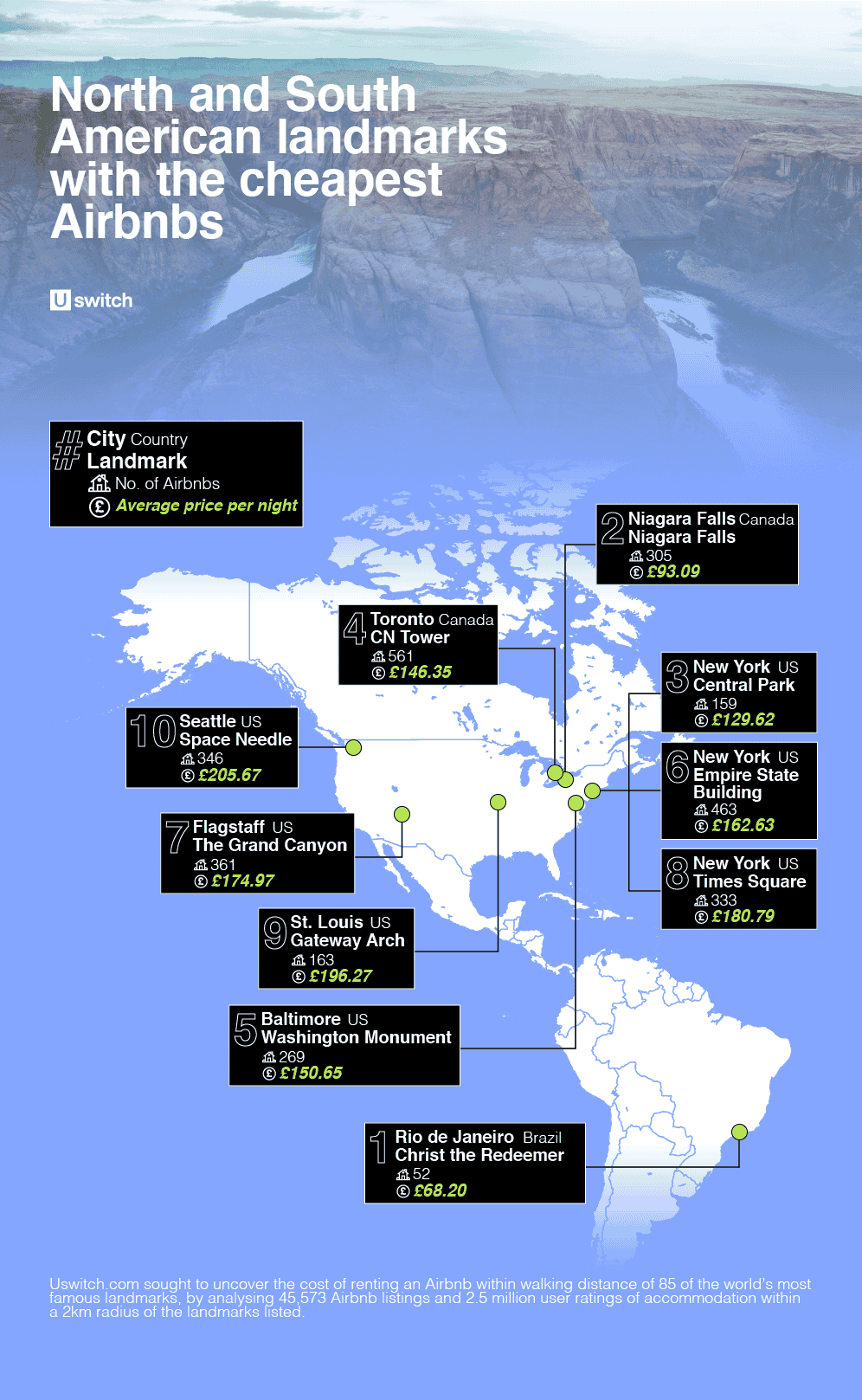 Christ the Redeemer is the only South American landmark to make it into the top 10 for these two continents. Towering over Rio de Janeiro, you’ll be sure to get a view of the statue from one of the 52 Airbnbs available in the area. Not only this, but they’re the cheapest on the list, at an average cost of £68.20 a night.

There are two Canadian entries in the top 10, the famous Niagara Falls and CN Tower. Although there are more choices in Toronto around the tower, it’s best to head to Niagara Falls if you want a cheaper stay (priced at £93.09 vs £146.35 per night). The average ratings of these Airbnbs are 4.79 and 4.76 out of five, respectively, taking into account guest reviews and amenities.

New York is a popular place in terms of both landmarks and Airbnbs. Although it is one of the most expensive cities in the world, the cost of a night stay around Central Park, the Empire State Building, and Times Square ranges from £129.62 to £180.79. Perfect if you’re looking for somewhere to lay down your head after a busy day exploring.

It takes around four to five hours to hike the Grand Canyon, so it’s likely you won’t want to add any additional travel time to that. Stick nearby to the national park in one of the 361 Airbnbs available in the area, priced at an average of £174.97, for a well-earned night’s rest.

The tenth landmark with the most affordable Airbnbs in North and South America is the Space Needle. Located in Seattle, this is the only location in the top 10 that falls into the over £200 a night bracket (£205.67). However, there are 346 places to choose from, with most coming with Wi-Fi and a private bathroom to help you relax.

Landmarks with the most affordable Airbnbs in Africa, Asia and Oceania 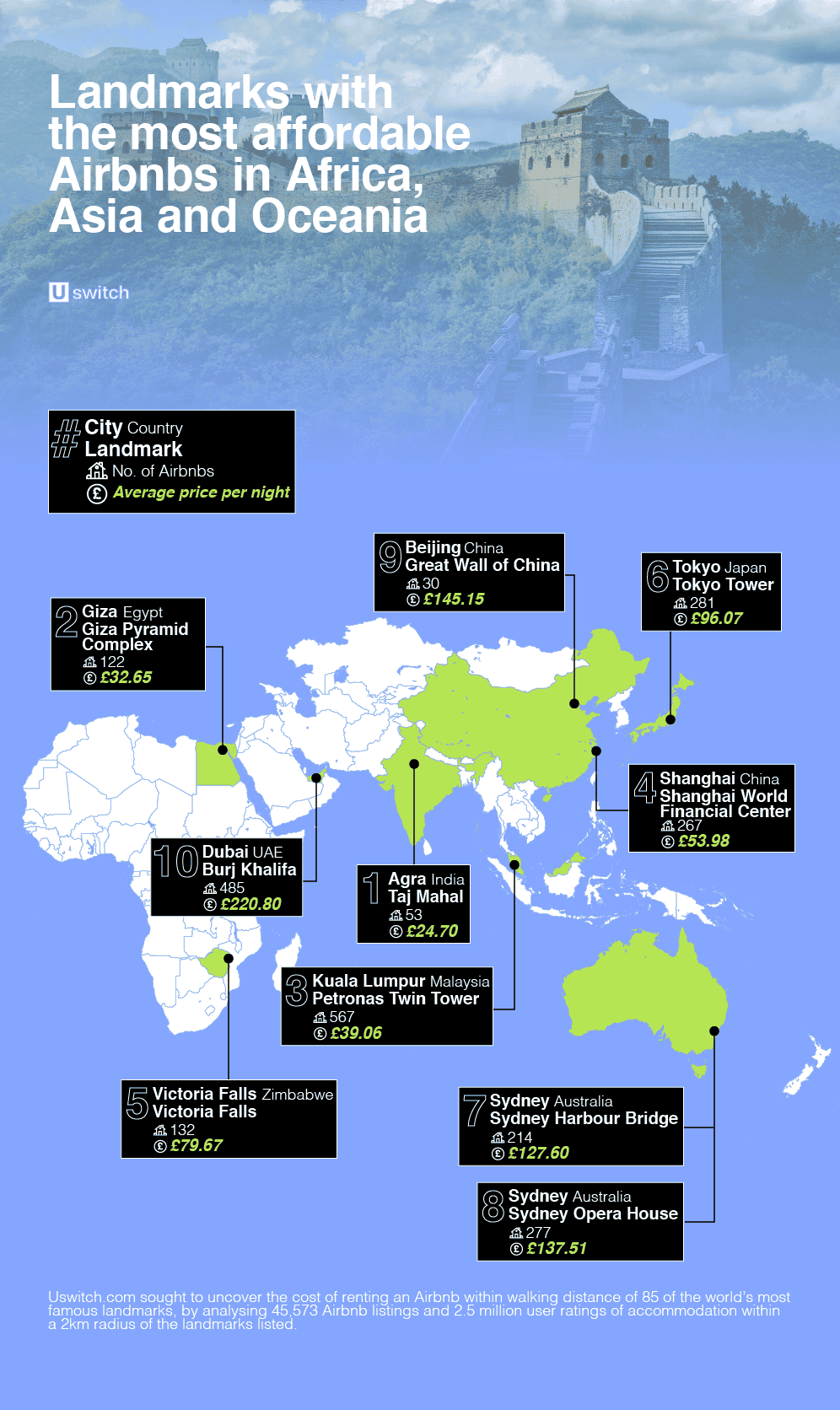 The world-famous Taj Mahal is the landmark with the cheapest Airbnb options within a 2km radius. Situated within the Indian city of Agra, the average cost to stay a night in the surrounding area of the Islamic mosque and tomb is just £24.70. These Airbnbs have an average rating of 4.61 out of five, which takes into account guest reviews and accommodation amenities.

In second place is the Giza Pyramid Complex in Egypt, one of the Seven Wonders of the Ancient World. The average price of a night near this landmark in Cairo is £32.65 per person. As well as this, 114 out of 122 Airbnbs nearby offer Wi-Fi, so you won't have to be disconnected whilst on the road.

Malaysia’s Petronas Towers are in third place throughout Africa, Asia and Oceania. The modern Asian landmark is visible all around Kuala Lumpur, and spending the night near it will only cost you £39.06 - 58% more than the Taj Mahal. With an average rating of 4.77 out of five for their 567 Airbnb options, you’ll be sure to have a pleasant stay too.

Other landmarks in Africa, Asia and Oceania, are the Tokyo Tower, Sydney Harbour Bridge, and Sydney Opera House. All of these must-see places have Airbnbs costing under £140 a night (on average) and have over 200 properties to choose from.

The Great Wall of China is in ninth place. Here, there are only 30 properties available on Airbnb within 2km, priced at around £145.15 a night. It’s worth noting that this location is among the worst landmarks for signal strength, so you may have to go offline for a few hours while you explore.

The top 50 landmarks with the most affordable Airbnbs nearby

Top 50 landmarks with the most affordable Airbnbs
Your cookie preferences