On 19 March, 2020 The Bank of England slashed the base rate for a second time in a single month down to a record low of 0.1% warning that the coronavirus pandemic will result in a "sharp and large" economic shock. The Bank of England cut the base rate of interest to 0.25% on 11 March 2020, back to historically low levels seen following the referendum on Brexit in 2016.

The base rate cut will likely lead to mortgage deals becoming cheaper. Savers, however, will lose out as returns from cash savings accounts were already woefully low.

The base interest rate fell to an all-time low in the midst of the financial crisis in 2009. It stayed at this record low for seven years, and lead to gradually cheaper mortgage interest rates but poor rates for savings deposits.

Many economists had been anticipating a rate rise since 2014, but Governor of the Bank of England, Mark Carney, was a strong voice in delaying this rise, and in the aftermath of the Brexit vote on 23 June 2016 the bank decided to take rates even lower to 0.25%.

That all changed when a long-awaited rise was announced in November 2017, and was followed by a further increase.

What is the base rate of interest and why does it matter?

The base rate of interest is the ‘price’ that retail and merchant banks can buy money for. It is set by the Bank of England's nine-member Monetary Policy Committee, who meet every month to vote on whether to change the rate.

The base rate is one of the most significant influences on UK interest rates that are available to the public for both borrowing and savings. In the past, where the base rate has gone, mortgage and savings rates have followed closely. It can also affect the value of the pound.

Watch the Bank of England's video series if you'd like to know more about their role.

How much will the base rate decrease by?

Before the outcome of the 2016 Brexit referendum, it was widely anticipated that the BoE would take the rate up. But to calm markets upset by the result, the BoE changed tack and halved the rate to 0.25%.

It remains to be seen how long the return to 0.25% on 11 March 2020 is going to last, as no one yet knows the real economic impact the coronavirus outbreak will have.

Historically, the base rate gradually cycles up and down in relation to growth, inflation and other economic indexes. Once the rate began to rise from a low point, it continued to rise for a year or so until it hit a peak, when it would gradually fall.

But, we’ve been in uncharted territory ever since 2009 when the BoE took the base rate to an unprecedented low of 0.5%, and it's hard to call where the latest rate rises will take us.

What could the base interest rate rise do to mortgage rates?

Mortgage deals have slowly been creeping in advance of the much-anticipated rate rise. But now it's happened, the extent to which lenders will pass it on depends on other market influences and competition with other lenders. 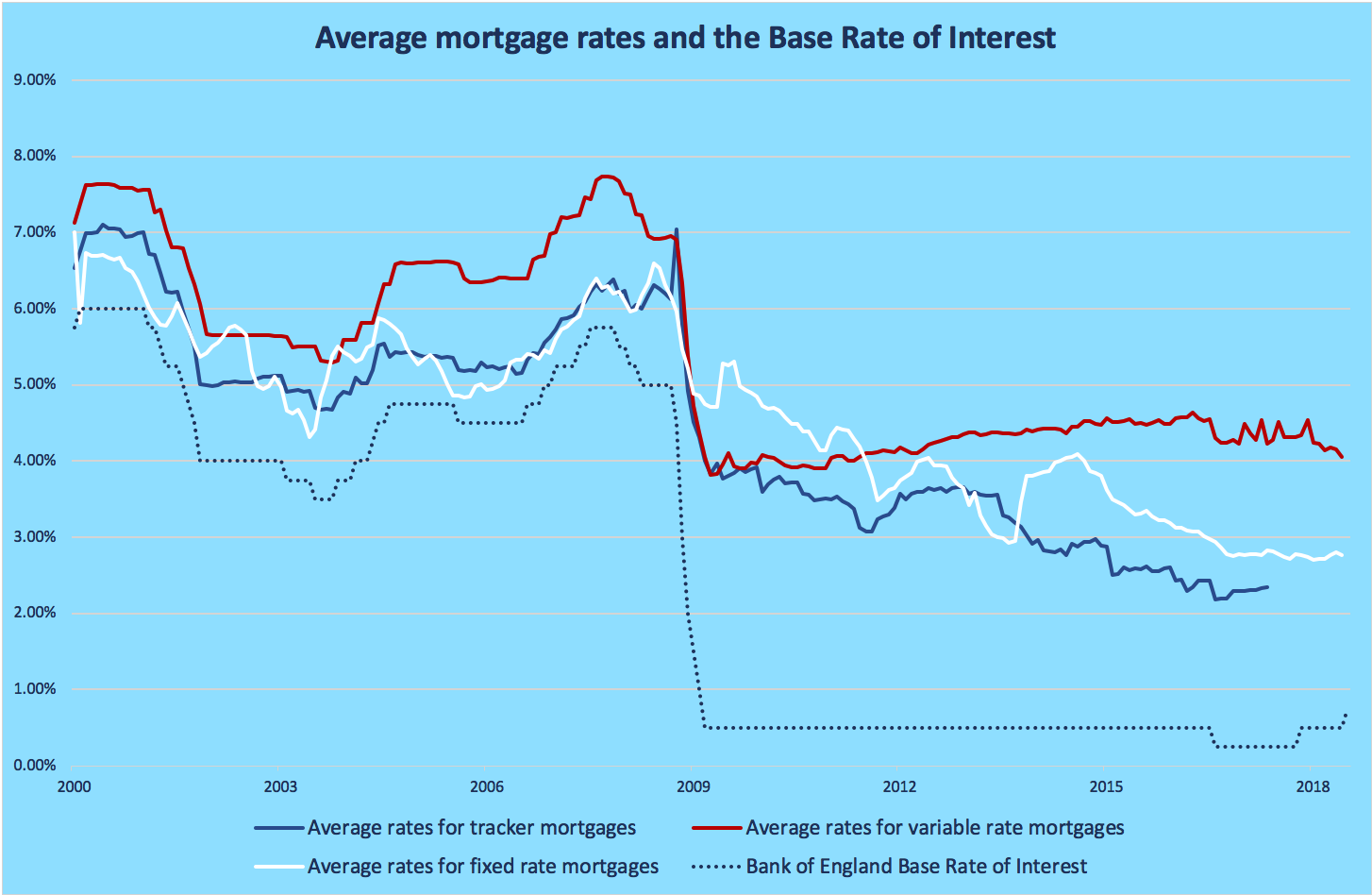 Lenders set their own internal 'base rate' for customers, called the Standard Variable Rate (SVR), which they will set at their discretion. All of a lender's mortgage deals (other than tracker mortgages) will be based on this rate.

What could this mean for repayments?

Repayments will likely start to increase for borrowers with mortgages that are on variable rates.

However, the amount monthly repayments will increase by depends on how their bank responds to the base rate cut and how much they raise their SVR by.

Those with tracker deals stand to see the most clear and direct rise in their monthly repayments with their rates increasing by 0.25%.

What could you do with your mortgage?

With mortgage rates rising after the rate rise it could be tempting to remortgage to get a fixed rate deal.

However, if you are considering switching to a new mortgage make sure you carefully examine any exit fees you may have from your existing mortgage as well as looking closely at booking and arrangement fees for a mortgage.

These fees might not make it worth your while to switch mortgages, but if the new rate you are switching to is significantly lower enough you should soon see some big savings.

As a general rule, you should also approach your mortgage with a personalised plan, ignoring the markets to some extent, or you could find yourself obsessing over getting the perfect rate and missing out on perfectly suitable deals.

Switch to a fixed mortgage rate

A fixed rate mortgage will give you set a set rate (and fixed monthly repayments) for a number of years, typically between two to five years, but sometimes as long as 10 years.

Despite offering security, switching to a fixed rate mortgage is something of a risk, as you may find yourself on a relatively more expensive mortgage should rates fall. However with mortgage rates creeping up, this could be a safe bet.

Thinking of fixing your mortgage rate?

Enjoy fixed monthly mortgage costs for a set period, whatever happens in the financial markets

Switch to a tracker mortgage

A tracker mortgage is linked to the Bank of England’s interest rate with an added mark-up.

For example, your mortgage could be the interest rate +2%, so currently you would be paying a rate of 2.75% on your mortgage repayments.

Switch to a variable rate mortgage

A variable rate mortgage will follow a lender's SVR. Often you will be able to enjoy an introductory offer or a discount from the SVR, which could bring your rate as low as around 1%.

Traditionally, discounted variable rates were the cheapest rates available on the market. However, this isn't necessarily the case anymore , so make sure to compare all your options.

Are you happy to see where variable rates go?

Find a discounted variable rate mortgage that could stay at level you're comfortable with.

What could the base rate rise do to savings interest rates?

A base rate rise should be good news for savers, who could see returns for cash deposits improve.

Savers have had something of a difficult time finding decent interest rates in recent years with rates getting lower and lower, with average savings rates hovering around the 0.5 to 1% mark at best. 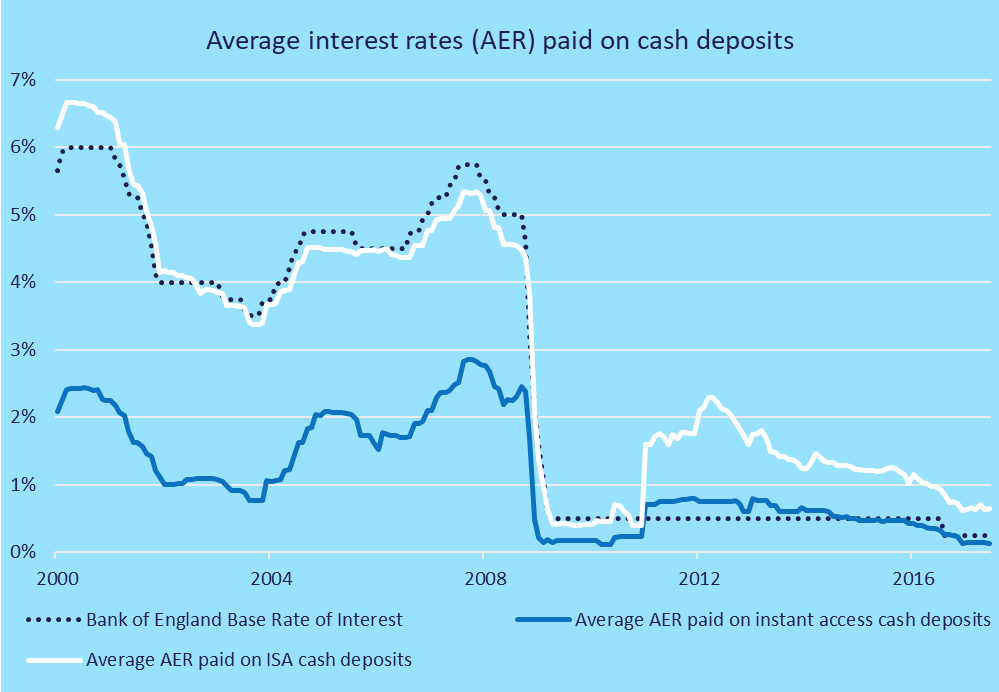 Whether this base rate rise will be passed on to savers is difficult to say, a few banks and building societies (Yorkshire Building Society, for example) have already announced they will be directly passing on the rate rise to their customers.

Though, it's likely banks will be a bit more coy about paying out more money on deposits.

How can you get better rates for your savings?

Looking for better returns from your savings will likely remain a challenge. Despite the base rate going up to the highest rate since 2009, it still has a long way to go to reach the levels seen before the financial crisis.

The main hope for savers at the moment are high interest current accounts that offer rates as high as 5% (with certain limitations).

Remember that as of April 2016 the first £1,000 of interest earned annually from current accounts is out of tax (£500 for high rate taxpayers).

It's also worth noting there are switching incentives of around £100 on offer for switching to a new bank account.

So if you can't find a bank account that gives you a decent AER, you could at least get a nice cash welcome bonus.

Get an offset mortgage

If your mortgage APR was 3%, you’d be saving around £600 worth of interest charges a year from your mortgage.

Want to save at your mortgage rate?

If you want better returns from savings you could consider investing in alternatives to cash.

Unfortunately as a rule, the better the returns from an investment, the riskier it tends to be and there is always the risk you may even end up losing money by investing in alternatives to cash savings.

You will also not enjoy the same £85,000 deposit guarantees from the Financial Services Compensation Scheme (FSCS) as would for cash deposits.

Government or premium bonds are a safe bet to at least keep your savings safe, but returns are not necessarily guaranteed as prizes are 'won' on a random lottery basis.

In all cases before investing your savings in alternatives to cash it's wise to seek independent financial advice.

The Lifetime ISA launched in April 2017 also offers a government bonus of 25%. You can deposit up £4,000 a year. But you have to wait until you are 60 to enjoy the bonus, or you can access your savings and bonus when you buy your first home.