One of the most-anticipated leaps forward in the tech sector this year is the arrival of 5G mobile services to the UK. All the major operators have plans to get consumer services up and running before the end of 2019, and it's expected that 2020 will see huge growth for the technology.

But while much of the attention has focused on what it could do for our mobile phone connectivity, it could also offer new options for home broadband users. So could this technology be the future of home broadband?

Is 5G faster than home broadband?

5G has only just launched in the UK, but its speeds already outstrip the majority of home broadband connections. When testing 5G mobiles around London we found download speeds peaked at over 400Mbps, far faster than the 63Mbps offered in superfast broadband packages. In fact, those speeds could even outpace some fibre broadband connections, with only top-end packages providing faster speeds (e.g. Virgin’s Ultimate Oomph Bundle with average speeds of 516Mbps).

However, these 5G speeds were only recorded in very specific areas of the city. The current infrastructure means that 5G is not available throughout all of London, let alone the UK, which means it’s not a faster alternative to home broadband for the vast majority of us yet.

It’s also worth noting that 5G isn’t the only technology that will improve in the coming months and years. By the time 5G home broadband is readily available, it’s likely that fibre broadband speeds will have increased as well, with the potential for 1Gbps broadband within our grasp.

5G upload speeds are not as impressive

When searching the internet for examples of how impressive 5G is, you’ll find plenty of examples of exemplary download speeds. And while these speeds are impressive — if a little inconsistent at this stage — what’s lacking is any real boost in upload speeds.

5G allows you to download files and movies on your phone far faster than ever before, but if you were looking for an alternative to a Wi-Fi spot where you could effectively work, you would find those uploads incredibly restrictive.

Is 5G easier to get than broadband?

As many as 860,000 UK premises have broadband speeds lower than 10Mbps due to the difficult logistics of physically connecting homes to the fastest networks, which is a particularly big challenge for remote and sparsely-populated areas.

5G broadband eliminates the need for any costly network upgrades or installations. All users would need is a 5G hub and a decent signal that could be provided by easy-to-install small base stations.

Check out some of our latest Broadband deals

Is 5G compatible with my devices?

A major application of 5G is sure to be IoT (the Internet of Things) and the option for more devices to be connected to the internet without the need to be near an active Wi-Fi spot.

However, in order to take advantage of the benefits of 5G, devices will need to have a specific 5G chipset. As yet, only a small amount of mobile phone handsets have one, so if you want your laptop, TV, sound system, and coffee-maker all hooked up too, you’ll need a 5G hub.

With literally billions of Wi-Fi-enabled devices in use today, broadband and Wi-Fi aren’t likely to be pushed out of the market any time soon.

This week saw the launch of Three’s first steps into the 5G market with their 5G-powered home broadband service. Though the operator has plans to include 5G in all its future mobile data plans (at no extra cost), its first initial focus is on the home broadband market.

At the moment, Three’s 5G broadband will only be available in selected areas of London — Camden, Camberwell and Southwark — with plans to roll out to other boroughs such as Hackney, Islington and Tower Hamlets in the near future.

A more complete 5G broadband network should be in place by the end of the year along with the release of newer handsets capable of supporting 5G services such as the Huawei Mate 20 X 5G, Xiaomi Mi Mix 5G and Samsung Note 10 5G.

Where will Three’s 5G home broadband be available? 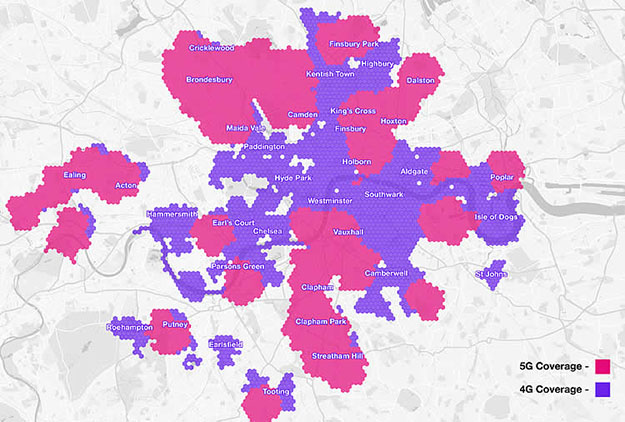 5G coverage will be spotty at best during the initial stages of it being rolled out across London, with the following cities being included later on in the year: Birmingham, Bolton, Bradford, Brighton, Bristol, Cardiff, Coventry, Derby, Edinburgh, Glasgow, Hull, Leeds, Leicester, Liverpool, Manchester, Middlesbrough, Milton Keynes, Nottingham, Reading, Rotherham, Sheffield, Slough, Sunderland and Wolverhampton.

Three CEO Dave Dyson stated, "Three's 5G is going to revolutionise the home broadband experience. No more paying for landline rental, no more waiting for engineers, and even a same-day delivery option. It really is the straightforward plug and play broadband that customers have been waiting for.

"We've taken a simple approach with one single truly unlimited data plan to give customers the opportunity to fully explore 5G and all its exciting possibilities. The ease and immediacy of it all means home broadband using 5G is going to be key to the future of the connected home."

Is Three 5G better/faster than other 5G networks?

Three has been boldly asserting itself as the only “true” 5G provider, its confidence based on the frequency range that Three 5G will operate on. When Ofcom initially auctioned the rights to use different 5G radio frequencies — so that operators wouldn’t clash by using the same frequencies — Three made sure to buy up the lion’s share, with more than twice as much as the next closest carrier.

Three’s 5G frequencies also include 100MHz of contiguous spectrum (adjacent frequencies), which theoretically means its network will have greater reliability and speed when fully deployed than other operators.