Ofcom, the UK communications regulator, has revealed in its quarterly report that customer complaints about landline, fixed broadband, pay-monthly mobile and pay TV services jumped back up during the first easing of lockdown restrictions last summer.

Data for its report was collected during July-September 2020, which gives an indication of the state of the telecoms market as restrictions were eased and schools and workplaces began to re-open. And while some returned to work, many continued to work remotely where possible, placing additional importance on a fast and reliable broadband connection.

More complaints during the second phase of lockdown

It’s probably no big surprise that the volume of complaints increased for Q3 of 2020 for fixed broadband, landline, pay-monthly mobile and pay-TV services. However, this is mainly because complaints unexpectedly fell during the first phase of the coronavirus lockdown. 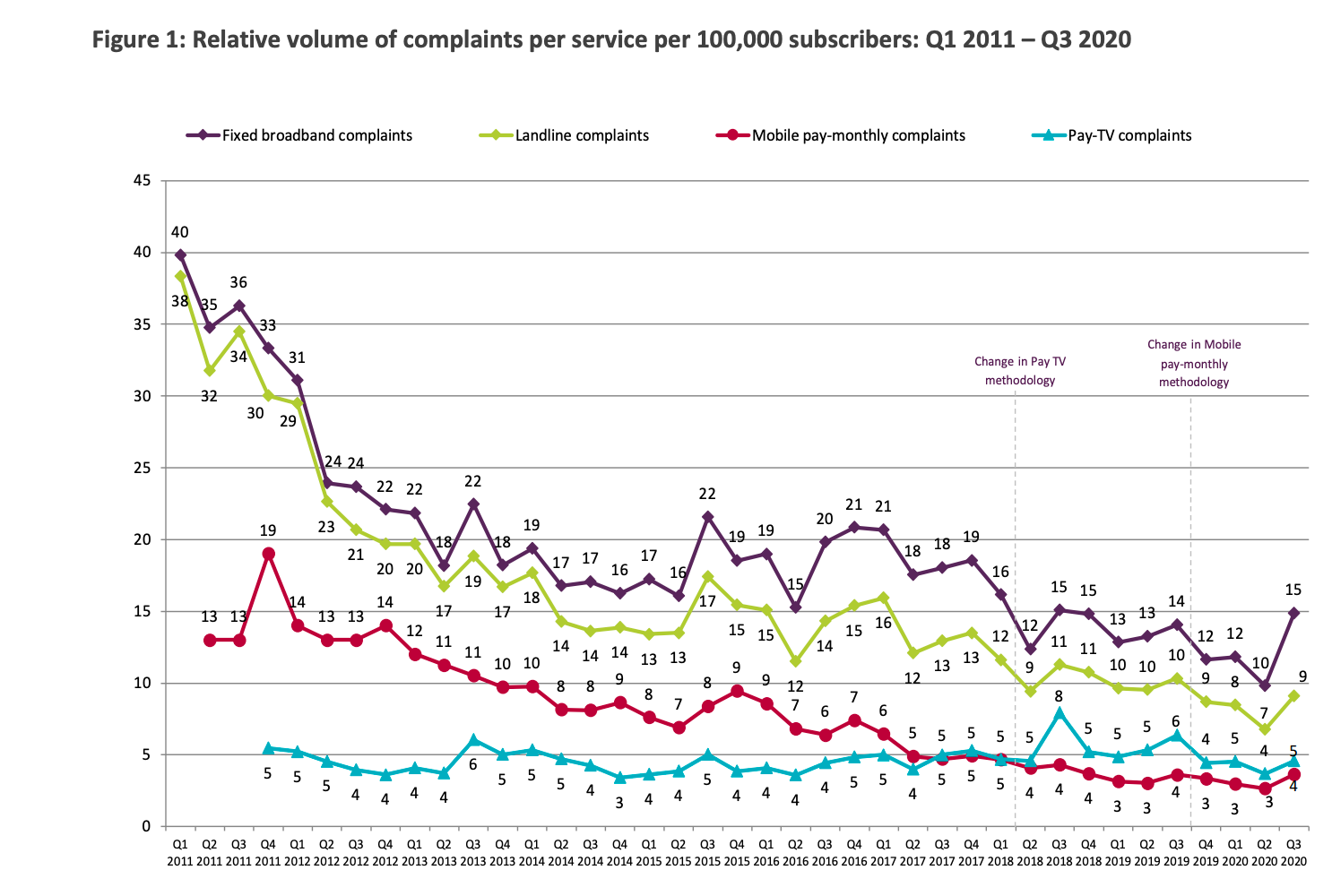 The latest complaint levels were now back to where they were before the lockdown, with most call centres back open and more customers able to lodge complaints with their providers and then to Ofcom.

Broadband services tended to generate the highest volume of complaints for this quarter, which is again unsurprising given the increased reliance on fixed broadband services for those working and studying from home.

Sky receives the lowest number of complaints for all its services

Sky often performs well in these reports, and this quarter is no different. Sky received the lowest number of complaints per 100,000 customers across all categories: broadband, landline and pay-TV, as well as pay-monthly mobile in which it tied for top spot with Tesco Mobile. 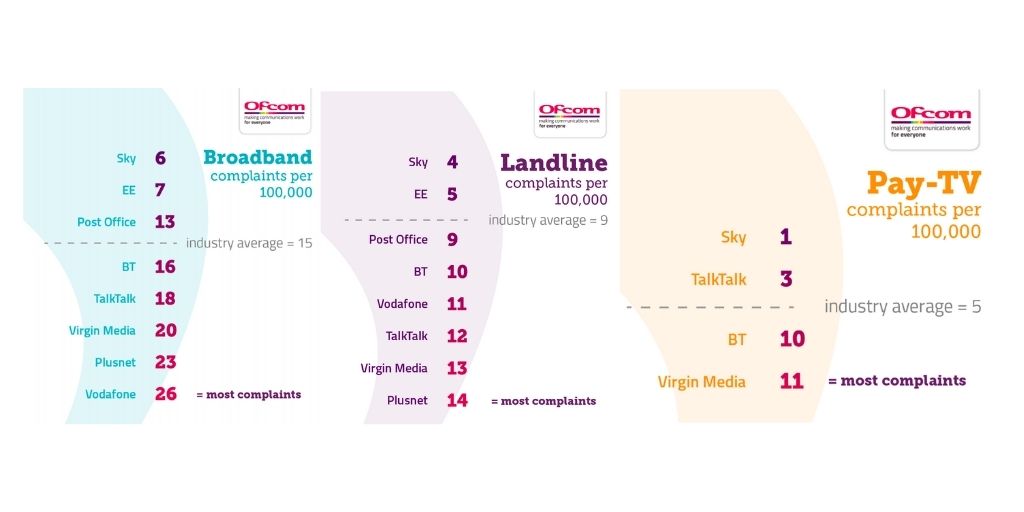 For a quad-play provider like Sky that provides all four telecom services to households, it’s a real vote of confidence that it consistently performs well in all four areas in the eyes of its customers.

Most broadband complaints focused on faults and service issues

Vodafone received the highest volume of complaints for this quarter for fixed broadband services, the vast majority of which (50%) centred on faults, service and provisioning issues. This was a trend seen across the whole category, with other drivers for complaints to Ofcom being complaints handling (25%) and issues relating to billing, pricing and charges (14%).

This trend makes a lot of sense, given the difficulty many providers would have had in dealing with faults to services and scheduling engineer visits during a national lockdown.

These figures also highlight the importance of great customer service in dealing with a customer’s issues at the first point of contact and eliminating the need for customers to contact Ofcom for help getting a resolution.

“Broadband complaints have increased to levels not seen since 2018, after years of falling customer concerns.

“Vodafone has the highest broadband complaints rate, while other providers including Plusnet and BT saw their figures more than double. TalkTalk and Post Office were the only two broadband providers to see complaint rates fall.

“Ofcom’s report shows that almost half of all fixed broadband complaints were about faults, service and provisioning. With so many households currently reliant on their internet connections for work, education and entertainment, it’s clear that providers have to do more to prioritise these types of problems.

“If you are unhappy with the service you're receiving and you haven’t been able to resolve the complaint directly with your provider, you can take it to the relevant ombudsman who will independently investigate your complaint.”

Find out how to complain to your broadband provider with our dedicated guide.

What can you do if you’re unhappy with your TV and broadband provider?

It’s been an extremely difficult year, one in which many customers made allowances for their broadband providers being worked to their limit and not always able to solve problems right away.

This is no longer the case, and even though lockdown is still a while from being over, providers are closer to their normal operating procedure and should be able to resolve any concerns you have regarding your service.

Contacting your provider should always be the first step towards a resolution, but if one can’t be found, you may be able to find a better, more affordable service from a new provider.