Vodafone has officially launched its 5G mobile plans for customers in seven UK cities including London and Manchester, with more to follow by the end of the year.

Vodafone also announced Be Unlimited, which does away with data restrictions and instead offers different plans based on the 5G speeds offered in your plan. So instead of paying for how much data you can use, you’ll be paying for how quickly you can download, stream etc. To get the most out of 5G you can also add an entertainment service to your plan, such as Spotify or Amazon Prime Video.

The three Be Unlimited plans to launch on 10th July are:

Unlimited - 10Mbps for £26 a month, for video callers, downloaders, and video streamers. 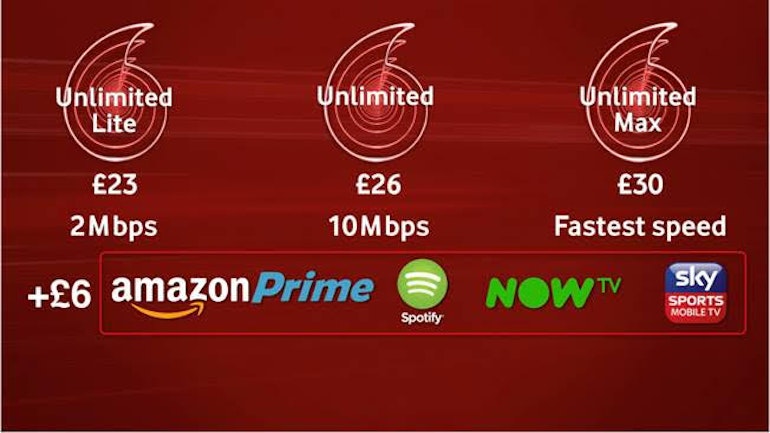 As well as Unlimited, customers can also choose from three Vodafone Red plans. These plans are 5G ready at no extra cost and like Unlimited come in three options:

Red 1 - For £11 a month you get 1GB data and unlimited voice minutes. A low cost option for light users.

Red 2 - The middle option will cost £15 a month for 5GB data and unlimited voice minutes. A good choice for social media and browsing.

Red 3 - And for £20 a month you get 20GB data and unlimited voice minutes. This data stacked option is ideal if you spend you’re big on streaming music and downloading content.

Vodafone also promised 5G roaming in Germany, Italy, and Spain initially, with more countries to join as they are switched on to 5G. So you can continue to enjoy 5G speeds even when you’re on holiday.

In another move that’ll no doubt give Vodafone the edge over its rivals, Vodafone has promised that its 5G plans won't cost any more than its 4G options.

Nick Jeffery, CEO of Vodafone UK, spoke at the lavish launch event in London’s Sky Garden, where he and Formula 1 champion Lewis Hamilton officially switched on its 5G.

“We thought it was the right role for Vodafone to get back to its roots as a great British tech innovator. We will give customers all the data they need, when and where they want it,” Jeffery said.

Vodafone also launched a number of traditional pay monthly plans paired with its current 5G phones, including the Samsung Galaxy S10 5G. These are available now with plans starting at 5GB and going up all the way to 100GB.

The seven cities to get 5G at launch are Birmingham, Bristol, Cardiff, Glasgow, Manchester, Liverpool, and London. Birkenhead, Blackpool, Bournemouth, Guildford, Newbury, Portsmouth, Plymouth, Reading, Southampton, Stoke-on-Trent, Warrington and Wolverhampton will be switched on by the end of 2019.

What is 5G? Everything you need to know about 5G