Samsung Galaxy S21: Everything you need to know

Fresh from Samsung Unpacked, we’ve got all the juicy info on the latest and greatest Samsung phones - the S21 range.

Samsung’s new flagship devices have just been announced several weeks earlier than normal. And we’re getting treated to three new smartphones - the Galaxy S21, Galaxy S21 Plus and the Galaxy S21 Ultra.

Samsung’s S21 range is usually the Android world’s best, with the height of smartphone tech behind its screens, in its cameras and powering its processors.

So how does the 2021 line up of Samsung’s best stack up? How good are they? When can you buy one? How much will they cost? Which of the three phones is best for you? We’ve got everything you need to know about the Samsung Galaxy S21 range. 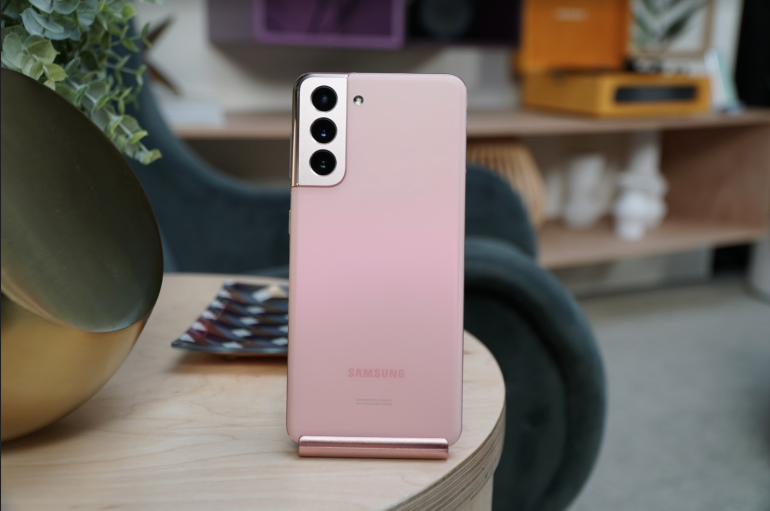 The standard smartphone in the range is the Samsung Galaxy S21, and it’s a significant next step up from last year’s S20.

As you can see the Galaxy S21 has some exciting features. The design of Samsung’s new devices is sleek and stylish, with pastel tones being the thematic colourway this time round. A big, clear 6.2-inch AMOLED display packs FHD resolution with an adaptive 120Hz refresh rate.

The camera set up on the back is pretty impressive to say the least. Samsung is touting it as the phone’s best feature and it’s easy to see why. The triple camera setup is made up of two 12MP lenses and a 64MP telephoto lens. You’ve got an ultrawide lens there which is the norm now for premium smartphones. And on the front, there’s a 10MP selfie cam.

From what Samsung has shown, the picture quality across these cameras is fantastic.

And what about the price? The Samsung Galaxy S21 starts off at £769 which is a bit cheaper than expected. It’s available for pre-order now, with the handset officially out on 29 January. 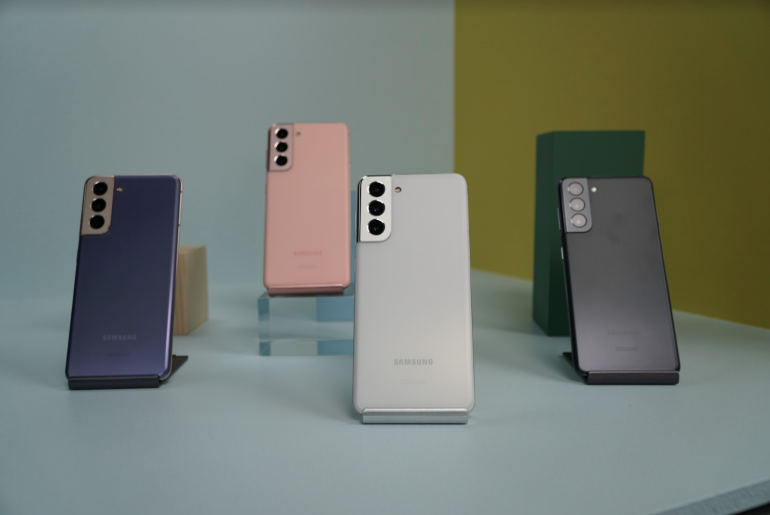 Next up is the S21 Plus, with a bigger screen that shows off content in spectacular fashion.

Specs wise, the Galaxy S21 Plus is not far removed from the standard S21, but it does come with a considerably larger screen. It’s got the same triple camera on the back with dual 12MP lenses and that 64MP telephoto, as well as a sharp 10MP selfie camera on the front.

The screen is also in FHD with a 120Hz adaptive refresh rate - it does everything the standard S21 does but in a bigger package. So if you like larger devices, this is the one to go for. The S21 Plus also has a glass back as opposed to the standard S21’s plastic, so it feels a bit more premium.

Price wise, you’re going to pay a bit extra for that screen. The Galaxy S21 Plus will start off from £949 upfront, which is still below the norm for premium devices with these kinds of specs. Pre-order now to get the S21 Plus on 29 January. 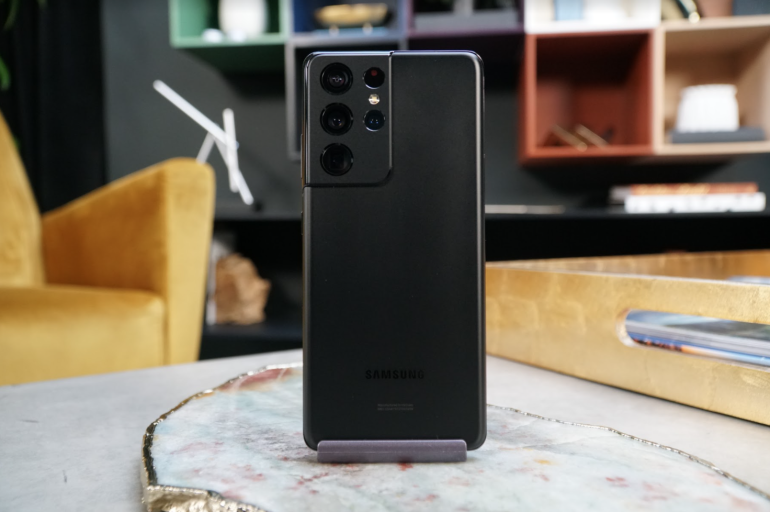 The biggest smartphone in the range, the Samsung Galaxy S21 Ultra doesn’t just boast more size, it steps things up in some important specs too.

The Galaxy S21 Ultra looks to be the most impressive device Samsung has ever made. This super smartphone is bigger than its S21 siblings in size but it’s also bigger in specs too.

The S21 Ultra is the only smartphone in the S21 range to feature WQHD screen resolution so the display is clearer and sharper and looks fantastic with that 120Hz refresh rate.

The cameras are a lot more impressive too. The Galaxy S21 Ultra has a huge 108MP main shooter, 12MP ultrawide and two 10MP telephoto lenses to make up a quad camera array that includes 100x Space Zoom feature.

It’s got a bigger battery too: 5,000 mAh to be exact. But of course, with a bigger screen and more power being used, that’s to be expected.

Finally, and in a big move, the S21 Ultra also supports Samsung’s stylus - the S Pen. So if you want to use your smartphone to write actual notes, jot down ideas, even draw up sketches you can now do so on the S21 Ultra. However the S Pen is not included in the pack, so you will have to purchase one separately.

If you want to get the best device of the range, you’ll find that prices start off at £1,149, which is quite a bit more than the rest of the S21 family. But you do get a lot more for your money. So if truly premium smartphones are your thing, this is the S21 to opt for.

As with the rest of the range you can pre-order the Samsung Galaxy S21 Ultra right now with delivery expected on 29 January. 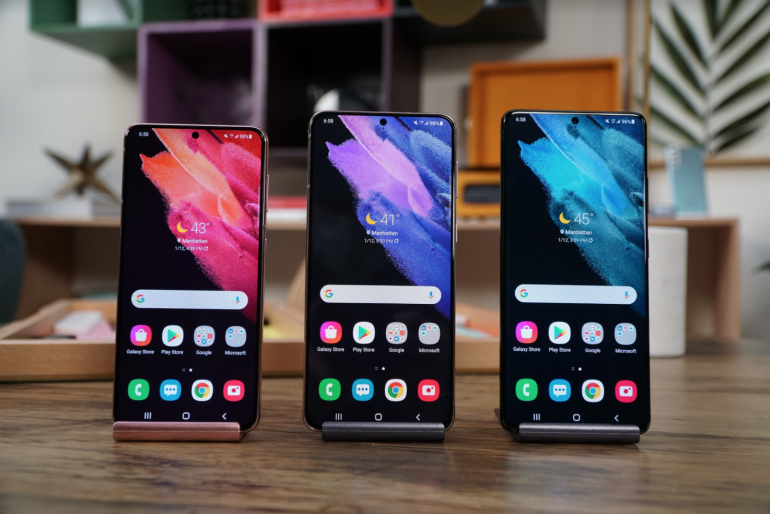 Across the entire range, Samsung has followed Apple’s lead and removed headphones and charging plugs from its boxes. So you’ll need to use your existing plug. This does of course make the packaging considerably smaller and is better for the environment.

As mentioned, the entire Samsung Galaxy S21 range is available for pre-order now, so you can start 2021 with one of the best smartphones we’re likely to see all year.

Ru Bhikha, mobiles expert here at Uswitch, said: “After weeks of speculation on how the pandemic might affect this launch, Samsung has pulled a rabbit out of the hat and given fans three impressive devices at a range of prices.

“At £769, the standard S21 model with its 6.2-inch screen is cheaper than last year’s equivalent S20, reversing years of steadily increasing prices and acknowledging the strain on many consumers’ budgets.

“The Ultra’s quad camera set-up includes a 108MP wide lens and two telephoto snappers in the latest bout of the continuing arms race between manufacturers for the crown of best picture-taker.

“Consumers can finally use the S Pen so beloved of Note-series fans, but the gadget can only be used with the Ultra model, which retails at £1,149.

“Like the iPhone 12 there’s no charger in the box, and this looks like being a trend that we are likely to see more of this year as manufacturers brag of their environmental goals.

“The S range has always been popular with Android users, and the addition of the S Pen will only burnish the reputations of these devices.”

You can finally customise your iPhone lock screen.