When is the Samsung Galaxy Note 9 on sale?

While there's no official release date, Samsung usually releases a Note phone in late August. So we're expecting the Galaxy Note 9 to be unveiled towards the end of August 2018 and on-sale in early September.

How much will the Samsung Galaxy Note 9 cost?

Again, no prices have been announced yet. But the cost of the Note range seems to increase every year. So last year's Note 8 will set you back £869 SIM-free, it's likely that you'll have to pay closer to £900 for the entry-level Note 9.

Contract prices for last year’s Note 8 started at just over £50 per month with no upfront costs.

And with all the new features we're expecting to see on the Note 9, there will almost certainly be a price tag to match.

Samsung’s flagship Galaxy Note 8 is barely two months out of the gate. But already there are rumblings about what to expect from next year’s update. The Galaxy Note 9 will need to be an all-out masterpiece if it wants to take on Apple’s game changing iPhone X.

Here are the first rumours flying around the web about Samsung’s 2018 flagship. 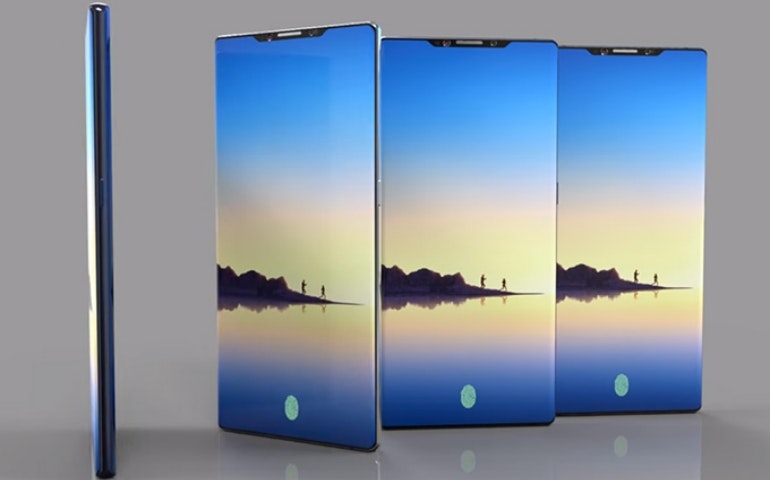 With reports that Apple is planning to drop Touch ID altogether from 2018’s iPhone range, the path is now clear for Samsung to offer a revolutionary approach to how smartphones read fingerprints.

A new report from the supply chain front-line has suggested Samsung is working to place a scanner beneath the Galaxy Note 9’s screen, something it failed to pull off with the Galaxy Note 8. This would free up space on the back for a cleaner design and help the new phone stand out from the pack.

Apple’s Face ID has changed the game for mobile makers. While Samsung already has a basic form of facial scanning, it’s been shown to be slow and insecure, with the inability to distinguish between actual faces and photographs.

A 3D scanning system, similar to Apple’s, will be required if it’s going to match its bitter rival. That could prove to be too much of a challenge for the Galaxy Note 9.

An all new camera

Samsung has unveiled two new camera sensors for smartphones in recent days. One is a 12-megapixel Dual Pixel effort that can handle portrait mode effects without needing a second lens, while the other is a slim-line 24-megapixel sensor with the ability to cut down grainy noise and work well in low light.

Either of these could be destined for the Galaxy Note 9. The fact that the 12-megapixel lens is slimmer means it could sit flush to the phone, eliminating the bulging lens seen on existing Samsung phones.

Talk has been rife about Samsung launching a phone with a folding screen. Could it be bold enough to bring tech it’s touted for years to its biggest device?

That’s debatable. But a phone that could be used as a large scale tablet and then folded into a smartphone would be hugely appealing and set it well apart from the competition. Perhaps the Galaxy Note 9 is that product.