How much longer do women have to save to buy a home?

Mortgages can be notoriously difficult to navigate and even more challenging to afford – even before considering the gender pay gap, which takes many women longer to save for a mortgage deposit than their male counterparts.
Share this guide 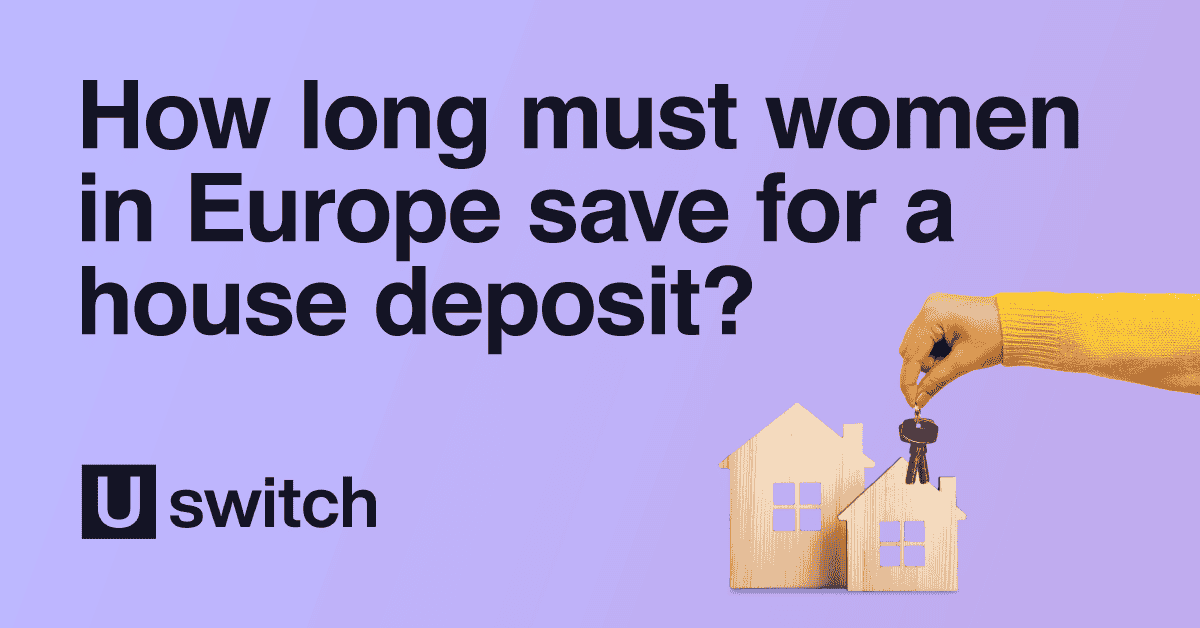 As a result, the mortgage comparison experts at Uswitch were interested in understanding how much gender pay disparity affects women’s opportunities to enter the property market. To find out how much longer it would take women to buy a house in each European country compared to men, Uswitch analysed the average property prices in each European country and compared this to the salary gap between men and women. 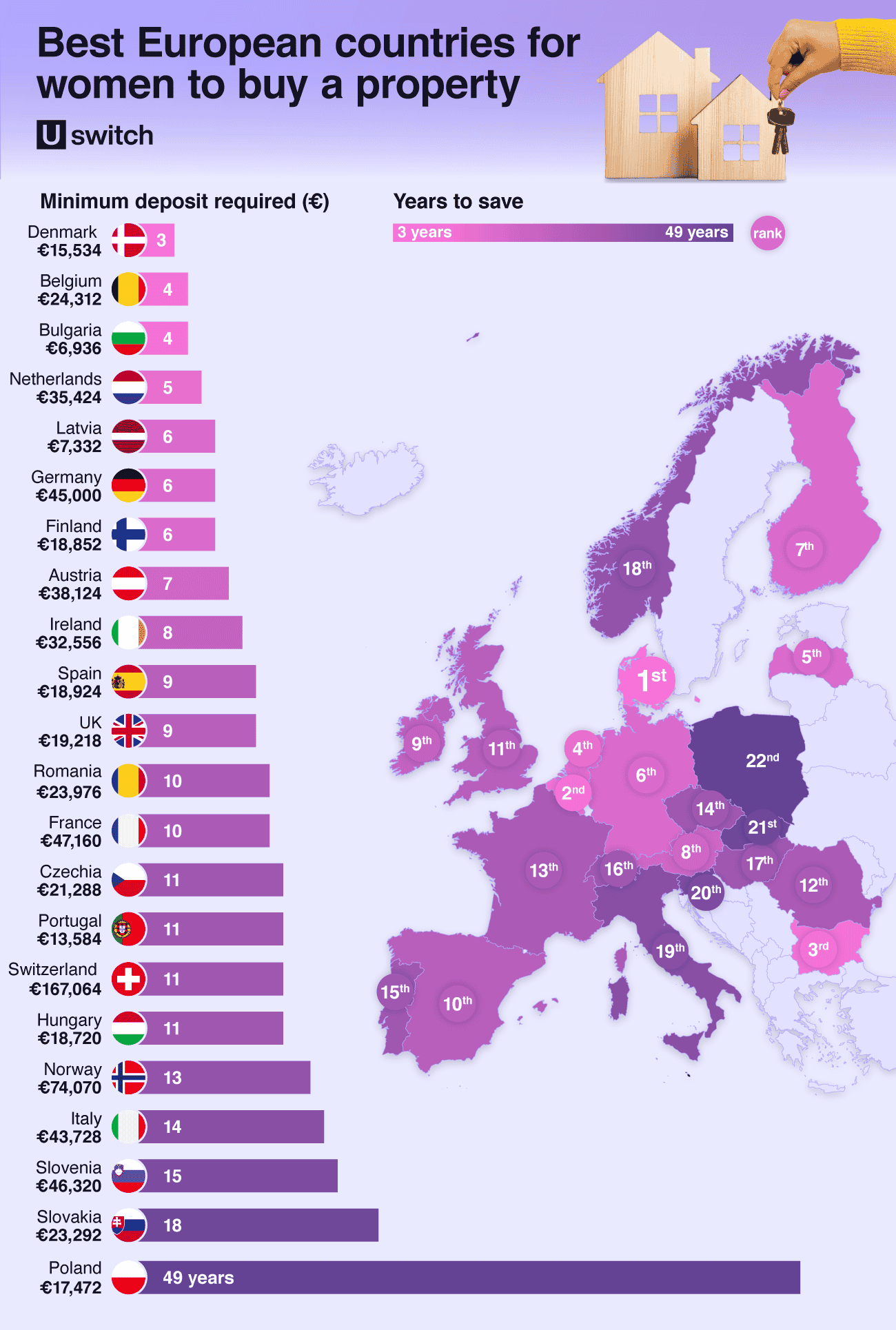 The most affordable countries for women to buy a house

Our research concluded that it takes women in Denmark the shortest period of time to afford a house deposit – just three years. The minimum deposit for a property in Denmark is €15,534, the fourth cheapest in Europe and 79% cheaper than their Scandinavian neighbours, Norway (€74,070).

Despite Danish women having to save for a shorter period than women in other European countries, they still must save for six months, four weeks and one day longer than Danish males. However, this is the third smallest saving disparity between men and women in Europe – with just Belgium (5 months, one week, five days) and Romania (3 months, three weeks, four days) having a smaller gap.

Bulgaria and Belgium come in second place, with women from these countries needing to save for four years in order to afford a house deposit. Bearing in mind Bulgaria has the lowest average property price in Europe (€69,360), Bulgarians also have the most affordable minimum deposit requirement (€6,936). However, despite saving for just one year longer than women in Denmark, Bulgarian women must save for eight months, two weeks and one day longer than Bulgarian men – a 22% increase to the saving disparity seen in Denmark.

Despite house prices being 250% higher than in Bulgaria (€243,120), women in Belgium must also save for just four years. House prices in Belgium are the 11th most expensive in Europe, however, Belgian women have the sixth highest net annual savings (€5,404), meaning that a deposit for a property is more affordable. Women in Belgium must save for five months, one week and five days longer than their male counterparts; however, this is the second smallest savings gap across Europe.

With a saving period of five years, Dutch women will save for the third shortest period in Europe. Women in the Netherlands also have the third highest net annual savings (€6,991) in Europe, 2% less than German women in second (€7,162), and 54% less than Swiss females in first (€15,315). Despite their high savings, Dutch women must still save for one year, one week and three days longer than Dutch men to afford a house deposit – a savings disparity 26% smaller than in Germany (women must save for one year, two months and three weeks longer).

The least affordable countries for women to buy a house

Comparatively, women in Poland must save a staggering 49 years in order to afford a house deposit, 102 months, two weeks and three days longer than men in the Eastern European country (41 years). The average property price sits at around €174,720 and requires a minimum deposit of £17,472. Despite having the fifth cheapest deposit in Europe, the net annual savings between Polish men and women are considerably less than anywhere else in Europe – just €431 and €356, respectively.

Slovakia follows behind, with our research finding that Slovakian women must save for 18 years to afford a house deposit of €23,292 – this equates to 50 months, one week and four days longer than Slovakian males. This is due to the disparity in net annual savings between the two sexes, with women putting away €1,279 (the fourth lowest in Europe), compared to €1,662 for men.

Neighbouring Slovenia and Italy come next, with women from these countries needing to save for 15 and 14 years, respectively, in order to afford a house deposit. Properties in both countries cost €231,600 and €218,640, respectively, with minimum deposits being around the mid €40,000s. Women from both countries set aside €3,000 each year (compared to roughly €3,600 for men), which means that women spend almost two years longer than men to afford a house deposit. 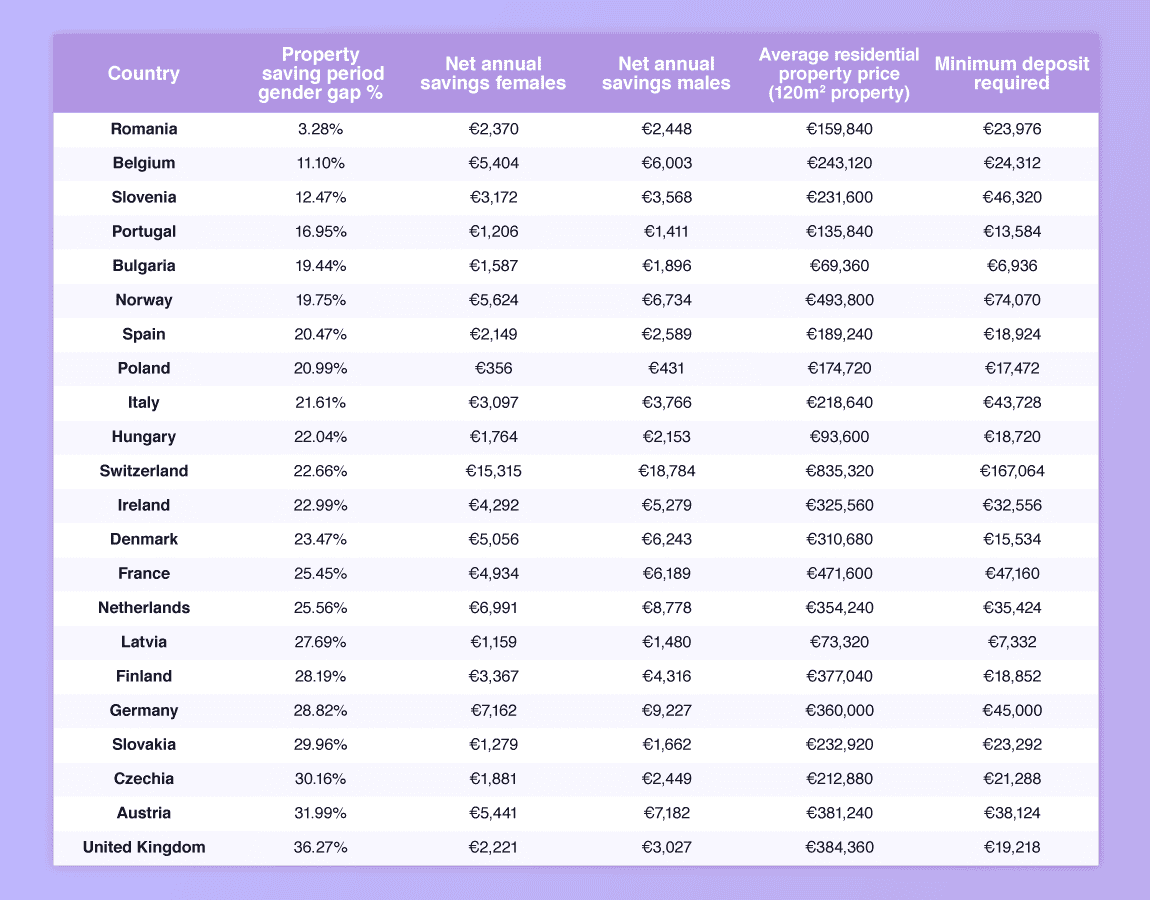 Romania has the smallest saving disparity between men and women 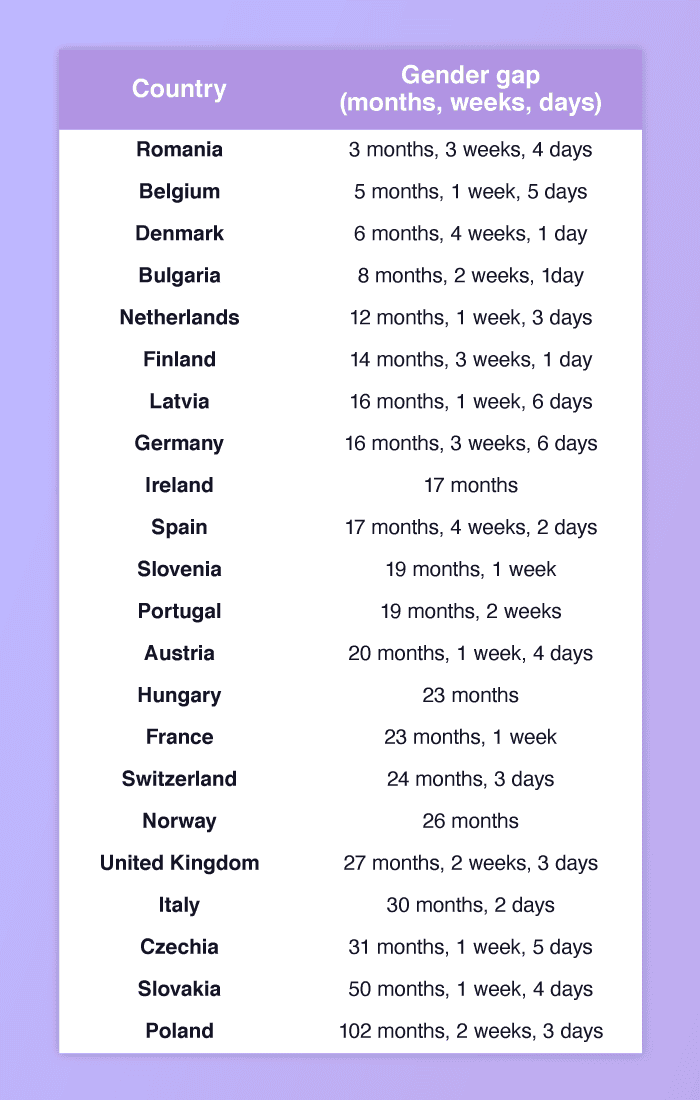 Despite having to save for 10 years in order to afford a house deposit, women in Romania see the smallest savings gap between men and women – just three months, three weeks, and four days. On average, Romanian women save €2,370 annually, just 3.19% less than their male counterparts (€2,448), suggesting that it is a country striving for equality.

Belgium and Denmark also have one of the lowest saving disparities between men and women. The Western European country has a gap of five months, one week and five days between women and men and, following closely behind, the Scandinavian country has a difference of six months, four weeks and one day.

Where do the UK and Ireland rank?

Despite measures put in place to better gender equality in the UK – particularly regarding pay – the UK sits in the middle of the table in tenth place. Women living in the UK save €2,221 annually, compared to €3,027 for men. This means that for a woman to afford a €384,360 property with a minimum deposit of €19,218, it would take nine years to do so, compared to six for men.

Neighbouring Ireland sits ahead of the UK, taking Irish women eight years to save up for a house deposit – one year less than women in the UK. On average, properties in Ireland cost €325,560, resulting in a minimum deposit of €32,556. When Irish women save €4,292 per year – almost €1,000 less than men (€5,279) – it’s no wonder Irish women spend 17 months longer than men to afford a house deposit.

How to save for a mortgage deposit

Our mortgage  expert, Florence Codjoe , gives some handy, actionable tips on saving for a mortgage deposit.

Before you start saving, you must know how much you can afford, as this will determine how much you need to save to purchase a property. Check out our affordability calculator if you’re not sure where to start.