When looking to buy a new car there is a lot to take into account before you make a final decision, including performance, efficiency and comfort. But undoubtedly the most important factor is the cost – not only of the car itself, but also the extra cash needed to run it.

To help discover the running costs of a car, we can reveal a new criteria to help you choose your next set of wheels: cost per mile (CPM). CPM takes into account numerous cost factors associated with owning a car and can determine how much each car costs per mile, as well as the total average annual cost of running your chosen vehicle.

The CPM is calculated using data for the following annual costs: fuel and car insurance, breakdown cover and maintenance, and road tax. As the average UK mileage is 7,400 miles, we then divided the annual price for each factor by this number to reveal the CPM for each of the most popular new cars on sale. 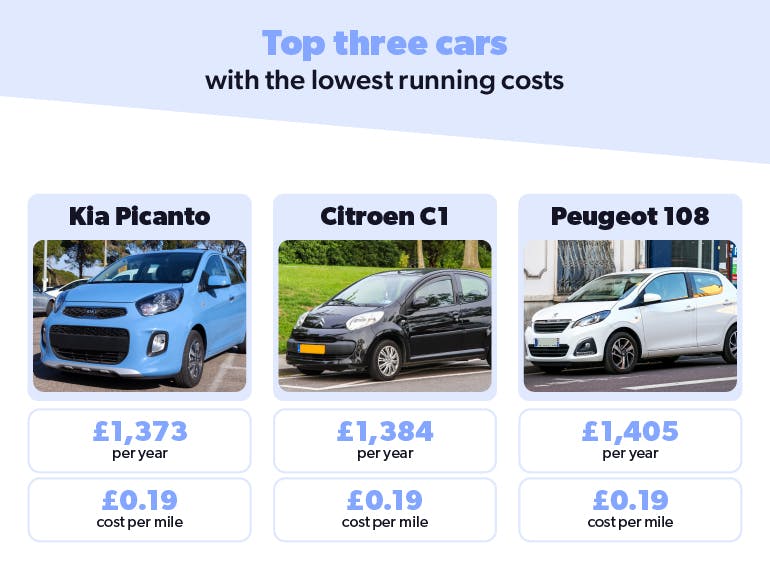 Since its introduction in 2004, the smallest model in the Kia family has become one of the UK’s most popular small cars due to its low cost and practicality. This low cost is reflected in the CPM which is the lowest in the country at 19p or £1,373 per year, with the insurance cost of £232.95 per year a major contributing factor.

Second place in the rankings goes to a French supermini, the Citroen C1. This modern-day answer to the classic cheap-as-chips Citroen 2CV has exceptionally low running costs of less than £1,400pa. This is helped by the fact that it has a high miles per gallon (MPG) and thus only costs £606.83 per year in fuel. It just misses out on number one because it is more expensive to insure than the Picanto.

Another small city car from France is up next with the Peugeot 108 costing £1,405 in annual running costs, this equates to a CPM of 19p. The price of insuring the 108 is just under £246, and maintenance and road tax combined is around £363 or 5p per mile. 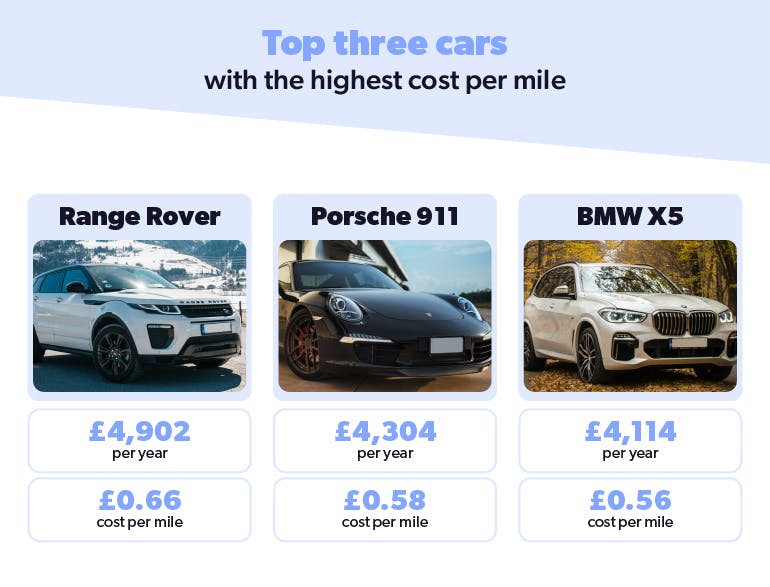 Top three cars with the highest cost per mile

Land Rover’s premium luxury off-roader is the most expensive popular car to run on the market. The Range Rover has annual running costs in excess of £4,900 which equates to 66p per mile. Insurance for the Range Rover is the highest of any car on the list at £1,223. Despite having a diesel engine and a big fuel tank, it will also set you back roughly the same amount in fuel costs.

If asked whether you’d rather have a 911 or a Kia Picanto, most people would gravitate towards the German supercar. However, once they have studied the running costs and CPM figures they might think again, as the Porsche will cost you almost £3,000 more per year. Even the base model has a thirsty, high-performance three-litre engine, setting you back over £1,300 in fuel costs alone, the highest of any car on the list.

The BMW X5 is the third most expensive car in terms of running costs at over £4,100 in a year. The X5 ranks highly for maintenance and insurance, but it is the joint second highest road tax cost of £1,910 which most helps propel it up the rankings. As the diesel engine in the X5 has a much higher MPG than the one in the Range Rover, it will cost over £200 less a year in fuel. 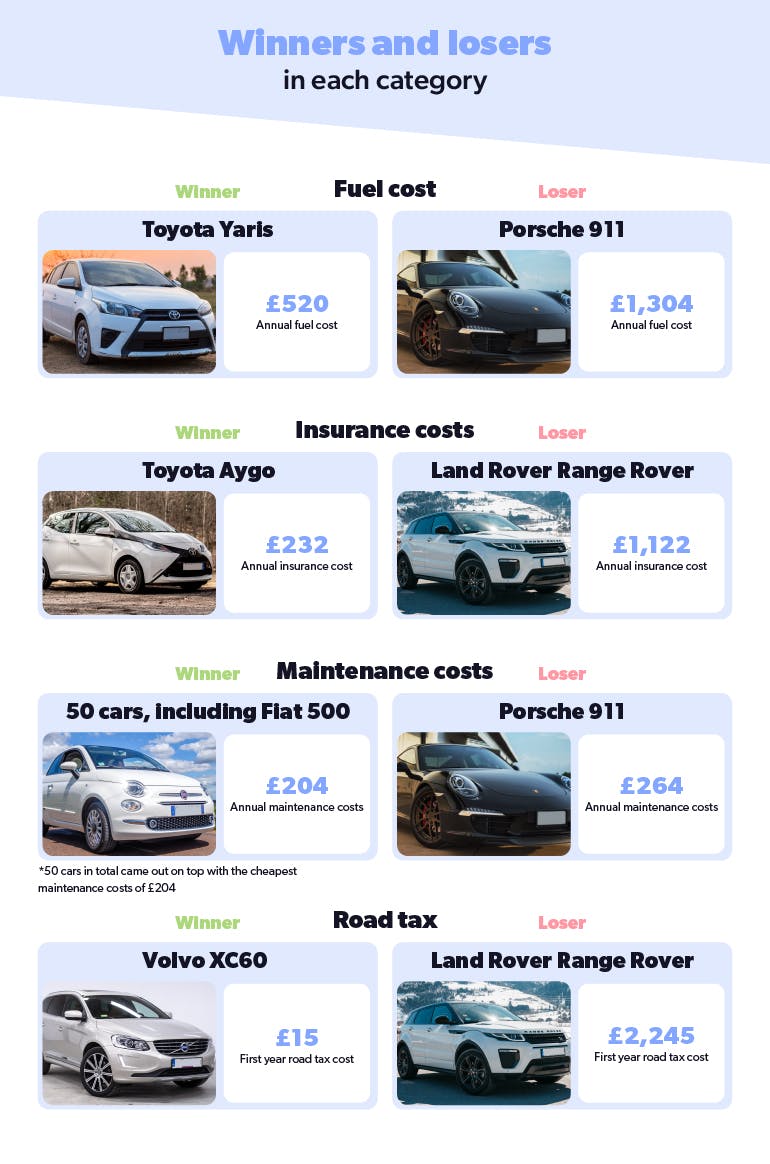 Winners and losers in each category

Although the overall running cost results are clear, each category has its own champions and chumps, with some cars that didn’t feature highly in the overall rankings having a particularly strong score in a specific area.

Fuel cost: The Porsche 911 once again is the most expensive in terms of fuel, with annual costs of over £1,300, which equates to 18p a mile. The 911 has an incredibly thirsty engine and consequently can only reach 27.4 MPG, which is over 40 less than the Toyota Yaris. The small, hybrid-powered Toyota is the joint-cheapest in terms of fuel costs per mile – the 7p cost is equal to just under £520 a year.

Insurance costs: Toyota also manufactures the cheapest car in terms of insurance costs. The smallest car in their range is the Aygo and it costs only £232.01 per year, which is 3p per mile. At the other end of the spectrum is the Range Rover which has an average insurance cost of 15p per mile, this might not sound much more but it equates to annual insurance costs of over £1,200.

Maintenance costs: Over half the cars on the list have the same price of £203.85, or 3p per mile, for estimated maintenance costs. This is due to the fact that they all have small enough engines to qualify for a £149 service. On the flip side, the 3-litre engine in the Porsche 911 means that it requires a more expensive service, ergo the total maintenance cost is the highest on the list at £263.85, or 4p per mile.

Road tax: By a huge amount, the two big Volvos on the list have the cheapest road tax cost. This is due to the fact that all new cars by the Swedish company are powered by plug-in hybrid engines. This eco-friendly power solution means that the road tax cost is only £15 for the year – over £115 less than their next closest competitor. Over £2,200 more expensive in first-year tax costs is the Range Rover, which equates to 30p per mile.

The best and cheapest car insurance quotes can often be helped by getting a black box fitted to your car, or opting for an hourly car insurance policy. 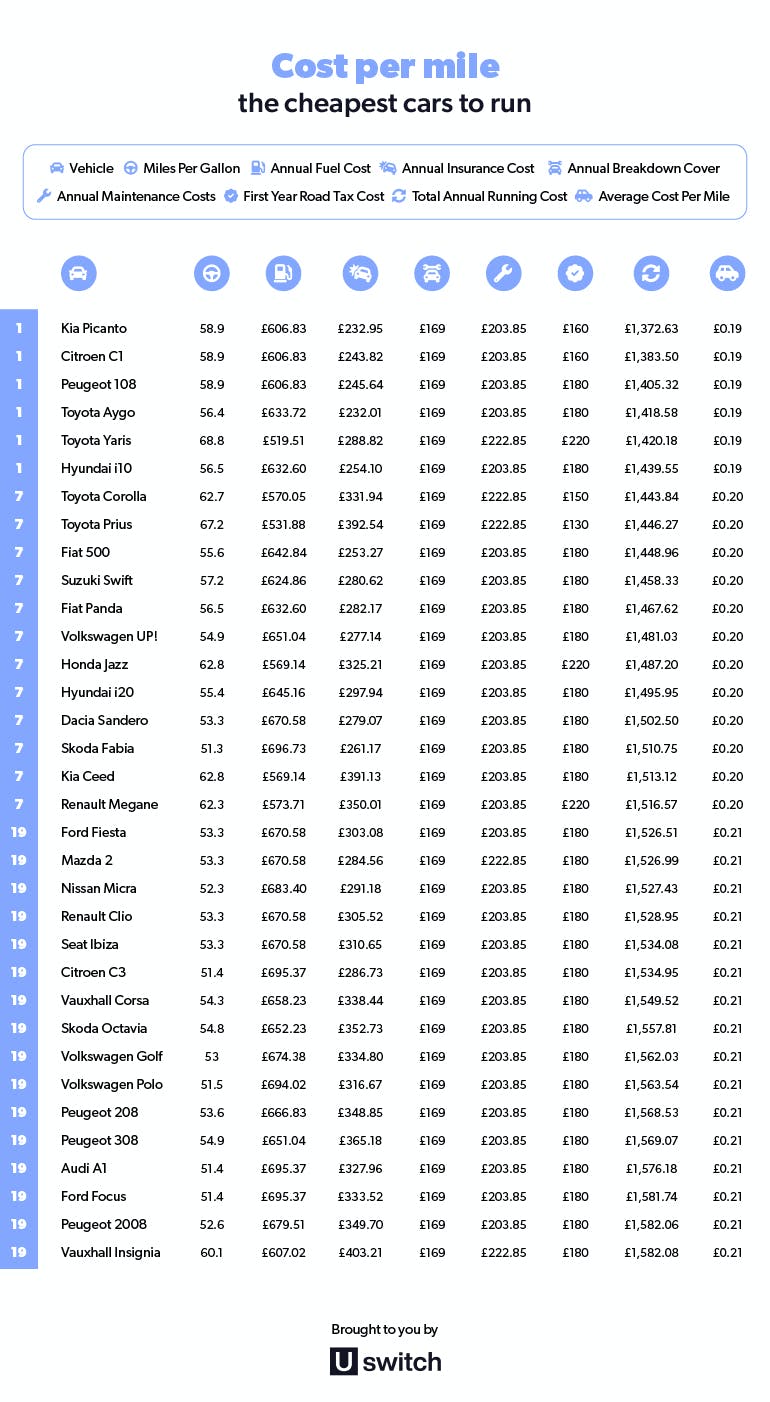 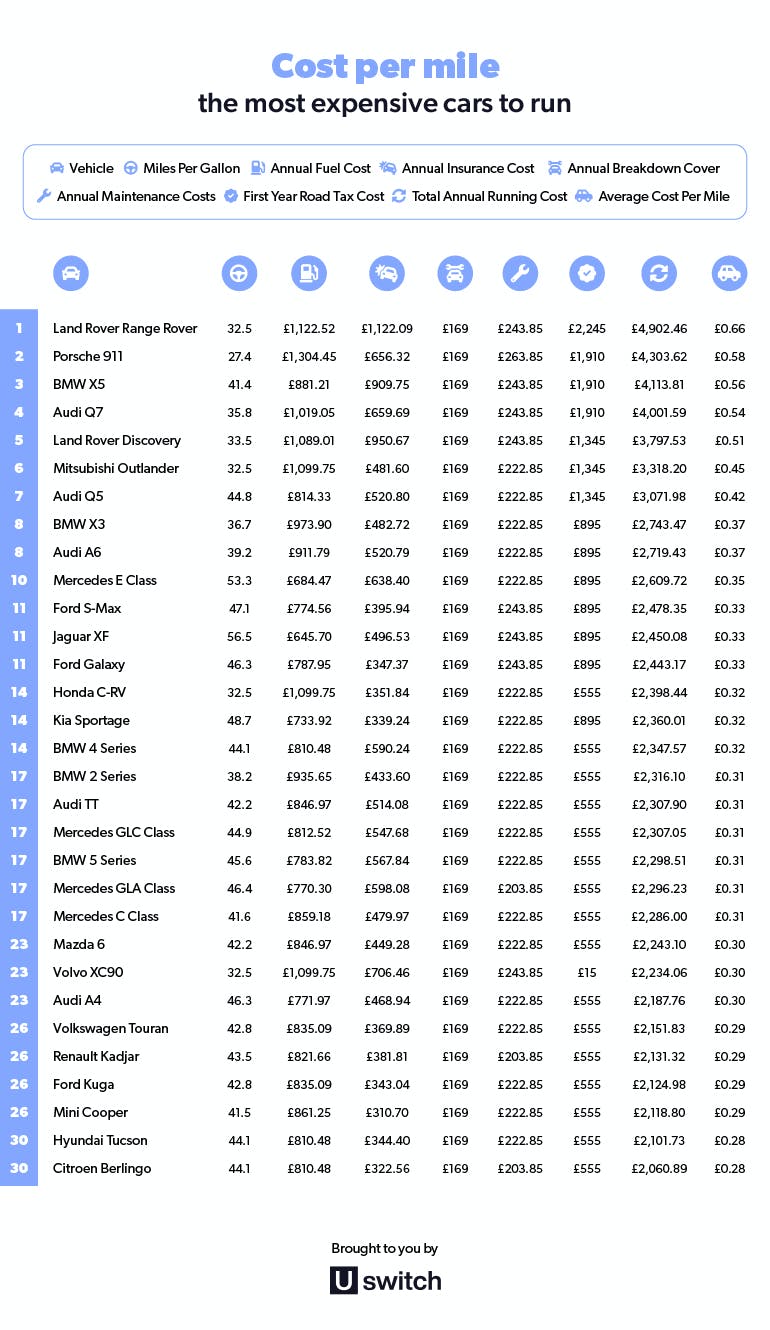 To determine which 100 new cars to study we looked at which models on the road have the most registrations and then removed any which were no longer being produced and sold as new.

The factors we chose to study each car for to calculate the CPM are:

All of these annual factors were then divided by the average mileage of UK drivers, which is 7,400 miles according to the Department for Transport’s vehicle mileage statistics.

Finally, we added together all the costs per mile for each factor to calculate a total CPM for every car model.