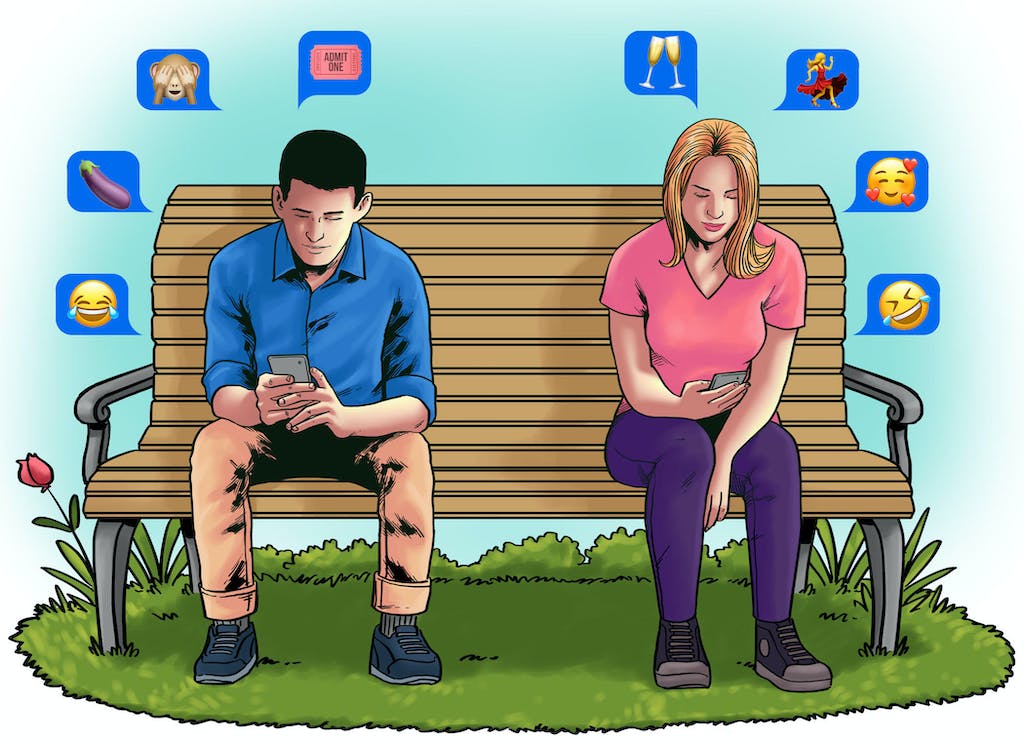 Emojis - The new language of love?

Whether you love them or loathe them, emojis are becoming an increasingly important method of modern communication, with many linguists heralding the cute cartoons as the fastest growing language in the UK. And with a huge global reach, they transcend traditional language barriers, as well as help convey a huge range of meanings and add colour and character to our digital messages.

And with World emoji Day just around the corner, there’s never been a better time to celebrate winky faces, heart eyes and aubergines. At Uswitch, we collected data from 2,000 male and female participants between the ages of 16 and 66+ to find out about their emoji habits. Here’s what we found out:

The top three most common reasons men and women from all age groups use emojis is to communicate or respond to something funny, express anger or convey a sense of ‘cheekiness’.

Whatsapp is the most popular app for participants using emojis regularly (55%) across the UK.

Looking at the number of different emojis used, the most popular answer was between 1 and 4 across the whole of the UK.

A range of skin tones for families are in the most demand amongst those who live in Greater London than other regions in the UK (19%).

Those living in the North East are most likely to send emojis to their significant other or love interest. People from Cardiff use emojis as a form of flirtation more than other cities (15%).

Interestingly, those living in London are the most likely to use emojis on LinkedIn posts and messages than any other region in the UK (15.5%). This may be due to the perception that emojis aren't appropriate for a professional networking site.

Age is just a number

Uswitch’s study highlighted several trends amongst a variety of age ranges. Unsurprisingly, 16-17 year olds are the biggest emoji users, with 31.5% admitting they prefer to use emojis when they ‘can't be bothered to type’. When asking those of ages 66+ whether they feel there is an emoji that accurately expresses how they feel, the majority answered no, with 59% expressing that they prefer not to use them.

The new language of love?

When conducting a mass survey on men and women, we thought it would be interesting to understand if emojis can be used to enhance the dating scene. We’ve put together some key factors when it comes to communicating with a potential love interest (or friends, of course). Below you’ll find the ultimate tool that will offer advice on the best ways to use Emojis when dating.

The differences between men and women

Believe it or not, men are actually nearly twice as likely to consciously decide not to use any emojis (40.5%) than women (23%). Women are also far more likely (55.5%) to use emojis most days in the week over men (36%). Both men and women use Facebook Messenger and Whatsapp the most over the other social media platforms.

We found that the top three emojis men listed when asked what their biggest turn offs would be was a lot more contextual with underlying meaning. 28.5% of men voted the adult emoji to be the biggest turn off, which we can only put down to a meaning of ‘growing up’ or ‘being mature’. The second most voted for was the admission ticket emoji, with 21.5% answering this. According to Emojipedia, Admission tickets literally means ‘admit one’ but metaphorically could have different connotations when speaking to love interests, such as ‘not wanting to see any other people’. 19% of men voted for the Abacus emoji as their biggest turn off. We did some digging and found (according to Emojipedia) that an Abacus, an old fashioned device for literally calculating sums, can actually allude to someone being branded as ‘calculated’.

The ‘how to’ on Emojis for dating

Choose from men or women and select an age range to see how you should be communicating with your love interest.

What we all want to see more of

We spoke with 982 men and 1018 women across the UK to discover and understand the differences between men and women when it comes to emoji usage. Breaking down the top three most voted for emoji categories, it was clear both men and women would like to see a wider variety of different emojis.

You spoke, so we listened

Having analysed the data, we decided to create what the next new three emojis might look like:

Family skin tone variations are not yet an option in the emoji keyboard. Emojipedia has created them here. It’s clear that people are hoping to see these variations appear in the new emoji release this year and rather unclear as to why this is not already an option.

Just like the variations of the skin tones on most emojis, it’s apparent there are no body type varieties when it comes to emojis. We’ve redesigned two commonly used emojis to have four types of body type variations, which hopefully will become a real option too one day.

We also decided to have a look at which animals are not currently available in the emoji library. Despite the many animal options, we noticed there isn't a meerkat, ostrich or crow.

No matter what social media platform you use to send and receive emojis from friends, family, colleagues or your other half, getting a great phone deal can help you send as many as you like without having to worry about using up your data. Opting for a contract or SIM-only deal with high data usage allowance will allow you to send as many emojis as you want! To check out our best deals, look at Uswitch’s mobile phone deals comparison tool.