We explain what the Bank of England base rate is and how it affects the cost of your mortgage to help you avoid paying more than you need to.
Share this guide

If you’re on a variable-rate mortgage – one with an interest rate that can go up or down rather than being fixed – the Bank of England base rate will have an impact on how your rate changes and how much your mortgage repayments will be. It also determines the cost of borrowing in the market as a whole.

What is the current base rate?

Since then it has been rising.

The Monetary Policy Committee (MPC), which sets the base rate, usually meets every six weeks to decide what should happen to it and announces its decision the next day.

However, in times of crisis it can meet more frequently - with the two cuts responding to the Coronavirus pandemic decided before its scheduled meeting on 25 March 2020.

What is the Bank of England base rate?

The amount UK banks charge their customers for borrowing money is often influenced by the current base rate. As a mortgage is a form of borrowing money, any change in the Bank of England base rate is likely to affect your mortgage interest rate.

How you’re affected will depend on the type of mortgage you have. Your payments won’t be affected if you have a fixed-rate mortgage until your fixed period ends. But be careful if your fixed-rate period is coming to an end soon.

Once your fixed-rate deal ends, you’ll be moved onto your lender’s standard variable rate, which is likely to be higher. It’s usually a good idea to get a new deal at this point to avoid paying interest at a higher rate.

If you have a tracker mortgage, discounted mortgage or standard variable rate mortgage, your rate is likely to change in line with the base rate. Your bank will notify you of any changes to your mortgage repayments in advance.

You might have also heard the Bank of England base rate referred to as the UK interest rate.

Banks will often set their own interest rates based on the current UK interest rate. How the rate impacts you will depend on whether you’re borrowing or saving money with your bank.

If you’re borrowing money through a mortgage or loan, your bank will charge you interest for borrowing that money. The interest rate is what is used to calculate the actual amount you’ll be charged. It’s a percentage of the total amount borrowed.

For example you might borrow £100. If the bank’s annual interest rate is 1%, you’ll pay £1 in interest over a year.

An increase in the current base rate is typically a bad thing if you’re borrowing money as your bank is likely to charge you a higher rate of interest, meaning you pay more.

When you save money, the bank will pay interest to you. That’s because, when you save, you’re handing your money over to the bank. This means you’re effectively lending the money to it so it needs to pay you interest for borrowing the money from you.

If you’re saving money, a rise in the UK interest rate is likely to benefit you as you’ll be earning more from the higher interest rate.

When does the base rate change?

The Bank of England reviews the base rate eight times a year. The next MPC base rate announcement is set for 16 June 2022.

In the review the Monetary Policy Committee makes a decision on whether the interest rate will increase, decrease or remain stable.

The base rate does not change every time the Bank of England meets. Interest rates were on hold at 0.1% from March 2020 to December 2021 before they started rising again.

Lowering the interest rate has the opposite effect, encouraging people to spend more, but this can lead to inflation. Inflation is the rate at which the prices of goods and services increase. A high inflation rate means we end up paying more for the things we spend our money on than previously.

Because of the effect a change in the base rate can have on people’s spending habits, the base rate is a key part of maintaining a stable economy.

Bank of England base rate history

Historically, interest rates have remained relatively stable throughout UK history since the Bank of England was founded in 1694 but certain periods in base rate history stand out:

The graph below shows how the base rate has changed since 2012: 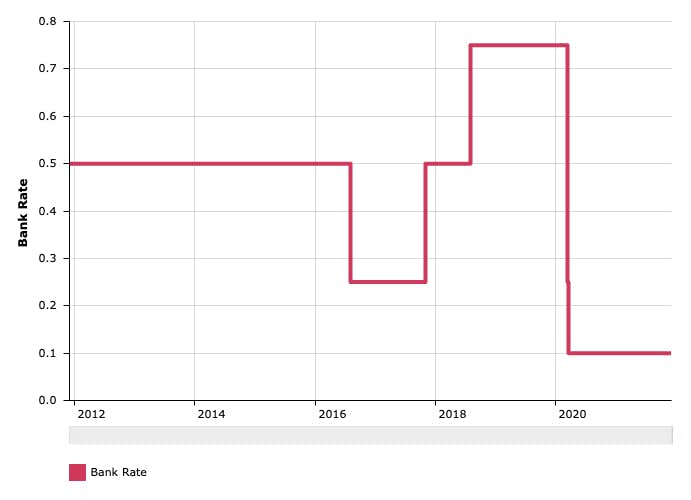 Here’s how the base rate has changed since 2006, starting from the most recent change: