Study reveals: The most cultured spots in Europe

Europe is world renowned for being filled to the brim with history, art and literature. From the Louvre in Paris to Brandenburg Gate in Berlin, it seems you're never much more than a stone's throw away from something culturally significant.
Share this guide 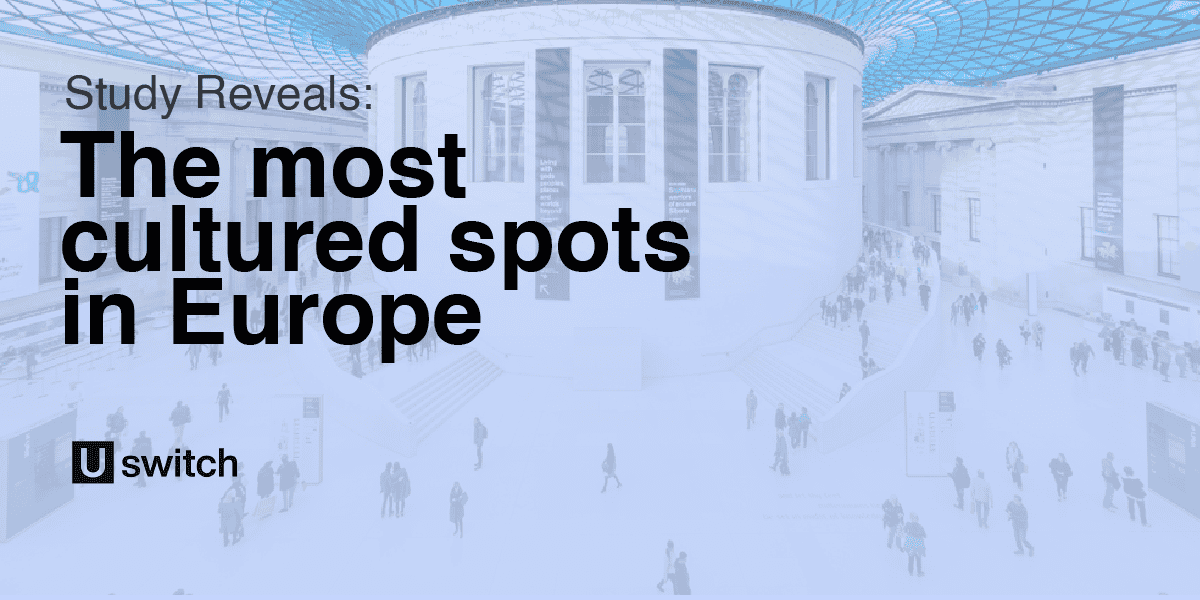 The mortgage comparison experts at Uswitch wanted to determine just which city in Europe was the most cultured. To do this, they looked at how many museums, theatres, landmarks and cultural tours each city had per 100,000 residents. Each city was then given a score ranked out of ten.

The top 15 most cultured cities in Europe 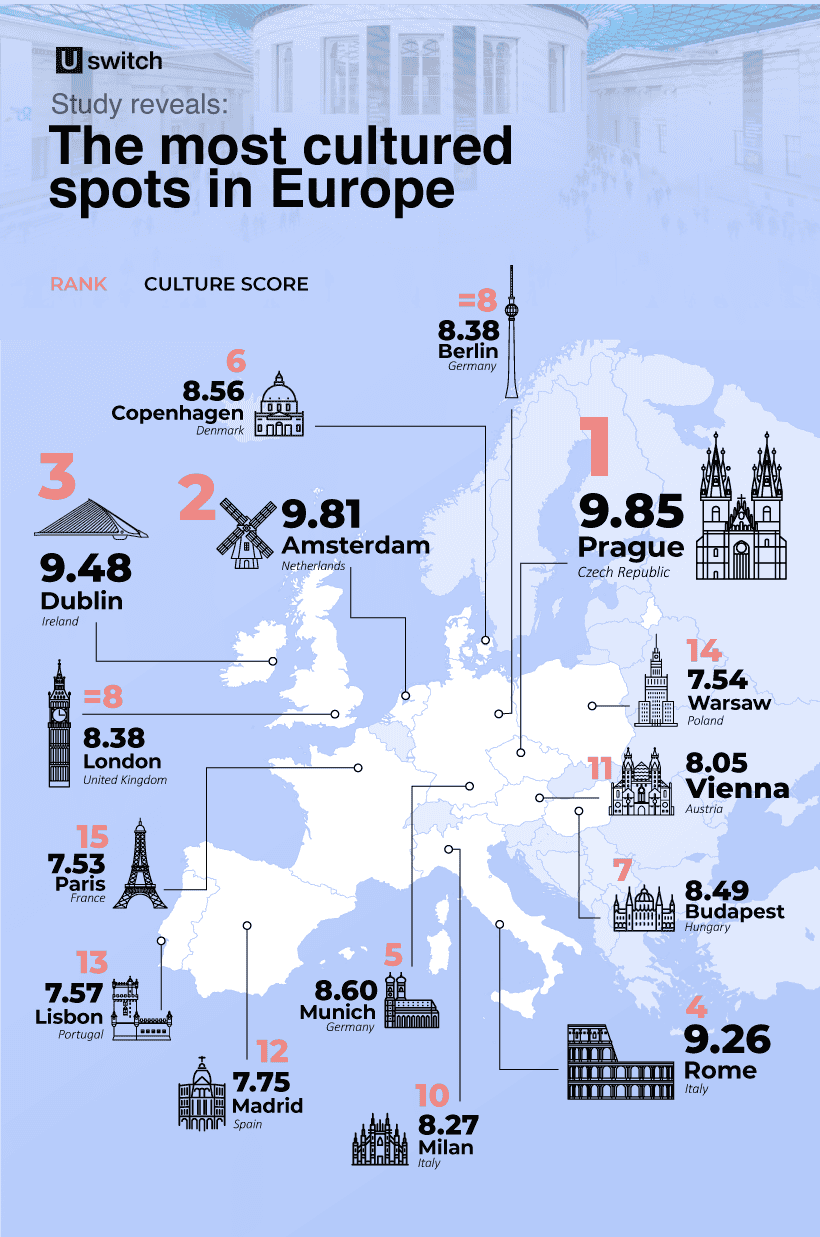 Renowned for its beauty and culture, Prague is in first place of the most cultured cities in Europe. A stroll through the city can take you through one of the 200 historical parks on offer and gardens dotted throughout the city. There are also plenty of landmarks to stop by, such as the iconic Dancing House, with almost 15 per 100,000 people.

If you want to take in the breathtaking views of the city as well as the calm and fresh atmosphere, opt for one of the cultural tours (nearly three on offer per 100,000 in the city).

All of this on offer, and more, has awarded Prague with an almost perfect 9.85 out of 10.

Amsterdam is a city of art, and there are plenty of museums to see it in. The Rijksmuseum, the national museum of the Netherlands, is just one of almost eight museums for every 100,000 people.

Amsterdam is also known for its monuments, buildings and parks such as the Royal Palace, Rembrandtplein and the Vondelpark. In fact, there are 9.3 landmarks per 100,000 people.

Because of this wide array of cultural spots, this city comes in a very close second place with 9.81 out of 10.

Dublin is a vibrant and historical city. From the traditional Irish pubs where you will often find the iconic Guinness, one of the world’s most popular drinks, and live music, you’ll never run out of things to do.

Dublin earned its highest score in landmarks per 100,000 people, with an impressive 8.5. These include cathedrals such as Christ Church and St Patrick’s, and historical buildings like Kilmainham Gaol Museum.

Rome is a jewel in Italy’s cultural crown. It has historical icons like the Colosseum that provides a rare chance to stand on ground once trod by gladiators and emperors. These types of landmarks are part of 14 per 100,000 people, more than double Munich’s result in fifth place.

You can also take a trip through history on one of the cultural tours available throughout the city as there are almost six available for every 100,000 people - the highest in the top 15!

Rome is also home and host to a variety of festivals every year, from music to food, so something exciting is happening. All this art and history has scored Rome 9.26 out of 10.

Whether you’re into seasonal festivals or the rich history of the area, Munich has something for everyone. The Marienplatz has been the city's main square for more than 800 years but throughout the whole city, there are over six landmarks for every 100,000 people.

After visiting these landmarks, you can take a trip to one of the city’s many museums - there are almost three per 100,000 people. Due to this wide array of activities and delights on offer, Munich scores 8.60 out of 10.

Copenhagen is the happiest city in the world, and it’s easy to see why. Filled to the brim with arts and culture, it’s impossible to have a dull day. If the weather permits, you can join a cultural tour of the city (there are 1.7 available for every 100,000 people) to enjoy all the sites it has to offer.

Copenhagen is also home to a host of museums (3.5 out of 100,000 people), such as The National Museum of Denmark which not only has a vast permanent collection, but also guided tours to give you all the details about the artwork you see. With all this on offer and more, Copenhagen scores 8.56 out of 10.

After a long day exploring the city, you can relax and unwind in the Szechenyi baths - one of 8.7 landmarks per 100,000 people in the city. There are more than 1,000 natural hot springs in Hungary, and this is the most famous, with 21 pools of different temperatures to choose from.

There is a tie for eighth place - London and Berlin. The city of London has existed, though not as we know it now, for more than 2,000 years. With around 30 million tourists visiting each year, London is a melting pot of cultures, which could explain the numerous museums and galleries, such as the British Museum and the Tate Modern, as well as the bright lights of Thearteland in the West End.

Similar to London, Berlin has a vibrant nightlife and party scene. There is also a vast array of theatres, where you can enjoy anything from circuses to concert halls, serious plays and stand-up comedy. All in all, Berlin and London both score 8.38 out of 10.

Milan is in tenth place for the most cultured spots in Europe with an overall score of 8.27 out of 10. A cultural walk through the city (0.6 available per 100,000 people) can take you from Gothic to Futuristic in the architecture alone.

Throughout Milan there are also 7.3 landmarks for every 100,000 people. This includes the Duomo– the largest and most elaborate cathedral in all of Italy. A gothic, pink-tinged building that dominates the skyline.

Vienna, located in the heart of Europe, is filled with history and art. There are more than 1,000 landmarks all over the city that are open to the public as well as over 100 theatres. Alongside all of this, Vienna is in the top 10 for the European cities with the most beautiful homes.

There are also over 150 museums in Vienna, covering almost anything you could possibly want to learn about. With all this on offer, and more, Vienna scores 8.05 out of 10.

Madrid is filled with parks and open spaces that undo the smothering nature of some cities. Arguably the most impressive of these in Madrid is the Casa de Campo, which you can visit during one of the many cultural walks available in the city (almost one for every 100,000 people).

You can also learn all about the history of Madrid at one of 100 museums in this capital. This earns Madrid an overall cultural score of 7.75 out of 10.

Spanning seven hills, Lisbon is one of the oldest cities in the world, surpassing London and Rome by hundreds of years. Lisbon is dripping in history with sites such as the Monastery of the Hieronymites and the Tower of Belém (a UNESCO World Heritage site). There are two museums and four landmarks like these for every 100,000 in the city.

With all the history, stunning views and almost three cultural tours per 100,000 people available here, Lisbon scores 7.57 out of 10.

Warsaw is in 14th place on our list of most cultural cities in Europe, with a score of 7.54 out of 10. It has its highest figure for the number of landmarks dotted around the city, nearly five per 100,000 people.

Warsaw was also the home of Chopin, and the city is proud to demonstrate this. There is the Chopin museum, where visitors can learn about his life and works. Some of the theatres in the city (a total of 0.4 for every 100,000 people) also play his music in the evenings and truly celebrate his great legacy.

Rounding out our list is Paris in 15th place. From the iconic Eiffel tower to the world renowned Louvre, there are plenty of landmarks to experience in this city - three landmarks for every 100,000 people.

Paris is also the home of fashion and celebrates this with its numerous museums (over one per 100,000 people). The, arguably, most iconic of these is the Palais Galliera, which is home to The Gabrielle Chanel Rooms.

Thanks to these iconic offerings, Paris scores 7.53 out of 10.

Choosing the right city to settle down in

Mortgages expert, Florence Codjoe outlines what else you need to think about when choosing the right city to settle down in:

“If culture is at the top of your list when it comes to finding your perfect home location, then this list is perfect for you! As well as looking at the history and society of the city, you also need to consider:

*Data was collected from TripAdvisor between 15th – 16th February 2022.

1Population estimates account for the total “metropolitan” population rather than the administrative boundary population. New Delhi's population has been corrected to the 2021 figure provided by the United Nations.