As we prepare for the possibility of UK roads being blasted by rain, sleet and snow, some drivers may start to become anxious about driving.
Share this guide 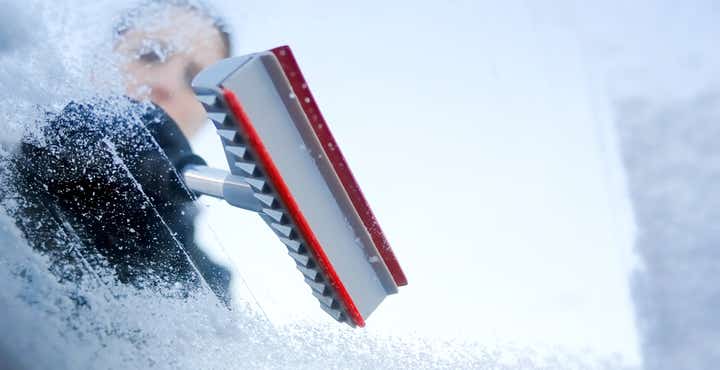 Scraping snow off the windshield

With Google being a go-to for popular driving questions, it’s no surprise that terms like ‘Can I legally drive in wellies?’ and ‘How can I remove ice from my windscreen?’ receive a lot of search volume during winter months.

To help motorists stay safe on the roads and ensure their insurance is valid, here at Uswitch we've debunked 9 winter driving myths to set the record straight.

“Drivers often feel less confident on the road during the winter, as there can be a lot of uncertainty when it comes to the law.

When faced with driving during hash weather conditions, we urge drivers to prioritise their safety before heading out on the roads, as not only could you increase the risk of a road accident, you could also invalidate your car insurance and face a fine or penalty points on your licence.”

1. You can be fined if you leave your engine running to defrost the windscreen

The gruelling job of de-icing a frozen windscreen is about to become part of every motorist’s routine as winter approaches, however, it’s important to avoid this common mistake.

Whilst many believe this is a myth, if you’re caught leaving your engine running on a public road to defrost your windscreen, you could be slapped with a fine.

The act breaks rule 123 of the Highway Code and is an offence under regulations 98 and 107 of the Road Vehicles (Constructions and Use) Regulations 1986. Motorists who are caught could be charged with a fine of £20, whilst those who refuse to turn the engine off will see it doubled to £40.

However, if you’re lucky enough to have your own driveway, you won’t be committing an offence, but de-icers and scrapers could be a more environmentally friendly way to defrost your windscreen.

2. Winter tyres can invalidate your insurance

Many drivers have winter tyres fitted as they can be safer when driving in harsh weather conditions.  This is because the rubber on the tyres operates more effectively in conditions below 7 degrees, and they have tread patterns that shift surface water quicker.

Whilst having them fitted can be categorised as a modification, which should be declared to an insurer, most UK insurance providers are signed up to the Association of British Insurers (ABI), Winter Tyres Motor Insurance Commitment. This means you don't have to notify your insurer because they deem the tyres safer at this time of year.

It might be worth double checking though, as there are still a small number of insurers that aren’t signed up to the ABI's commitment. So we advise contacting them if you’re unsure and plan to have winter tyres fitted, to avoid your insurance being invalid.

3. Using hot water to de-ice your windscreen will crack the glass

Whilst flicking on the kettle may seem like a quick fix to removing ice from your windscreen, it can most definitely damage the glass.

Experts at glass repair company, Speedy Glass, state that putting boiling water on a frozen windshield will not cause the windshield to immediately shatter, however, it can cause small cracks to appear which might weaken the glass.

Vehicle windshields are constructed using laminated safety glass, which is a piece of polyvinyl butyral between two or more pieces of glass. This means that there is a good chance of your windshield cracking further if it already has a small chip or crack, as the vapour or liquid can seep into the opening and when refreezing occurs again, the liquid expands causing further cracking.

Alongside hot water, credit or bank cards can also expose your windscreen to damage if used to remove ice. Not only could it snap your card, it could also scratch the glass on your windscreen, which will need to be repaired. If there is damage anywhere on the windscreen which is 40mm in size or bigger, your car will fail its MOT.

Most importantly, it’s illegal to drive with a crack in your windscreen and you could face up to three penalty points and a fine if you’re stopped by the police. If you have an accident, you could be charged with a more serious driving offence, and your insurance will be invalidated.

4. It's illegal to drive in wellies

Whilst it’s not illegal to wear wellies at the wheel, it's the responsibility of drivers to ensure their footwear is suitable and that they have full control of their vehicle at all times.

Rule 97 in the Highway Code states that motorists should ensure 'clothing and footwear do not prevent you using the controls in the correct manner'.

If your wellies don’t give you full control and you can’t feel the pedals, it’s best to swap them for a more appropriate pair of shoes. You could risk invalidating your insurance if you’re involved in an accident wearing shoes you know are creating difficulty for you whilst driving.

5. Driving with snow on your number plate is illegal

Whilst the windscreen and mirrors are the main priority when it comes to removing snow and ice, leaving your number plate concealed could land you in a spot of bother.

If you head out without clearing it, you are breaking the law and could face a fine of up to £1,000. The rules apply to both the front and rear plates, so remember to check the back of your vehicle too.

When your registration plates are covered, it blocks you from being picked up by speed cameras and obscures them from view of police, who use your reg to check if you're taxed, insured, and have a valid MOT.

Alongside registration plates, it’s also illegal to drive with snow on your lights, mirrors, roof, and all of your windows.

Rule 229 of the Highway Code states that: ‘...you MUST be able to see, so clear all snow and ice from all your windows'.

And that's not just the part of the window in front of you - police have the right to stop and fine you £60 if any of the screen is obstructed.

6. Leaving your car's engine running to warm up on a cold morning invalidates your insurance if your vehicle is stolen

Most insurers have a 'keys exclusion' clause written into the small print, which states that if your car is stolen while left unattended with the engine running, you won't be covered.

When your car is stolen in this situation, it’s often referred to as ‘Frost-jacking’. It’s not just when you’re letting your engine warm up either, your vehicle could be frost-jacked when you are dropping the kids into school, or simply popping to the post box with or without keys or a car fob.

Whenever you leave your car engine on and unattended, you could be inviting criminals to take your car from you, and your insurer cannot be expected to pay out.

The law states that drivers are expected to always be in control of their vehicle while the engine is running, even when they're de-icing the windows or letting their car engine warm up.

7. Your insurance could be invalid if you damage your car driving through flood water

It’s always important to check the small print, as many insurers won’t cover you if you damage your car if you drive through flood water when on the roads. Flood water damage generally falls into two categories: avoidable and unavoidable.

How your insurer classifies each will determine if they are likely to pay out for a claim for flood damage.

Attempting to drive through flooding could be classified as avoidable and therefore not covered unless you were already cut off by rising water. In a typical car, if the depth of water is more than 4-6 inches (10-15cm) - it's best not to attempt to drive through it.

If your car is flooded where you usually park, they will usually class this as unavoidable flood damage and should cover the cost of repairs, but it might be worth double checking if there is a high chance of this happening in your area.

8. There’s a higher risk of being involved in an accident during winter because there are fewer hours of daylight

The most obvious danger of night driving is decreased visibility. The distance you can see is shortened and hazards can often seem to appear out of nowhere. It also takes time for the eyes to adjust to the darkness after being in a lit building or after driving on a well-lit road.

Research from The Royal Society for the Prevention of Accidents (RoSPA) states that 40% of road collisions occur in the hours of darkness in the UK, with 37,483 reported casualties in 2018. However, when driving in darkness is paired with extreme weather, conditions can be extremely dangerous for those on the road.

In 2017, the Department for Transport reported a 22% increase in motorway accidents during hours of darkness when there were snowy or icy conditions.

It’s important to stay alert during winter months, and pay extra attention when daylight is in short supply.

9. You must switch on your fog lights when it’s snowing

Knowing which lights to use in treacherous conditions often leaves motorists confused. Many drivers will put their fog lights on at the slightest dip in visibility, prompting the rest of us to question the correct procedure.

According to the Highway Code, you should only use your fog lights on your car when visibility in front of your car reduces to below 100 metres. Switching them on when visibility is more than 100 metres could put other road users at harm by causing visibility issues - and even invalidate your insurance if you’re involved in an accident.

If your visibility is severely harmed by heavy snow, then by all means, switch your fog lights on, but if snow has settled and you aren’t struggling to see, then the lights will dazzle other drivers and could increase the risk of a collision.

To be able to drive your friends and family's cars, make sure you have a multicar insurance policy and are named for the car you're driving.