There are a lot of factors to consider when buying an electric vehicle, including the cost of insurance. Find out what are the top ten cheapest electric vehicles to insure are right now.
Share this guide 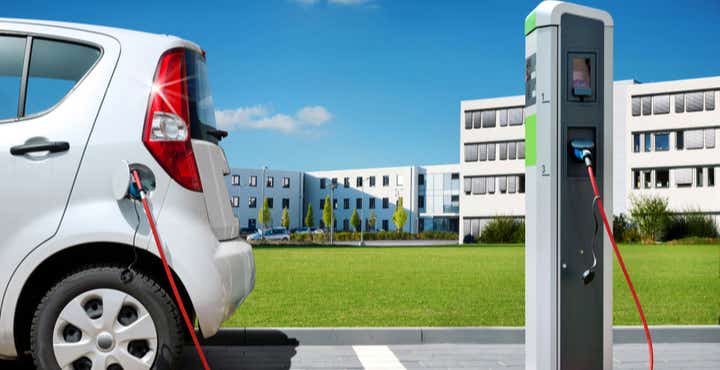 There are lots of factors to consider when buying an electric vehicle, not least the cost of insurance. As the technology is new and insurers do not have a long record of claims, insuring an EV car can be expensive. However, you can choose a cheaper model to insure if you want to save money on your EV insurance. Read on to find out what are the ten cheapest electric vehicles to insure.

Electric vehicle (EV) registrations are bucking the prevailing trend in new car registrations. Whereas sales of diesels and petrol cars fell in the year to October 2021, by 46% and 15% respectively, there was an 86% uplift in new electric cars. October alone saw 24,537 new registrations of electric and hybrid vehicles.

This suggests the tide is turning with EV driving range, that traditional bugbear for sceptics. As it is, a standard EV now has an average drive range 200-250 miles. Also, you can now get an 80% recharge - that’s 200 miles - in from around 15 minutes to 30 minutes depending on the spec, or of course overnight at home, which beats queuing at the pumps any day.

Why buy an EV?

The legislative wind is blowing very much in favour of electric vehicles. Here are a few reasons why:

Are EVs more expensive to insure?

In 2021 online car marketplace Heycar conducted research into the cost of car insurance premiums and found that EVs are cheaper to insure than like-for-like conventional models. In the case of a Nissan Leaf, owners paid £156 less on average than a similar spec Ford Fiesta, so the cost of insurance shouldn’t be a barrier.

As well as checking your insurance with comparison websites like Uswitch, some manufacturers have arrangements with certain insurers, like Telsa and Direct Line.

Are EV batteries an issue?

There’s still a bit of prejudice about the longevity and reliability of batteries, but most manufacturers offer warranties of five or more years, or 100,000 miles.

Despite these generous conditions, most batteries are expected to last ten years, which is also the average lifespan of an EV, according to Autoexpress. This degree of confidence in the car’s battery has a positive effect on premiums.

Electric vehicles are still relatively pricey, although the market is far more competitive than it used to be. Many drivers take advantage of car finance deals to fund their purchase of an EV.

Arrangements such as leases and personal contract purchase (PCP) agreements are especially popular. With a PCP contract you’re spared the worry of depreciation. This factor would certainly shave a fair proportion of your car’s value at the end of a typical contract term, of say 36 or 48 months, which is a major reason why finance agreements are so common.

Bear in mind that at this point the car and its battery would be expected to be a third or more through its lifespan. With a PCP plan you simply walk away and start a fresh contract on a new car.

Car valuer Parkers says the cost of getting a new electric vehicle on contract is falling. In recent research, published in November 2021, it identified ten popular EVs that could be leased or secured under a PCP deal for less than £320 a month.

These included the VW ID.3 and the Mazda Kona Electric. By way of comparison, Parkers estimates a Nissan Leaf can be leased for from £273 a month, while the similar spec petrol-driven Ford Fiesta would cost from £309 a month.

Insuring an EV is straightforward

We’ve profiled the top ten cheapest all-electric cars to insure. The list changes constantly because new models are coming to market on a weekly basis.

Of course, our rundown can only provide a guide to the cheapest. How much you pay for insurance cover depends on your job, where you keep the car, your driving profile and history as well as the EV in question.

To keep things simple and more relevant to most drivers we’ve excluded those quirky models that aren’t really all that practical. Instead, we’ve stuck to four seats minimum and a charge range of 70 miles plus.

For this reason, there’s a couple of EVs that don’t make the cut. The electric Renault Twizy is high on fun and can get you to and from work, but as an everyday choice it’s not practical, certainly for a family. Likewise, the Smart EQ Fortwo doesn’t make the grade. It’s not as cosy as a Twizy but it’s still a two-seater.

The following are among the cheapest family-friendly electric vehicles currently available (as of November 2021). All price ranges are shown after the government’s £2,500 plug-in grant has been applied.

Volkswagen has been producing an electric version of its Up city car since 2013. Since then, it’s refined the e-Up on more than one occasion. The latest version was released in 2020 and although it looks largely the same, bar a new corporate logo at the front and back, there’s more going on under the bonnet. A new larger battery, which has 70% more capacity than before can only help if you fancy a longer drive than just scooting around town.

Bought new the Smart ForFour Electric isn’t cheap for its size, but it is reliable and comes with a number of features that have contributed to its popularity since launching in 2016. It has a tight turning circle, is inexpensive to run and a breeze to manoeuvre. These benefits make it ideal for urban environments, where the tiny battery – which can power the car for up to 80 miles – is less of an issue. On this point, it takes less than three hours to recharge using a home wall box, which is convenient.

Another veteran EV, the Hyundai Ioniq packs a lot into its sleek frame. The car underwent modifications in 2020 to improve performance by way of an enhanced battery, which has boosted its range to 194mph. The Ioniq can be charged to 80% in under an hour, and a useful app is available to help organise your charging schedule and inform you if your planned destination is within range. The Ioniq features a range of attractive features, including 16-inch alloy wheels, a rear spoiler with integrated LED brake lights and chrome finish window surrounds.

The Renault Zoe has a handy range of up to 245 miles, a top speed of 87mph, and is designed with comfort for driver and passengers alike in mind. Peace of mind is provided by the five-year warranty, which is quite a statement of trust from the manufacturer. The Zoe has been around since 2012, although the latest version was launched in 2020 and picked up Best Small Electric Car award at the Parkers New Car Awards 2021, which more than hints at the potential of this EV.

It does no harm to include a larger SUV among the list of cheapest EVs to insure, not least if you have a large family. This sporty-looking number, Mazda’s first fully-electric vehicle, was launched in 2020 and received an upgrade early in 2021. As you’d expect it’s one of the pricier models in this list, but not too expensive to lease. It takes around five hours to fully recharge using a home charge point, and can fill up to 80% charge in just 36 minutes using a 50kW public charger. The 124-mile range can be extended, Mazda maintains, to 164 miles when limited to low-speed urban trips.

The SEAT Mii Electric replaced the petrol version in 2019, and with its compact size, zippy handling and, let’s face it, attractively low price, it has proved a success. With all this in mind it seems odd that the manufacturer stopped producing new models in 2021. The reason it’s on this list is that it serves as a great second car or a second-hand car option for people who live in town and want to benefit from the 2020 upgraded battery, which increased the range to 161.5 miles.

This five-door hatchback has proved consistently popular since launching more than a decade ago. The standard Acenta model is spacious and comfortable, featuring a e-pedal for convenience, an 8-inch touchscreen entertainment system with rear-view camera and 16-inch alloys. It can be fully charged in seven and a half hours, to provide a top range of 168 miles or 239 miles. The drivetrain is covered for five years and the battery up to eight years.

Fancy a break from city cars? If you need some more space for your family, you could do worse than to opt for this roomy estate, which is currently available to buy or lease for less than you might think. It is certainly cheaper to get than its rival electric estate, the stunning but pricey Porsche Taycan Cross Turismo, which retails from £80,000. The MG 5 can do zero to 60mph in 7.3 seconds, and can eat up a lot of road before needing to be recharged. It comes with some delightful onboard features to keep you occupied on long journeys, including a high definition eight-inch touchscreen. Android Auto and Apple CarPlay connectivity come as standard.

With a drive range of up to 279 miles, the Hyundai Kona Electric is one motor you can happily tour the nation’s motorways in without any concerns about when and where to recharge. A driver-friendly model, the Kona comes with a five-year and unlimited mileage warranty. The four button gears – drive, reverse, neutral and park – may take some getting used to, but it’s the future, right? The Kona can be fully charged in 11 hours at home using a 7kW charge point, making it ideal for overnight charging ahead of big journeys.

The Corsa-e already has a useful range of 209 miles, even before you take into account its performance in Eco mode. Vauxhall states this option can offer up to 40% more, giving a maximum range of 293 miles. Like other new models, charging times are falling with each iteration of the car. Currently you can charge from zero to full at a ultra-rapid public charge point in just 50 minutes, or in seven and a half hours at home.

It goes without saying that as the technology driving electric vehicles becomes more affordable and efficient, so the cost of a new EV will continue to come down. This will have a positive effect on insurance premiums, which can also be expected to fall. Here are some EVs to look out for if you’re keen to jump on board the e-wagon, but are looking for a relatively inexpensive model to insure:

How do I charge an EV?

The numbers are growing all the time. In fact, Zap-map noted 956 new charge devices were added to its database of charge points, equating to 1,419 new connectors.

In recent years all four categories of charger have grown. The increasing number of slow chargers may seem surprising. But these are being installed to on-street locations, such as within lampposts, providing an option for people who don’t have off-street parking at home.

The number of rapid and ultra-rapid charge points is also on the rise, meaning a total of 4,994 locations with 11,310 devices are now available.