What is the most used car brand in horror movies?

The cars used in horror movies have often played an integral part in assisting the villain or protecting its victims. Uswitch investigated which car brands and models are used the most in horror movies.
Share this guide

What’s the most common nightmare people have? Being chased for no clear reason by blood-sucking vampires, killer clowns, or evil, red-eyed ghosts? Or even being chased down by cars possessed by malevolent spirits, like in the movie ‘Christine’ – the 1983 film about a Plymouth Fury with a killer mind of its own.

For every movie, each vehicle’s make and model was collected using IMCD. Car usage within each movie was also collected and rated from one to five stars, depending on how much the car was used in the movie. Finally, a weighted average and percentile score for each car make and model were calculated by merging the two sets of data, to create an overall index score out of 10! This was then ranked to identify the most common cars used in horror movies.

The most popular car makes in horror movies 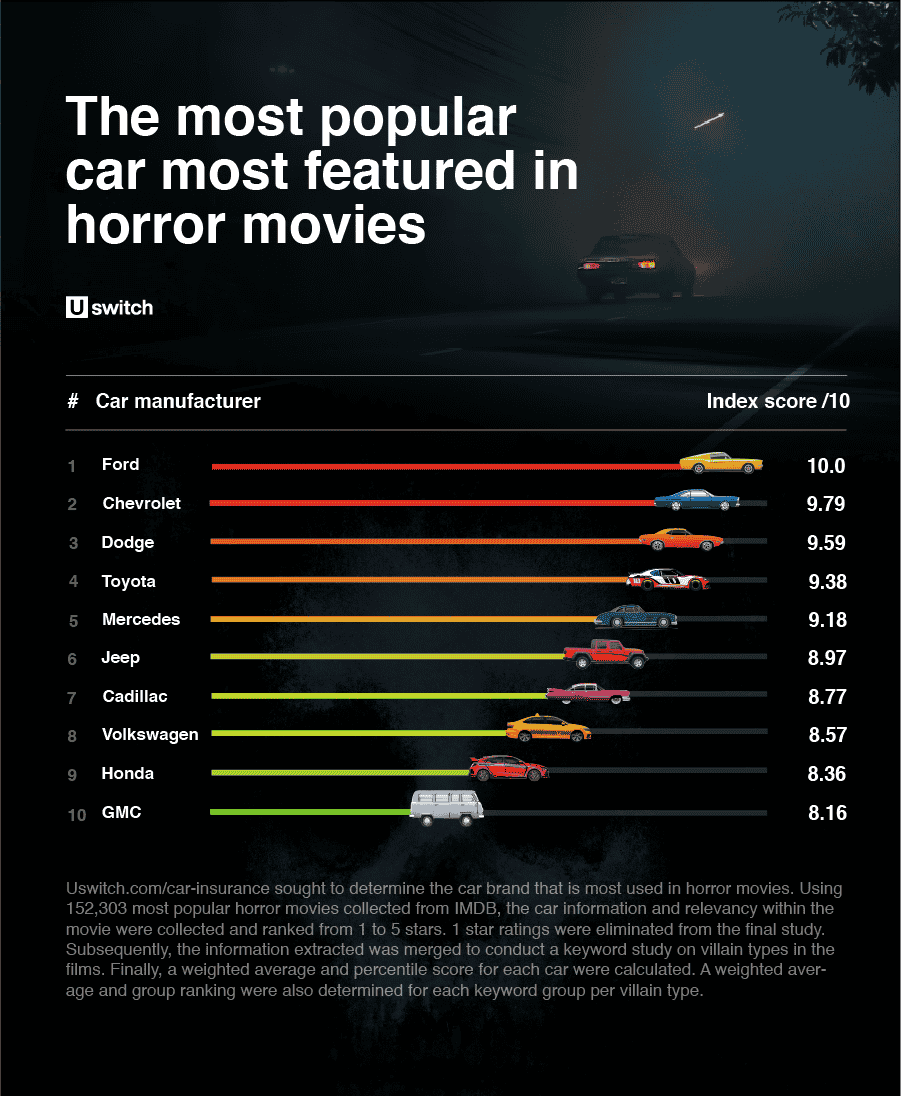 Steering straight to the top of the scoreboard is Ford, and not surprisingly as they are one of the top five car manufacturers in the US. The Ford car has appeared in movies such as ‘The Texas Chainsaw Massacre’ (1972) with their Club Wagon model, and ‘Cujo’ (1978) where a Ford Pinto Runabout plays the part of trapping a mother and her son inside during a deadly heatwave.

The next most popular make of car is Chevrolet with a nearing top score of 9.79. Commonly shortened to Chevy, the Chevrolet is a car division of the American manufacturer General Motors.

One of the scariest Chevrolets to hit our screens is the heavily rustic looking 1941 Chevrolet COE truck that appears in the frightening ‘Jeepers Creepers’ (2001). Can you imagine seeing that truck come at you in the rear-view mirror?

In third place is the Dodge with a score of 9.59 and features as the main antagonist in the 1990 classic horror ‘Wheels of Terror’ with its black Dodge Charger variant.

Fourth and fifth place goes to Toyota and Mercedes both with scores hovering above nine. Still in respectable places, Cadillac, Jeep, Volkswagen, and Honda drift in with the GMC coming in at 10th place. The 1968 GMC Suburban was used as the family car in the 2005 remake of ‘The Amityville Horror’.

Let’s take a pit-stop and explore some of the most popular car models found in our study.

The most popular car models in horror movies

The Ford Crown Victoria is the overall most popular car model, getting amongst the action in over 1,500 movies we sampled. Most notably, the Crown Victoria takes a role in ‘Children of the Corn Two: The Final’ (1993), ‘Bright’ (2017) and most recently ‘The Invisible Man’ (2020). Interestingly, this model has also been featured 635 times in video games too – the most of any other car.

In real life, the Ford Crown Victoria is used as government cars, and most notably, American police cars. There is no surprise that this car features in many horror movies, both saving and chasing victims.

Being the last man on earth probably isn’t as scary as downright depressing. How about driving around a deserted New York city in a Ford Mustang? That is exactly what Will Smith did in 2007’s ‘I am Legend’.

Coming in second place on our top 10 car model list, is the Ford Mustang. In production as an American manufactured automobile since 1964, the Mustang is Ford’s most successful car. Often referred to as the ‘Ultimate Classic Car’, the Mustang is a very recognisable car with its long hood and shark-bite grill.

In the movies, the Chevy Caprice is a vehicle that tends to crop up in many unexpected places, like shopping malls, offices, and scary places like haunted houses. There is a reason for this as the Caprice was once the most popular American car in the 1960s and early 70s. In addition, the Caprice also became used as an American police car between 2011 to 2017.

With its beastly looks and a wide-gaping grill, the Chevrolet Caprice comes in seventh place and was spotted in 606 horror movies. As a result, the model scored 9.61 out of 10 in our index.

Next in line in our top 10 model car top spot is another Chevrolet, the Chevy Impala. Similar to its older, uglier cousin, the 1941 Chevrolet COE truck, the Impala also took a starring role in the ‘Jeepers Creepers’ (2001) movie. This time playing the role of protector rather than the chaser.

Debuting in 1958, the Impala is a full-sized passenger car. It was considered a prestige vehicle in its time with its coupe and convertible range.

The Chevrolet Impala can also be found as a police car in ‘Halloween 5: The Revenge of Michael Myers’ (1989).

Probably the only car mentioned on the list so far found in wide circulation in the UK, is the Jeep Cherokee. A compact SUV and more characterised by its bulky road presence with its rugged off-road appeal.

Identified in 362 horror movies, the Jeep Cherokee comes in at number 10 with an index score of 9.33.

It’s worth mentioning at this point there are some classic horror car moments that didn’t quite make the top 10 list. The Lincoln Town Car comes in fifteenth place – a long sedan playing the main part in some terrifying scenes as a killer driverless car in ‘The Car’ (1977).

In sixteenth place is the Toyota Land Cruiser featured in ‘the Mist’ (1968). The story of a father and son being trapped in a deathly fog that sweeps their hometown in Maine, US. The Toyota is used to help them get around the town, keeping them both safe.

Other than inducing us with classic horror nostalgia, what else did we find?

Horror movie buffs and car enthusiasts, for a while, have been focusing on iconic cars played out in some of the most memorable and toe-curling horror scenes. The Volkswagen Beetle, the Plymouth Valiant, the Pontiac Firebird, and the Ford Mustang have all featured in a number of the most terrifying movies. Interestingly though, it is Ford that takes centre stage with the Crown Victoria, Econoline, Mustang and F series being the most popular models in our study.