The cheapest European capitals to hire a car

Hiring a car in Europe lets you see the sights throughout the country, but which capital city has the cheapest average price per day? Uswitch investigated.

The freedom a car can give you while on holiday in Europe is invaluable. With four wheels you can drive to all of a country’s must-see spots, so if you’re beginning to plan your next getaway you might be interested to know the cheapest European capitals to hire a car.

To find you the cheapest capitals, Uswitch collected car hire deals for each available location in every European capital city. The variables collected included:

To account for seasonal variance, it was necessary to collect hire rates for each month of the year. This reduces the likelihood of misrepresenting car hire prices with skewed samples and ensures the ranking is as definitive as possible.

The cheapest European capital cities to hire a car 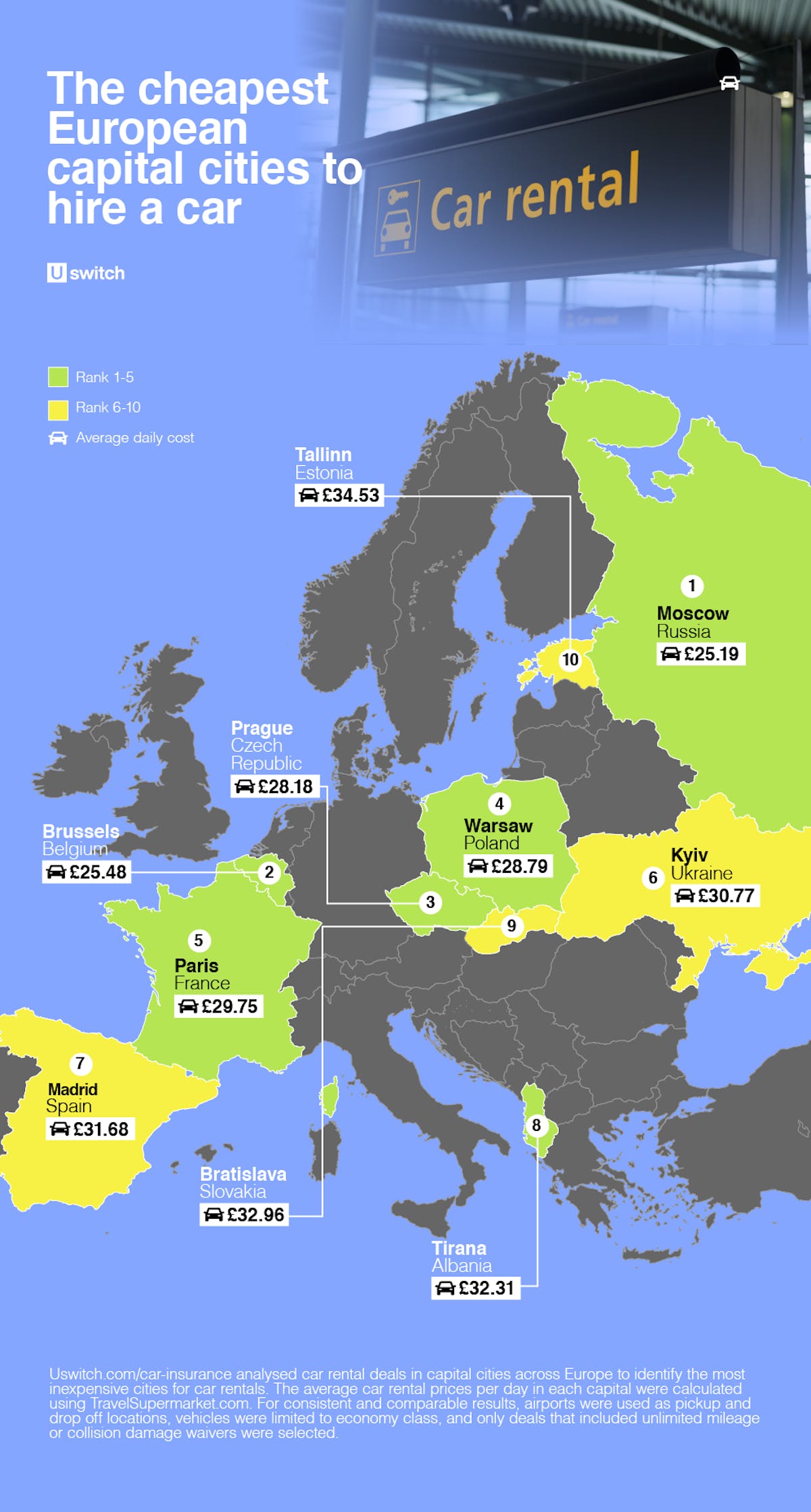 At £25.19 a day, Moscow is the cheapest capital city to hire a car in Europe. The freedom of a car means you don’t need to use public transport to see other places in Russia. You could take a short car ride out from the capital and park up at Kolomna. There you’ll be able to explore museums and historic 16th-century churches.

As the central hub of EU activity, Brussels is a very busy city. By hiring a car at just £25.48 per day you can escape the bustle of the capital and see what else Belgium has to offer. Drive just 40 miles and you’ll be at the beautiful city of Dinant, where you can visit the stunning Caves of Han and the Grotto of Dinant.

Prague is a place that should be on everyone’s bucket list. And though walking and the extensive public transport network are the preferable ways to travel for most tourists, if you’re looking to head out of the capital city you’re going to need a car. Luckily, car hire costs just £28.18 a day, making it the third most affordable capital in Europe.

Warsaw is a city with plenty of character that sees a lot of tourists throughout the year. You can hire a cheap car in the capital (priced at just £28.79 for an entire day) and travel to Polish sites outside of the city too, such as the picturesque birthplace of Chopin at the banks of Utrata River in Żelazowa Wola.

You might be surprised to see Paris coming in fifth on this list. To hire a car for an entire day you’ll pay around £29.75. Make sure you research the rules and regulations around driving in Paris before your trip, then head out of the capital to see the legendary French countryside.

The Ukranian city of Kyiv is home to incredible street art, cultural sights like Independence Square (known as Maidan Nezalezhnosti in Ukrainian), and a host of talented street musicians. Ukraine is the second-largest country in Europe, so once you’re ready to head out of the capital it is worth hiring a car for £30.77 per day to visit its other landmarks.

Madrid (£31.68), Tirana (£32.31) and Bratislava (£32.96) come in as the seventh, eighth and ninth cheapest European capitals to hire a car. While these cities are largely pedestrianised, your own vehicle will make it easier to find the otherwise hard-to-reach sights away from the capitals.

Tallinn completes our top 10 with a car hire rate of £34.53 per day. While the rules on driving here are fairly relaxed – you are even allowed to drive in a lot of the Old Town – bear in mind that parking is usually limited. Even if you do decide to use the buses, trams, trolleybuses, trains and ferries of the city, a hire car can help you see parts of Estonia other tourists might miss.

The most expensive European capital cities to hire a car 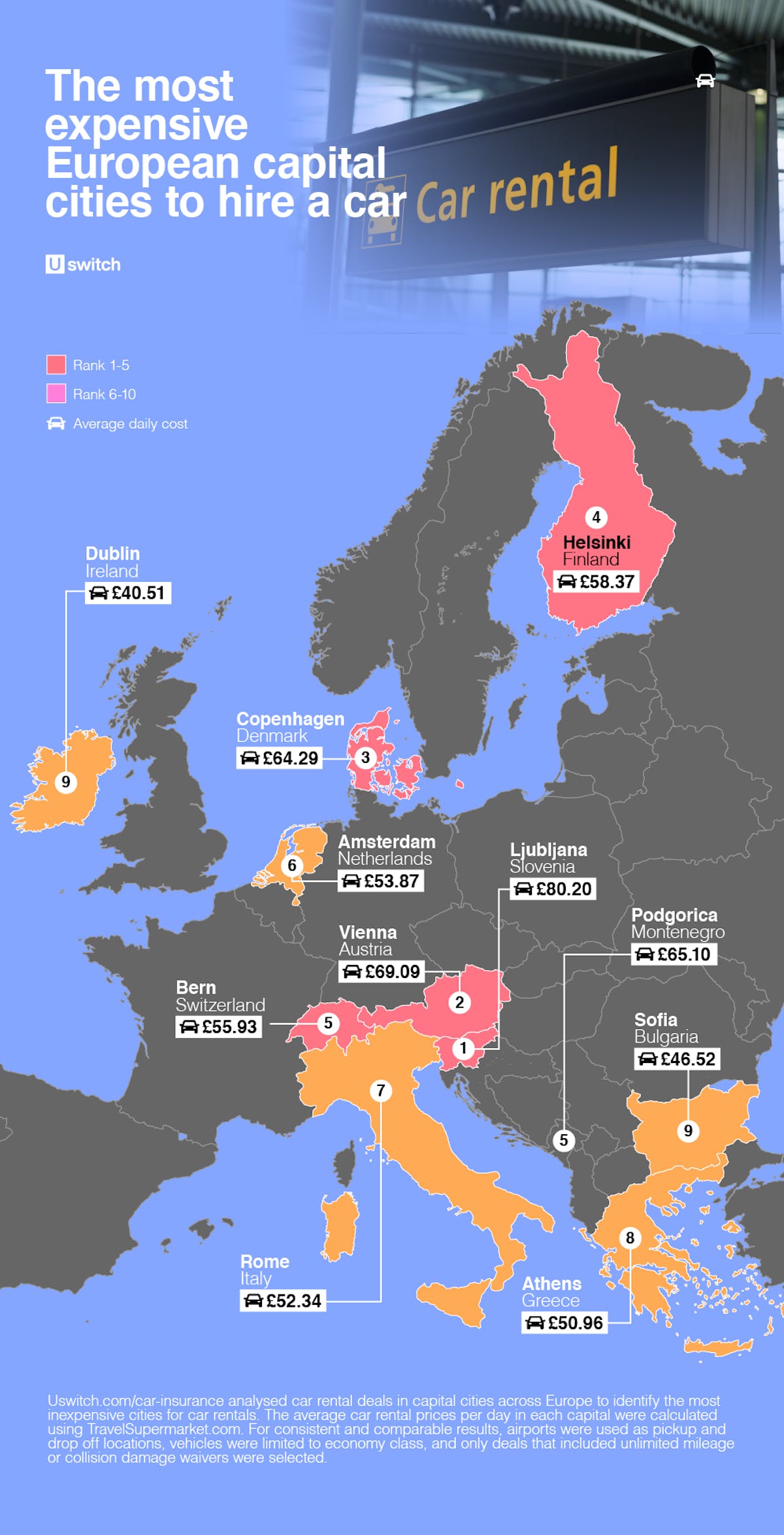 European capitals with the most expensive car hire.

Let’s take a look at the other end of the scale to see which capital cities are the most expensive to hire a car.

According to our research, the Slovenian city of Ljubljana is the most expensive of all, costing a whopping £80.20 per day. That’s over three times the rate in Moscow, which is the most affordable.

Vienna in Austria comes in at just under £70 (£69.09), which will amount to a fairly hefty bill if you want to spend your trip driving the 414 km² of the capital and its surrounding areas.

Hiring a car in Copenhagen, Helsinki and Bern are also pricey endeavours, setting you back £64.29, £58.37 and £55.93 respectively. But with some of the world’s must-see landscapes on offer, you might decide that getting out on the open road is worth it.

Tips for hiring a car abroad in Europe 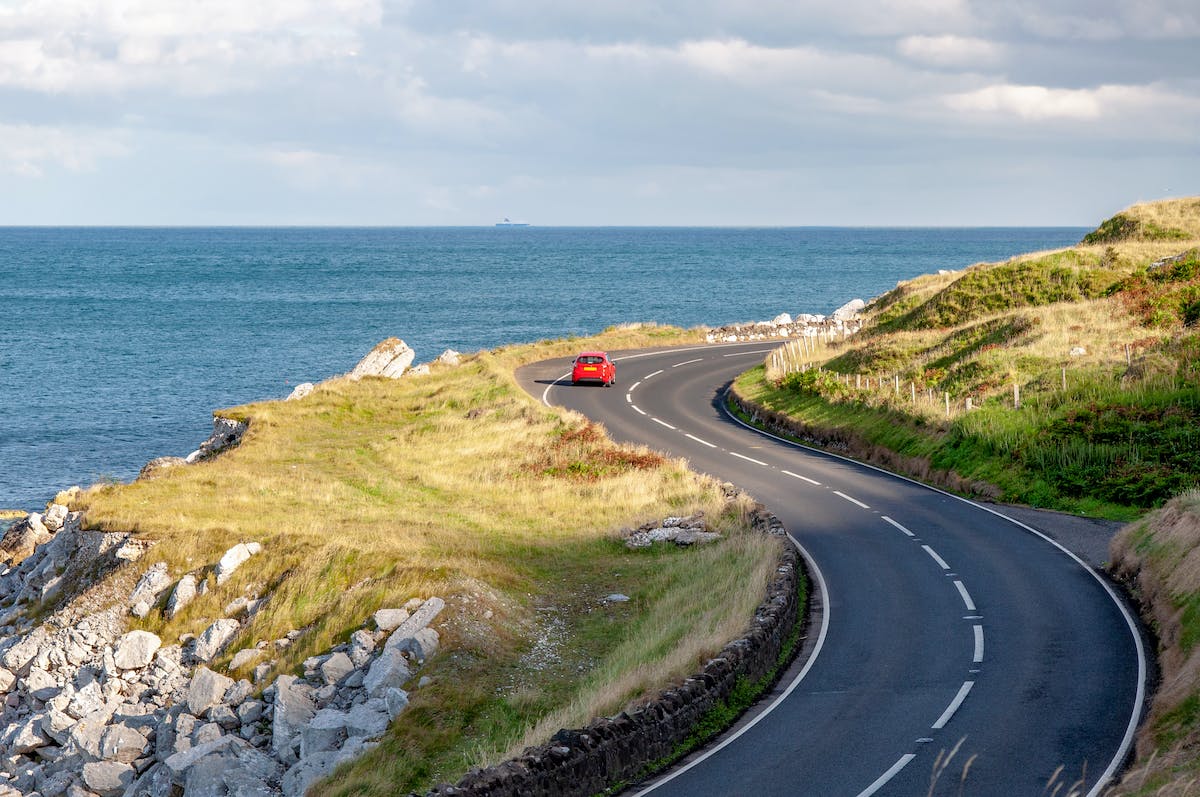 Driving on the coast.

While driving abroad can grant you independence and travel opportunities, it’s not as easy as walking into a car hire company and being handed the keys. Here are some things you should bear in mind when hiring a car abroad.

What do you need to rent a car abroad?

The type of insurance you need to drive a hired car will depend on the country itself. However, it will often be included in the overall hiring fee and outlined in the contract – you shouldn’t need to sort out your own insurance before hiring the car.

The insurance will usually cover:

Make sure you read the contract thoroughly beforehand to make sure insurance is part of the package and meets the regulations for the country. You may want to take out excess insurance in case you have an accident, so you don’t need to pay the excess charges. You can read everything you need to know about driving abroad here.

Driving abroad if you have endorsements on your licence

This information is stored electronically by the DVLA. If the car hire company requires this information, you can give them online access by using the DVLA’s Share Driving Licence service.

This service will generate a code, which the hire company can use to view the relevant parts of your driving licence. You can generate the code before you go away but if you're on an extended trip you may have to log in or call the DVLA while you’re abroad, as the code only stays active for 21 days. Alternatively, some hire companies may accept printouts of this information.

Your consumer rights when hiring a car in Europe

Although there are no particular EU laws on renting a car in Europe, you are still protected by consumer rights. These rights include the following:

To avoid any disputes opening up and ruining your trip, follow these tips for hiring a car abroad:

By following these tips and having sound knowledge of your consumer rights, you’re in a good place to have a positive experience, particularly if you opt for one of the cheapest capitals to hire a car.