With so many questions being raised around the demand, cost, and maintenance of electric vehicles, here at Uswitch, we surveyed 1,000 drivers to find out their biggest worries about buying an eco-friendly motor.
Share this guide 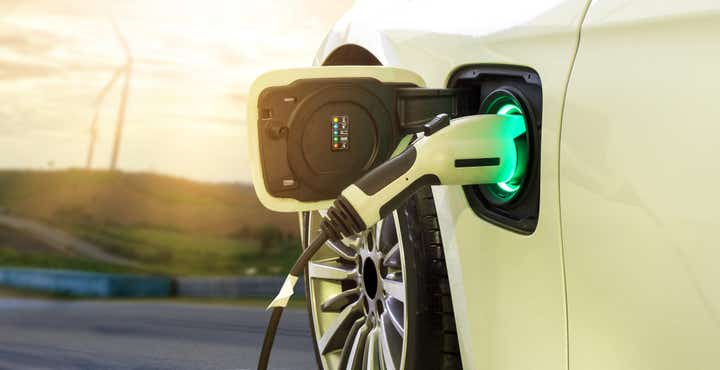 However, as electric vehicle sales rapidly increase, the race to install more charging points across the UK is on, as recent data reveals there is currently just one public charge point for every four cars.

It’s no surprise to see the number of EV charging points is the biggest worry of drivers around the UK. From our study, more than one in three drivers admitted this is the issue that concerns them the most and would put them off purchasing an electric vehicle.

Uswitch car insurance expert, Ben Smithson, said: “While there’s still a long way to go, thankfully the UK's charging infrastructure is improving all the time, with the number of public charge points increasing from around 1,500 in 2011 to more than 36,000 in over 13,000 locations in January 2021.

“There are now also more electric vehicle charging points than fuel stations installed around the UK, which is a positive sign for those thinking of buying an EV and evidence of the continued investment  in this technology.”

The cost of an electric or hybrid car

Money is another issue on motorists’ minds, with 30% anxious about the cost of an electric car. 41.45% of those over the age of 45 admitted they couldn’t afford to purchase an electric or hybrid car, alongside 37.5% of female drivers who raised more concerned about the high price points than men (28.08%).

Some electric cars are very expensive, for example, the Tesla Model 3, which costs around £38,900. However, after the Government's £3,500 plug-in car grant, you can get a good deal if you do some research.

After looking at the most popular new models, it seems a Smart car is the cheapest option. The car brand now only sells electric cars, and the EQ Fortwo is the smallest and cheapest of them, coming in at around £16,850.

Some car manufacturers such as Renault also offer electric car battery leasing, which gives you the option to hire batteries instead of buying them with your car. As a result, the purchase price is significantly reduced, however, a monthly battery leasing cost will be incurred. Just like buying a car on finance, this offer is designed to make it more affordable for those buying a new electric car.

Alongside the cost of the vehicle, 25.3% said they fear having a home charging point installed is too expensive, with an additional 20.9% thinking they would rack up a high electricity bill if they did have one installed.

Homeowners are the most worried about their bills surging (30.9%) compared to 22.2% of those living in rented accommodation.

Residents in Brighton are also the most bothered about the cost of home charging (33.2%), along with those in Edinburgh (30.77%) who also stated this was a huge turn off.

If this is also on your list of concerns, there is funding available from Government schemes to help manage the cost of installation. The Electric Vehicle Homecharge Scheme (EVHS) provides grant funding of up to £350 towards the cost of installing electric vehicle charge points at domestic properties across the UK.

Our survey revealed almost a third (29.7%) of drivers think their car’s battery will go flat while they’re out on the road, which we agree would be a nightmare.

Of all the age groups we surveyed, drivers over 55 suffer the highest level of range anxiety (41.5%) in comparison to those aged between 17-22 where just 13.1% flagged this as a problem.

“Most people have enough experience of using petrol stations that they don’t worry about running out of petrol.  However, with many drivers not yet experiencing using a public EV charger before, it’s an unknown factor – and one that can influence the decision whether to get an electric car or not.

“However, there are many things you can do to decrease range anxiety, including planning ahead for your journey, calculating your estimated mileage, and using a sat nav to locate nearby charging stations.”

The fourth biggest problem drivers foresee is the length of time it takes to charge an electric car. Over a quarter said this was one of the things putting them off making the electric switch.

Drivers in Glasgow see this as the biggest issue, as 45.6% think it takes too long to charge an electric car, and they don’t want the hassle of waiting.

When it comes to the simple things, more than one in ten drivers worry they’d forget to charge their car and be left in a sticky situation when they need to head out.

Women are more likely to forget to charge their car than men, with one in eight admitting this is amongst their biggest fears. Younger drivers also admit they’re more forgetful, with 35.7% of those aged between 22 and 35 raising a red flag.

While repairs and maintenance didn’t crop up as the biggest worry overall, over a quarter of drivers foresee they’d have problems if they bought an electric car.

One in six say the cost of repairs on electric cars is too expensive, which is one of the factors preventing them from going green.

However, repairing an electric car is often much less hassle in comparison to a petrol or diesel motor, which contains hundreds of working parts that need replacing over time.

The engine, radiator, pistons, spark plugs, fuel pumps, cooling systems, exhaust system and timing belt are some of the most common parts that often need repairing. Meanwhile, an electric car has a lot less to wear out, so while the parts may be more expensive, you hopefully won’t need to have as many repairs over time.

In addition, research by automotive data experts KeeResources revealed that an electric car costs at least 30% less to service and maintain than a regular vehicle, depending on the model you opt for and how you drive it.

However, alongside the cost of repairs, one in seven drivers don’t think there are enough qualified mechanics currently equipped to deal with electric repairs.

This is a big problem for almost a third of drivers in Norwich, whereby 28.9% said it’s a discouraging factor.

Recent data from the Institute of the Motor Industry (IMI) revealed there are currently between 13,000 and 20,000 qualified technicians working on 380,000 plug-in vehicles across the UK, which equates to around one mechanic per 20 electric vehicles.

The industry body is concerned that as EV and PHEV adoption increases, the number of vehicles will further outweigh the number of mechanics who can work on them, as Covid-19 has set training back in 2020, with the number of certificates down 85 per cent on the same period last year.

To help get more mechanics fully trained, the IMI is now calling for support and incentives to be given to automotive firms to increase the number of technicians being trained to work on EVs, as well as improve and implement recruitment and apprenticeship schemes.

The cost of car insurance

Car insurance is always an issue to consider, especially younger drivers insurance, which is often pay higher premiums. From our survey almost one in 10 drivers said they think electric car premiums would be more expensive, with one in eight of those aged 17-24 admitting this would potentially stop them making a purchase.

While there are several things that affect the cost of your car insurance, will an electric or hybrid model be more expensive?

While it’s previously been difficult for young drivers to secure low-cost car insurance, as electric cars sales are rising, premiums are starting to fall.

“In order to calculate your premiums, when considering the insurance group of your vehicle, insurers assess a number of factors including the value of the vehicle, the ease of finding a professional qualified to repair the model and the cost and availability of parts.

“While some electric vehicles are more expensive to insure due to the cars' higher purchase price, the need for specialist equipment and repairs, and a lack of data on driver behaviour, as more drivers make the switch to electric, it is predicted that the insurance market will undergo a degree of correction.

“As a result, premiums will eventually fall, making EVs and Hybrids more accessible to a range of drivers.”

Who has the most EV worries?

From our research, we found that women had more anxiety about purchasing an electric car than men. Overall, one in six male respondents said they had no worries about making the switch, in comparison to just one in ten women.

The high cost of an electric vehicle was the biggest concern for female drivers, with almost 40% choosing this option. This was followed by range anxiety, with 36.4% fretting their car would run out of battery whilst on the road.

On the other hand, a third of male drivers revealed they’re most alarmed about the lack of accessible charging points in their local area, making this their biggest fear.

When it comes to the age of motorists, young drivers aged between 17 to 24 have the most worries, with just 8.5% stating that there’s nothing that deters them.

In comparison, drivers over the age of 55 are the most excited about making the electric switch, with one in five raising no red flags.

Taking a closer look around the UK, we also looked at which cities are the most and least likely to purchase an EV.

Drivers in Sheffield and Plymouth came out on top, with a quarter of those we surveyed giving electric vehicles the thumbs up, saying there’s nothing that would prevent them from swapping their petrol or diesel car for an EV or hybrid.

However, not all cities are as eager to make the move, with just 8.4% of drivers in Nottingham and 8.8% in Bristol ready to go green.

If you’re looking for more information, take a look at our guide to electric car insurance, or check out the Most Googled EV Questions of 2020, where we answer Britain’s most burning questions.