10 common driving habits that could be damaging your relationship

Although your driving habits may seem completely harmless, our latest research reveals the common behaviours that could be convincing your other half to make a swift u-turn and hit the road.
Share this guide 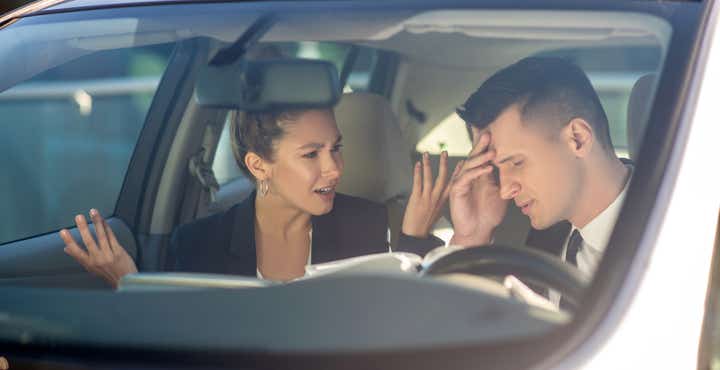 Man and woman having argument in car

Unsurprisingly, a whopping 60% of Brits admit that having bad driving habits are considered a major turn-off, making them feel less attracted to their partner or love interest.

Having discovered the importance of appropriate road etiquette when it comes to dating, Uswitch have found out what exactly could be leading you to deter your partner. From road rage and tailgating to using your phone and running red lights, we surveyed 1,000 Brits to find out what to avoid doing in order to keep your relationship on the road to success.

We also asked the UK’s leading relationship expert, James Preece, to highlight what these habits reveal about your personality and how they could potentially be negatively perceived by your partner or date.

Man and woman having argument in car

Using your mobile phone behind the wheel is considered the biggest turn off by Brits. Not only is this illegal, it’s also the biggest no-no for the majority of men and women.

Overall, 49% said they would find their partner less attractive if they sent a text or answered a phone call when they should be keeping their eyes on the road.

Women found this to be worse than men, with one in three stating they’d consider putting the brakes on their relationship, in comparison to around a quarter of men.

If you’re guilty of this, the easiest way to avoid becoming distracted by your mobile phone in the car is to simply switch it off or put it on flight-safe mode before starting your car. This will deter you from checking your phone during your journey.

“It’s not surprising to see that illegal driving practices have the potential to ruin a relationship. Drivers who are caught using a mobile phone behind the wheel will face a fine from £200 to £2,000 and six penalty points. For drivers who have held their license for less than two years, this means they will lose their licence.

Alongside this, more experienced motorists can lose their licence if they receive 12 points within a three-year period, so it doesn’t stop them losing their license either.”

Speeding also appeared on the list of offences, with one in five Brits admitting they don’t want their partner to put their safety at risk. Following using your mobile phone behind the wheel, participants stated that driving through a red light (22%) and not using indicators to signal to other road users (20%) were also amongst the top biggest turn-offs on the road.

Driving can be stressful for even the calmest personalities, especially with frustrating traffic queues and road works. However, keeping a cool head might help keep your relationship on track.

As the second biggest turn-off, tailgating has the potential to end a relationship, according to a third of women and one in five men. Tailgating involves driving too close to the vehicle in-front, and often occurs when a driver is frustrated.

Alongside tailgating, road rage and swearing could also send your partner packing, with a quarter of women admitting they see this as a red flag in their relationship.

Other uncourteous behaviours topping the list include not giving way to pedestrians or cyclists trying to cross the road. Interestingly, women found this to be more off-putting than men, as one in three agreed it represents bad personality traits in comparison to just one in five men.

“Your driving habits can reveal a lot about your personality. Tailgating, road rage and speeding can all be signs of narcissism and a feeling that you are better than everyone else. Therefore, you can get irritated when people get in your way.

“The biggest red flag of all these is road rage which usually stems from a deeper emotional problem. Perhaps you are dealing with a breakup, a heavy workload or some other issue that is causing you stress. Swearing is also a negative trait as it shows aggression.

“My advice would be to play some calming, relaxing music that brings your blood pressure down. Classical music can help reset your mood and instantly make you feel happier, so ensure you always have a CD or radio channel ready to go.”

For fans of the MTV reality show ‘Pimp My Ride’, the thought of owning your own kitted out car is probably a dream true. However, when it comes to attracting a partner, our research reveals it’s better to keep those modifications low key.

On average, one in six admitted they find extravagant additions such as spoilers, neon lights, and loud exhaust systems extremely unattractive and tacky.

One in five women are turned off by expensive modifications, however surprisingly, just one in 10 men said they were concerned about accessories such as bumper stickers and car eyelashes.

Playing loud music with the windows down is also a massive no-go for a huge proportion of partners. 20% of women revealed this was one of their biggest turn-offs, feeling embarrassed to be a passenger. Overall, men aren’t as bothered by this, as only one in nine raised it as a potential problem.

But what does this say about someone’s personality?

According to James Preece, loud music and expensive modifications can be a sign of insecurity. He said:

“Sometimes, it may be a case that someone feels the need to show off with loud music, speakers or upgrades to make their mark. This can be a sign that they feel inadequate and lack confidence. They use their car to mask their insecurities.”

Alongside this, insurance for modified cars can be more expensive. Car Insurance expert Ben Smithson said:

“Modified cars often incur larger insurance premiums due to their increase in value and the stereotypical "boy racer" attitude often linked to them.

“Obviously placing everyone in this category is unfair, and to help tackle this problem there are providers that specialise in modified vehicles to help save driver’s money.

“They usually offer extra options to cover such modifications which normal policies may not. These can include styling, audio, or performance modifications, all of which must be declared during the quote process.”

Is your car filled with fast-food wrappers and smelly gym clothes? If so, you may want to give it a clear out if you’re looking to impress your partner.

Having a dirty car exterior is unappealing to over a fifth of Brits, while leaving empty junk food wrappers inside is perceived as being equally as bad.

If you are guilty of leaving junk in your trunk, it could be a physical expression of your mental state according to our dating expert. He said:

“No matter what you drive, the way you maintain your car, inside and out, gives people some insight into your personality.

“People make judgements quickly, so a dirty car could be an indication that the owner is unhealthy or lazy.”

However, if you guzzle lots of water in the car, these empty bottles could have the opposite effect when it comes to attraction. Psychologist Dr. Tina Tessina suggests that drinking water in the car is a sign that you’re efficient. Why? Because even though you’re always on the go, you still stay on top of important things – like keeping yourself hydrated.

If you’re worried about your driving behaviour, it’s important to know which common habits are illegal. Take a look at our guide on six driving habits that could land you a hefty fine to find out more.