The UK's most endangered cars & bikes

As technology improves and prices drop, it’s becoming increasingly easy to pick up a new car these days, meaning that seeing an ‘old banger’ on the roads is less and less common.
Share this guide

The UK's most endangered cars & bikes

This means that some classic (and not so classic) cars and motorbikes are in danger of becoming extinct in the next couple of years.

We’ve delved into Department for Transport and DVLA data to find out which vehicles have seen their numbers drop the most in the last 25 years. 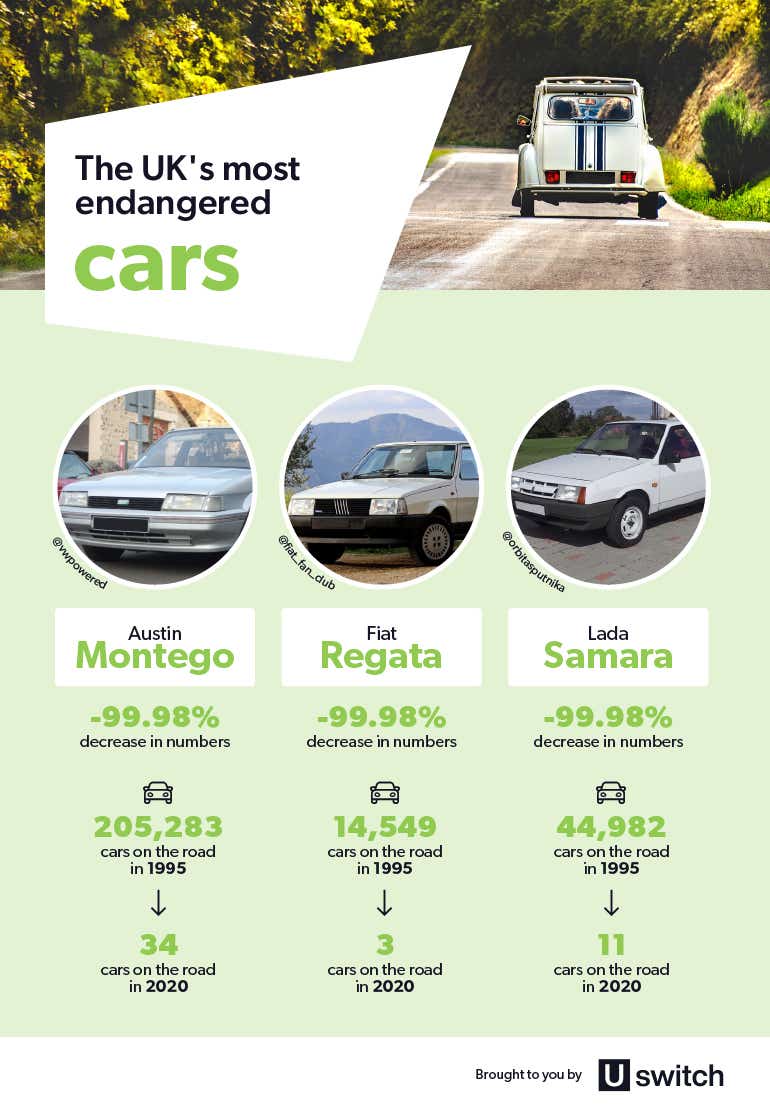 Three vehicles shared the top spot – seeing their numbers drop by 99.98% in the last decade – including the Austin Montego, which was a regular feature on our roads and driveways from the 80s and into the 90s, with over 200,000 models registered in 1995. Flash forward to 2020 though and there were just 34 remaining, meaning that 99.98% of Montegos have vanished from our roads in the last quarter of a century! One of the big reasons for this is that pre-1989 models can only run on leaded petrol, which stopped being sold in the UK in 1999.

Similarly to the Montego, the Fiat Regata is another small family car from the 80s. While the Regata wasn’t quite as prevalent on our roads back in 1995, its numbers have dropped at a similar rate, with just three surviving today, from just under 15,000 25 years ago.

A car from a brand which you’re not likely to have seen on the streets for a while, the Lada Samara. There were around 45,000 of these Soviet-produced family cars on the market in 1995, but just 11 survive to this day. While it hasn’t been sold on these shores since 1997, the Samara actually survived in its native Russia until as recently as 2013.

The makes which have all but disappeared from our streets

Zastava is one of many state-owned Central and Eastern European brands that have all but disappeared over the past 25 years. The Serbian manufacturer had over 27,000 cars in Great Britain in 1995, but since they were acquired by Fiat in 2008, that number has fallen by 99.94% to just 17.

Perhaps the best-known of the Eastern European manufactured brands that populated our streets back in the day is Lada, with over 100,000 of the vehicles in Britain in 1995. The brand pulled out of most overseas markets in the post-Soviet era, meaning that there are just 163 left today, although they’re still going strong in Russia (albeit under the control of Renault).

When Mitsubishi expanded its operations to the UK in 1974, it did so under the name of the Colt Car Company for the first decade of its existence, before being rebranded to the name that we know today. In 1995, over 20,000 of these old ‘Colt’ branded vehicles were still on the roads, but today that number has dropped to just 46.

Hondas dominate the most endangered scooters and motorbikes 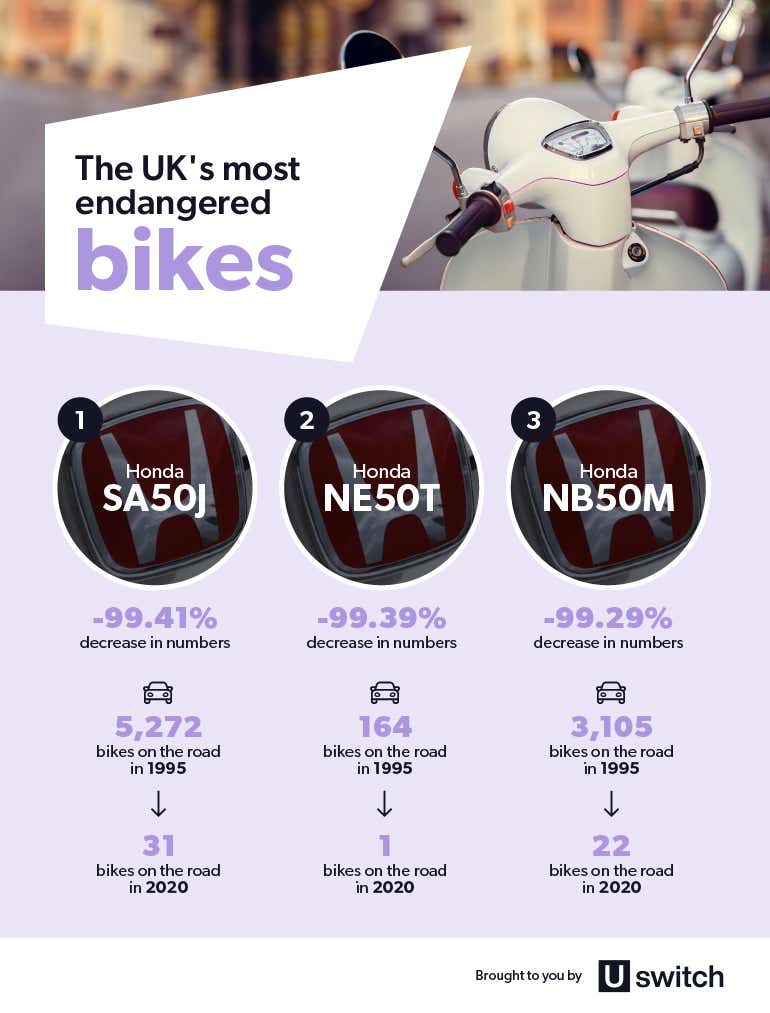 The list of motorcycles that have seen the biggest decrease in numbers over the last 25 years is a bit more obscure than that of the cars, with the Honda SA50J taking the top spot, having seen its numbers dwindle by 99.41%. There are now just 31 of these left in Great Britain, down from over 5,000 in 1995.

Second place goes to a very obscure model, given that there were only 164 Honda NE50Ts on the roads in 1995. What’s most notable here is that there is just one sole survivor today, meaning that their numbers have dropped by 99.39% in the last two and a half decades.

Take a look at the best and cheapest motorbike insurance deals here.

All figures were sourced from Department for Transport and Driver and Vehicle Licensing Agency data (Licensed vehicles by make and generic model name: Great Britain and United Kingdom).

We took the number of licensed vehicles for each model from Q3 2020 and Q4 1995 and calculated the difference between the two.

Commercial vehicles were omitted, as were results that seemed to be errors in the dataset (for example car brands being listed as motorcycles). When looking at brands as a whole, we also included figures for vehicles where only the brand was known, not the specific model.

Note that data for vehicles registered in Northern Ireland was unavailable for 1995, so the figures refer only to England, Scotland and Wales.