As automotive technology continues to advance in surprising and innovative ways, one question remains: where are our flying cars? With some of the biggest names in motor manufacturing and tech racing to be the first to turn drivers into pilots, we decided to take a look at how close we are to getting airborne and what’s being done to prepare for this new generation of elevated travel.
Share this guide 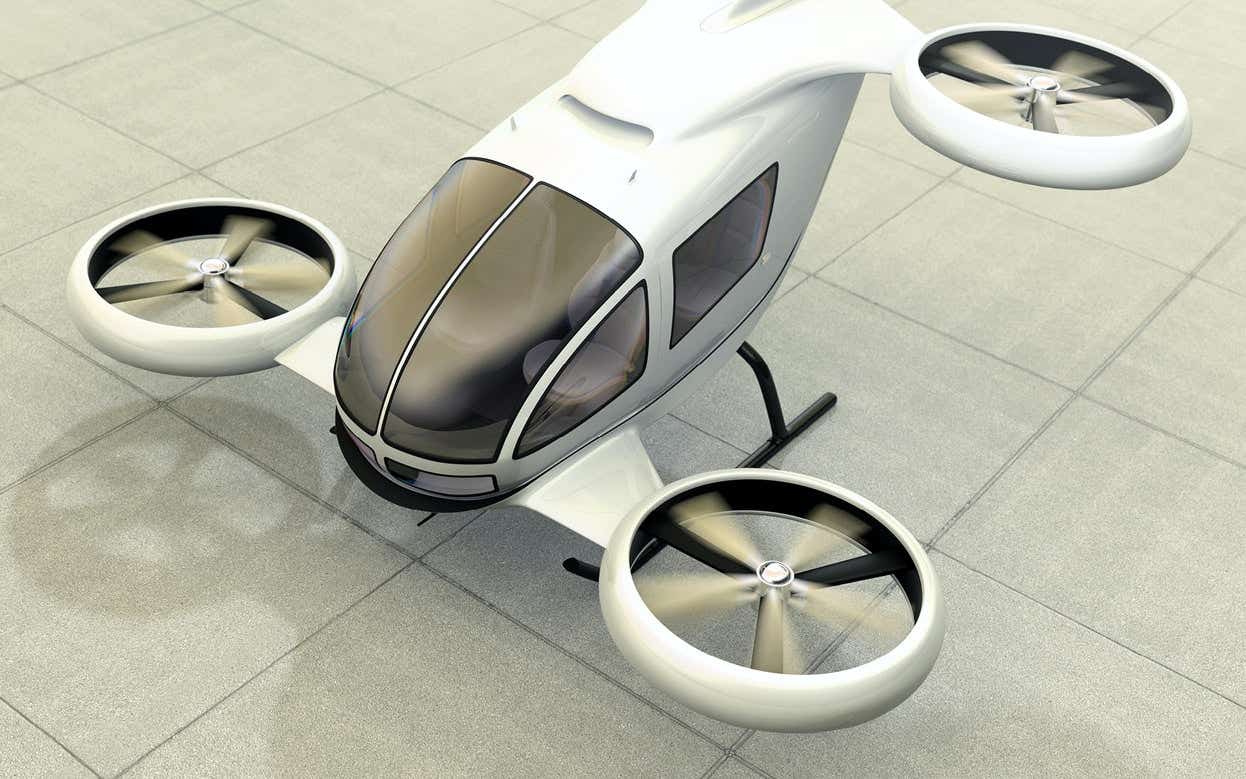 As you can see, from flying cars and aerial taxis, to larger commercial eVTOL (Electric Vertical Take-off & Landing) vehicles, there’s plenty going on behind the scenes. Read on for five key insights into what the next stages of this exciting technology will look like.

Although some may not look like the technology from sci-fi, shaped more like large drones than a hovering hatchback – there are still plenty that have the wheels and wings combo to satisfy purists, and many have even revealed estimated price points for when they’re available.

Here are five examples of models in various stages of the development cycle, their key specs, and their price tag to show you what to expect in tomorrow’s showrooms: 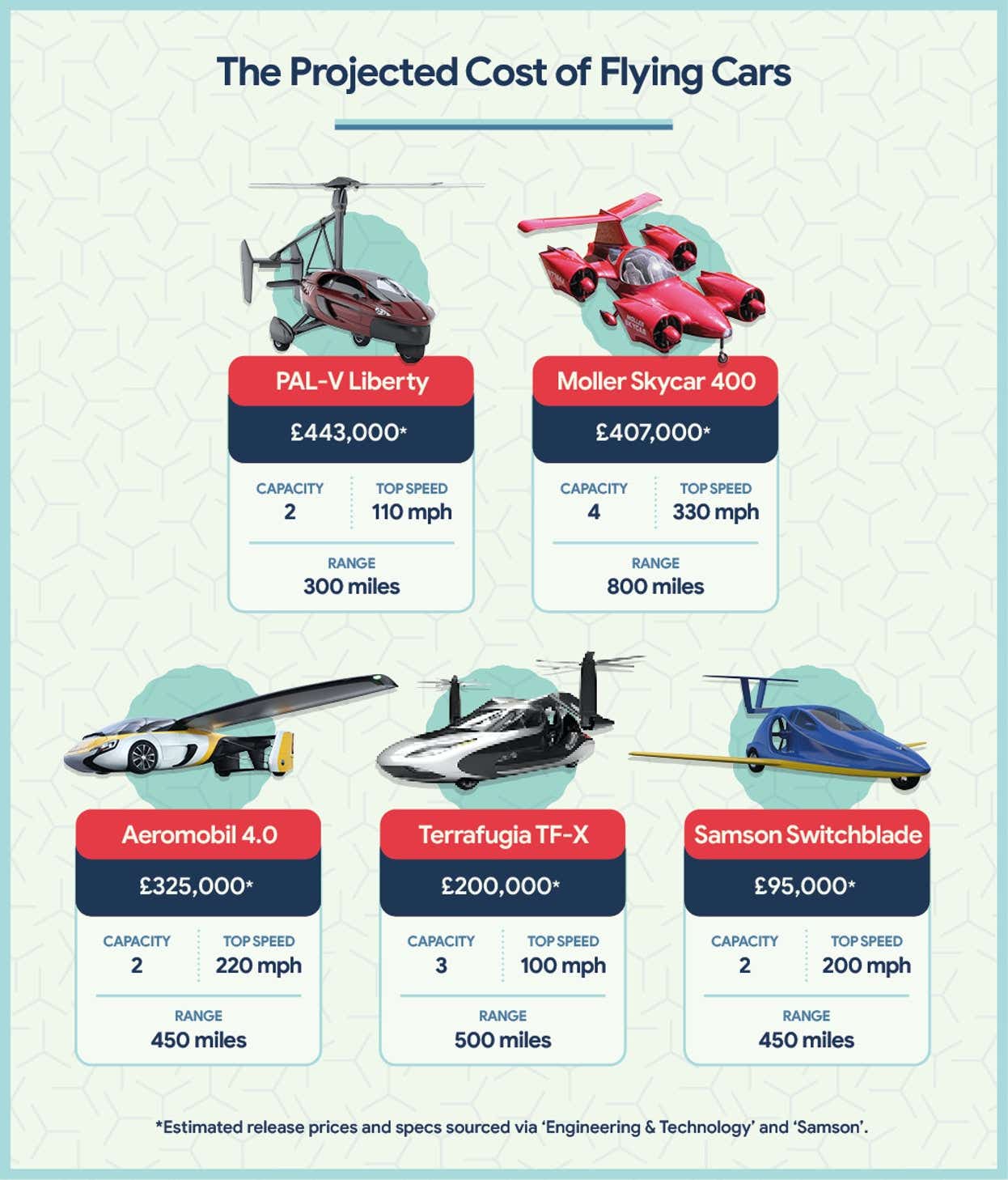 While the prices may be a bit lower than you’d expect, especially the Samson Switchblade which comes in much cheaper than many ground-based sports models, only time will tell what the price of the car insurance on them will be.

2. Over 1/3 of flying car projects are already being flight-tested

When you see news articles about flying cars, they always seem to be just out of reach. That’s not to say that progress isn’t being made on them, with 38% of active flying car and eVTOL projects currently in the flight-testing stage. 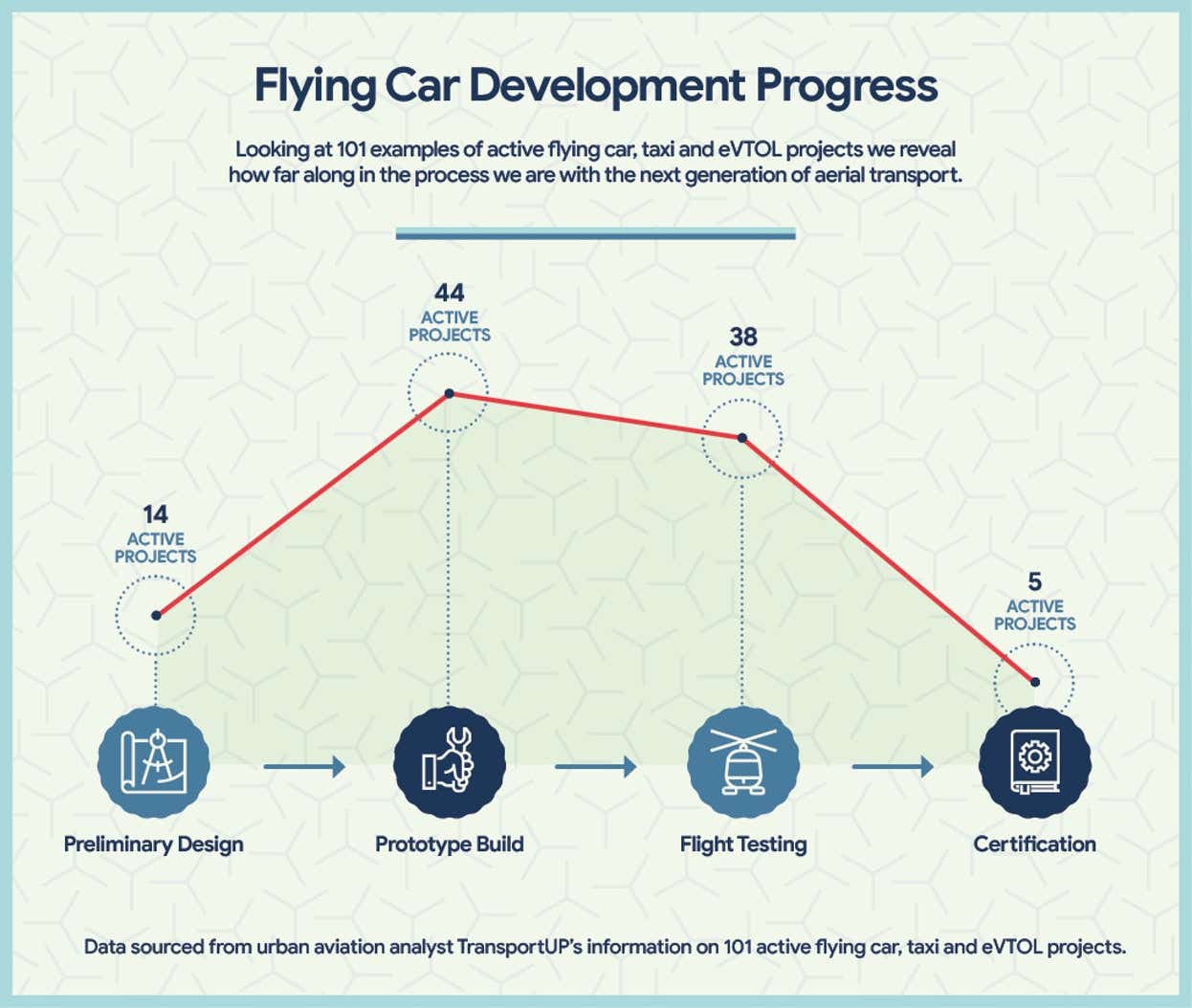 Of the 101 flying vehicles included in our research, five have reached the certification stage – waiting to see whether they’ll be permitted for personal and commercial use. Eager to join these lesser-known frontrunners, Uber is planning to invest £1.2 billion in the sector by 2025 and commence flight testing for their aerial taxi as soon as possible to meet their 2023 release target.

The pilot cities for this new, exciting method of transport will be Melbourne, Dallas and Los Angeles. While it seems very futuristic, this type of trial isn’t unprecedented with a flying taxi service having been tested in Dubai in 2017.

3. From taxis to deliveries, what will the main use for flying cars be?

According to a 2020 report from Ehang, a world-leader in autonomous aerial vehicles (AAVs) the most promising uses for the technology are: 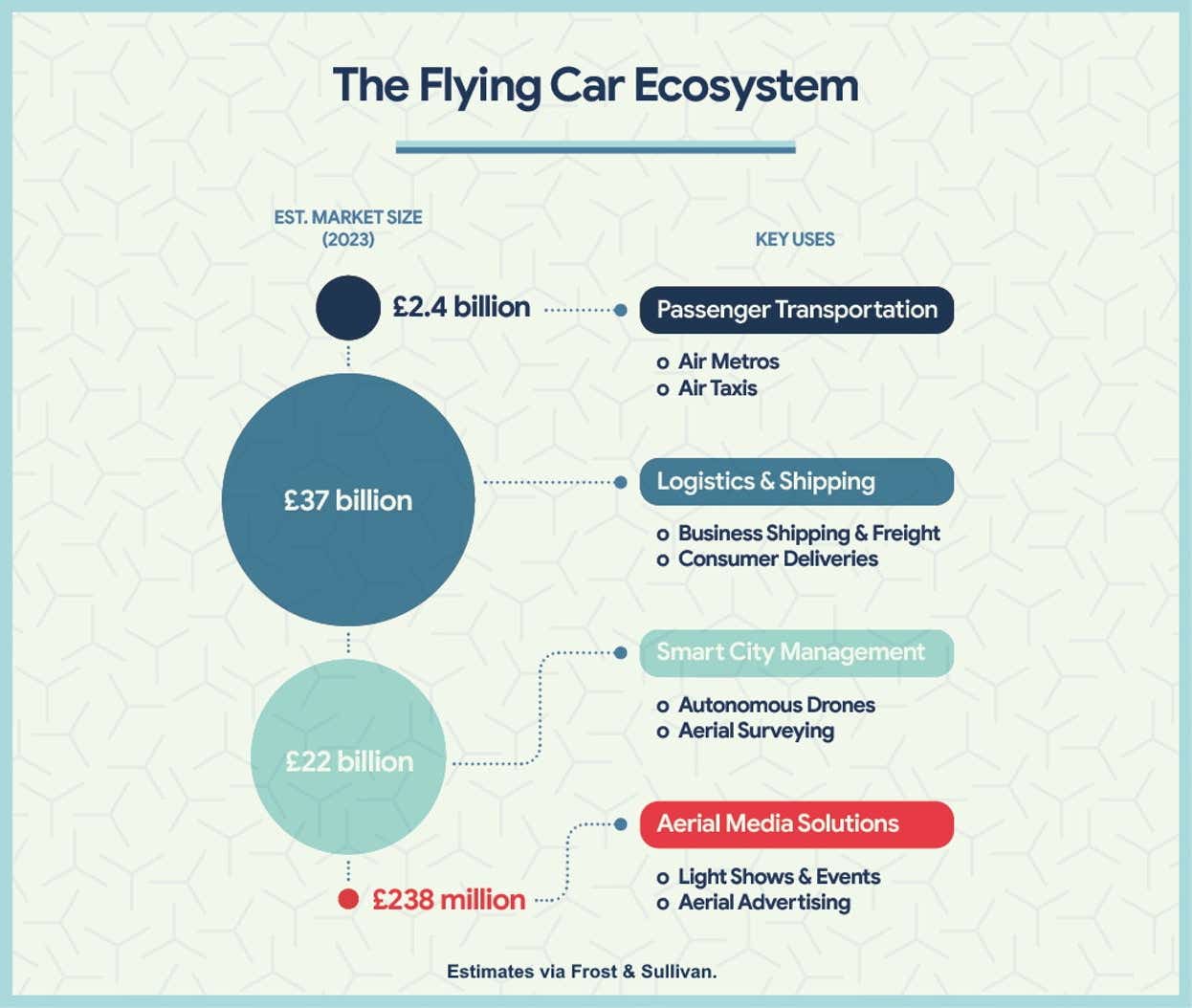 NASA’s Advanced Air Mobility department also sees the potential of these use cases, with a promotional drive planned for 2022 to educate the public about the benefits of urban aerial vehicles.

With passenger transportation being one of the most talked use cases, it’s worth knowing how much a journey will set you back. A ride in Uber’s flying taxi – supposedly arriving as soon as 2023 – will reportedly cost £4.24 per mile, according to their Head of Elevate Eric Allison. That would make it a mere 64p per mile more to be flown to your destination than be driven by an average London taxi.

As to where we’re at in terms of legislation, the European Flying Car Association had this to say about which countries are leading the way:

“Flying car regulations in the UK, United States US, Europe, Israel and UAE Dubai seem to be in the most advanced stage. The governments in these countries have taken positive action towards the development of legal frameworks for drones and now subsequently they are working on regulations for flying cars.”

Flight tests have been carried out on eVTOLs for these uses since the mid-2010s and in the coming years we’re likely to see what official frameworks for commercial flying vehicles will look like across the world.

While many people still don’t take the concept of flying cars seriously, they may want to look at the exponential growth projected for this technology over the coming years. 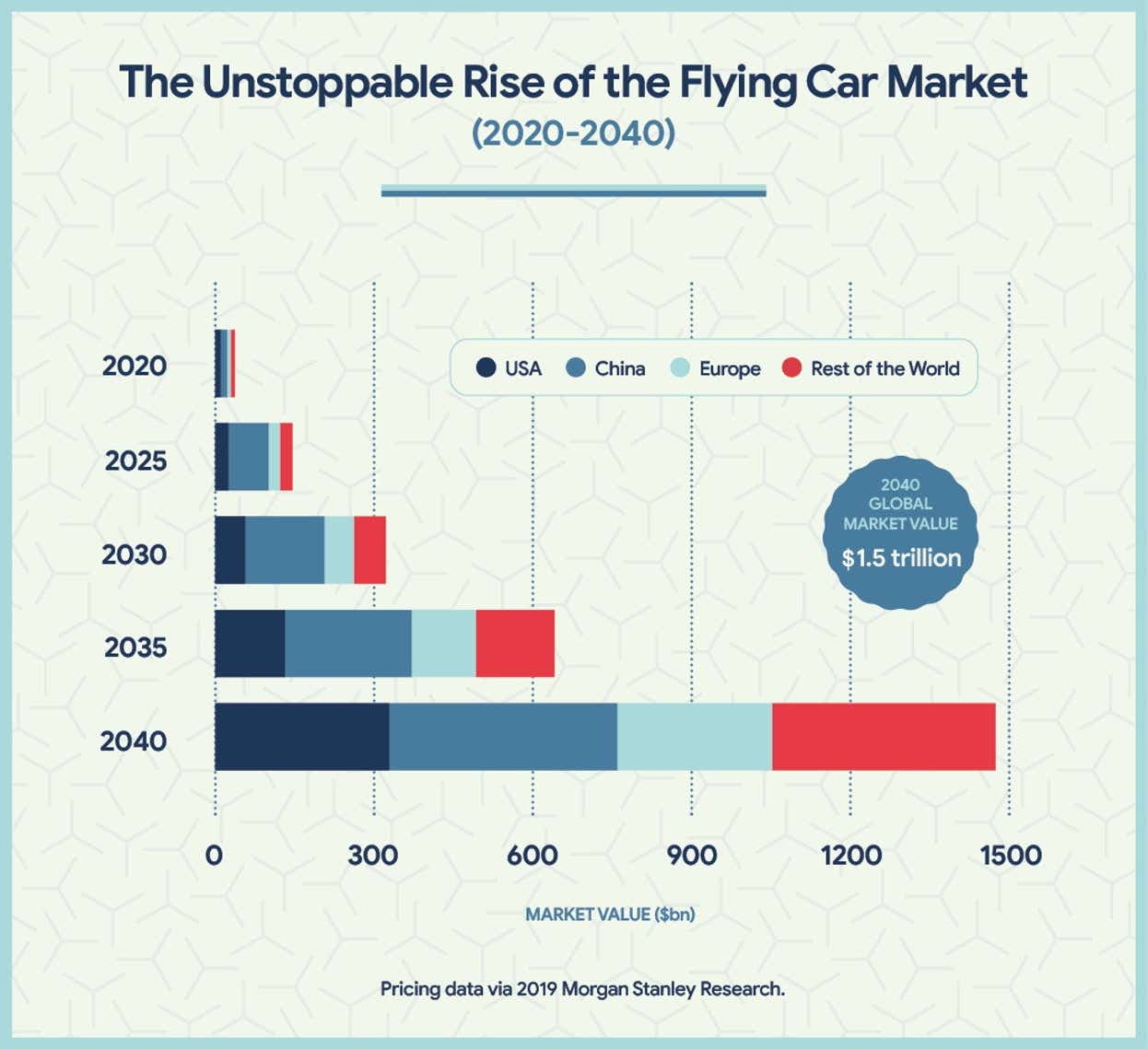 Household names like Uber, Hyundai, Audi, Toyota as well as British automotive icons like Rolls-Royce and Aston Martin are amongst those racing to be the first to get commercially viable flying cars into the market.

Thanks to the huge success of consumer and commercial drones, there is a huge appetite for aerial vehicles that can get people from A to B, deliver everything from the weekly shop to takeaways, and also help to make cities a greener place by easing congestion.

5. While people like the idea of flying cars, they are more cautious of the reality

A 2019 Deloitte study, which asked a global focus group of 10,000 their views on flying cars, found that 80% had fears about their safety. However, 50% of people in the same study viewed them as a viable solution to congestion in cities.

It’s up to manufacturers and regulators to educate the public on the benefits of aerial urban vehicles from faster transit to precise logistics – not to mention the environmental benefits due to the vast majority of eVTOL projects being run on electric motors.

As the technology and battery capacity improves, alongside successful trials that open new avenues for how we move about our cities, it’s a safe bet that opinions will start to shift.

Want more insights into the technology driving the next generation of vehicles, why not look at our study into Connected Cars and cybersecurity.

Make sure you’re getting the cover you need, get a car insurance quote with us today.