From waiting in queues, to shelling out on petrol, or being squashed into a cramped train carriage first thing in the morning, commuting isn’t exactly fun.
Share this guide

There are many factors that can make your daily commute a breeze or a living nightmare, but where in the world is it the worst? And how does the picture vary around the UK?

To find out, the car insurance experts at Uswitch have analysed a range of countries, towns and cities considering the average commute time and the cost of getting into work. They also explored which places have the greenest commutes, based on  the number of electric vehicles and charging points on the roads.

The best countries for commuting 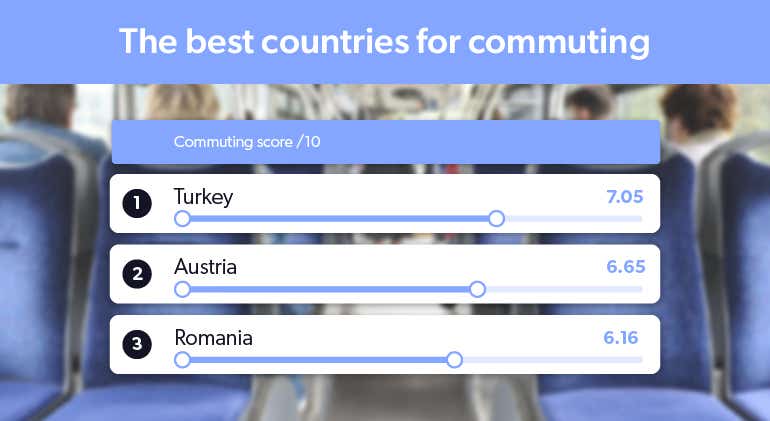 Taking top spot was Turkey, largely due to the affordability of commuting in the country. Not only was Turkey the cheapest nation when it came to fuel, with an average price of just ₺7.92 (£0.66) per litre, it was also in the top five cheapest countries for public transport too. But it wasn’t just affordability that Turkey excelled in, as commuters in the country are also amongst the greenest, with average emissions of 4.4 tonnes per person.

The second-placed country when it comes to global commutes is Austria, which primarily scored highly when it came to environmental factors. They were  also among the countries that had the lowest costs when it comes to the cost of a public transport pass, with an average monthly cost of €49 (£42).

In third place is Romania, which was the cheapest nation when it came to the cost of a monthly public transport pass, where you’ll pay an average of 79.34 leu, which is about £14. Romania also had low emissions, at 3.4 tonnes per capita.

The worst countries for commuting

Ireland was the worst country for commuters, notably having the highest cost when it comes to a public transport pass, which averaged at an incredible £85.71 a month. In fact, Ireland scored pretty poorly on every factor that we looked at, other than its CO2 emissions.

Ireland’s neighbours in the United Kingdom came out as the second-worst country for commuters, again scoring pretty poorly across the board. Lots of cities in the UK have light rail services such as the famous London Underground, but it seems that the cost, time taken, and even eco-friendliness of the British commute, all require some improvement.

Another English-speaking country completes the bottom three countries for commutes. Canada actually scores quite well on a couple of metrics such as, the cost of fuel per litre and cost of public transport. However it was massively let down by its CO2 emissions, which were actually higher than any other country we analysed, at 13.8 tonnes per capita.

The best countries for…

While we’re all encouraged to walk or catch public transport to work where possible, most of us still choose to drive, meaning that one of our biggest expenses is that of fuel. Turkey was the cheapest country when it came to filling up, paying just ₺7.92 per litre, which works out at £0.66. If you drive a car to work, make sure that you’re fully covered with comprehensive insurance.

If you do choose to take public transport to work, you’ll still have to shell out for a pass each month, whether you catch the train, bus, or perhaps a light rail system like the Tube. The cheapest country for a monthly pass was Romania with an average monthly cost of RON 79 (£14). Remember that the more that you drive, the more expensive your vehicle insurance will be, which is another reason to use public transport.

Possibly the worst aspect of the daily commute is the time it takes, whether you find yourself stuck in traffic or being held up by signalling delays on the train. But in Iceland, this seemingly isn’t much of a concern, with the average daily commute taking just 15 minutes. Iceland’s unique geography means that almost all of the population are concentrated in coastal areas with around 80% of the inland area being uninhabitable, workers generally don’t have as far to commute.

Given that it has the most electric vehicles, it’s little surprise to see that Norway also has the highest proportion of public vehicle charging stations, with over 3,700 per million people. EVs have been common on Norwegian streets for many years now, with the impressive infrastructure playing a big part in this.

Commuting is a big part of a country’s CO2 emissions, which is why so many are trying to drive people towards greener alternatives. The country that seems to be making the best progress so far is Malta, with CO2 emissions of just 3 tonnes per person.

The best places for commuting in the UK

Taking the top spot is Milton Keynes, the largest town in Buckinghamshire. While many who live in the town commute into London, it’s clearly also well set up for easy and green commuting on its own too. Milton Keynes scored highly on almost all of the factors that we looked at and had the highest number of electric vehicle charging stations (134.7 per 100,000 people) This means, it’s well set up for a greener commute in the years to come, and also had a short average commute of just 14.1 minutes.

In second place is Coventry, in the West Midlands. Like Milton Keynes, Coventry has a particularly robust charging network for electric vehicles. It  was also amongst the cheaper towns and cities when it comes to the cost of a monthly public transport pass, which averages out at just £50.90. The city’s “Very Light Rail System” is set to be operational by 2024 and will make it even easier for locals to get to work.

Despite being located around 76 miles away, Peterborough is another city that sees many people commute into London, as it is ideally placed on the East Coast Main Line. Peterborough had by far the highest number of electric vehicles per 100,000 people, with 8,411 and also had one of the shortest commutes of the places that we looked at, with an average of just 14.1 minutes.

The worst places for commuting in the UK

But not all parts of the UK are such a dream when it comes to commuting, with the market town of Stafford, in the West Midlands, holding the unfortunate title of the worst place to commute. While it scored ok in terms of commute cost and times, it was the green factors where the town lagged behind, with low numbers of both electric vehicles and chargers, as well as having high emissions per capita of 6.6 tCO2.

As one of the busiest cities, not just in the UK, but in the whole world, it’s probably no surprise to anyone who’s been on the Tube at rush hour that London makes the top three worst places to commute. The capital wasn’t just the most expensive city when it comes to public transport, with a travel pass costing an average of £162, but it’s also the city with the longest average commute, with Londoners spending an average of 36.3 minutes getting into work.

The third worst place for commuters is Doncaster, in South Yorkshire. Much like Stafford, the town actually scores quite well in terms of the amount of time people spend commuting and the cost of doing so, but was let down in the eco-friendliness factors.

The best place in the UK for…

One of the biggest complaints that people often have with commuting is the cost, especially when it comes to public transport. While monthly passes help to bring the cost down they can still be a big drain on your finances. However, the town with the cheapest monthly public transport pass on average was Barrow-in-Furness, in Cumbria, at £20.

Another Cumbrian city came top when it came to the actual time spent commuting into work, with workers in Carlisle taking an average of 12 and a half minutes to get to their place of work. The city is served by multiple rail services across the country and also has a number of local bus services too.

We also wanted to take a look at which towns and cities are already making their commutes greener, with the government looking to ban the sale of new petrol and diesel vehicles by 2030. And it’s Peterborough that’s leading the way, with 8,411 electric vehicles in the city per 100,000 people.

As well as coming top overall, Milton Keynes also led the way when it came to the availability of public places to charge your electric vehicle, with 134.7 per 100,000 people in the town. Having a strong charging infrastructure will be key to towns and cities in the coming years as more and more people switch to electric cars.

Finally, transport is one of the biggest contributors to harmful CO2 emissions, which is why we’re all encouraged to make use of public transport rather than using our cars to commute. Hastings was the place with the lowest emissions per person, with just 2.6 tonnes per person.

“After nearly two years of lockdowns and working from home, the world is finally beginning to open up again, which means across the globe many of us are heading back into the office and having to deal with the stress of the daily commute.

“It’s interesting to see our research reveals Ireland and the United Kingdom are the two worst countries in the world for commuting. Ireland comes out as the worst, notably having the highest public transport pass cost, followed closely by the UK which scores poorly across the board - from high transport costs to a long average commute time. Turkey came out as the best country for commuting largely due to the affordability of commuting and for scoring highly on the green factors which we looked at.

“It will be interesting to see if the daily commute improves over the coming years, with more countries adopting a hybrid way of working, which in return should hopefully see the average commute time and stress of travelling, decrease in countries across the world.”

For both our global and UK rankings, we analysed a range of locations on a number of different factors relating to the ease, affordability, and environmental impact of commuting, giving each place a normalised score out of ten for each factor.Before taking an average across all the factors to reach our final commuting score out of ten.

Fuel price: The average gasoline price per litre according to Trading Economics.

Average commute time: The average time spent commuting into work according to Eurostat and The Geography of Transport Systems.

Average commute time: The average time spent commuting into work according to the Office for National Statistics.

Electric vehicles: The number of licensed ultra low emission vehicles according to the Department for Transport’s licensed vehicles data.