These are the most commonly featured cars in video games

With different cars featuring heavily in video games over the years, Uswitch sought to find out which cars feature most often in the gaming world, as well as popular brands and colours.
Share this guide

These are the most commonly featured cars in video games header.

Cars have featured heavily in a variety of video games over the years, enabling users to get around, race, and take part in nail-biting high-speed chases on screen. Whilst these cars may not be the main focus of the games, a lot of thought will have been put into the model and make of the vehicles used during the development stage.

But which cars appear most frequently in the digital world? To find out, Uswitch analysed video games to determine which make and model appears the most, as well as the colours and brands too.

The most featured cars in video games 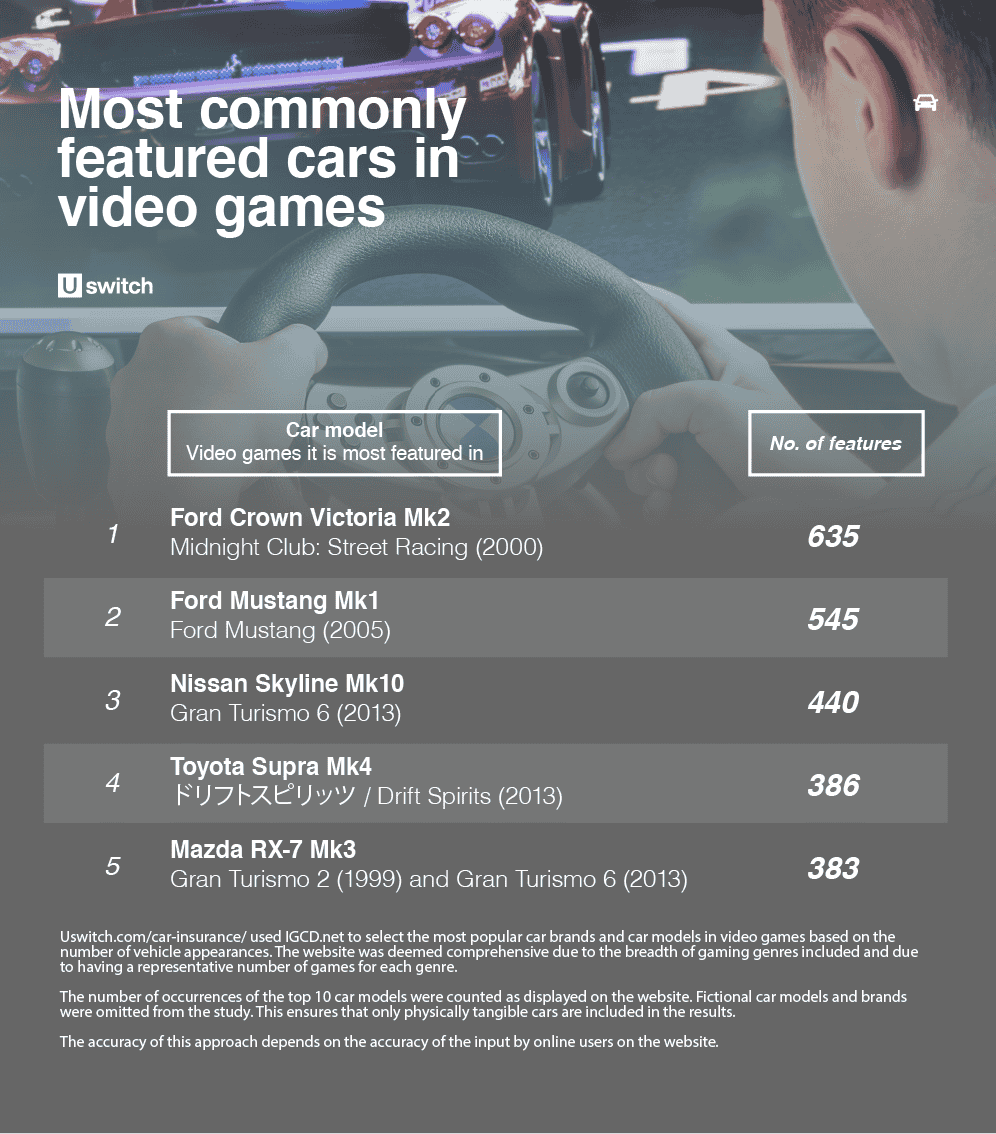 The most common car model featured in video games is the Ford Crown Victoria Mk2. Despite taking the top spot, it’s not the most luxurious car – in fact it’s often used in the real life as a police car or taxi, so it’s certainly no showstopper. Despite the Crown Vic being a somewhat plain sedan, the car has amassed 635 video game appearances all-in-all – most of which are in the 2000 game Midnight Club: Street Racing (6). Interestingly, of all appearances, the car is painted in the colour yellow 187 times.

When the Ford Mustang Mk1 was first introduced in 1965, it became wildly popular due to its sporty ‘pony car’ appearance. Without having to worry about the cost of damaging these electronically produced cars, video game developers have featured the Ford Mustang 545 times.

It has featured 19 times in the aptly named video game Ford Mustang (2005) in various colours and models. As the game is dedicated to racing the famous vehicles, it’s unsurprising that the car is found in the colour red the most (72 times) – a classic racing car colour.

The classic sports car has been featured in racing games including Forza and Need for Speed over the years, however the car was featured in Gran Turismo 6 (2013) the most, with 15 appearances.

As a sports car best known for its powerful engine and striking appearance, it should come as no surprise that the car is featured seven times, in various colours and models, in the 2013 mobile racing game リフトスピリッツ (Drift Spirits).

The Mazda RX-7 Mk3 is the fifth most common car model in video games with 383 features. Out of these appearances, the car features in yellow the most (75 times).

Thanks to its lightweight Wankel rotary engine, this sports car is designed to go fast so it comes as no surprise that it is most popular in the Gran Turismo game franchise, gaining most of its features in the second and sixth instalment of the game with 16 appearances in each. 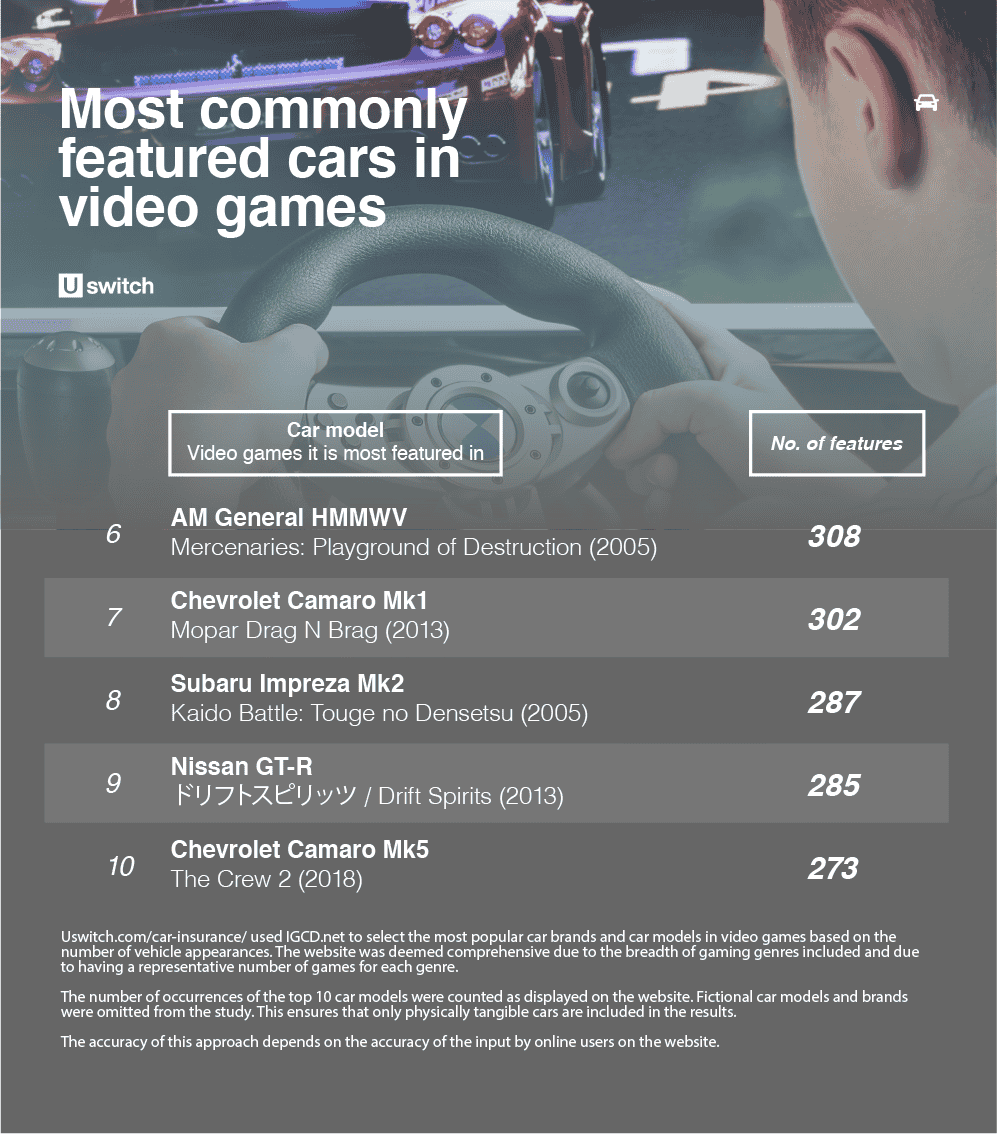 The AM General High Mobility Multipurpose Wheeled Vehicle (HMMWV), known colloquially as the Humvee, is the sixth most common car in video games due to racking up 308 appearances.

Due to its military roots, it’s no wonder it has the most appearances on Mercenaries: Playground of Destruction (2005) – a game centring military action in North Korea – and is most commonly painted in ‘army green camouflage’ (94 times).

The Chevrolet Camaro is the seventh most featured vehicle in video games, racking up 302 appearances across various games since its production in 1967.

This classic American ‘pony car’, often cited as one of the classic cars "you need to drive before you die", is featured in Mopar Drag N Brag (2013) the most, with six appearances. Of all appearances, the car is painted in the colour blue the most (58 times).

Subaru Impreza Mk2 ranks as the eighth most common car in video games, as we found the car featured 287 times overall. Produced and assembled in Japan, it seems fitting that it is included in the Japanese video game Kaido Battle: Touge no Densetsu (2005) the most (seven appearances).

Our analysis also found that the car features in the colour blue the most – in fact, in more than half of the car’s appearances the vehicle is painted in this shade (159 times).

The Nissan GT-R, despite being first manufactured in 2007, has impressively managed to appear 285 times in video games and rank among the top 10. Of these appearances, the car is featured in the colour black the most (57 times).

Similarly to the Toyota Supra, this high-performance sports car is featured most often in the 2013 mobile racing game リフトスピリッツ (Drift Spirits), with the car appearing 14 times in various colours and models.

Rounding off the top 10 most common cars in video games is the Chevrolet Camaro Mk5, another American ‘pony car’, as it has racked up an impressive 273 appearances in video games.

This vehicle can be found in the video game The Crew 2 (2018) seven times, the most of all other video games in our study, and is most frequently painted in the colour yellow (93 appearances). 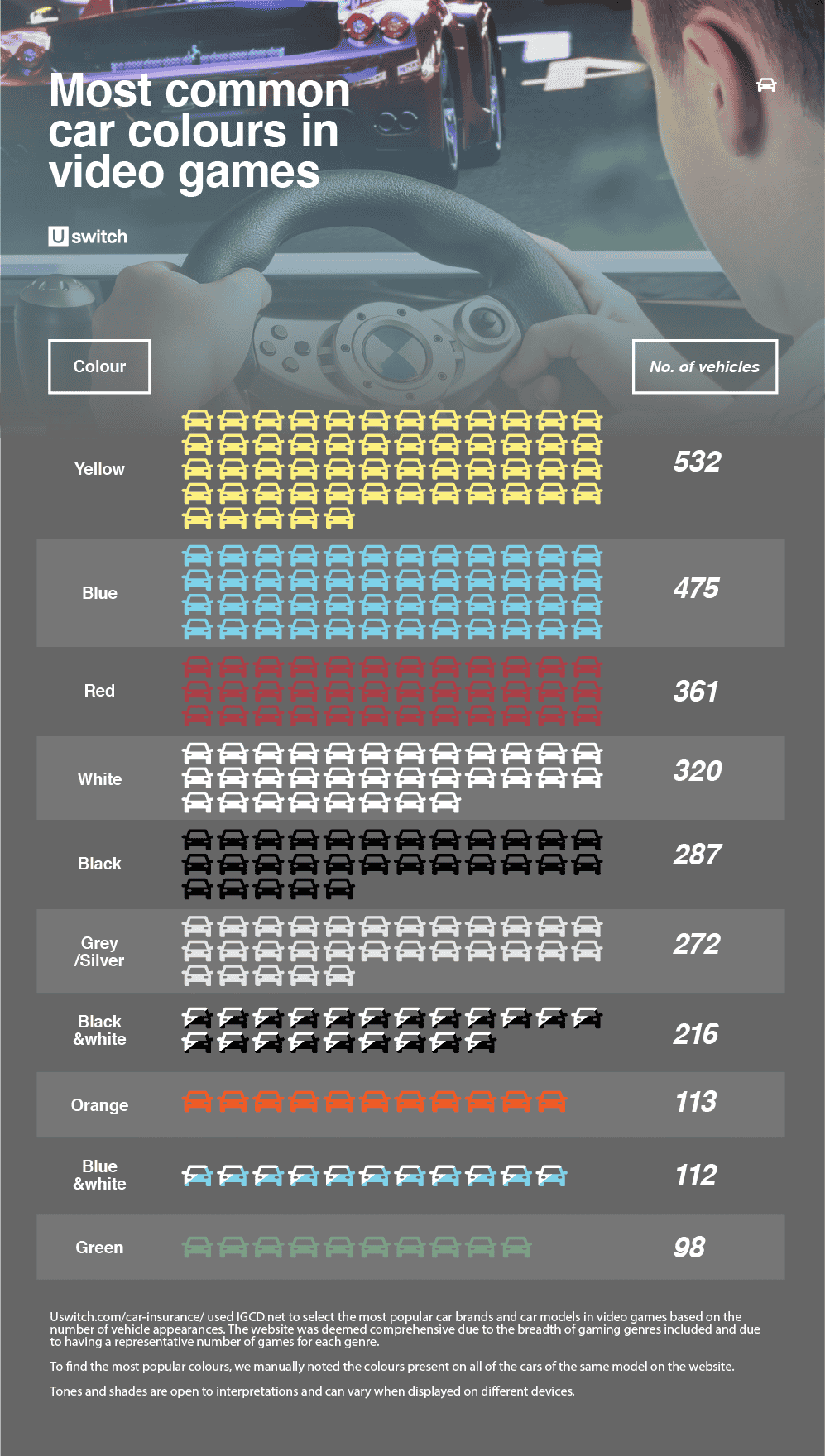 Most commonly featured cars in video games by colour table.

Surprisingly, the most popular car colour used in video games is yellow. Of the video games studied there were 532 yellow car appearances, from canary to a deep mustard yellow. Blue comes next, with 57 fewer appearances.

The colour red, which many would expect to see at the top of the list due to its strong connotations with racing, has 361 appearances in video games. That’s a surprising 171 fewer than yellow in first place.

Common car colours used in the real world – including white, black, and grey/silver come in fourth, fifth and sixth place, with 320, 287 and 272, respectively. Further to this, black and white together are also a common mix, with 216 vehicles sporting these colours in video games.

Most commonly featured cars in video games by brand table.

Taking specific models out of the equation, we were also intrigued to identify which car brands are featured the most in video games. The top spot may come as no surprise with Ford cars showing up a staggering 8,888 times in games over the years.

Interestingly, luxury car manufacturers Lamborghini and Cadillac don’t feature as high on the list as some may expect, with only 1,552 and 1,213 features, respectively.