Would you give up your car to help the environment?

Over the past year, most UK drivers have significantly lowered their average miles, replacing the daily commute with a weekly trip to the supermarket and not much else. However, one of the few positives in this dramatic lifestyle change has been the impact on our carbon footprints.

As part of a £22million 'future transport' scheme funded by the government, motorists with high polluting cars in Coventry will be offered up to £3,000 in credits to use on public transport – in exchange for giving up their car for two years. It is hoped this move will inspire people to switch to public transport and reduce dependency on cars in major cities.

Here at Uswitch, we wanted to see if the scheme will inspire drivers around the country to give up their cars and consider a more environmentally friendly alternative.

To gauge opinion on the initiative, we spoke to more than 1,000 UK drivers in the UK about the plan and asked whether they’d be willing to give up their car in exchange for free public transport. 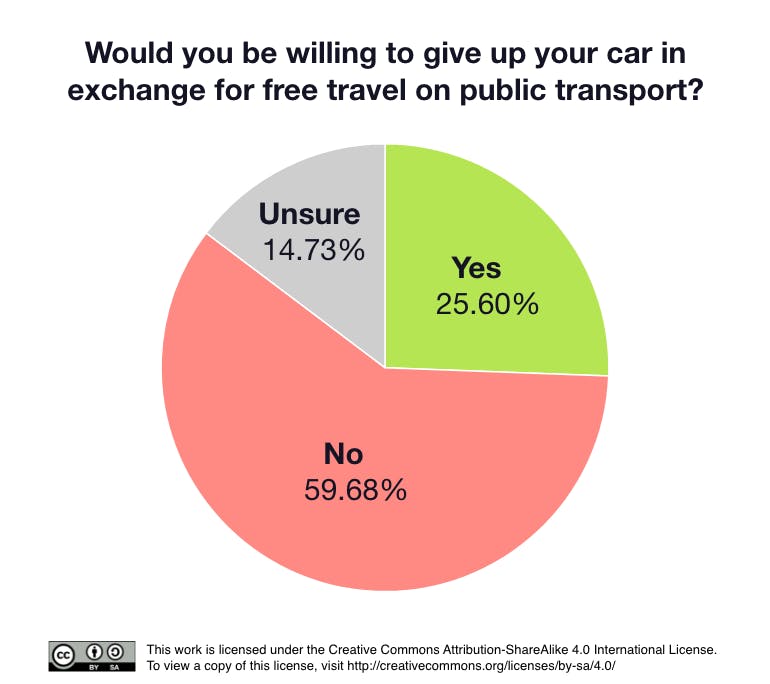 As we travel through the generations, there is a distinct difference in how drivers feel about giving up their cars.

Half of younger drivers (17-24) said they would be willing to agree to giving up their cars in exchange for free public transport access, while less than 39% said they would be opposed to this. This compares to just 15% of the 55+ age group. In fact, more than 72% of respondents aged 55 and over said they wouldn’t be interested in taking part in the initiative. 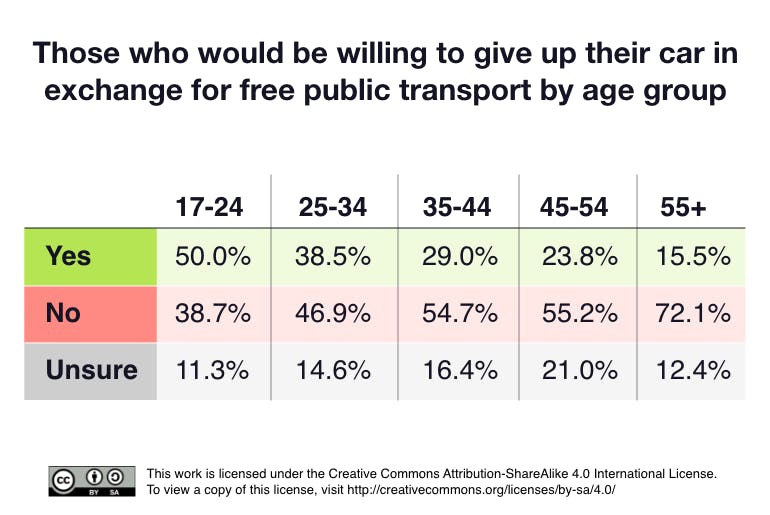 Men are more open to the idea than women

Men are marginally more likely to give up their cars in return for free public transport. Almost 27% of men said they would give up their vehicle, while just over 24% of women said the same. 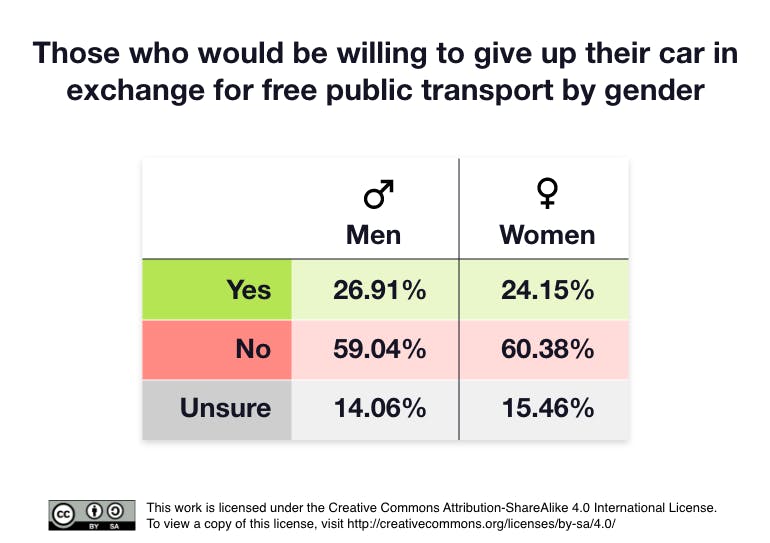 Vehicles have long been blamed for increases in carbon emissions, which has led to incredible innovations in motoring. As such there have been huge emissions improvements in cars, vans, lorries, and motorbikes over the past 20 years, and we’re now at a stage whereby the majority of cars on our roads are the most eco-friendly they’ve ever been – whether it be due to innovations under the bonnet or the widespread introduction of hybrid and electric vehicles.

On top of this, our cities have been taking steps to reduce the number of cars on their roads, with London pioneering the UK's low emissions zones and more cities following suit.

Subsequently, millions living in big cities rely on public transport day to day, in order to move around. So, it’s perhaps no surprise to learn that drivers in big cities say they are more likely to give up their cars than those in smaller cities.

Breaking the findings down by location, it seems those in large cities would be more inclined to give up their personal modes of transport, in exchange for free public transport. More than a third (34%) of London drivers would be willing to take part in the scheme, while nearly 34% of Manchester drivers and nearly 26% of Birmingham drivers said the same. Drivers in Plymouth would generally be opposed to the idea, however, with fewer than 10% of drivers saying they would give up their car, and more than four in five saying they wouldn’t. 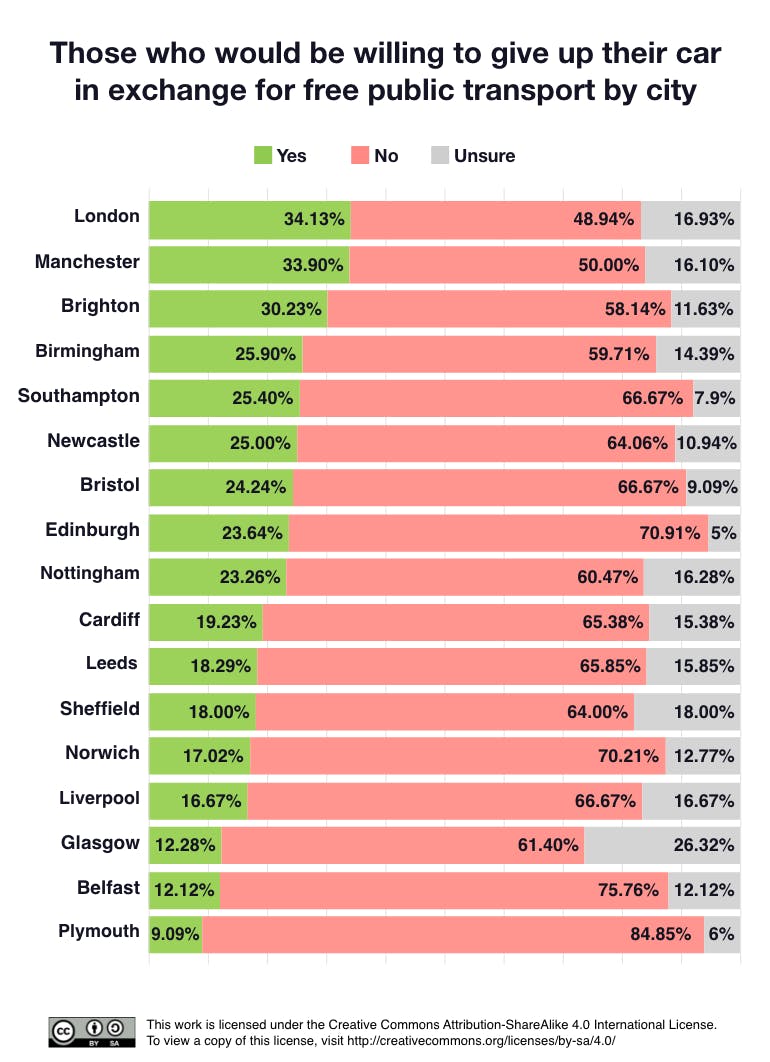 Joel Kempson, Car Insurance Expert, at Uswitch, said, “From single use plastic to fast fashion, we’re all aware of the small changes we can make that reduce our carbon footprint. But more needs to be done in order to hit green targets. As such, the government is under a lot of pressure to reduce harmful carbon emissions. Reducing reliance on vehicles, while simultaneously investing in greener modes of public transport, is an easy way to do this."

“However, we have to bear in mind that initiatives like this aren’t always going to be viable for everyone. Shift workers, people who need to travel to multiple destinations and those with large families may not be able to rely on public transport, so it’s important to look at what we can achieve as individuals in our global effort to reduce our carbon footprint.”