The most popular car brands according to social media

Millions use social media channels daily to post photos of cars - from the sleek and sporty to the ultra-luxurious. But which car brands are shared the most on social media? Uswitch.com finds out.
Share this guide

Most popular car brands according to social media

In just over a decade, the impact of social media has gone from being a source of entertainment, to being deeply embedded in our daily lives. We use these platforms for sharing photos of friends and family, trips around the world, and throwbacks of special occasions. They’re used to share images of things we love - and that includes our cars.

While a huge following on these sites might be an indication of a car brand’s popularity, which brands are truly the most popular? Which brands are being hashtagged when petrol heads share photos of their pride and joy?

Uswitch sought to find out by conducting a study into how the world’s most famous car brands are portrayed on social media, namely on Instagram, TikTok, Twitter and Pinterest. From this study, we identified which car brand is shared the most per platform, and overall.

The most popular car per social media channel 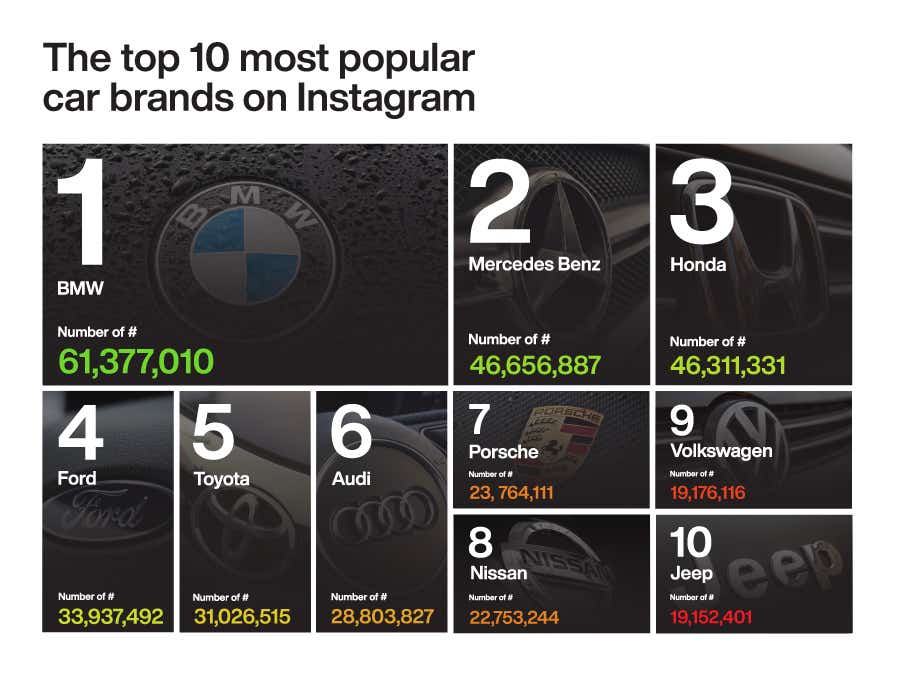 In first place, and leading by over ten million hashtags, is one of the most recognisable luxury car brands in the world, BMW. The German car company amassed an astounding 61,377,010 hashtags.

Second on the list is a brand with a truly global appeal - Mercedes Benz. The German car manufacturer racked up an incredible 46,656,887 hashtags. Japanese manufacturer, Honda, is in third place, with 46,311,331 hashtags.

With a drop of over ten million hashtags to 33,937,492, the fourth position goes to one of the highest valued automotive brands worldwide - American company, Ford.

With a total of 31,026,515 combined hashtags, Toyota (the world’s top-selling car maker in 2020) secured a spot among the top five cars on Instagram.

A few spots lower than its German counterpart, Audi is just a few million hashtags shy of the top five, with 28,803,827 hashtags.

The top 10 most popular car brands on TikTok 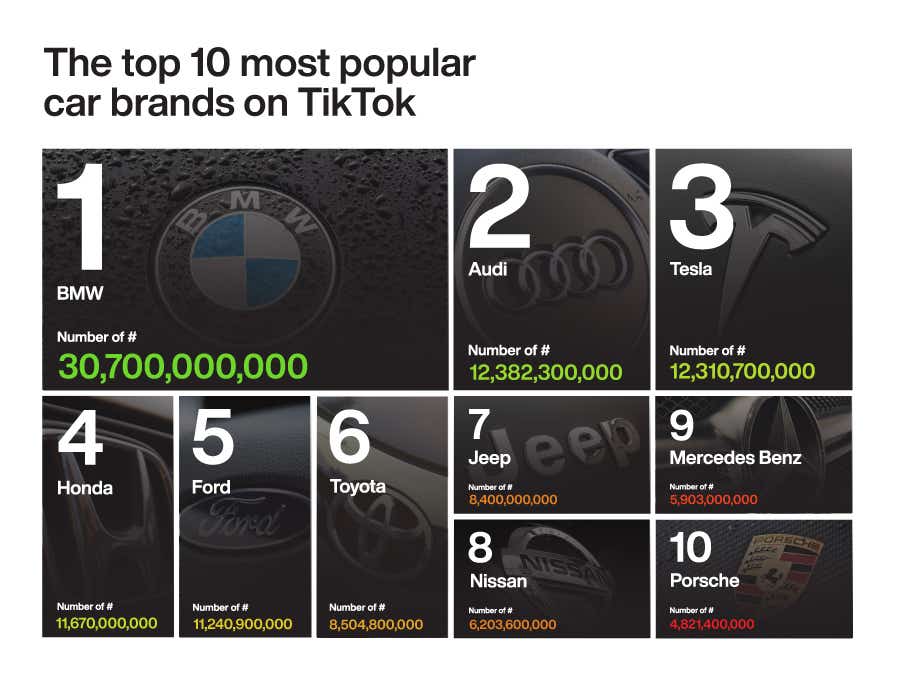 Top 10 most popular cars on TikTok

With almost three times as many hashtags as the runner up, BMW is once again the most popular brand. The leading premium manufacturer gained a remarkable 30,700,000,000 hashtags.

Though missing out on a spot among the top five on Instagram, the prestigious German brand, Audi, ranked in second place on TikTok, with 12,382,300,000 hashtags.

With a similar score, leading electric car brand, Tesla, is in third place, with 12,310,700,00 hashtags, despite not making it to the top 20 on Instagram.

Although second on the list on Instagram, Mercedes Benz dropped to ninth place on TikTok with a total of 5,903,000,000 hashtags.

Porsche also dropped three places from seventh spot on Instagram to tenth on TikTok. The exclusive car brand gained a total of 4,821,400,000 hashtags. 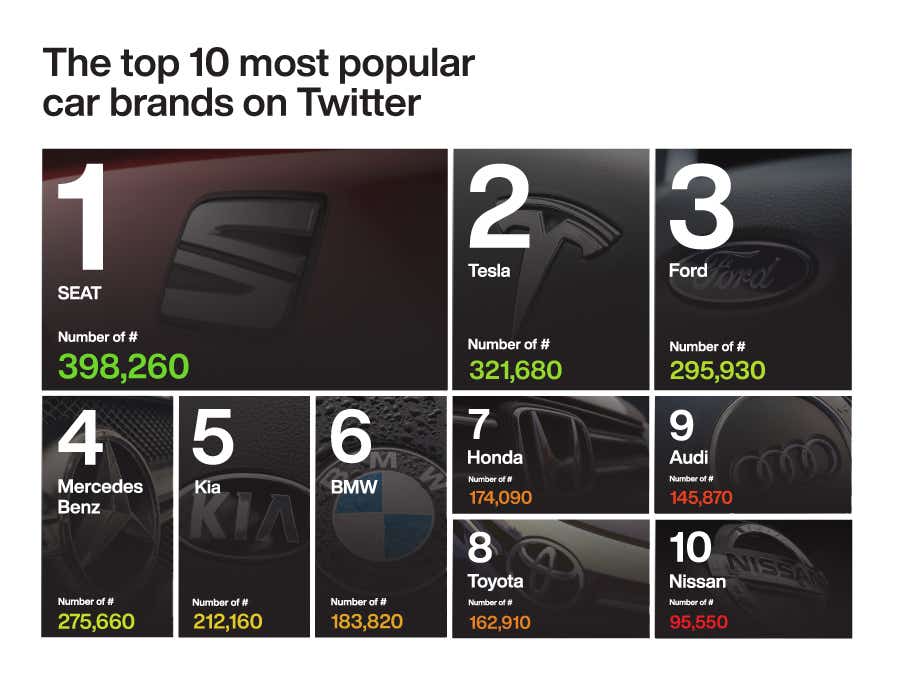 Though just making it to the top 40 on Instagram and TikTok, Spain’s first family car manufacturer, SEAT, is at the top of the list on Twitter, with 398,260 hashtags.

Tesla is up one spot from TikTok, narrowly missing out on the top spot as runner up. The American brand gained a total of 321,680 hashtags.

Having made it to the top five on both Instagram and Twitter, Ford sits comfortably among the top five most popular car brands on Twitter, with 295,930 hashtags.

Although Mercedes Benz dropped from the second spot on Instagram to the ninth spot on TikTok, it has risen to fourth place on Twitter with 275,660 hashtags.

Despite just making it to the top 30 on Instagram and the top 20 on TikTok, Kia is miles ahead on Twitter, with 212,160 hashtags - placing South Korea’s oldest car manufacturer among the top five.

The leading brand on both Instagram and TikTok, BMW, dropped to sixth place on Twitter with 183,820 hashtags.

Brands at the bottom of the list include luxury British car brands, Rolls Royce, in 37th with 2,700 hashtags, followed by Land Rover in 38th with 2,430 hashtags. 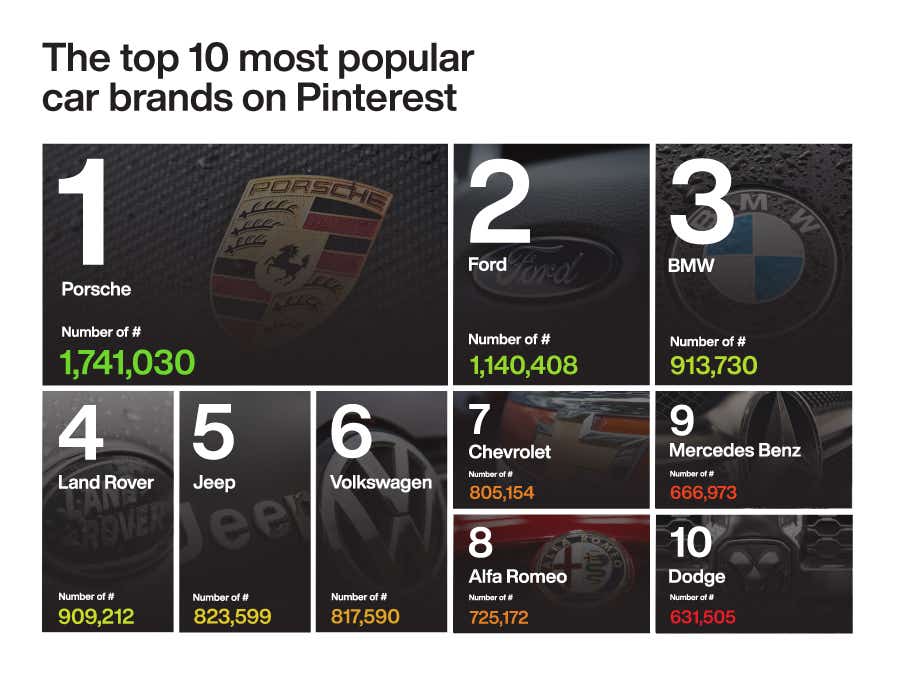 Porsche took the number one spot on Pinterest. Best known as the quintessential sports car maker, the German car brand had 1,741,030 pins. Following in second place, also with more than one million pins, is American car manufacturer, Ford, with 1,140,408 pins.

Also among the top 10 across all platforms is BMW, securing third place on Pinterest with 913,730 pins.

Although not making it to the top 20 on the other channels, Land Rover is fourth on Pinterest, with 909,212 pins.

Ranking fifth, Jeep makes its first appearance among the top five social media channels, with 823,599 pins on Pinterest. Next up in sixth place, is Volkswagen, with 817,590 pins.

In seventh and eighth places are Chevrolet (805,154) and Alfa Romeo (725,172) - the car brands’ first entries among the top 10 of all the social networking sites studied.

In the same position as TikTok, Mercedes Benz is also in ninth place on Pinterest, with 666,973 pins. Rounding off the top 10 on Pinterest, however, is the American car brand, Dodge, with 631,505 pins - its first appearance in the top 10 across all platforms.

The most popular car brands overall on social media 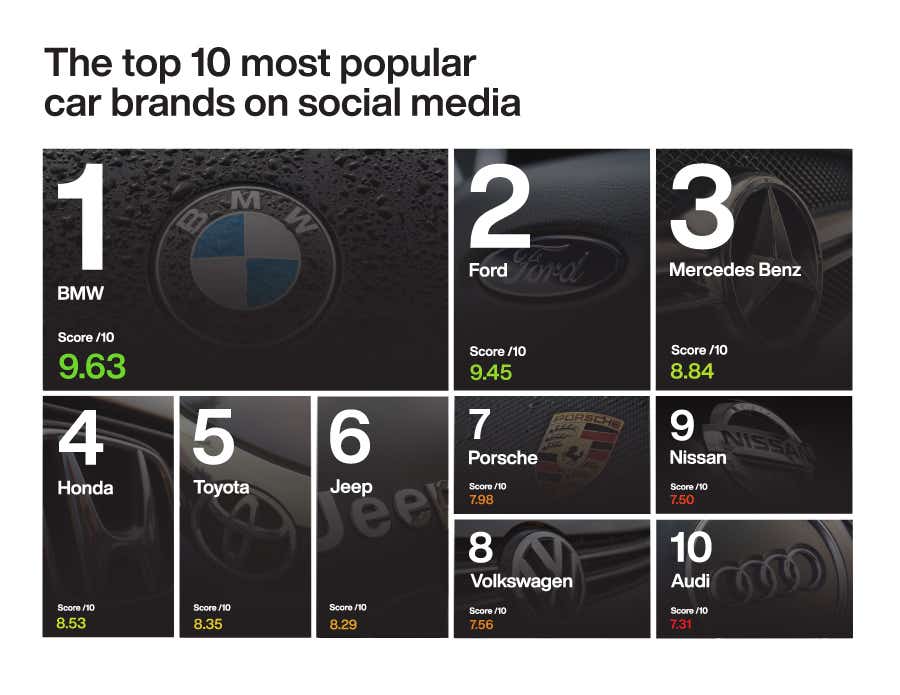 The undisputed automotive king of social media is BMW, which isn’t surprising as the brand secured the number one spot on two out of the four social media channels in our study. With over a century-long history, rich with innovation and motorsports, the automotive giant scored a popularity score of 9.63 out of 10 - the highest overall.

Having ranked among the top 10 most popular brands across all channels, Ford is the runner up in second. The second-largest US-based car manufacturer scored a respectable 9.45 out of 10.

Coming in third and claiming bronze is one of the most coveted brands in the world - Mercedes Benz. The second German car manufacturer among the top three most popular car brands overall scored 8.84 out of 10.

Making it to the top five with similar scores are Japanese brands Honda and Toyota, with scores of 8.53 and 8.35 out of 10, respectively.

The second American brand to make the top 10 overall is Jeep, which places in sixth, with a score of 8.29 out of 10. This iconic brand is synonymous with off-roaders in the same way that Hoover is with vacuum cleaners.

1. Uswitch.com sought to determine which car brand around the world is the most shared on social media.

3. The number of social shares for each car brand contained within the sample was then collected from four social media channels: Instagram, TikTok, Twitter, and Pinterest. Total hashtag counts for each car brand were collected via mediatoolkit.com’s metric over a specific period of time. Where necessary search term operatives were applied to guarantee accuracy.

4. Where appropriate on Instagram and TikTok, variations were also considered (e.g., #porschecars #porschelife).

5. To accurately compare results across social channels, the AVG. PERCENTRANK function was used to calculate a weighted total index score for each car brand.

6. The weighted overall index scores for each car brand were then ranked in descending order to determine the most popular car brand on social media.

7. The data was collected between October 4th and 6th 2021 and is subject to change.