As Christmas draws closer, many motorists are getting into the festive spirit. From driving home to see family and friends, to picking up the Christmas turkey, December is always a busy month for drivers.
Share this guide 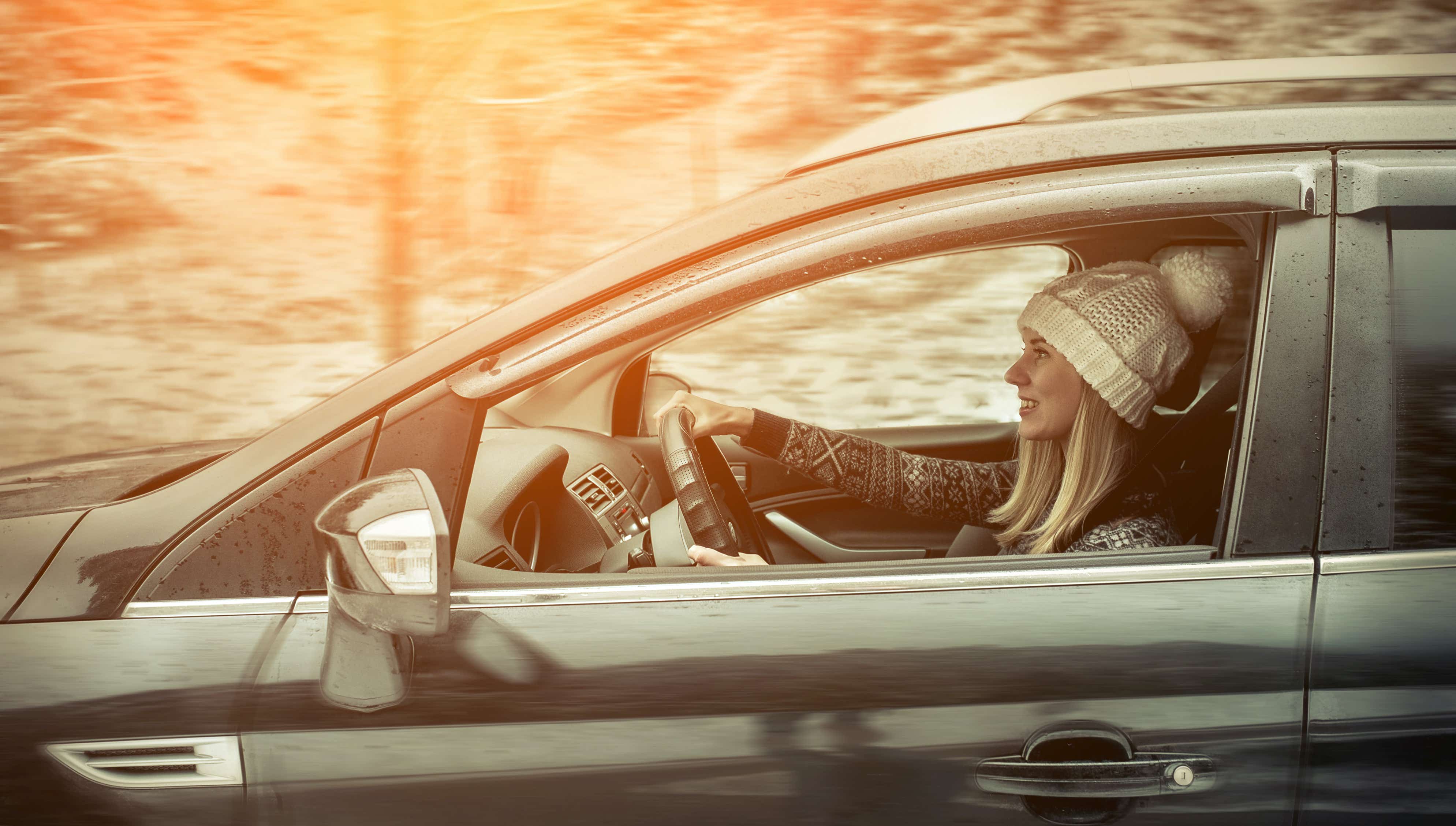 Uswitch car insurance expert, Ben Smithson, said: “Driving at Christmas can be exciting, however there are some little-known things that could put your safety at risk and invalidate your insurance.

Whilst singing along to Christmas songs and adding decorations to your car may seem like a fun way to get into the festive spirit, they could also be a huge distraction and land you a hefty fine or increased car insurance premium.

Keeping your car safe from crime is also increasingly important during the festive season, as the winter months are notorious for car theft. Always keep your vehicle locked and avoid leaving expensive items on display. Not everyone has the best of intentions at this time of year.”

Will putting Christmas decorations on my car invalidate my insurance?

Last month, over 3,240 Brits searched Google for ‘car reindeer antlers’, whilst a staggering 10,320 have been looking for ‘Christmas car decorations’.

Whilst Christmas car decorations may definitely add some festive cheer to your motor, they could also invalidate your insurance policy, as companies may refuse to pay out on claims if you’re involved in an accident.

This is because decorating a car is considered a vehicle modification. Companies invalidate cover because upgrading the aesthetics of a vehicle can make the car more attractive to thieves and criminals. It could also mean your car insurance premiums increase, as the likelihood of you claiming on a policy would have also increased.

Anything from snowflake stickers to tinsel could cause the agreement to be compromised, so it might be worth keeping the festive décor to just your home.

Can I get fined for singing Christmas songs in the car?

Whilst we love nothing more than a Christmas sing-along, it seems the car isn’t the best place to practice your karaoke skills, as those who sing and dance behind the wheel could be hit with a whopping fine of up to £5,000 if they get caught.

Drivers who have a bit too much fun with music whilst on the road could pick up a ‘driving without due care and attention’ or even a ‘dangerous driving’ charge.

If you’re singing loudly, dancing in your seat and generally getting into the groove, then you’re at risk of being distracted from the job at hand – which is keeping your eyes on the road.

If there’s evidence, either dashcam footage or testimony from a police officer, that you were dancing and singing prior to an accident, you could ultimately be prosecuted for dangerous driving or driving without due care and attention.

The penalties can be severe, with a fine of up to £5,000 and nine points on your licence in the most serious of circumstances.

Loud music can also put you at risk of a fine, so avoid cranking the volume up too high. Although police officers don't have the power to pull a driver over for listening to loud music, they can penalise you if they believe it is causing a distraction. This could include the volume of the music drowning out audible safety warnings, like other motorists honking their horns, or the sirens from emergency services vehicles.

Is it illegal to put a Christmas tree on the roof of my car to carry it home?

Whilst it’s not illegal to drive home with your Christmas tree tied to your roof, you could land in trouble with the law if it’s not securely fitted, or too big.

The Highway Code states motorists must secure their load and ensure heavy and sharp objects are safe.

Size matters, too, as your Christmas tree must be small enough to be transported safely. Large trees should not be carried by small cars or vans, as they could easily fall off and cause an accident, which would invalidate your insurance policy.

Police officers will stop drivers if they deem a load to be too great and can issue fines of £100 for breaking the rules.

To avoid increasing your risk of an accident, or landing a fine from the police, ensure your Christmas tree is properly secured to your car roof before driving home. If you’re in doubt, ask a professional to help assist you tie the tree down.

Do more car thefts take place during the festive season?

As the winter nights draw in and daylight hours are reduced, an analysis of stolen and recovered car theft data has revealed 25% more vehicles are stolen in the winter months than in the summer.

Car tracking firm Tracker discovered that as the months get colder and darker, stolen vehicle rates get higher. According to police data, overall, January is the worst month for vehicle crime, with a whopping 41,029 reported in the first month of 2019.

December and January are peak months for car crime, as it’s when we typically experience harsh frosty mornings, and drivers often leave cars unattended whilst de-icing, which presents itself as a prime opportunity for criminal gangs.

December is also a time when we’re likely to store expensive items, such as Christmas presents, in our cars, which can also leave you more vulnerable to car theft.

To keep your car safe when you’re heading out, try to park in a busy, well-lit area or secure car park if possible, and ensure all windows are closed and doors are locked.

On cold days, don’t leave your car unattended with the engine running while it warms up, even if it’s parked on your own driveway or street.

Are my Christmas presents covered by my car insurance provider if they are stolen?

Whilst we don’t like to think anyone would steal Christmas presents from our car, unfortunately it does happen, so it’s important to take extra precaution in the run up to Christmas.

If items are stolen from an unlocked vehicle, car insurance providers may refuse to cover the cost of the goods. It’s also worth checking your policy, as expensive items may not be covered due to personal possession limits. Comprehensive car insurance policies will typically include some level of personal possessions cover but it doesn’t usually come as standard on other policies, such as third party only and third party, fire, and theft.

The amount you can claim for personal possessions on your car insurance can vary depending on your provider and your policy agreement, however many range from £100-£1,000. Keep your receipts for special purchases.

It’s also worth noting, even if you are covered, making a claim for stolen presents may also result in the loss of your no claims insurance, which will increase your premiums.

Expensive Christmas presents stored in a car make your vehicle a higher target for thieves, so to avoid falling victim to the crime, it’s safer to remove them when you leave the car.

If you have no choice, make sure valuables and shopping are locked in the boot, taking care that nobody is watching you.

The same can also be said for expensive food and alcohol which could also make your car more attractive to criminals.

Are there really more police checking for drink drivers over the Christmas period?

As the party season is often fuelled by alcohol, it’s no surprise that the police force crackdown on drink driving during December.

This year, there will be extra checkpoints across the UK, requiring motorists to undergo breath and drug testing.

During last year's operation, police data shows 3,231 people failed a breath test or refused to give a sample over just a fortnight, while 1,175 failed a roadside drug test.

The 80mg limit allows a man of average height and weight to drink as many as four units of alcohol, or two pints of normal-strength beer, and still remain within the law (although there is no stated timeframe on this, and it’s not something that is recommended). Women can drink three units, the equivalent of a large glass of average strength wine, however, it’s important to note that age, weight, stress levels, and your metabolism all affect how your body absorbs alcohol.

If you’re found guilty of drink-driving, you could face up to six months imprisonment, an unlimited fine, and a driving ban of at least one year.

For quick car insurance cover, take a look into hourly car insurance policies. These are especially useful for insuring young drivers who's yearly policies may be more expensive.