The world's tourist attractions with the most affordable parking

Touring your chosen holiday spot in a car can means contending with the issue of pricey parking fees. So Uswitch has analysed the number of car parks nearby the most popular tourist destinations, as well as their average prices.
Share this guide

Getting around by car seems to be the preferred option for people who want more flexibility whilst travelling on holiday, which can be tricky if relying on buses or trains. However, touring your chosen holiday spot in a car can mean contending with the issue of pricey parking fees.

This is why we've decided to give travellers driving abroad a helping hand by comparing average parking costs for worldwide capitals and their landmarks. To do this, the car insurance experts at Uswitch have analysed the number of car parks nearby the most popular tourist destinations, as well as their average prices on Parkopedia.

The top 10 cheapest landmarks for parking 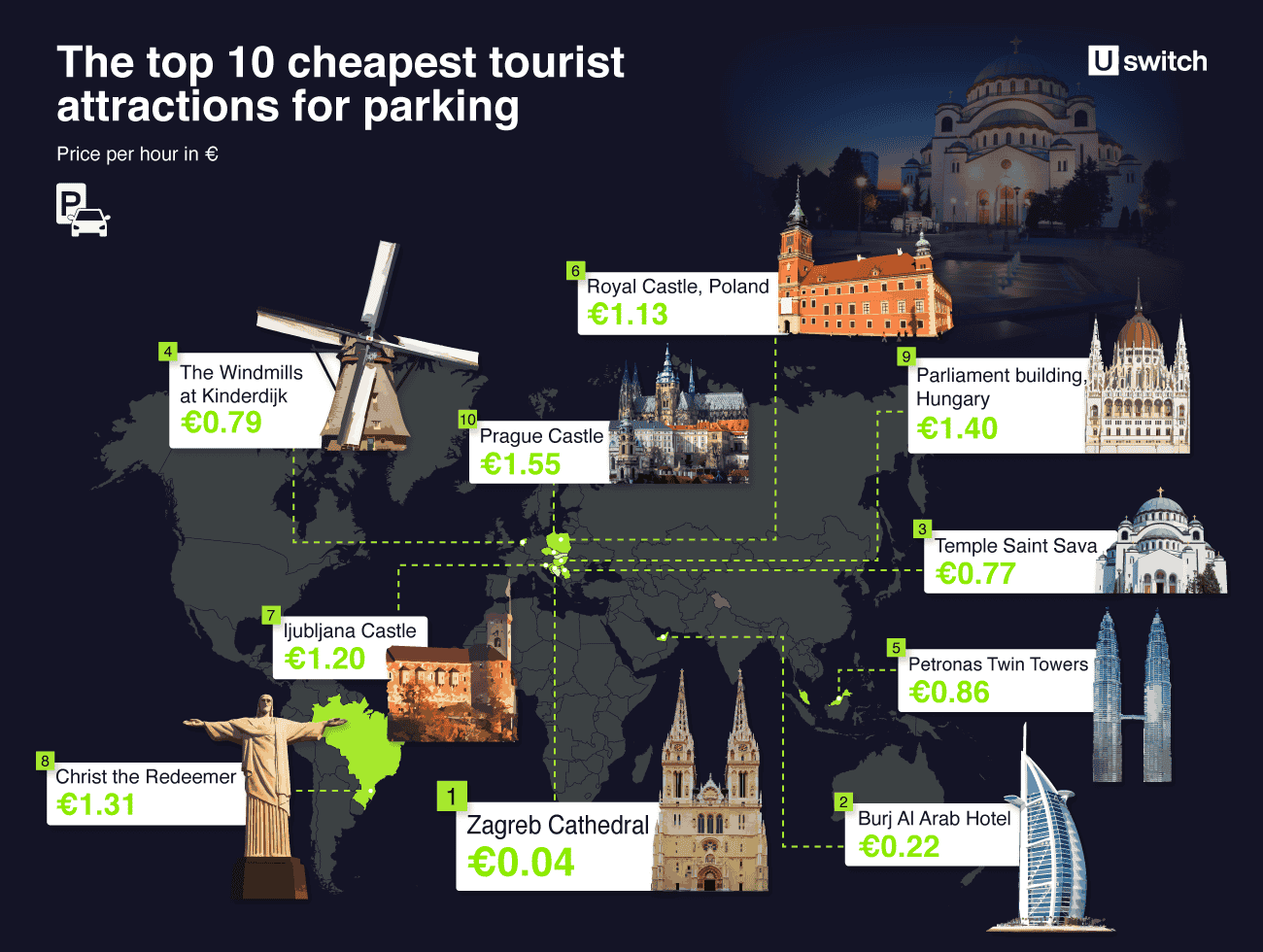 Right at the top of our list as the destination with cheapest parking is the architectural masterpiece that is the Zagreb cathedral. Located in the north-western capital of Croatia, Zagreb is one of the most popular tourist spots in the country.

If you're travelling by car to visit the cathedral, or you’re looking to visit some of this historical city’s iconic cafes, then you’re in luck. Although 98% of parking here is paid, with an average charge of just €0.04 per hour, you won’t have to worry at all about the expense.

It’s not just Zagreb that can offer you a cheap parking space, all of our top five least expensive landmarks for parking work out at less than €1 per hour. This means you can park near amazing landmarks such as the stunning Temple Saint Sava in Belgrade, the Petronas Twin Towers of Kuala Lumpur, or the fascinating Windmills of Kinderdjik in the Netherlands for less than €0.90 an hour.

One of the more pleasantly surprising results we’ve come across is the price of parking surrounding the fabulously luxurious Burj Al Arab Hotel in Dubai, which has an average hourly parking charge of just €0.22. A stay for yourself at this seven star hotel might break the bank, but a stay for your car certainly won’t!

Another striking element of the research is just how varied the locations are for cheap parking at landmarks. With parking for all of our top 10 cheapest destinations averaging less than €1.60 per hour, you can find great deals on parking in locations scattered throughout various places as a driver across Europe and Asia.

This includes the amazing castles of both Warsaw in Poland and ljubljana in Slovenia, where parking for both landmarks works out at under €1.20 per hour. The ancient Prague Castle is also one of the cheapest on our list, but is a little more expensive than Warsaw and Ijubljana at €1.55 per hour.

If castles aren’t your thing but you’d still like to see some stunning architecture, number eight on our list and a hit with Freddy Mercury are the Parliament Buildings in Budapest, Hungary. Parking is available here within walking distance for just €1.40 per hour.

Taking seventh place with slightly cheaper fees than Budapest is another architectural wonder. The remarkable Christ the Redeemer statue charges just €1.31 per hour for nearby parking. That means pricey stay for your car won’t be an issue when visiting the jewel in the crown of Rio de Janeiro.

The top 10 most expensive landmarks for parking 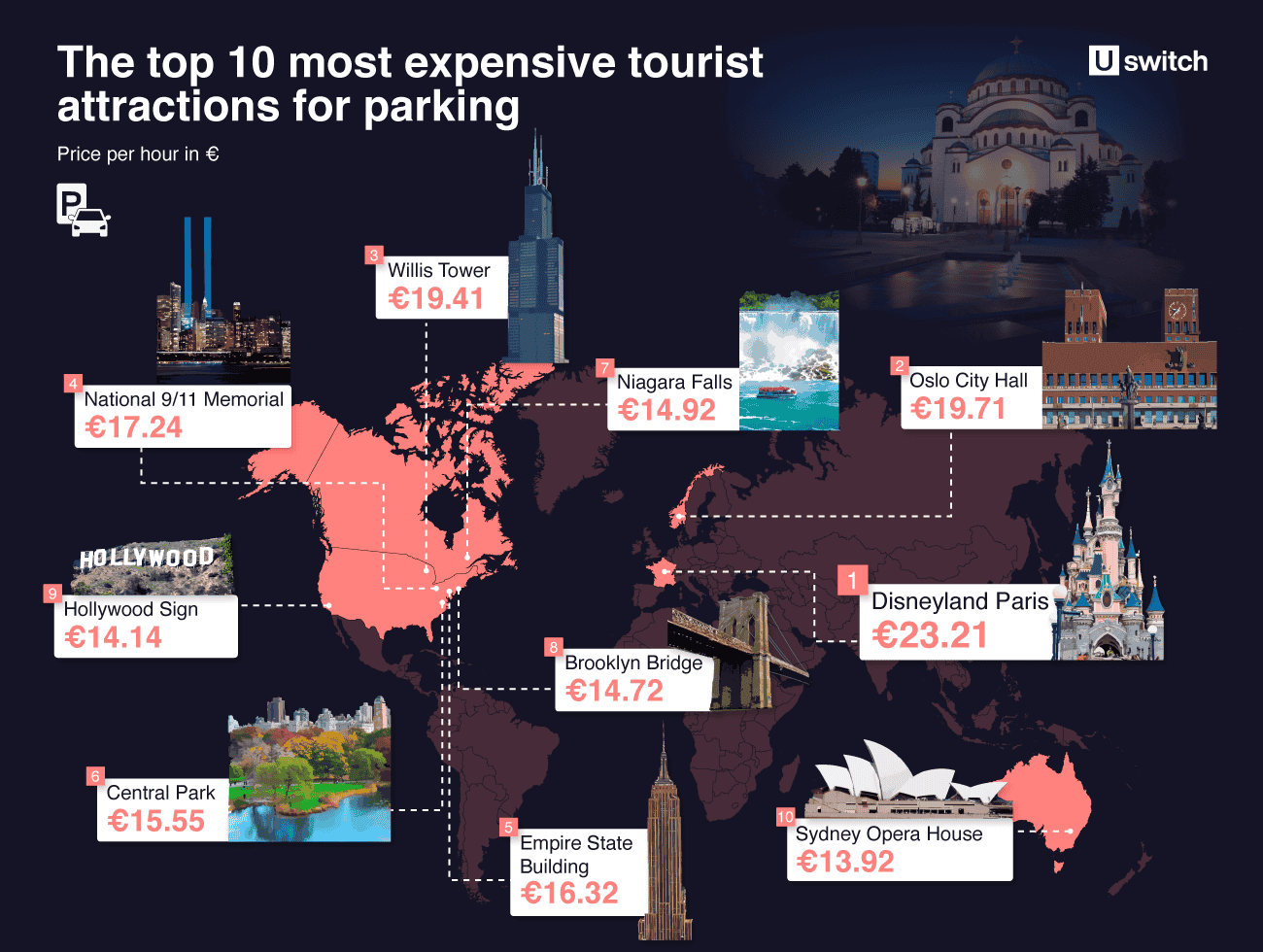 While the very affordable parking for the destinations listed above may have surprised you, there are unfortunately some tourist spots charging some pretty astronomical parking fees if you’re travelling by car.

Taking the top spot for most expensive hourly parking is Paris, home to the Eiffel Tower, one of the highest rated tourist attractions in all of Europe, as well as the Disneyland Paris resort. Parking in Paris means paying an average hourly fee of €23.21. This means that the cheapest parking spot on our list is almost 600 times less expensive than parking at Disneyland! Considering using Disneyland parking space from 9am until 5am could cost you over €185, we’d definitely recommend factoring these fees into your budget.

The second most expensive landmark for parking is Oslo City Hall in Norway’s capital. While this imposing building is a popular go-to for tourists in Norway, an hour’s stay means forking out an average of €19.71.

Keeping company amongst our list of 10 most expensive landmarks are Australia’s Sydney Opera House, boasting ‘Sydney’s best views’, and the dazzlingly powerful Niagara Falls in Canada. Both of which charge over €16 for an hour of parking. Just next door to Canada is the country with the most mentions within our top 10 list for costliest parking, the United States. With a massive six out of our 10 most expensive landmarks for drivers listed as being here, it’s worth being wary of parking fees for whichever tourist destination you visit while in the US.

Aside from the Willis Tower in Chicago and the Hollywood Sign overlooking Los Angeles, four of these places can be found in just one city; New York. With the Big Apple frequently ranking as the number one tourist spot in the US for international travellers, you may well be one of the tens of millions of visitors looking to visit NY each year.

If so, with parking at the Brooklyn Bridge, Central Park, The Empire State Building and the 9/11 Memorial all costing between €14.50 and €17.50, you’ll be glad to know that there are numerous public transport options available to you. Getting around in one of New York’s famous yellow taxi cabs or on the subway may take a bit of getting used to, but it does mean you won’t have to spend a big chunk of your budget on parking the car.

Are you thinking of going away soon? Whether you’re getting to your destination by train, plane or car, it’s always best to look into getting the right travel insurance for your journey.

Uswitch.com/car-insurance sought to determine which landmarks around the world have the most affordable parking.

A seed list of over 100 famous European landmarks was collated with data from DestGuides and List Challenges.

Subsequently, over 8,000 car parks within approximately 2km of each landmark contained within the sample were identified on Parkopedia, and the following data extracted: capacity, prices, restrictions, and features.

The hourly rate for each car park was then calculated and converted to EUR according to European Central Bank data (as on 14/10/2021) to accurately compare parking prices across landmarks.

For more accurate results, the features and restrictions were also utilised to distinguish private and public car parks, and those that are suitable for electric cars.

Finally, the data was aggregated to determine the total number of parking spaces for each landmark, the weighted average hourly rate, and the ratio of different car park types.

The weighted average hourly rate was calculated by dividing the sum product of parking spaces and hourly rates by the total parking spaces as described in the formula below. This approach allows us to account for the varying capacity and rates in each car park to arrive at a more robust estimate of average prices.

The final results were then ranked in ascending order to determine the landmark with the most affordable parking.

A median threshold was applied to filter out landmarks with fewer than 6,000 parking spaces.