The most common car-inspired baby names

If you’re expecting a baby, then you know that choosing a name can be as hard as choosing car insurance. Maybe the thought of naming your child after a car has even crossed your mind.
Share this guide

Car names have a reputation for being cheesy, and you don’t want to be the reason your kid asks “Dad, why is my name Volvo?”. However, it turns out many parents have taken inspiration from cars and some car names are much more fitting for a baby!

The car insurance experts at Uswitch have looked at government data since 2000 to find the most popular car-inspired names in the USA and UK.

The most popular car-inspired baby names

The most popular name in the UK is Morgan, with a link to English car manufacturer Morgan Motor Company. The name isn’t gender-specific - thousands of both boys and girls have been given the name since 2000.

The stand-out names for girls were Mercedes and Kia. There have been over 1,200 baby girls in the UK given each name! 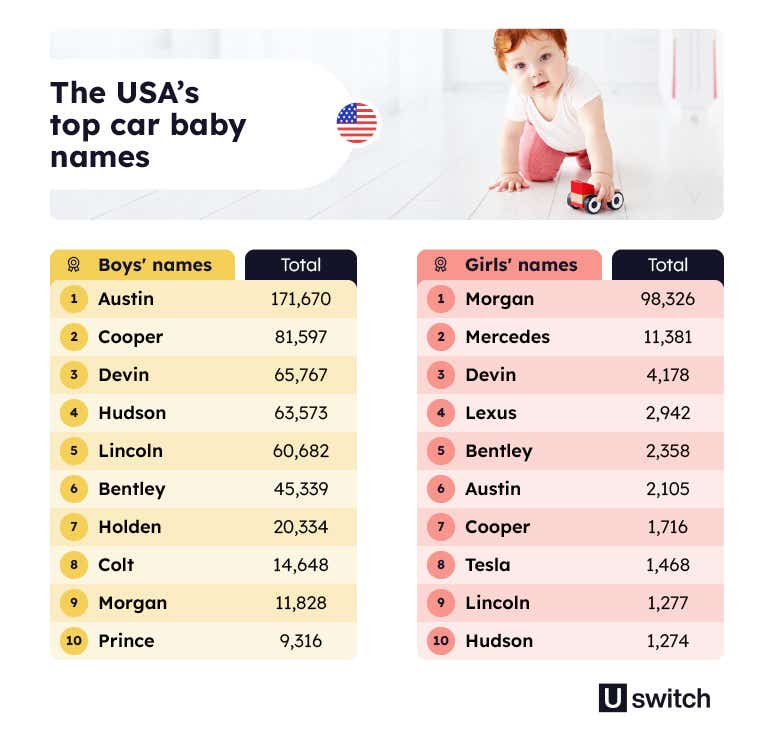 The clear winner for the most popular American boys’ name is Austin. 171,000 baby boys in the USA were named, perhaps inspired by the Austin Motor Company.

The most unique car-inspired baby names 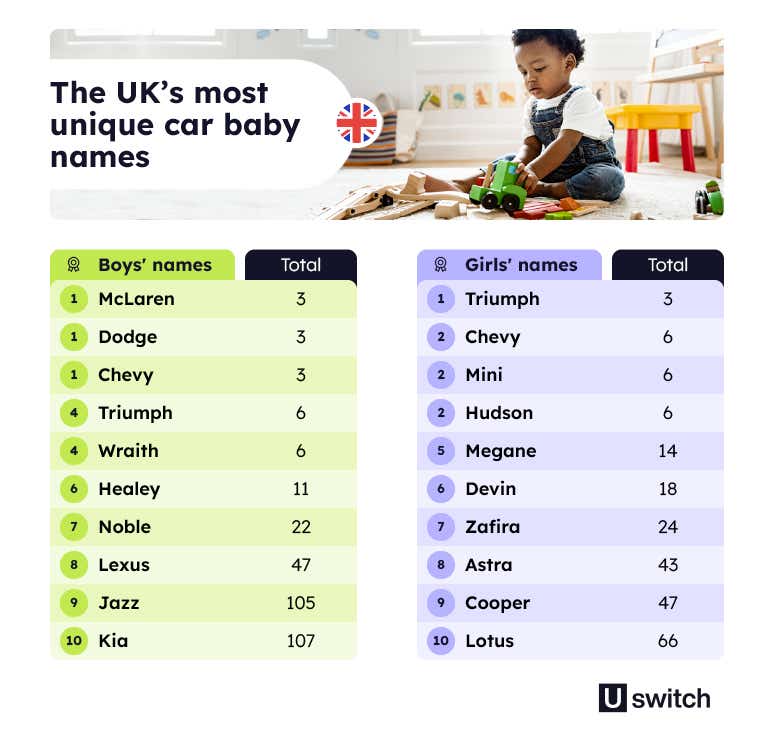 Of all the car-inspired baby names, these ranked as the most obscure. The least popular in the UK were McLaren for boys and Triumph for girls.

However, these names haven’t been chosen for babies born over the last few years. The most recent babies named McLaren were born in 2000, and the three baby girls sharing a name with Triumph Motor Company were born 15 years ago! 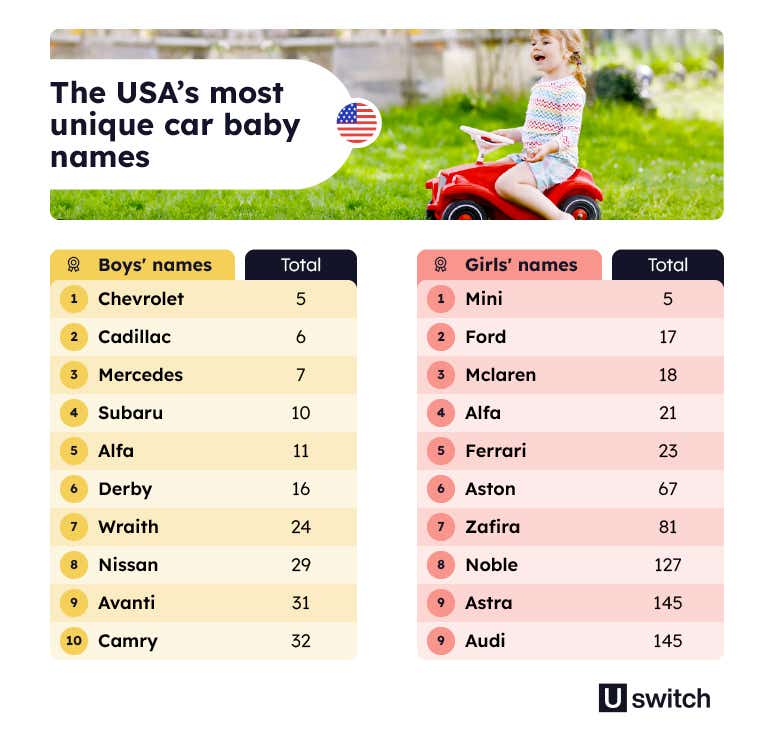 In the USA the least popular car baby name for boys was Chevrolet, with five babies in 2017 named after the automobile company. For girls, the least common name was Mini, most recently given to 5 girls in 2016. Ford, McLaren and Zafira were among the other least common names for girls in the USA. 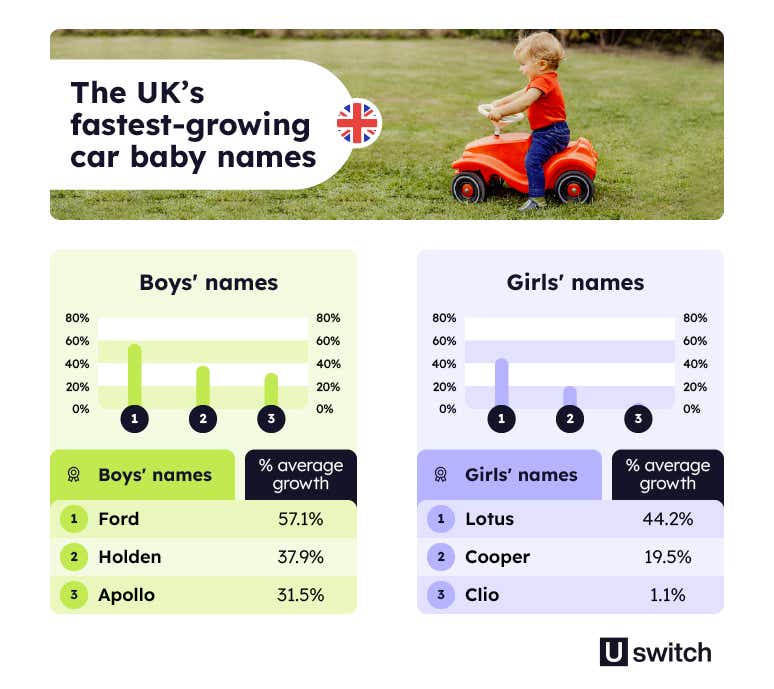 The clear winner for the fastest-growing baby name in the UK is Ford. Since 2014 there has been a 57% increase in babies named after the American motor company. The most popular year for this baby name was 2019 - records show 13 babies were called Ford.

The fastest-growing girls name in the UK is clearly Lotus. As of 2014, six girls share a name with the British motor company, and the aquatic flower. 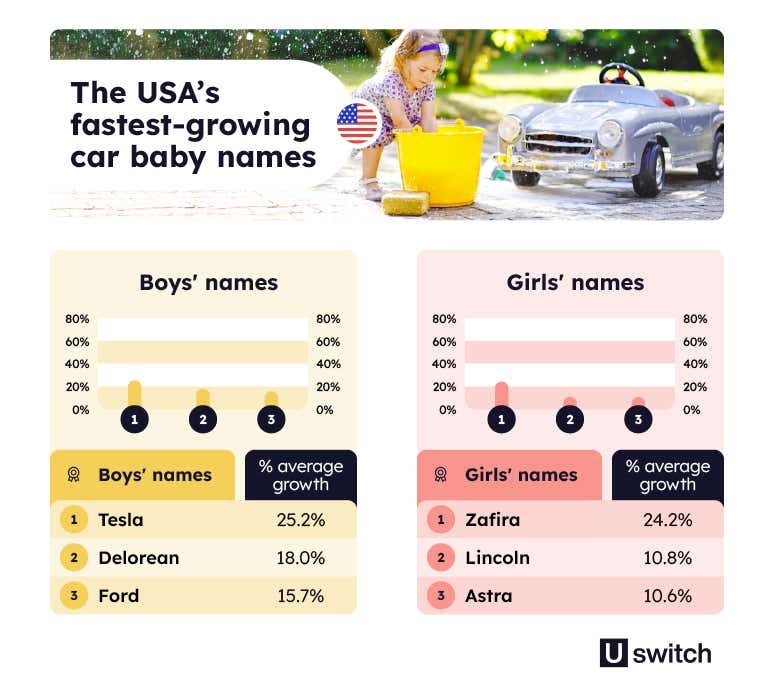 Although Tesla didn’t rank in the overall top 10, the name’s popularity has been rising like insurance quotes since 2014. The company was founded in 2008 and by 2009 there were already five baby boys given the name in the States.

Since 2014 the name’s popularity has increased by 25%! The most notable peak was in 2016 when 18 boys were called Tesla, right around the time Tesla sales broke US records.

After Kristen Bell’s daughter, Lincoln Bell Shepard was born in 2013, a spike in the name’s use can be seen. In 2014, twice as many baby girls in the US had the name, compared to the previous year. 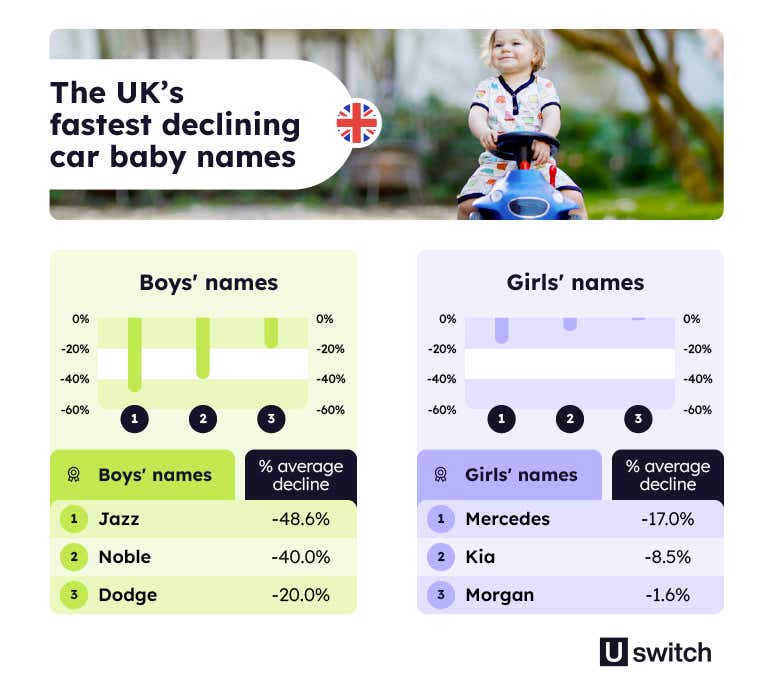 The Honda Jazz hasn’t sparked baby name inspiration for a while - although popular until 2004, no boys in the UK have been given the name since 2017.

While Mercedes remains a popular name for girls, its frequency is declining. In 2014 there were 47 girls in the UK named after the luxury car company, yet in 2019 that figure dropped to just 17! At an almost 17% decrease, this name is becoming less popular. 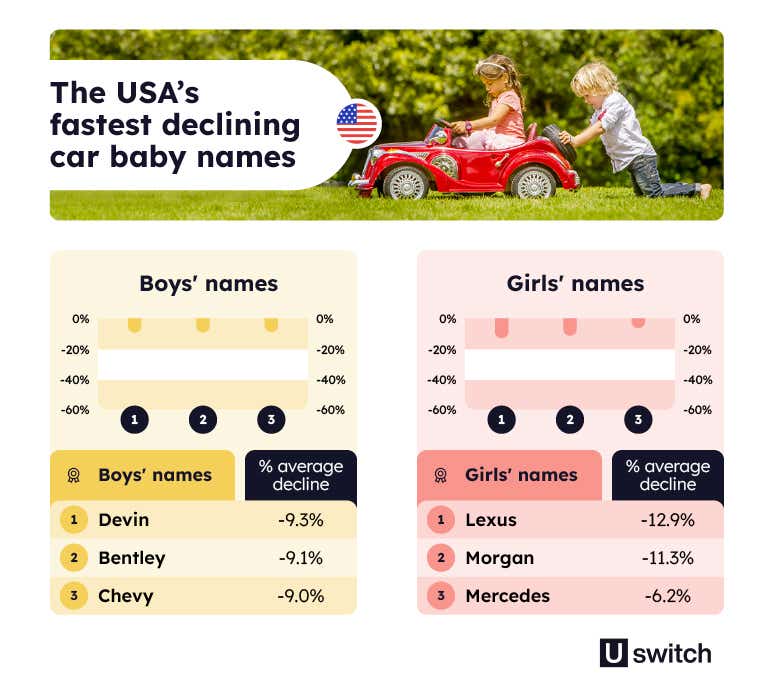 Devin, which ranked as the first most popular car-inspired boys name, has been steadily decreasing over recent years.

“With the names of vehicle manufacturers and car models being so unique, it’s easy to see why parents might take inspiration from the growing list of enticing names.

“Interestingly, as the world of motoring starts to adapt to the introduction of more electric vehicles, we’re starting to see inspiration from EV brands too. For example, the name Tesla for boys has grown in popularity by 25.2% in the USA.”

Taking turns on the school run can sometimes be stressful. To have the flexibility of car sharing without worry, make sure your multicar insurance policy covers each car registered to the same address.

Uswitch analysed data from the UK government on boys names and girls names from 2000-2019 and used US government data for baby names for boys and girls between 2000-2019.

Uswitch took a list of 86 names based on car manufacturers and models, removing some popular names that have also been given to cars, such as Zoe.