One in three drivers admit to splashing pedestrians with puddles

With more wet weather expected this month, motorists are urged to be extra cautious when driving through puddles to prevent splashing pedestrians on the side of the road.
Share this guide 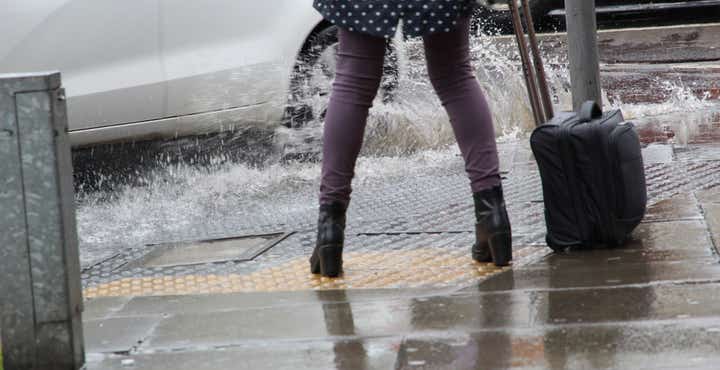 Pedestrian getting soaked by puddle

While it may often seem unavoidable, a new survey from Uswitch reveals that one in three drivers risk a fine of up to £5,000 after admitting they’ve drenched someone walking on the pavement.

Uswitch car insurance expert, Florence Codjoe, said: “Drivers who deliberately splash pedestrians on the pavement are breaking the law and could face being fined from £100 to £5,000, along with receiving three penalty points.

It’s always important to take extra caution when driving in wet weather and slow down when you see a pedestrian walking by.”

So, where are you most likely to get drenched by a driver? And do those who commit the offence feel guilty afterwards? Let’s take a closer look.

Splashing with intention to soak

While one in 18 drivers across the UK admit to intentionally soaking a pedestrian on the side of the road, thankfully, not all drivers are doing it on purpose.

From our survey of 1,277 UK motorists, almost half (45%) say they would feel terrible afterwards, with drivers in Scotland (58%) feeling the most remorse.

On the other hand, those living in Yorkshire are the most menacing, with 1 in 8 admitting they would feel no guilt at all after splashing a pedestrian.

When it comes to age, younger drivers aged between 17-24 are the worst offenders, with 32% guilty of the offence and 1 in 10 doing it with an intent to soak.

The most cautious drivers

From our survey, our results show women to be more cautious than men, with 10% more women (39%) than men (29%) stating they would drive around a puddle to avoid splashing a pedestrian.

Drivers over the age of 55 also prove to be the most aware, with 51% avoiding puddles in comparison to 25% of those under the age of 24.

When it comes to location, those living in Liverpool earn first place when it comes to avoiding splashing pedestrians (52%), whilst motorists in Plymouth are least likely to drive around puddles avoid splashing (28%).

How furious are pedestrians?

It’s no surprise that pedestrians are raging when they’re splashed on the side of the road, but who’s the most likely to report a driver to the police?

Interestingly, young people aged between 17 and 24 are most likely to contact the police, with one in nine revealing they have done this in the past.

Men are more likely to report the offence than women, along with pedestrians in Liverpool, where 1 in 10 have reported an incident.

What does the law state?

Under section three of the Road Traffic Act 1988, it is illegal to splash someone, as it amounts to driving “without reasonable consideration for other persons.”

Those found guilty of deliberately driving through puddles and splashing pedestrians will likely be hit with a £100 fixed penalty notice and three penalty points if caught by police.

However, if motorists are thought to be driving in a manner that “amounts to a clear act of incompetence, selfishness, impatience, and aggressiveness” then the maximum fine of £5,000 could be issued.

Alongside this, if drivers fail to pay the £100 fixed penalty, they could also face the maximum £5,000 fine if the case is taken to court.

Uswitch car insurance expert, Florence Codjoe, said: “Deliberately splashing a pedestrian with a puddle is a criminal offence and is not acceptable in the eyes of the law. Not only could you face a fine and penalty points, if convicted you’ll likely see your car insurance premiums increase.

Insurance companies price their car insurance products based on a series of risk calculations, predicting how likely a driver is to make a claim.

If you have a motoring conviction, insurers will see you as a greater risk and your insurance premiums will increase.”

Convicted drivers could then see a huge increase in their car insurance premiums.