The most expensive films for car crashes

With car crashes, explosions and overturns all featuring regularly in our favourite pulse-racing blockbusters, Uswitch were keen to estimate just how much these scenes might cost in car damage.
Share this guide

The most expensive films in car crashes.

Many of the world’s biggest box office hits feature dramatic, fast-paced action scenes, with well-executed stunts and moment after moment of risk and danger. So, it should come as no surprise that cars are often an important prop, with vehicles of all makes and models suffering gunshot damage, explosions, accidents, and collisions to pull off the perfect cinematic hit. But have you ever considered the costs associated with these scenes?

To discover which blockbuster titles are most costly in terms of car destruction, car insurance experts at Uswitch considered the make and model of the vehicles damaged in movies, the severity of car damage (0% to 100%), the manufacturer suggested retail price (MSRP) of the car, and the movie's year of release, to calculate the total estimated cost of damage per movie*.

The top 10 films with the highest estimated car damage costs 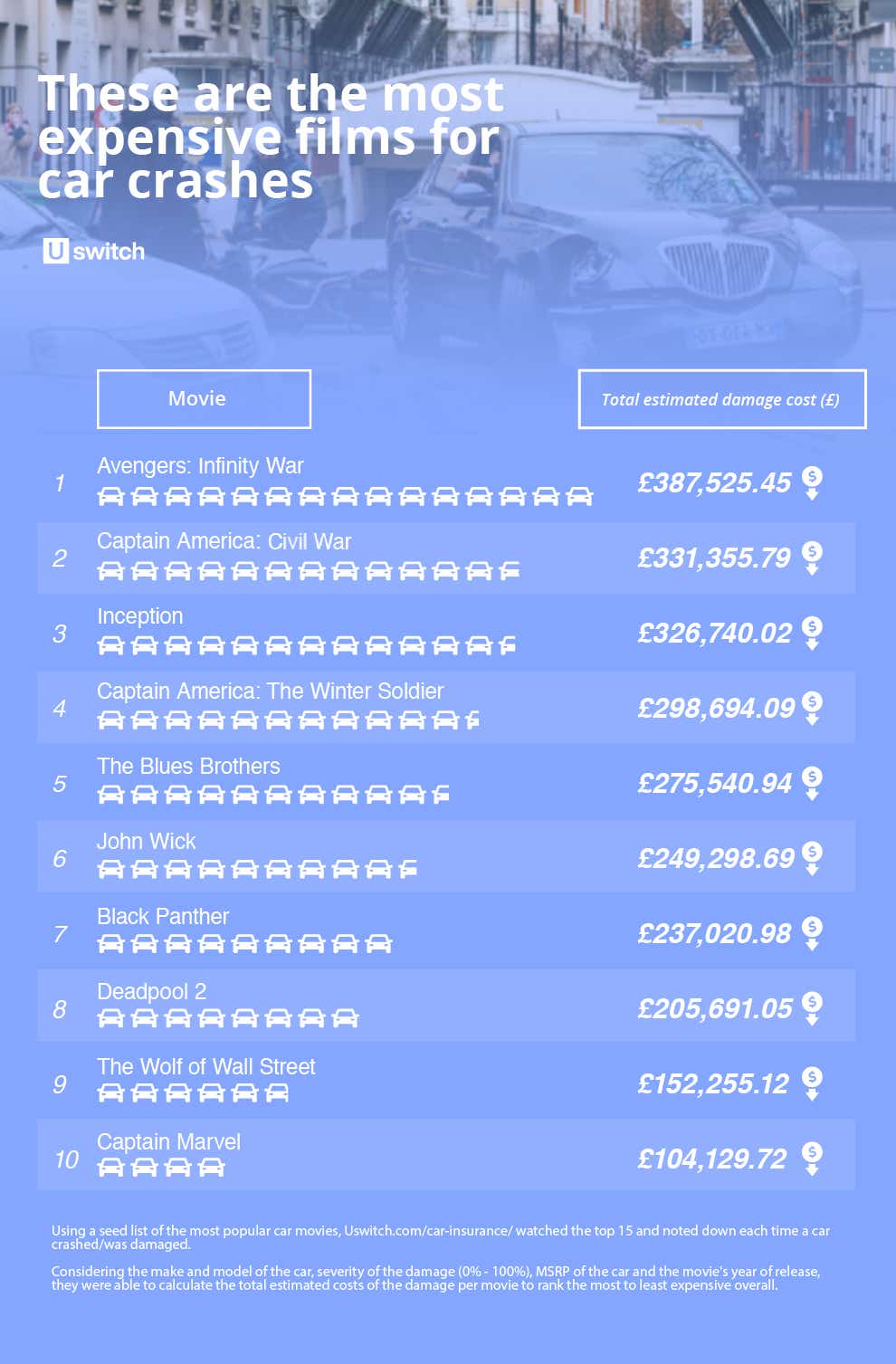 Avengers: Infinity War was found to be the film with the highest estimated car damage costs overall, with an estimated £387,525 worth of damage caused to cars during the two hour, 40-minute Marvel smash-hit.

Throughout the movie, fans watch motors depreciate dramatically, as they are split in half, go up in flames, thrown or crushed, with a total of 19 in-movie cars written off. Of these, the vehicles suffering from the worst crash severity include a 2004 Volkswagen Jetta A4 which was blown up, and a Ford Crown Victoria which was split in half - both of which had a crash severity grade of 100%.

Also part of the Marvel Cinematic Universe, Captain America: Civil War ranked as the second most costly film when it came to estimated car damage costs. Estimated to result in £56,170 less in car damage costs than Infinity War, the 2016 action-adventure film was estimated to rack up £331,355 worth of car damage, with seven cars written off in the process.

A 2010 sci-fi action hit, Inception was revealed to be the third most expensive film studied when it came down to estimated car damage costs. Not only is it estimated that Inception had a staggering 26 on-screen cars written off, but within the plot’s corporate espionage and dream-sharing tech led to an estimated £326,740 worth of vehicle damage.

Once again showing Marvel’s expensive habit of trashing cars, Captain America: The Winter Soldier ranked as the fourth most expensive film when it came down to the amount of estimated car damage costs. We estimate that 14 cars in the movie were written off in the two hour, 16-minute plot. In fact, overall, we estimate that the film’s total car damage could have cost around £298,694.

The top 10 films with the highest estimated car damage costs: 5 The Blues Brothers.

Despite dating back to 1980, The Blues Brothers had the fifth highest estimated car damage costs, at £275,540 (taking into account inflation). Throughout the cinematic piece, 28 in-movie cars were written off - the highest of the top 10 films studied.

In fact, The Blues Brothers is largely renowned for its vehicular carnage, with the starring duo often racing from place-to-place attempting to avoid law enforcement and destroying their cars in the process.

Estimated to have racked up in-movie car damage costs of £249,298, action-thriller John Wick placed as the sixth most costly movie when it came to car-carnage costs. The plot follows an ex-hitman who ends his retirement to seek revenge against the gangsters who tore his life apart, and sees 10 vehicles written off in the process.

Faced with bullets, bridge falls and explosions, the on-screen cars in John Wick faced a great deal of misfortune, with vehicles such as the Chevrolet Tahoe, Ford Explorer, Chevrolet Chevelle, and Mercedes Benz E-Class all finding themselves wrapped up in the dramatic plot.

Representing the MCU once again, Black Panther placed as the seventh most costly film when it came to estimated car damage costs on-screen. The movie – which follows King T’Challa, leader of the isolated but technologically advanced African nation of Wakanda – sees eight in-film vehicles written off, running up an estimated total damage cost of £237,020.

Following on from the 2016’s Deadpool, its sequel Deadpool 2 follows the titular antihero as he seeks to assemble a team to defend a young mutant from a dangerous cyborg. In doing so, the film sees numerous vehicles overturned and squashed, with four written off and an estimated total damage cost of £205,691.

Despite writing off just one on-screen car, Oscar-nominee The Wolf of Wall Street was found to have the ninth highest estimated car damage costs of all of the films studied, estimated to cost around £152,255.

One of the most famous car crash scenes in the movie involves Leonardo Dicaprio’s intoxicated stockbroker driving an authentic Lamborghini Countach to and from his local country club, destroying it in the process. This scene is one of the most famous in the film, as is a nod to a true event in the life of former stockbroker and convicted felon Jordan Belfort.

2019 blockbuster Captain Marvel shines a light on a previously unseen period of Marvel Cinematic Universe, the 1990s. It follows Carol Danvers as she becomes one of the universe’s most powerful superheroes. However, it is also a movie that portrays plenty of costly vehicle damage, resulting in the film having the tenth highest estimated on-screen car damage cost of those studied.

According to our research, the movie’s car damage, including three car write-offs, is estimated to cost £104,129 overall. These vehicles include a 1994 Ford Escort, a 1990 GMC Sierra, and a 1994 Mercedes-Benz E-Class.

2. From this list, the top 15 movies were then selected and studied based on the number of times they appeared on the list and their popularity.

3. Using a car crash severity guide, each vehicle featured in a car crash was assigned a severity percentage which was used as a proxy for the relative depreciation in the car’s value as a result of the damage incurred from the crash.

4. IMCDb was used to cross-reference each car’s make, model and year for each movie.

5. To price the cars featured in the crash scenes, Uswitch found the manufacturer suggested retail price (MSRP) for each car from various sources including autotrader.com and autoblog.com. The MSRP’s collected were then adjusted for inflation using the US CPI.

6. To assign a monetary value to the depreciation in value of each car, we multiplied the severity rate by the inflation adjusted MSRP.

7. The movies were then ranked by the minimum inflation-adjusted estimated damage cost.

8. Cars are categorised as write-offs if the cost of repair is greater than the car’s value. When finding the number of in movie cars written off, this was assumed as any car suffering damage above 20% severity.