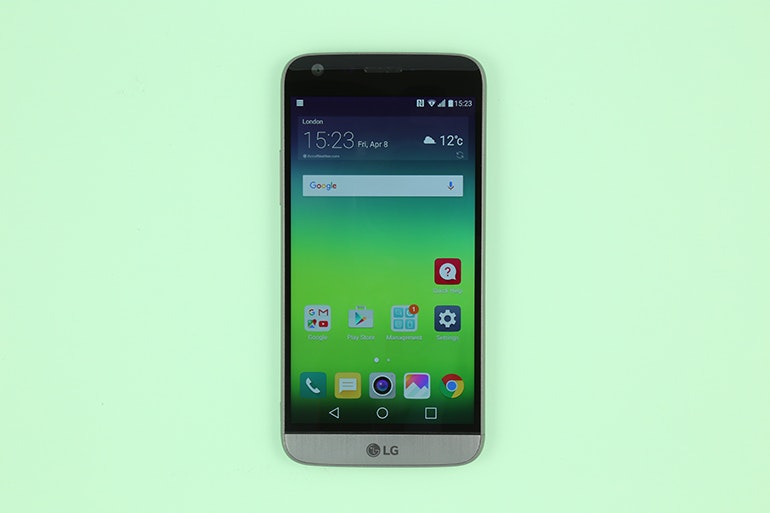 The LG G5 is the first mainstream 'modular' phone. Modular means that you can plug in accessories ('modules') from the LG Friends range, such as a more powerful battery, a 360-degree camera, VR glasses and B&O speakers.

The result is that you can choose to boost the G5's battery longevity or massively expand its camera capabilities. Or even use it as a radio control for the Rolling Bot robot.

The G5 also stands out for its metal body that’s a very welcome departure from the plastic construction of the G4 and G3.

You may have read in some places that the G5's inner metal frame is covered by a plastic coating. That's not the case. In fact, it's merely a layer of paint.

So why's the paint there? Winningly, LG has managed to hide the phone's aerial inbetween the metal layer and paint layer. The result is there's no sign of those unsightly antenna bands that you find on the back of recent iPhones.

The paint layer also helps insulate the handset and means it won't get cold to the touch when the weather takes a turn for the worse. 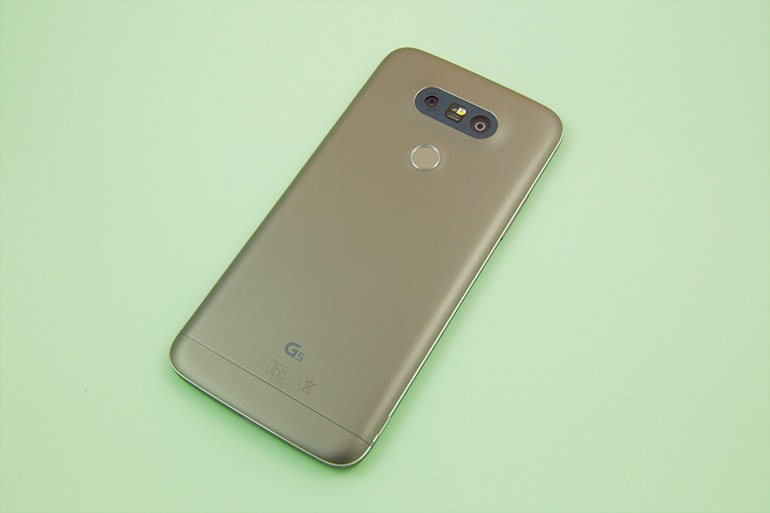 LG's range of modular add-ons are inserted into the G5 via a removable section of the phone that's below the screen.

You might assume this would mean it's less robust than you'd like. But it really doesn't. And that's down to the aforementioned metal frame that means the G5 still feels like a very hard-wearing, solid handset.

As with the G3 and G4, the G5 has very few buttons. And also in common with those phones, the power on/standby button is once again postioned at the rear. The only difference is that the button now features the same fast fingerprint scanner as the Nexus 5X, so you can unlock your phone quicker.

It's a logical decision to locate those features together at the rear and makes it much easier to wake up and unlock your phone. We just wish other phone-makers would follow suit. 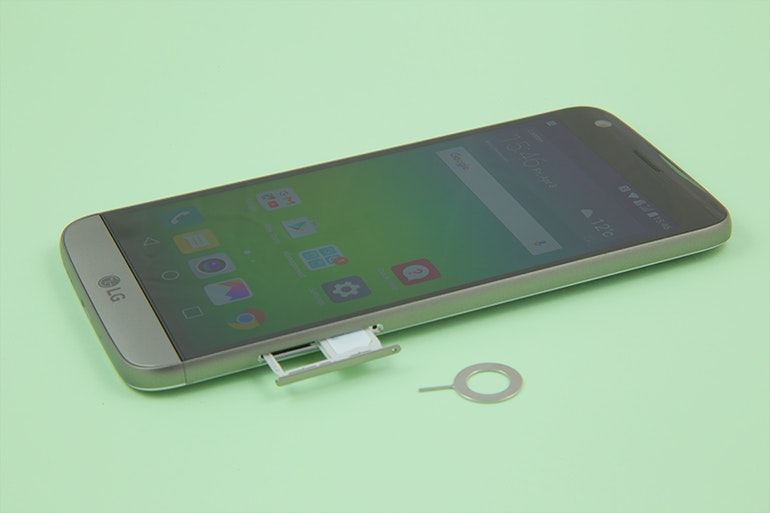 The G5's display looks great, with natural colours that feel and look like those you see in everyday life. That's in stark contrast to the Samsung Galaxy S7's camera's unrealistically bright colour reproduction.

There's also an 'always-on' display mode, which at all times shows you the time and date and other useful information. That means you don't have to keep waking up your phone and, in turn, means your battery lasts longer.

The Quad HD display has been reduced in size from 5.5-inches on the G4 to a more modest 5.3-inches. This is mostly likely to accommodate the removable modular base of the phone.

Our only bugbear with the display is that top, rounded section reflects light, which can be distracting. That really becomes evident if you have bright lights behind you on your daily commute, but you can easily solve the problem by tilting the phone. 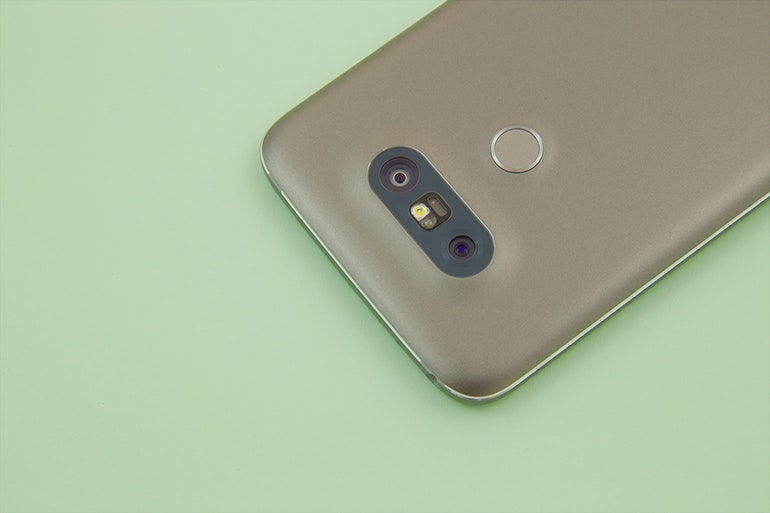 The G5 has not one, but two cameras on the rear: a 16-megapixel, 78-degree snapper and a secondary eight-megapixel, 135-degree camera.

This set-up allows you to take wide-angle shots, with panoramas that are 15-degrees wider than the human eye can see. The results are great, with an impressive, almost-cinematic sweep.

The cameras focus really fast and take great pictures with realistic colour reproduction. They're capable of 4K video recording too, which is four times the resolution of standard HD. But you'll need a 4K TV to really notice the difference. 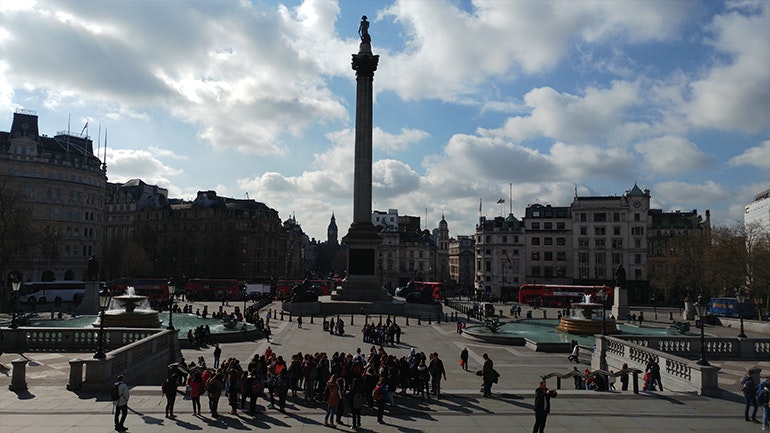 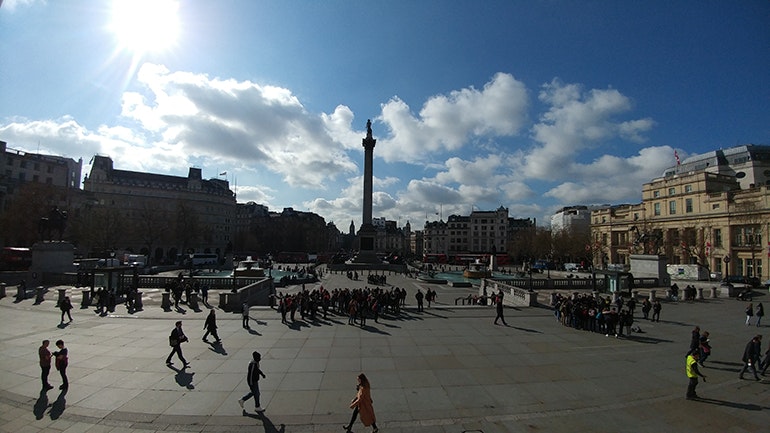 There are a range of modes to take advantage of the twin lenses. Depending on your preference, these show you both images at once. Or you can see images from all three of the phone's cameras by bringing in the front-facing camera too.

The easy-to-add Cam Plus module bring more features to the camera, with a dedicated button for taking photos and a dial for zooming in. It also boosts battery power to a huge 4,000mAh.

But even without that neat add-on, for us the G5's camera is the best around. 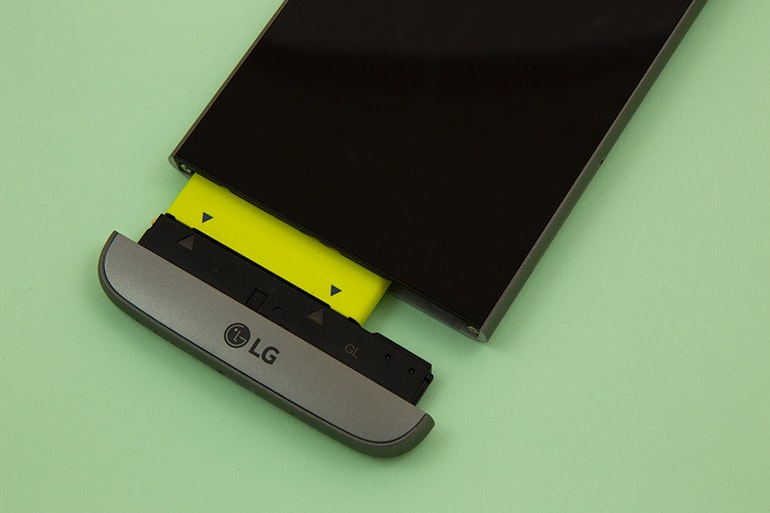 The G5 loads and runs apps quickly and smoothly. That's thanks to the powerful Qualcomm Snapdragon 820 processor, and the fact that it features the latest Marshmallow version of the Android operating system.

The 2,800mAh battery is a little on the small-side compared to other flagship phones. But, for all that, we couldn't fault its performance for day-to-day use.

We got through the working day without needing to recharge until late at night. And when we did run low on power, the fast-charge Quick Charge 3.0 mode came to the rescue and restored power to beyond 50 per cent in less than 30 minutes.

Being able to remove the battery is handy too. Not only because it means you can carry around a spare for emergencies. But also because in a year or so, when the battery might not retain power as well as it once did, you can cheaply and easily replace it.

In a departure from many Android phones, the G5 displays all your apps on the homescreen. That's in contrast to Samsung phones, for example, where apps are stored in a secondary screen that's known as an 'app tray'.

It's an approach we've seen before on Huawei and Xiaomi phones and, of course, on iPhones too.

If you're a long-time Android phone user it could take a little getting used to. But it also means that if you're coming from an Apple phone, you'll feel very much at home here.

For your outlay, you're getting twice the internal storage space of the entry-level 16GB iPhone. And, of course, you can expand the G5's 32GB of capacity by up to 2 Terabytes (TB) by adding a microSD card.

By way of reference, 1TB is 1,000GB. That's room for hundreds and thousands of songs. Or to put it another way, more than enough space for anyone.

But as we've intimated, what you're paying for with this phone is innovation and the option to boost its capabilities with the LG Friends Modules. For the first time, this is the chance to have your phone, your way.

With the G5, LG has brought the modular phone out of research labs and into our hands. In so doing, it's given people a fantastic reason to look beyond Samsung and Apple and casts LG as a real innovator in the smartphone market.

But even if the G5 wasn't paired with the LG Friends accessories, it'd still impress us simply for being a great looking, high-performance phone. And for its camera's incredible wide-angle shots.

In a nutshell, the G5 is a worthy update to the LG G3 and G4. And a forward-thinking alternative to the slew of nigh-on identical smartphones from rival phone-makers.

Compare deals for the G5 here