We’re all guilty of splashing the cash from time-to-time, and being able to shop online has made doing so even more tempting. At Uswitch.com, we’ve sought to discover the changing online spending habits of the British public.
Share this guide 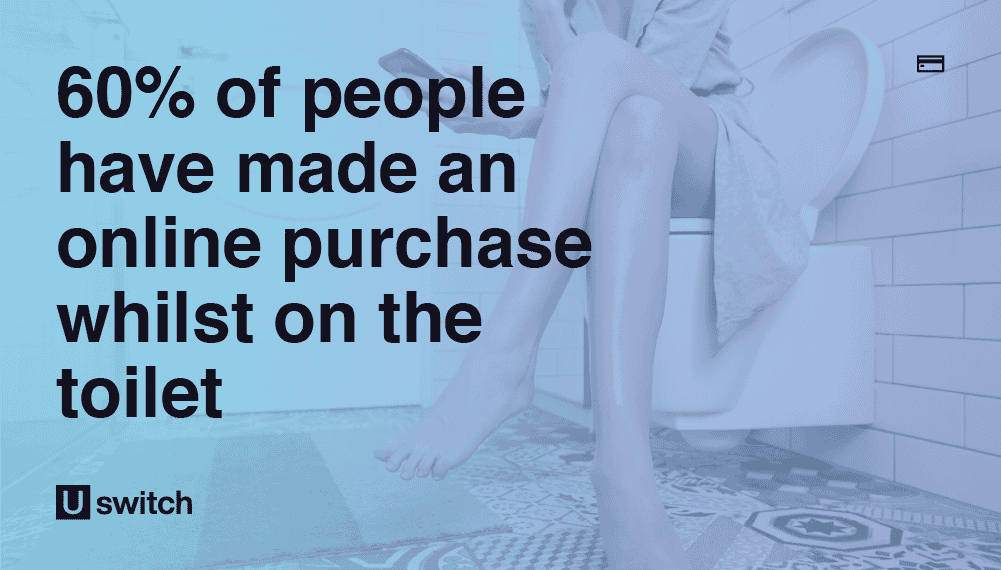 60% of people have made an online purchase on the toilet

There is no denying that Brits love to shop, and online shopping has revolutionised the way we spend our money. In fact, Brits spend three times more when online shopping compared to the global average, with the average person spending a staggering £1,382 per year!

To obtain a clear view of British shopping habits, we surveyed 4,380 people who regularly shop online. We were interested in where they shop, when they shop, the social media platforms influencing their habits, and how their habits have changed now that the high street is rapidly declining. We analysed the responses to find a clear bias for shopping styles and consumer trends.

The most popular locations to shop online

With so many websites saving your payment information and the ease of using smartphone payment apps like Apple Pay or PayPal, it’s becoming quicker and easier for Brits to spend online in an instant. But is there a correlation between where we shop and spend our money the most? 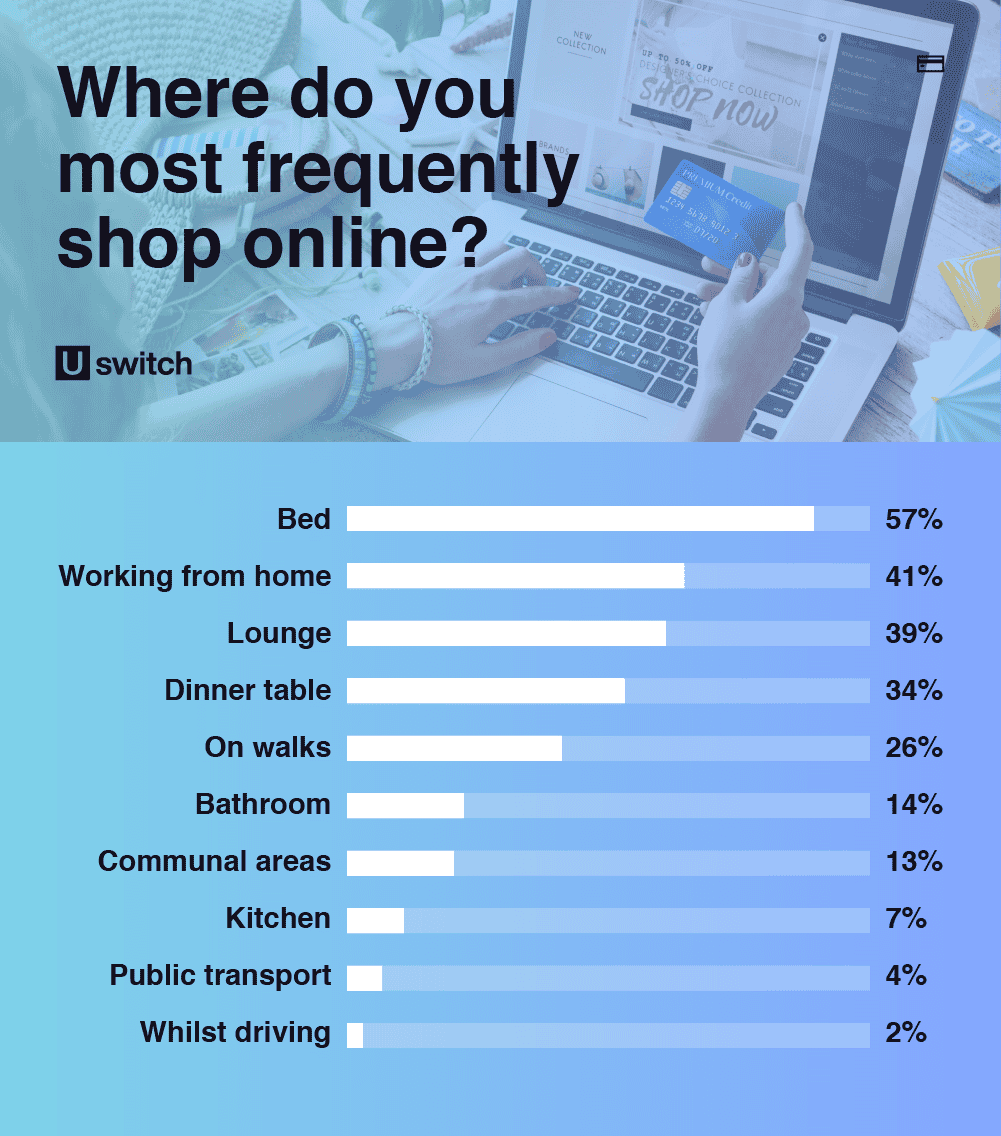 Where do you shop online poll

Our study found that the general public snaps up most of their bargains from the comfort of their own bed. Instead of sleeping, more than half (57%) of Brits lay in bed scrolling and adding items to their basket, before clicking checkout.

Four in 10 (41%) ditch the ‘work’ part of working from home and use their office hours to do a spot of online shopping, whilst 39% prefer to recline on the sofa in their lounge and spend their money.

Shockingly, 2% of respondents said they most frequently shop online whilst driving – as a passenger one would hope!

60% of people have made an online purchase on the toilet

Although uncommon, our survey revealed that 3% of respondents have made a purchase whilst in the shower, 9% have done so while working out at the gym, and 2% have even confessed to browsing online whilst having sex!

The most popular time of the month to spend online

To investigate when people are most likely to buy online, we asked respondents “when in the month do you make the most purchases?”. From this, we could identify the most popular time of the month Brits spend their hard-earned cash. 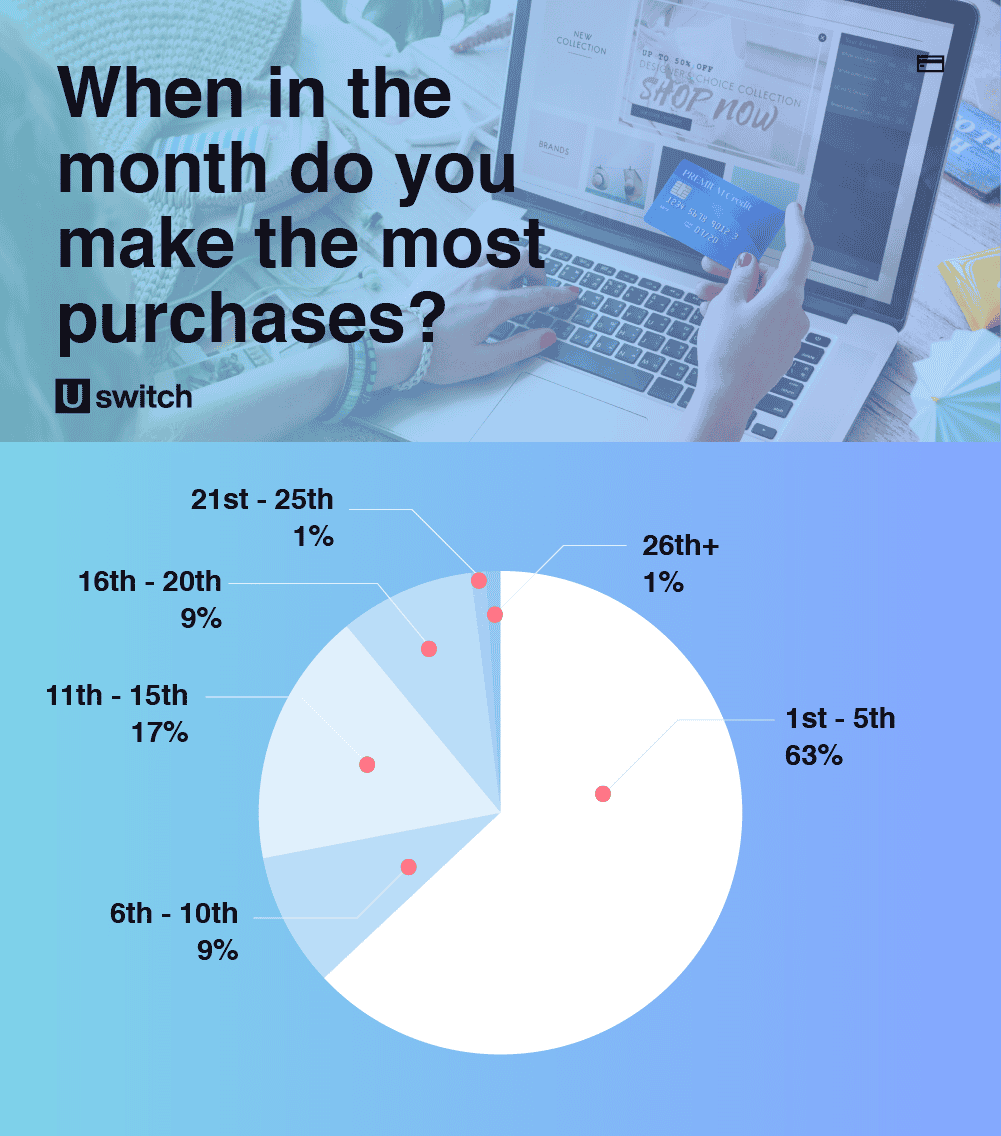 When in the month do you make the most purchases poll

Our results show that there is a clear correlation between when we shop and payday. On average, spending is most common between the 1st and 5th of the month, as just under two-thirds (63%) of Brits admit that this is when they make the most purchases.

Almost 2 in 10 (17%) are guilty of splashing the cash mid-month, however, it seems Brits avoid online shopping from the 21st onwards, as only 1% make the most purchases during this period.

Our survey found that remorse starts to set in as we get further away from payday, with eight in 10 (79%) Brits admitting that they often regret their spending habits and impulse buys by the end of the month, with many being left cash-strapped and longing for payday. 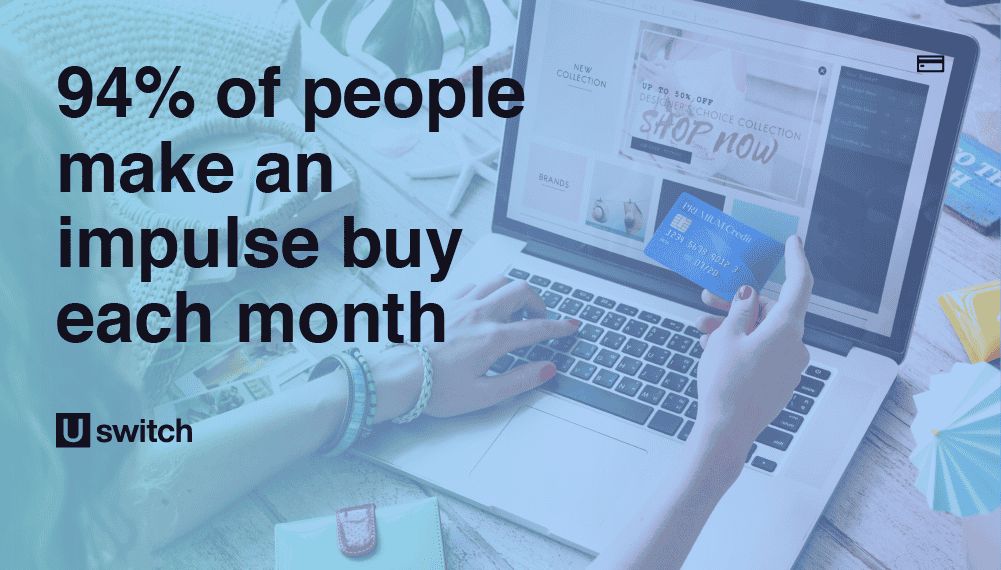 94% of people make an impulse buy each month

Impulse buys are a growing concern, after our survey found that a staggering 94% saying they make at least one compulsive purchase every month. In fact, we found that Brits spend an average of £102 on impulse buys each month, with one in 10 (23%) admitting to spending over £500 on one item a year!

These expensive buys mean that 65% of respondents have previously hidden a purchase from family members and friends, with Brits confessing to keeping their partners in the dark the most (78%), followed by:

When quizzed about why they chose to keep their purchases hidden, reasons range from being embarrassed about the item(s), buying the item(s) as a gift, or because they have already bought too much online.

There are more than 53 million active social media users in the UK and many online retailers take advantage of this by spending more than £3.6 billion on social media advertising to entice users to buy from their websites. But which platform influences Brits the most? 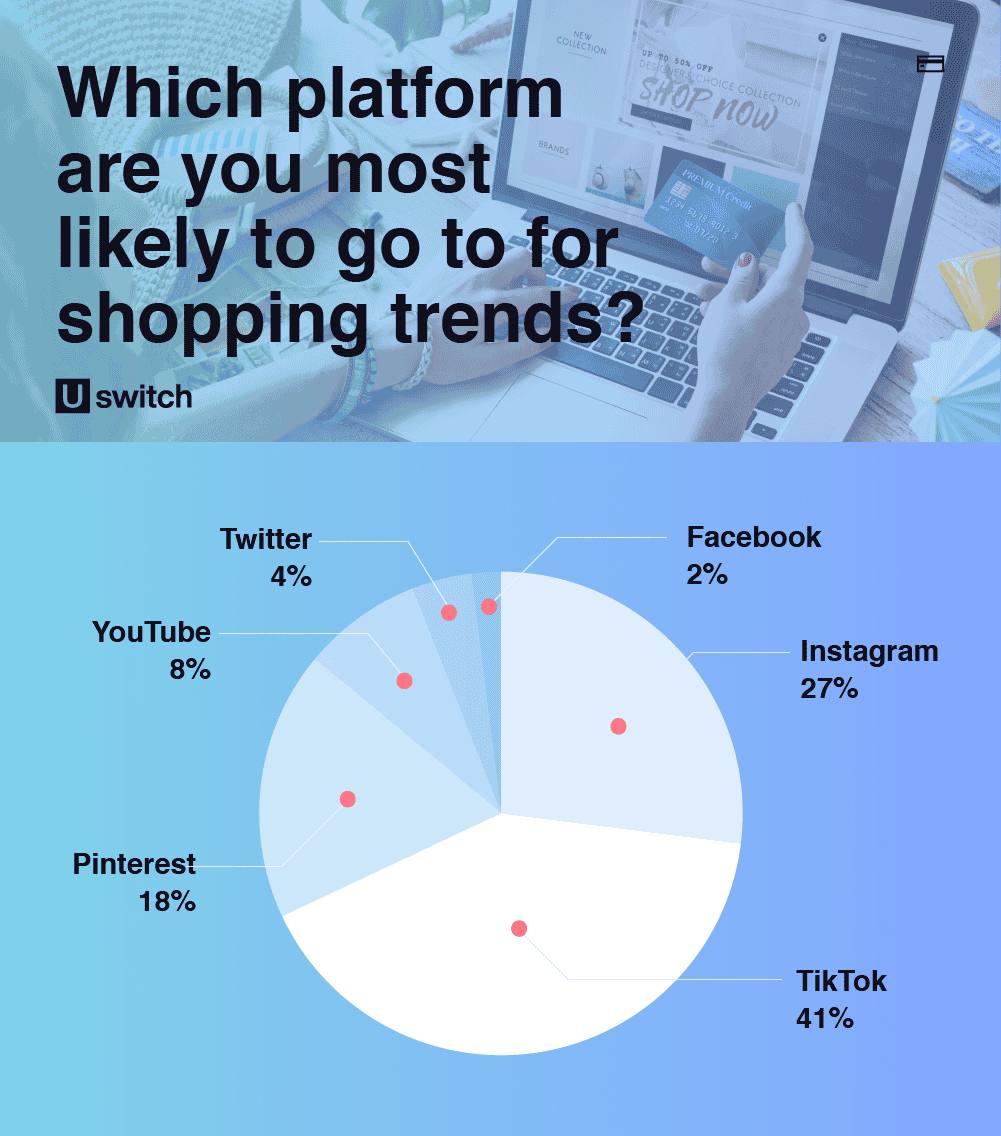 Despite being a relatively new social media platform, TikTok has changed the game. Four in 10 (41%) Brits use the app to look for the latest shopping trends, and more than one-third (37%) take inspiration from the influencers on the app.

Instagram is in second place, as just over a quarter (27%) of those surveyed said they are most likely to use this social media platform to find the latest shopping trends. With over 30 million users, it’s no wonder it’s a constant source of shopping inspiration and a drain on our bank accounts.

However, once a key player when it comes to social media influence, Facebook is the last platform Brits turn to when searching for the latest trends and being influenced by brands (2%).

If money was no object…

If money was no object and Brits were free to buy whatever they wanted, what would be their number one choice? We asked the million-pound question to find out and found that the number one pick would be a sports car. Other top purchases include an all-expenses-paid holiday was also yearned for, as well as buying a private yacht.

The top five responses are as follows:

The rise of small businesses online

With the high street being hit by our preference for online shopping and many well-known retailers opting to trade solely on the web, small businesses have had to work hard to compete with leading sites like Amazon or ASOS.

However, the 5.9 million small businesses trading in the UK need not worry as our study found that almost half (45%) of Brits are ‘very likely’ to shop from small businesses. A further one third (36%) said if, given the option, they are ‘likely’ to choose to spend their money on products made by small business owners rather than established brands. 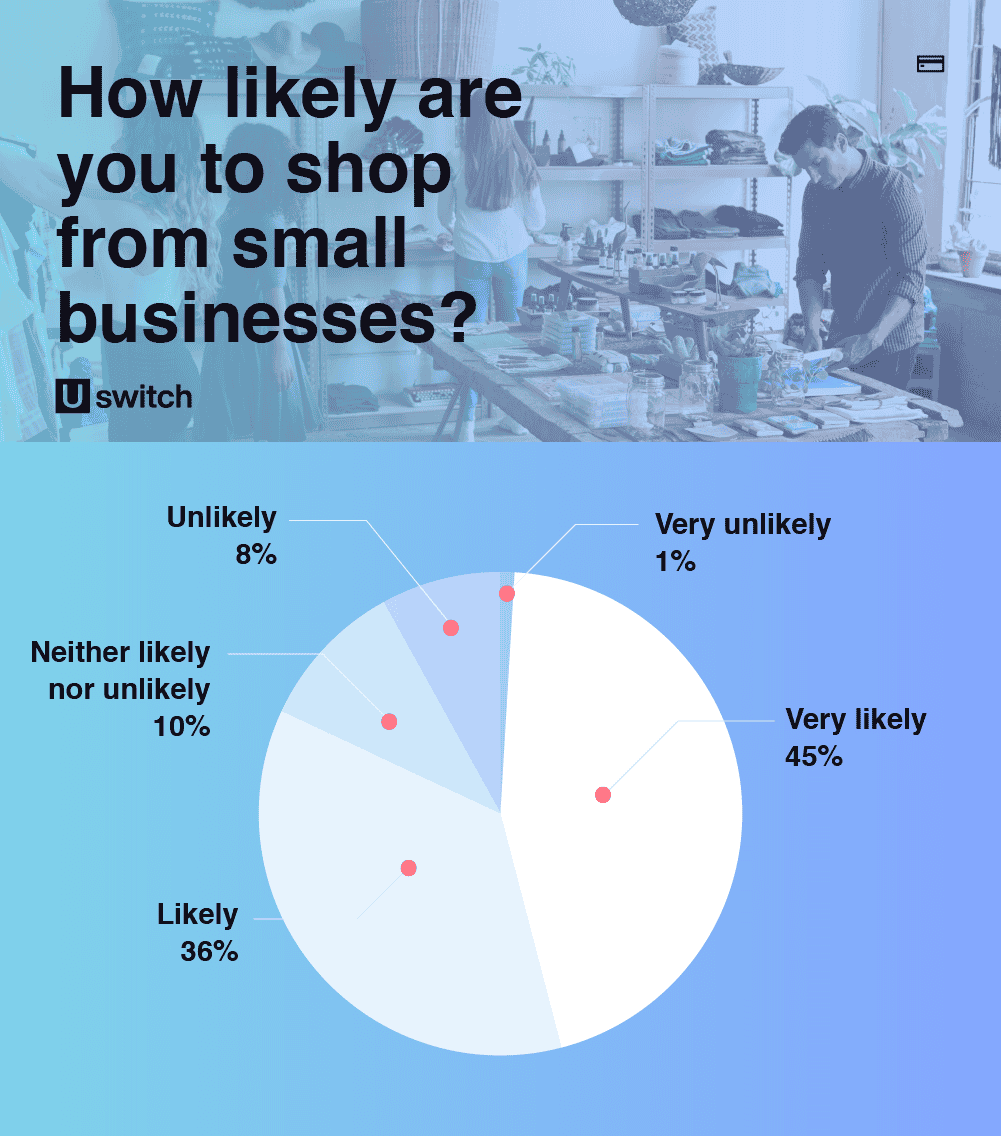 How likely are you to shop from small businesses poll

Furthermore, more than two thirds (68%) of Brits admitted that they often go out of their way to shop from smaller businesses, and six in 10 (61%) would even pay more for a product to support a small business, rather than trying to find a cheaper alternative from a bigger brand. 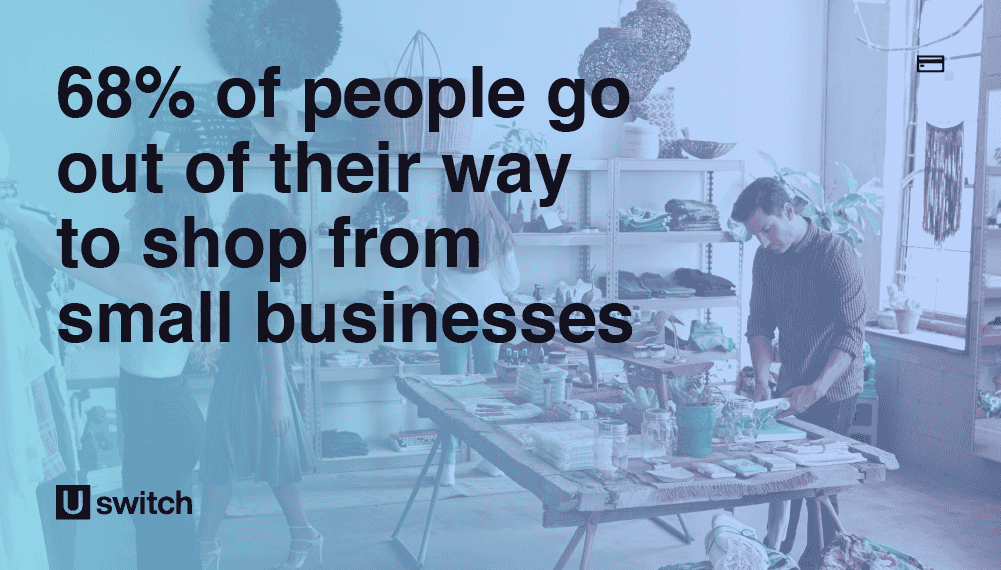 Uswitch.com surveyed 4,380 people who frequently shop online throughout March 2021, asking a series of questions on where they shop, how their shopping habits have changed, and their preferences for online shopping.