Video games are a multi-billion dollar industry, as we recently saw with the news that Microsoft is set to buy game company Activision Blizzard for an incredible $68.7bn. Plus, in the last couple of years as people spent much more time at home, gaming’s popularity only increased to new heights.
Share this guide

With many finding themselves with much more time on their hands at home and looking for new ways to connect with friends, it’s never been more important to have a good broadband connection to enjoy the latest blockbuster releases.

So if you’re looking to optimise your gaming experience and change broadband supplier then be sure to check out the best broadband deals to ensure you get the best package for your gaming needs!

2021 was another huge year for the industry, with new instalments in major franchises such as Far Cry, Halo, Resident Evil, and Forza.

But which were the biggest and best games of the year? Uswitch has explored the data to find out the answers to these questions, and much more.

The most popular video games around the world 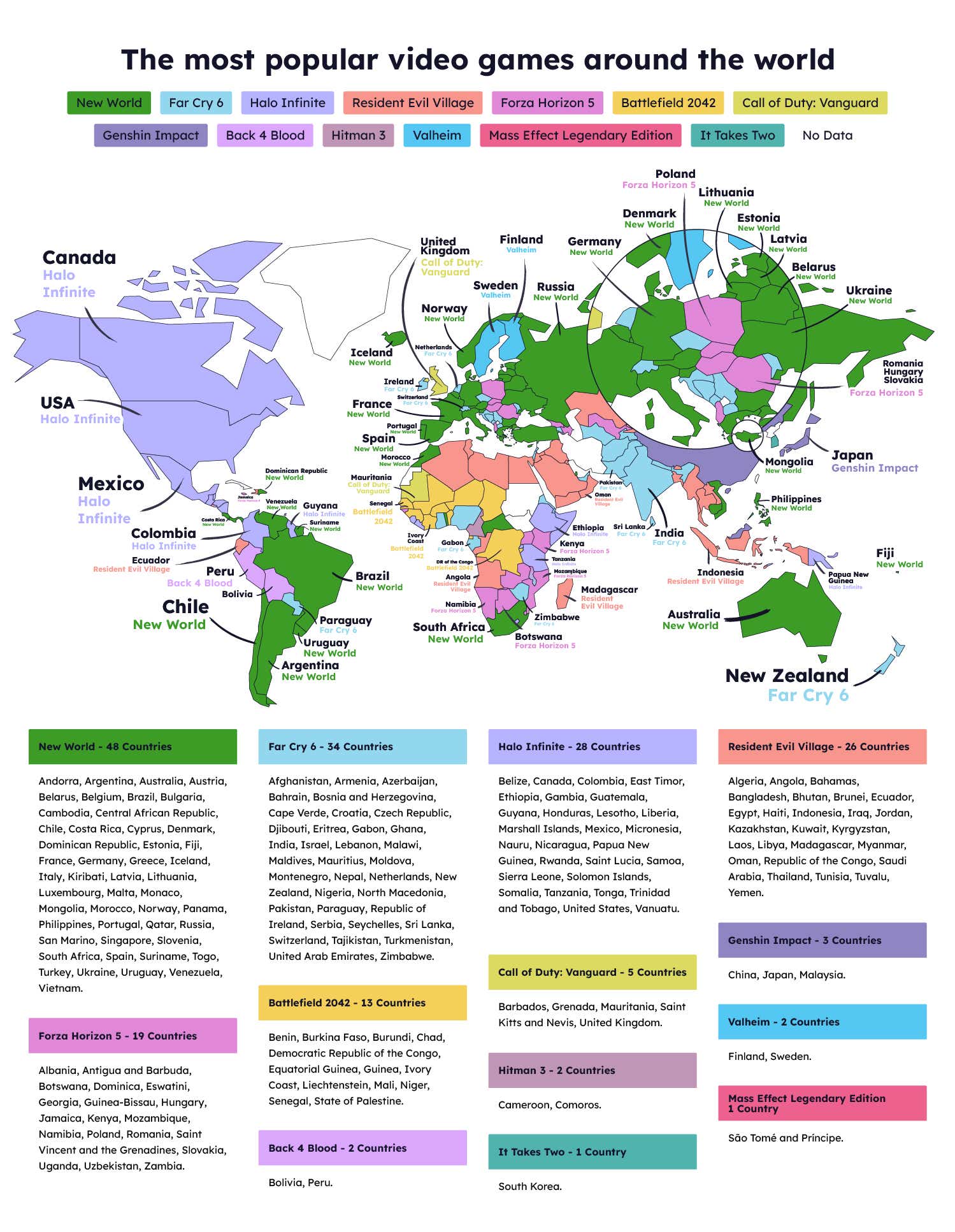 New World - the most popular game in 48 countries

The game that was favoured in most countries was New World, which was the most popular game in 48 different nations, including Germany, France, Spain, Australia and Brazil. New World is an open-world MMO game where players colonise a fictional land based on the Americas and is developed by Amazon.

Far Cry 6 - the most popular game in 34 countries

The latest instalment of the Far Cry series was one of the biggest releases of the year, and the game proved to be the most popular in 34 different countries such as India, the Netherlands, the Czech Republic and New Zealand. In Far Cry 6, your mission is to topple the regime of a dictator played by Breaking Bad’s Giancarlo Esposito.

Halo Infinite - the most popular game in 28 countries

It’s been six years since the release of the last Halo game, so it’s no surprise that Halo Infinite has proved hugely popular and was the most loved game in 28 countries, particularly in North and Central America. Unlike previous Halo games, the multiplayer section of Infinite is free-to-play.

Other games that proved popular in other parts of the world include Battlefield 2042 (predominantly favoured in African countries), Genshin Impact (which was most-searched in East Asia), and Valheim (a Viking themed game that was fittingly the most popular game in Scandinavian countries Sweden & Finland).

The most awarded video games of all time

There are now more video game awards than ever before, with hundreds of ‘Game of the Year’ prizes being given out each year.

But which games are the most decorated of all time? Looking overall, the game that has received the most awards is The Last of Us Part II, with 317 awards, however, due to the fact that so many more awards are given out these days (362 in 2021 compared to 40 in 2003) here’s a look at which games have won the most as a percentage of the total number of awards that were up for grabs that year. 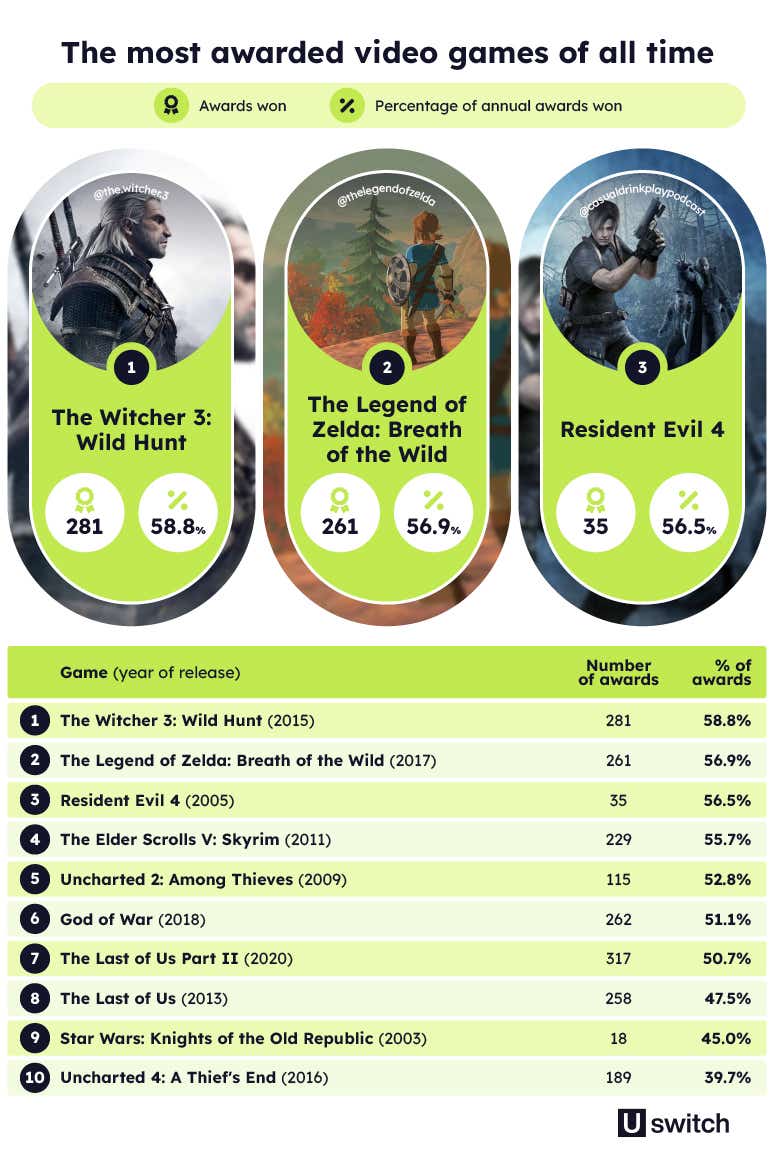 The most successful game when it comes to industry awards is 2015’s The Witcher 3: Wild Hunt, which won 58.8% of the awards given out in that year.

The game has often been cited as one of the best ever made, receiving acclaim for its gameplay, narrative, world design, combat and visuals. Plus, it recently found new fans after the fantasy novels on which it is based were adapted into a Netflix series.

Another game that won over half of the awards on offer in its release year was The Legend of Zelda: Breath of the Wild in 2017. The Nintendo Switch game was hailed as a landmark moment for open-world game design and was a huge hit at award ceremonies. It also holds the honour of being one of the best-selling games of all time, having sold around 26 million copies by 2021.

While Resident Evil 4 only received 35 awards when it was released back in 2005, that still represents 56.5% of the awards that it was eligible for, making it the third-most critically successful game of all time.

The game was praised for things such as its story, gameplay, graphics, and voice acting and it had a big influence on the genres of both survival horror and third-person games.

The best-reviewed video games of all time (by critics)

From first-person shooters such as Call of Duty to family-friendly classics such as Mario and Sonic and everything in between, there have been hundreds of great games released over the years, but which do critics deem to be the very best of the best?

These are the currently highest-rated games on Metacritic, which aggregates review scores from a number of industry publications. 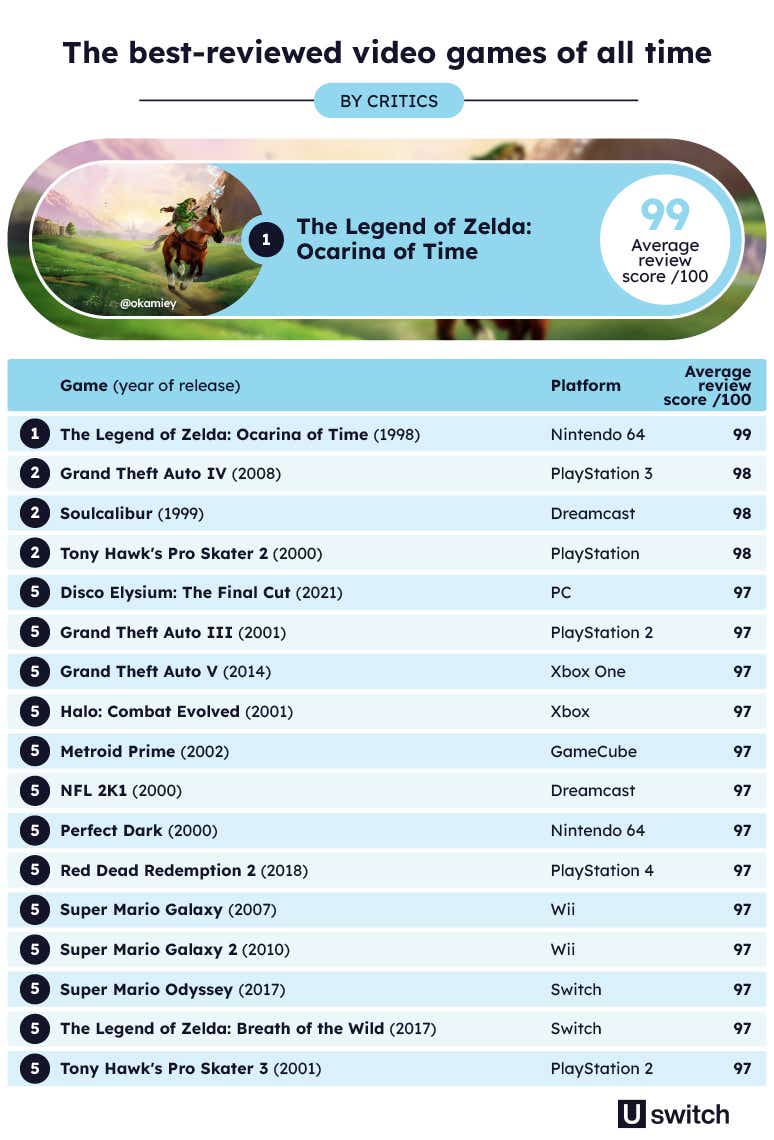 While no game is yet to score a perfect 100, one game comes pretty close, The Legend of Zelda: Ocarina of Time.

Released over 20 years ago, Ocarina of Time remains a true classic and redefined the action/adventure genre with its gameplay features such as a target lock system and context-sensitive buttons, which are commonplace in games now but were revolutionary back in 1998.

The worst-reviewed video games of all time (by critics)

However, not all games have been as universally lauded, with some being panned by critics. While video game studios have come on leaps and bounds, there is still the odd flop here and there — as we can see with the following ranking. 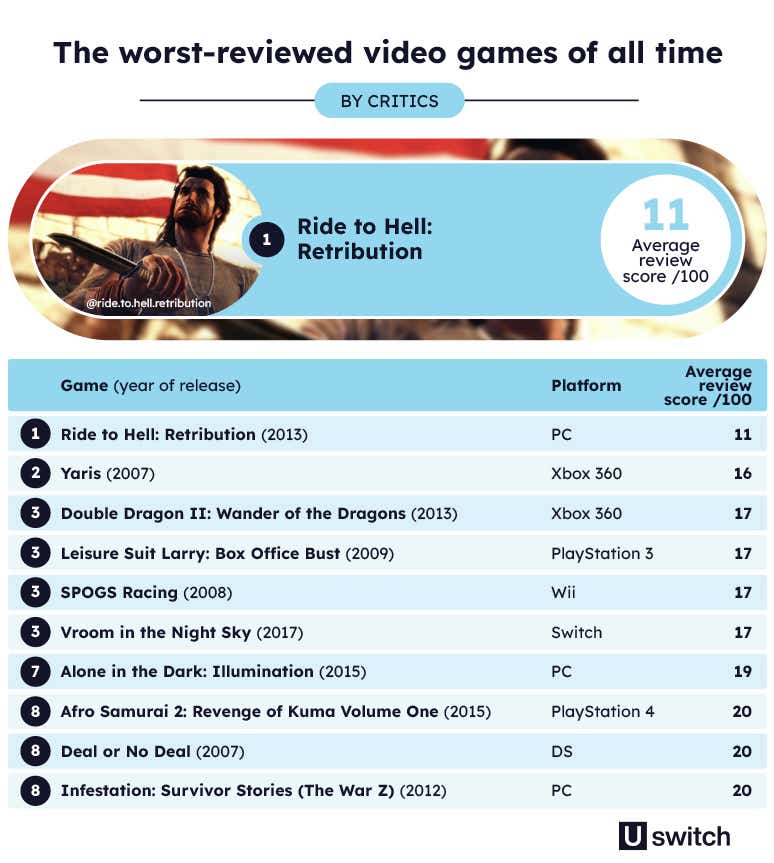 The overall most hated game is Madden NFL 21, the latest instalment in the popular American football series. The game was subject to ‘review bombing’, where a large number of people leave negative reviews on a game after fans were unhappy with having to pay $60 for a game that reportedly offered little-to-no changes to the previous edition.

The best-reviewed video games of all time (by gamers)

However, while the opinions of critics and reviewers are important, they don’t tell the whole story. So here’s a look at some of the best games of all time in the view of gamers, through average user reviews. 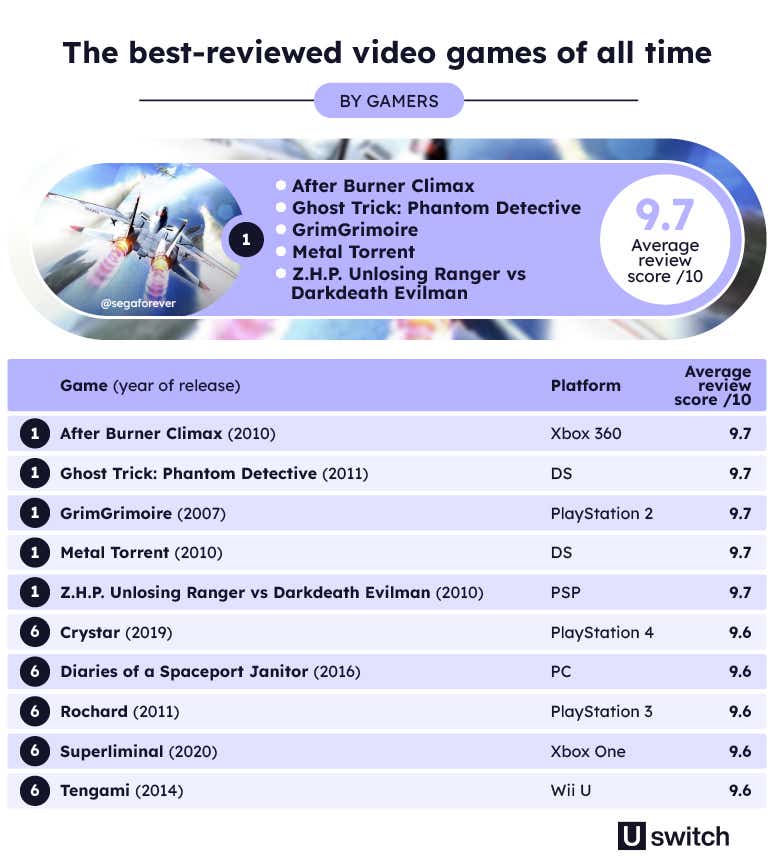 The worst-reviewed video games of all time (by gamers)

When it comes to gamers’ least favourite games of all time, the results are all a lot more recent, with each of the top ten worst games being released since 2019. 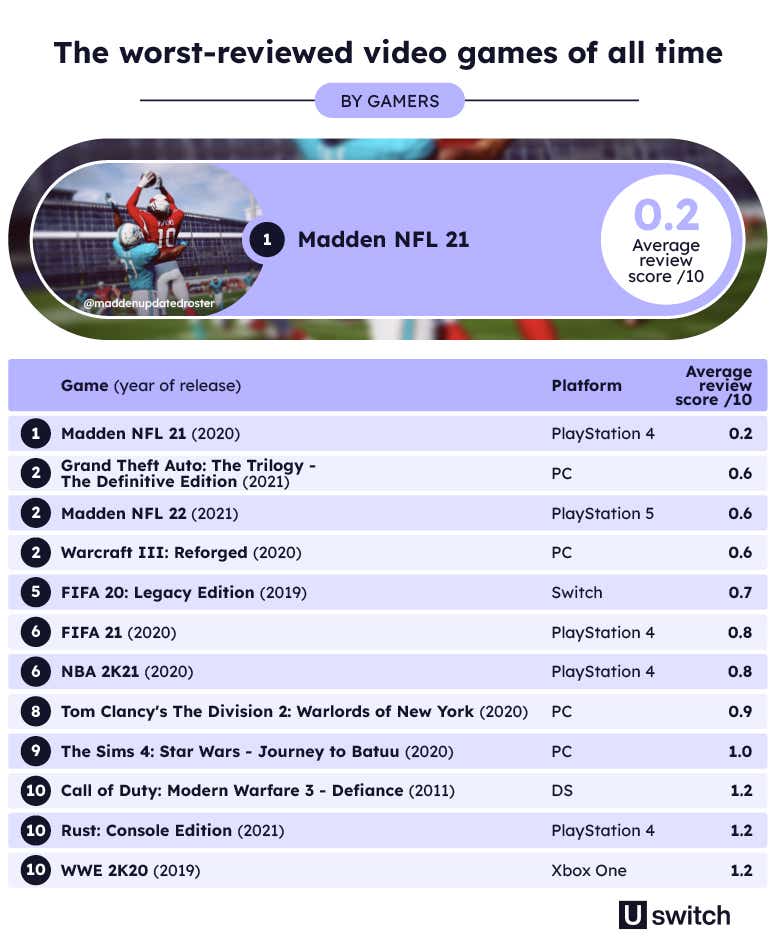 The best-reviewed video games of 2021 (by critics)

Looking specifically at games released last year, the game that was most lauded by reviewers was Disco Elysium: The Final Cut, with a score of 97 out of 100. 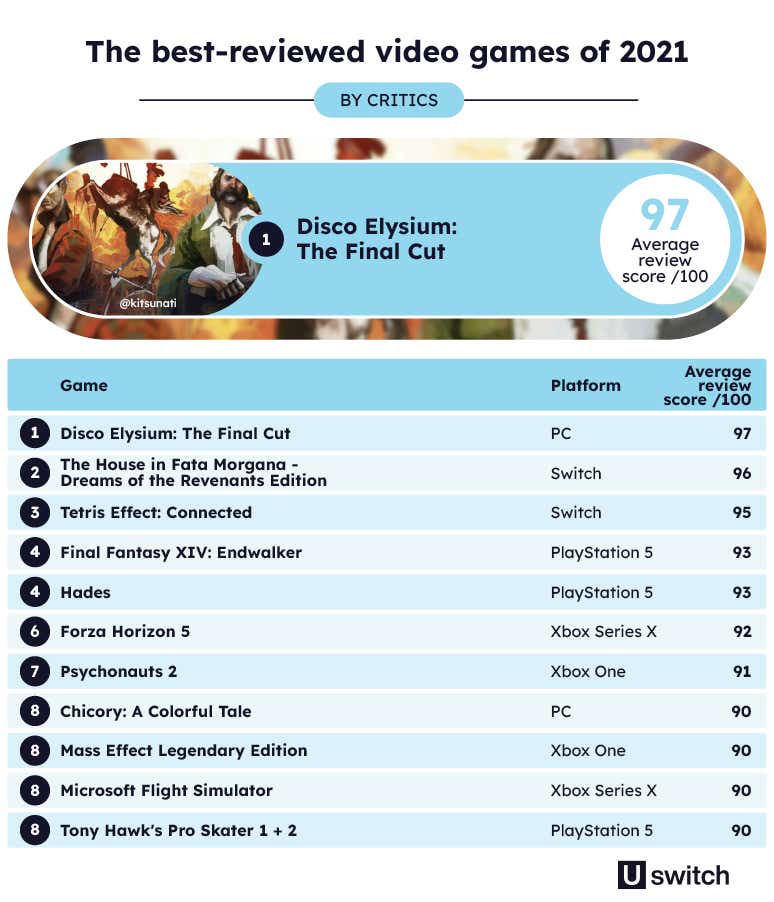 The game was initially released on PC in 2019 and was returned last year on consoles with additions such as full voice acting for over 300 characters, as well as new quests and music, lifting its average review score even higher.

The worst-reviewed video games of 2021 (by critics) 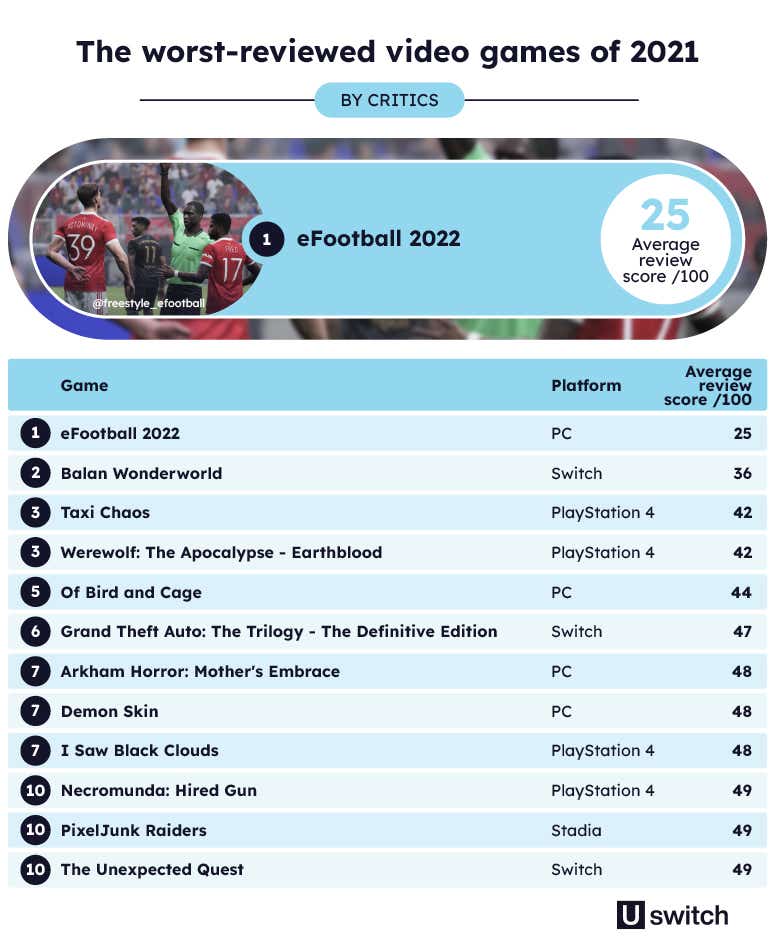 The Pro Evolution Soccer series was once the standard-bearer for football simulation games, but it has long since been overtaken by the FIFA series. Following a rebrand to eFootball, it now holds the title of worst-reviewed game of 2021, being panned for its graphics, controls, and lack of content.

In fact, the game’s poor reception was so bad that makers Konami issued a public apology for its issues and promised to make improvements.

The best-reviewed video games of 2021 (by gamers) 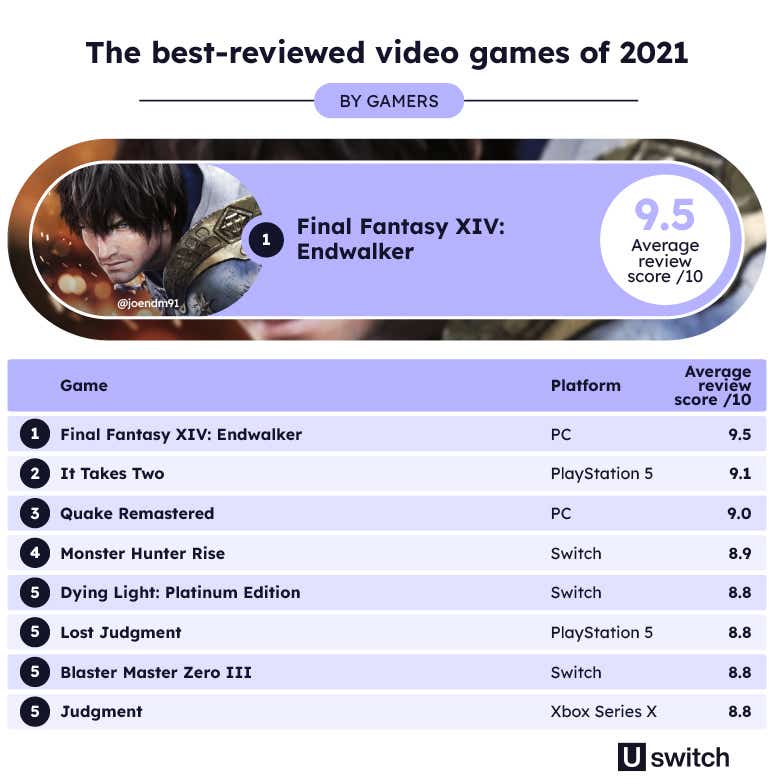 When it comes to user review scores, one game was the clear winner, with an average score of 9.5 out of 10.

Final Fantasy XIV: Endwalker is an expansion pack to the Final Fantasy XIV MMORPG and received widespread acclaim from both the gaming press and fans alike, with praise for its level design and storytelling.

The worst-reviewed video games of 2021 (by gamers) 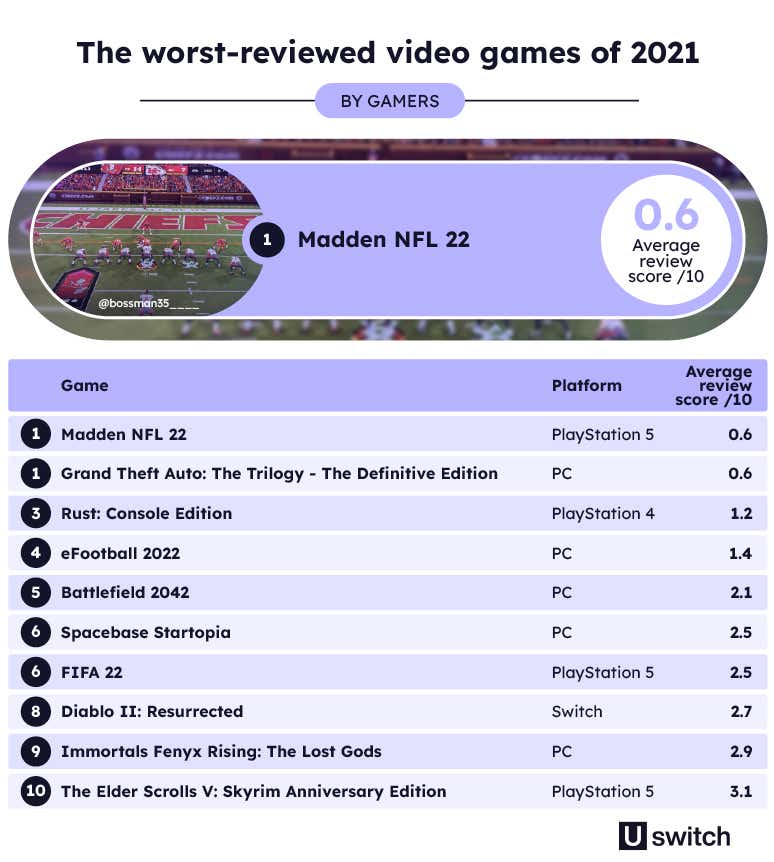 Gamers’ least favourite games of 2021 are also amongst the worst-reviewed of all time, with two games tied as being the worst overall: Madden NFL 22 and Grand Theft Auto: The Trilogy - The Definitive Edition.

It seems that Madden was hated by fans just as it was by critics, but the low score for the remastered versions of the Grand Theft Auto trilogy was much more surprising.

The original games are among the highest-rated of all time, but these remasters were heavily criticised for numerous technical issues and changes to the art direction of the games.

While gaming is generally a relaxing way to zone out for a couple of hours, that isn’t always the case. Some games seemingly pride themselves on providing a real test to the player.

While the number of truly challenging games has decreased over the years, there’s still a lot of gameplay out there that can confuse players. So to find out which are the hardest, here are the games that received the most Google searches for ‘walkthrough’ and ‘tips’ in the last twelve months. 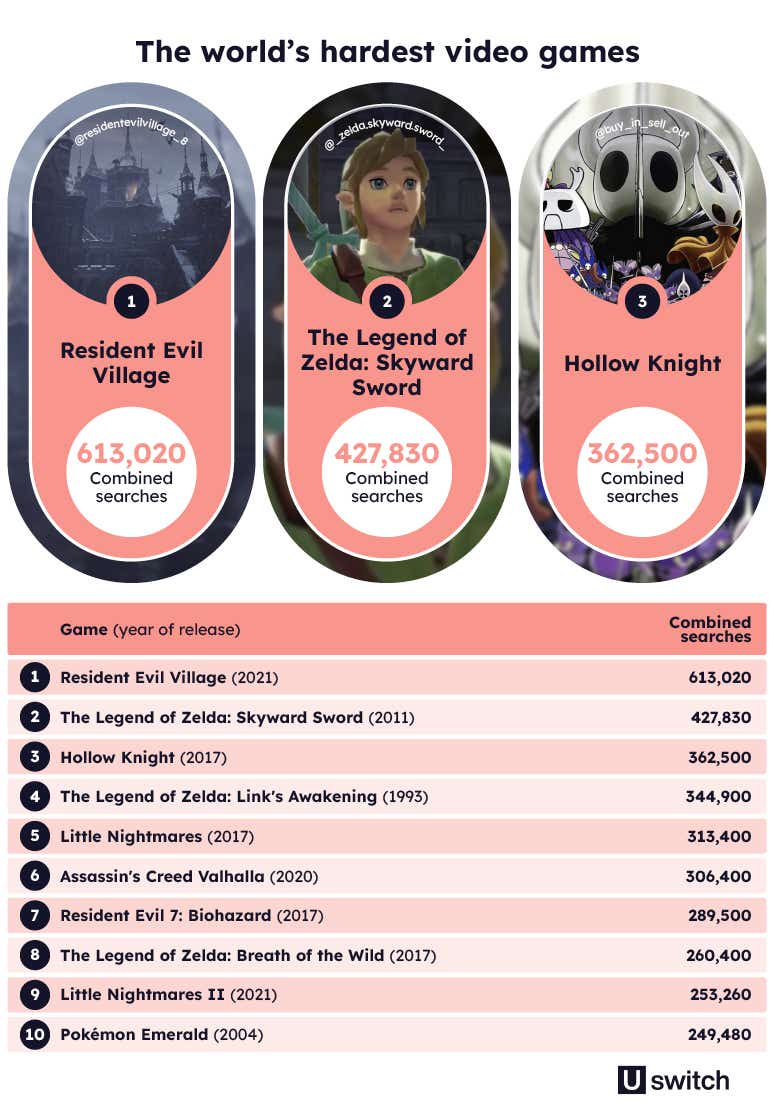 Resident Evil Village was one of the biggest games of 2021, so it stands to reason that so many people have turned to Google for tips on how to advance.

The game has a relatively steep learning curve for players who are new to the series but it gets easier as the player progresses and acquires new weapons and upgrades. It also includes a number of much harder difficulty settings, for those who really want to challenge themselves.

Skyward Sword is another game not particularly known for being difficult, but it clearly has left a few gamers stumped, with over 400,000 searches in 2021 for tips and walkthroughs.

The game was recently re-released on the Nintendo Switch, and while it’s straightforward for the most part, some of the puzzles and boss battles may require a little extra help for beginners.

Hollow Knight is a 2D action-adventure game that borrows from classic titles such as Metroid and Castlevania, and is also a throwback in terms of how difficult it is.

In fact, the game proved so difficult for some reviewers that they even claimed the game was unfairly hard. But on the whole, the game’s difficulty was praised, giving gamers a real sense of accomplishment after overcoming boss battles.

“Video gaming is a multi-billion dollar industry, with millions of games to choose from. For avid gamers across the world, this means that the decision of which games to invest time and money  in is a tough one.

“The research reveals that, despite being the most popular games in the highest number of countries around the world, New World and Far Cry don’t feature in the list of best-reviewed video games for 2021. Disco Elysium: The Final Cut was given the top spot for critic reviews, whilst Final Fantasy XIV: Endwalker took first place amongst gamers.

“In terms of best-reviewed games of all time, the study reveals The Legend of Zelda: Ocarina of Time ranked top with critics, whilst gamers prefer After Burner Climax.”

The most popular video game in every country

Starting with a list of 100+ video games released in 2021, we used Google Ads Keyword Planner to find the total number of Google searches for each game in 2021, in each country for which data is available.

Multiple variations of each keyword such as shortened titles and regional variations were used to ensure that the most-searched variant was being used for each game.

The most awarded video games

To account for the fact that some years have more awards than others, we also showed each game’s awards as a percentage of the total awards that were given out that year.

In instances where there are multiple versions of the same game listed on different platforms, the highest-scoring version was taken.

The games with the highest number of Google searches for the game’s name followed by the terms ‘walkthrough’ and ‘tips’, looking at the total number of global searches in 2021, again sourced using Google Ads Keyword Planner.