With all major networks set to have rolled out 5G by October[1], more than 23 million phone users[2]are still experiencing difficulties connecting to 4G, including more than 5 million[7] struggling every day — according to new research from Uswitch.com, the price comparison and switching service.

A third (33%) of adult smartphone users[8] — 17.1 million people — have trouble connecting to 4G at least once a week, despite telecoms watchdog Ofcom claiming that 67% of the UK has 4G coverage from all major operators[4].

This means that almost a third of the country[2] is frequently forced to rely on a 3G signal — two generations behind the current cutting edge technology.

The launch of 5G looks unlikely to solve the problem, with all 34 locations[1] due to get coverage by the end of 2019 being cities or large urban areas. London and Cardiff will soon be served by four 5G networks, and customers in Bristol, Edinburgh, Birmingham and Manchester will have the choice of three providers.

Only 28% of the country will have 5G by the end of 2019, with 72% of the population left without access to fifth-generation connectivity in the near future[3].

Graphic: Map of 4G and 5G provision in the UK 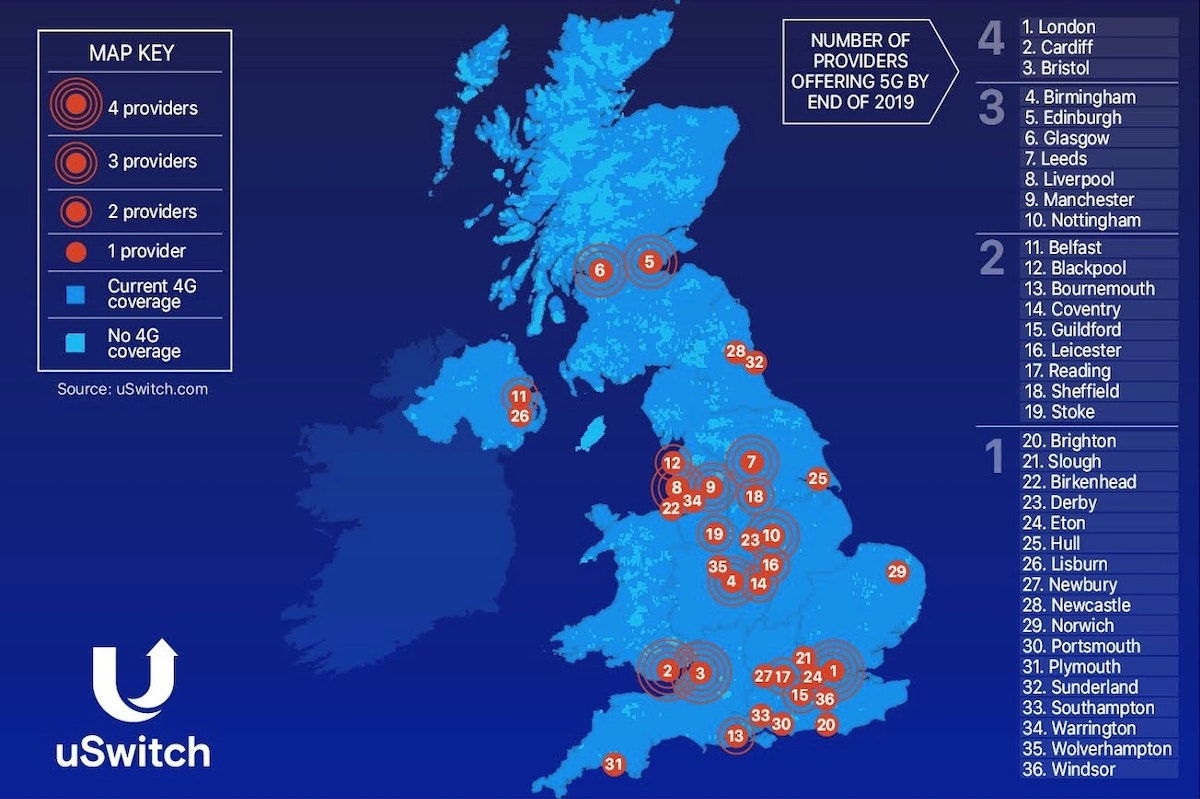 New data from Opensignal and Uswitch reveals that three quarters (75%) of the South West is covered by 4G[9]. Huge swathes of the region will miss out on 5G in the short term as the technology is only due to come to Bristol and Plymouth by the end of 2019[1].

Wales and Scotland are also lagging behind the rest of the country in 4G availability, at 76% and 77% respectively[10]. Cardiff is the sole place in Wales that will be served by 5G before 2020, while Glasgow and Edinburgh are Scotland’s only places due to get fifth-generation technology in the near future. 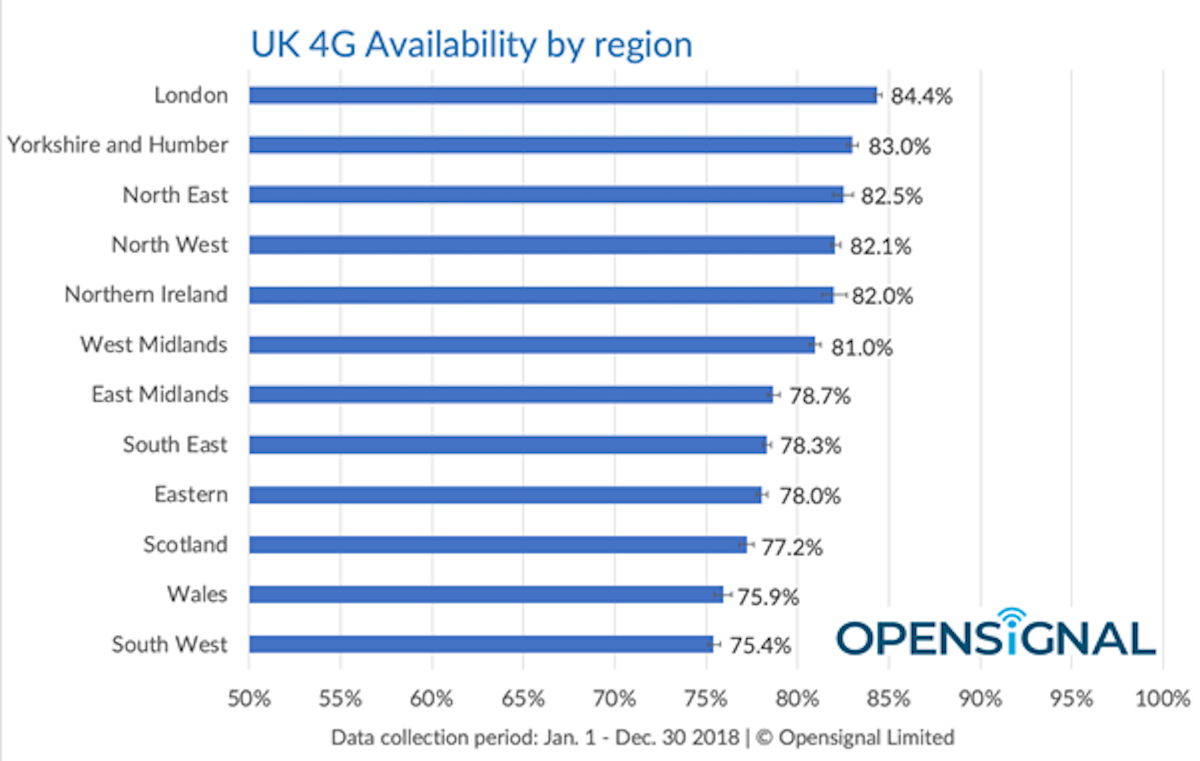 The digital divide is highlighted by the low 4G Availability figures in rural areas, while the UK’s major cities all have more than 80% 4G Availability according to Opensignal’s data[10].

Nottingham has the highest 4G Availability in the UK, with 89% of the city served by fourth-generation services. 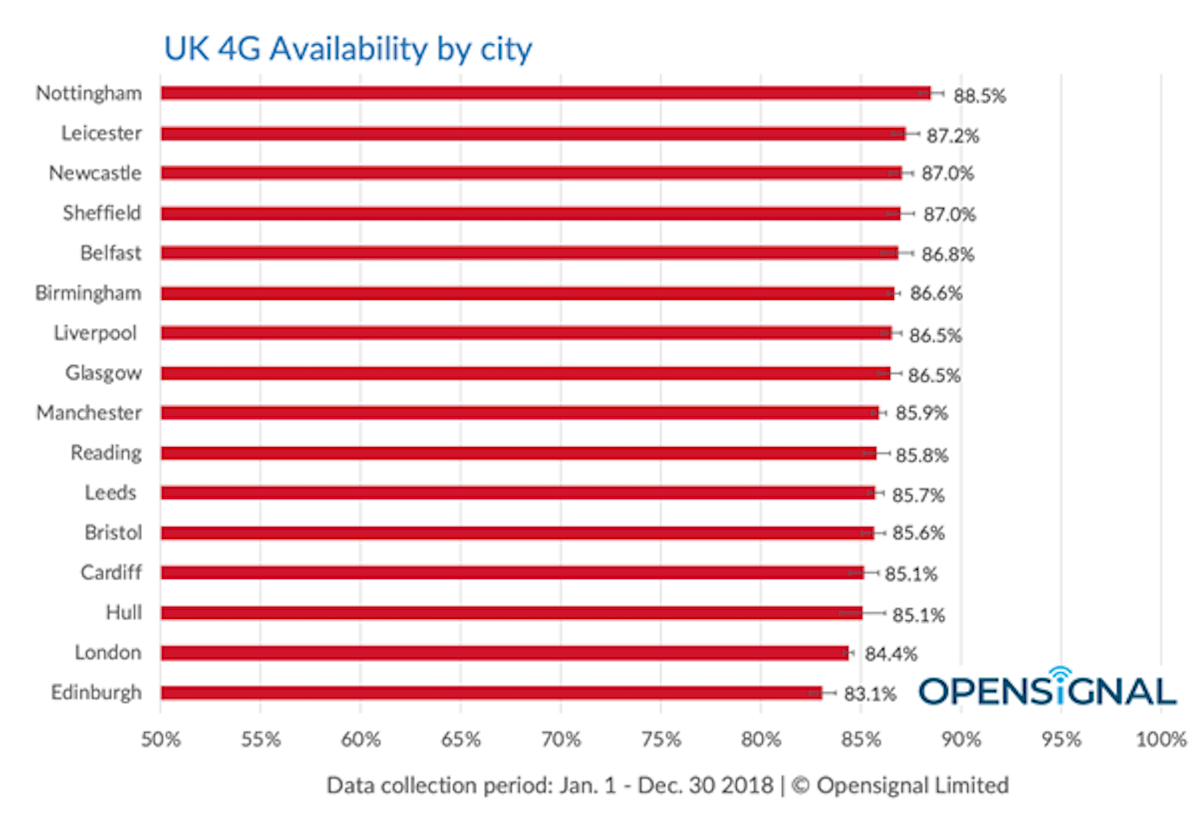 The Opensignal data is backed up by the evidence of mobile phone users, with three out of five Londoners (60%)[11] saying they had experienced difficulty connecting to 4G. This is the highest rate of complaints in the country. By comparison, less than a third (31%) in Newcastle reported such problems[12].

Across the country, a third (32%) of phone users[13] struggle with 4G connectivity at home, while 5 million people[13] have issues connecting while on public transport.

It is hoped that the arrival of 5G services will help address the UK’s coverage issues, but only one in seven phone users (14%) plan to upgrade to the new technology within the next year[5]. Even those who struggle with 4G are unconvinced by the merits of 5G, with only a fifth (22%) intending to switch in the near future despite their ongoing connectivity issues[16].

Only a fifth of people (19%) think 5G will improve connectivity[6], with almost a third (30%) thinking it will be more expensive[17], despite Vodafone and Three already announcing that their 5G services will be priced the same as 4G.

With both national coverage and consumer experience of mobile services so variable, Uswitch.com is warning that 5G will not solve the problems that currently exist in rural areas, and is urging providers to work with communities to improve rural mobile coverage.

Ernest Doku, mobiles expert at Uswitch.com, comments: “With so many of us completely reliant on our smartphones these days for our news, work, shopping and social media updates, there is little more frustrating than being unable to connect to phone services which we pay for.

“Ofcom reports that 66% of the UK has 4G coverage from all major provider, but more than 23 million people are still facing difficulties connecting to their networks.

“This can sometimes be blamed on network congestion at busy times, but often the capacity simply isn’t there for the numbers of people wanting to access a service they have paid for.

“The arrival of the next generation infrastructure should help with some of the problems currently experienced by 4G users, but this will not be an overnight solution, in particular as fewer than one in seven of us is planning to upgrade to 5G in the next year.

“Don’t suffer in silence and get blinded by all the chatter about 5G, if you are struggling with connectivity go back to basics and look at a couple of coverage maps, or install an app like Opensignal’s to see who has the best reception for coverage for you.

“However, the industry cannot use the launch of 5G as a band aid to cover up the shortcomings of 4G. Providers must work with communities to improve connectivity, especially in rural areas, to prevent millions of people being left stranded on technology two generations out of date.

“Unless networks improve their coverage in rural areas, the risk is that 5G will make the same mistakes as 4G and predominantly serve the cities at the expense of more rural areas of the country.”

Opinium surveyed a sample of 2,010 UK adults from the 26th to 29th July 2019. Results have been weighted to reflect a nationally representative criteria