Apple’s iPhone £25 battery replacement programme is ending: what you need to know

Time is rapidly running out to take advantage of Apple’s offer to replace your ailing iPhone battery for just £25. And if you miss the boat, you’ll have to pay substantially more.

So when exactly does the offer end? How much will you end up paying if you’re not quick enough? And which models are eligible? Read on and we’ll fill you in.

Yikes. I need to act fast. So how long have I got?

The iPhone battery replacement programme ends on 31st December. That might seem far away.

But when you consider that you could have to wait a few weeks for your local Apple store to get the right battery in stock and then have to take it in for repair, you need to move now.

It’s likely that there will be a rush before the year is out.

When a similar glut of customers tried to get their battery replaced back in January, some had to wait until March for their new power pack.

There’s another very good reason why you should replace your iPhone’s battery now.

While you will find one cheaper via third-party repair stores, Apple’s increasingly stringent terms and conditions mean that unofficial repairs can often void your warranty.

If you bought your iPhone less than a year ago (two years if you bought it from John Lewis), it’ll be covered under warranty.

Those with AppleCare+ can also replace their iPhone battery for free.

You’re pretty sure to be eligible

Only the oldest of iPhones out there aren’t eligible for a cheap new battery.

We swapped out the battery in our ageing iPhone 6 back in January and can honestly say that, coupled with new iOS 12 software, it’s still a great phone to use.

It might not be as fast as some phones, but it’s given us an extra year’s use when we were considering ditching it altogether.

Remember that Apple will insist on fixing other issues, such as cracked screens, before it replaces the battery.

This starts at £132.44 for an iPhone SE. In that case, it may be cheaper to get a new phone altogether.

Keen to hear how experiences with the battery replacement scheme? Here’s the Uswitch review.

It’s a good idea to replace your battery, even if it’s not that old

Changing your battery will give your iPhone a new lease of life, even if it’s not showing its age too much just yet. And that could save you money in the long term.

Put a new battery in a year old device and it could last another three years, meaning you don’t need to upgrade until 2021.

Battery capacity can drop by as much as 20% in two years, based on it being charged 1,000 times in that period.

Changing the power pack in an iPhone 8 bought this time last year should give it a noticeable boost.

Use iOS to check your battery health 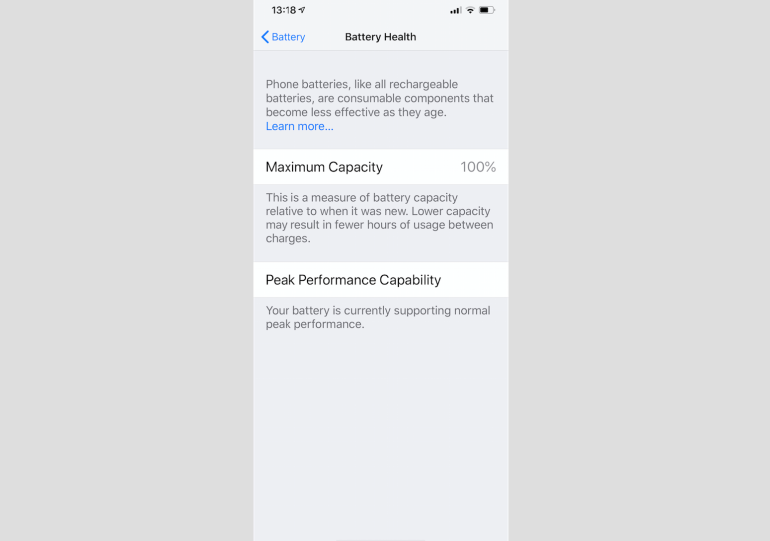 If you’re still not sure, update your iPhone’s software to iOS 12.

The latest Apple software (and some of the final versions of iOS 11) have battery health tools found within the Settings app, telling you how much wear and tear it’s undergone.

If an iPhone can only hold 80% of its maximum capacity, then you need to get a new battery now.

Why Apple is offering replacements at a cut-price

After being caught slowing down older iPhones towards the end of 2017, Apple was forced to apologise and started offering owners of its smartphones the chance to swap out their battery for just £25.

That represented a hefty drop from the usual £79 price.

While it still maintains it slowed older iPhones to ensure batteries didn’t die unexpectedly, the issue was a PR disaster for the company.

But with the arrival of new iPhones, it’s easy to forget that the battery replacement programme is still in operation. But as we’ve seen, not for much longer.

Think you’d prefer to upgrade to the newest iPhone instead? Before you do, read our review of the iPhone XS and XS Max.