Health App Index: Which countries track their health the most?

Over the past year, looking after our health has become more important than ever due to the impact of the coronavirus pandemic. Having been forced to find digital alternatives to nearly everything, health and fitness apps quickly replaced gyms and group sports during lockdown. But, which apps are benefiting us the most, and where in the world are they reigning supreme?

Before the pandemic, half of mobile app users were relying on health and fitness apps in order to achieve their goals. But with the closure of gyms and access to indoor forms of exercise cut off in March 2020 due to the first lockdown, reliance on fitness and health apps rose to 75%.

From running and fitness to counting calories in an effort to benefit our health, the mobile team at Uswitch has analysed data from fifteen of the world’s most popular health and fitness apps to show how concerned each country is about their health and reveal which ones are used the most around the world. 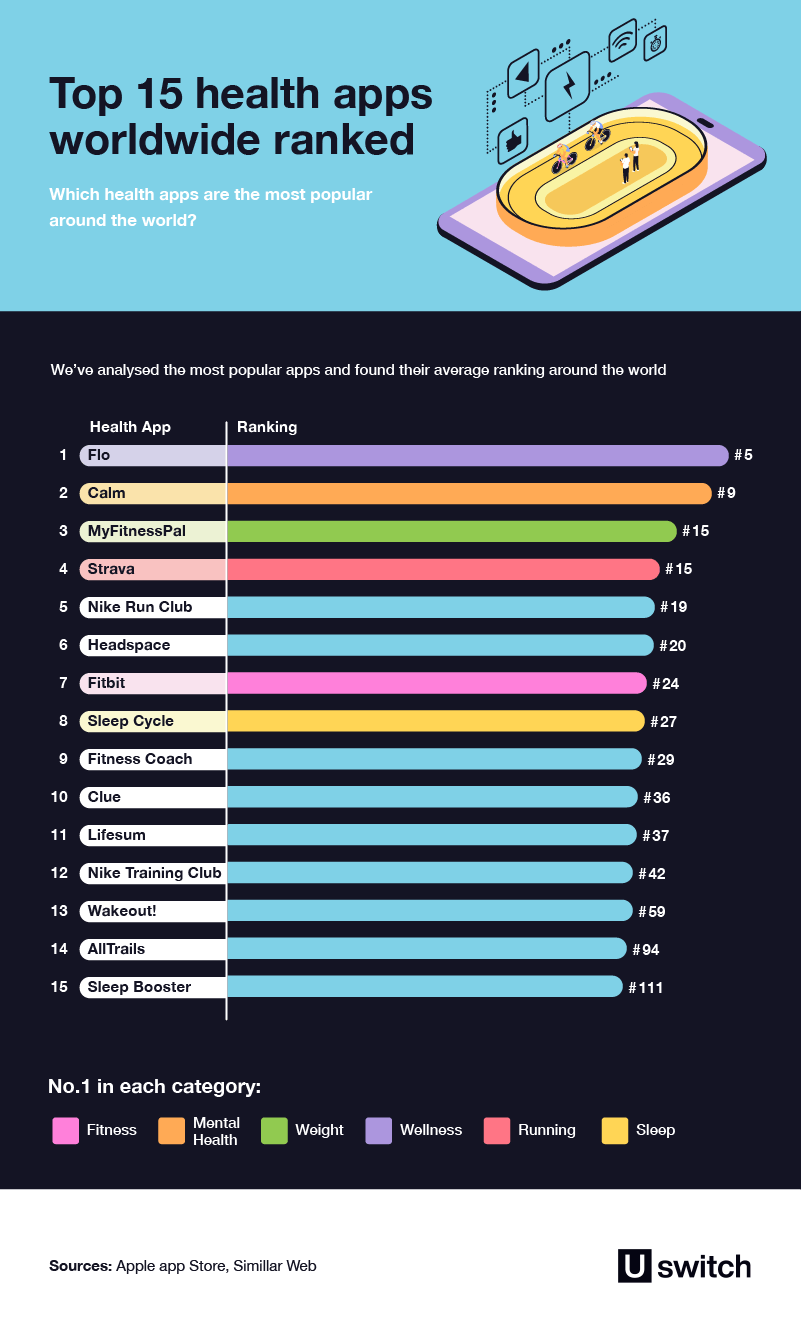 Taking 20 of the world’s happiest countries, we have analysed data from each of their app stores to reveal the most popular health apps worldwide based on their position in the charts.

Flo: My Health And Period Tracker, topped the list as the most popular health app in the world, ranking in the top 10 of every country's app store in our study apart from Austria.

Used by more than 30 million people around the world to monitor their cycle, period tracking apps like Flo help women have a better handle on what their bodies are doing. With COVID-19 not only impacting our mental health but also menstrual cycles due to added stress, it seems unsurprising that Flo has ranked top of the list for health apps.

Calm, a meditation and sleeping app, came in at number two on the list, scoring 14 out of a possible 15. As an app that used to be somewhat of a niche, the meditation guide now ranks in the top 20 on almost every country's app store.

With socialising out of the question for a little while as we find ourselves spending more time at home than ever, it's not surprising that caring for our mental health has become a priority this year. But with thousands of guided meditation tasks to choose from or stories that will help you sleep, Calm has proven to be a great app for relaxation that will help us weather the storm and help us sleep a little better.

Which countries are using health apps the most?

With our health being under the spotlight more than ever before and the need to look after ourselves becoming even more pressing, the Health App Index reveals that searches for health apps around the world have increased.

Taking 20 countries from the World Happiness Report, we have taken a seed list of popular health apps and analysed factors including weight, sleep, fitness, running, body and mental health. Our weighted scoring system* determined the countries who are most likely to use an app to track various elements of their health.

Australia has one of the highest search volumes for health apps in every category, scoring 227 out of a possible 300. The country has searched for apps related to weight and mental health over 100,000 times in the past five years, with most of that number coming in from the last 12 months. With the search volume so high per capita, this puts Australia at the top of the list for the country most concerned about tracking their health.

The United Kingdom came in at a strong third place, scoring 215 out of 300, according to search data per capita, with apps concerned with mental health being the countries highest priority. Ranking towards the bottom of our list is Finland, with a score of just 81 out of a possible 300 on how likely they are to want to track their health.

Interestingly, when comparing the World Happiness Report against the Health Index, the five countries least concerned with their health ranked within the top 20 of the happiest countries in the world, suggesting that happiness is achieved through many more means than just health apps.

Following a surge in walking and general exercise over the past 12 months, mobile users have been encouraged to find the best app that will help them achieve their health goals.

There is often much debate over which apps are best for which area, for example, do you download My Fitness Pal or Life Sum when counting calories? Or how about Calm or Headspace when looking to focus on your mental wellbeing? Using search volume data, we can determine which health apps are the most popular around the world.

Sleep Cycle / Sleep Booster Proving popular in our study, Sleep Cycle has hit the mark as the highest-rated health app in the Netherlands, Finland, and Costa Rica. Scoring an average of 4.7 out of 5 across the three countries on the app store, Sleep Cycle allows you to set bedtime routines, add in alarms and monitor your sleep patterns. Sleep Booster, an alternative sleep app, topped the leaderboard in Sweden, France, and Israel.

Calm Fitness and running apps may need to make way as Calm, the popular mindfulness app, topped the leaderboard in Ireland, Luxembourg and the United Kingdom. Scoring 4.7 on the App Store, Calm took the lead by just one percent in front of rival Headspace, which proved the most popular in Australia and Denmark. Users applauded Calm for its sleep and meditation features that allowed them to take steps towards changing their state of mind.

Lifesum Weight management apps including Lifesum ranked top of the leaderboard in Austria and the Czech Republic. Users said that Lifesum can help you achieve all of your health goals and has a variety of eating plans to keep you motivated. However, My Fitness Pal was generally preferred in other countries as the most downloaded weight management app, with it proving most popular in New Zealand.

Fitness Coach For the countries focused on fitness, it was revealed that Belgium chose Fitness Coach as their most popular health app, scoring 4.3 on the app store. Ranking an average of 3.8 out of 5, Fitbit came in second place, proving to be the most popular health app in Switzerland. Users cited that Fitbit helped them track their heart rate, count calories, and motivated them to walk more steps on average per day.

Nike Training Club For the few countries that prioritised running, Nike Training Club was found to be the highest-rated health app in Canada. Users said that the app helped them build their endurance whilst running, thanks to its guided runs which are wide-ranging and very motivational. All Trails came in second place topping the list in Germany.

Flo Period tracking apps including Flo proved to be most popular in the United States and Norway, according to search volume data.

Interestingly, while Flo, My Fitness Pal and Strava are the most popular apps around the world according to download numbers on the app store, sleeping and mental health apps such as Sleep Cycle and Calm proved to be the most searched for among users. This could be because mental health and sleeping well have been more of a priority in people's lives due to the isolation and loneliness brought on by the pandemic in 2020.

Are health apps worth the money? 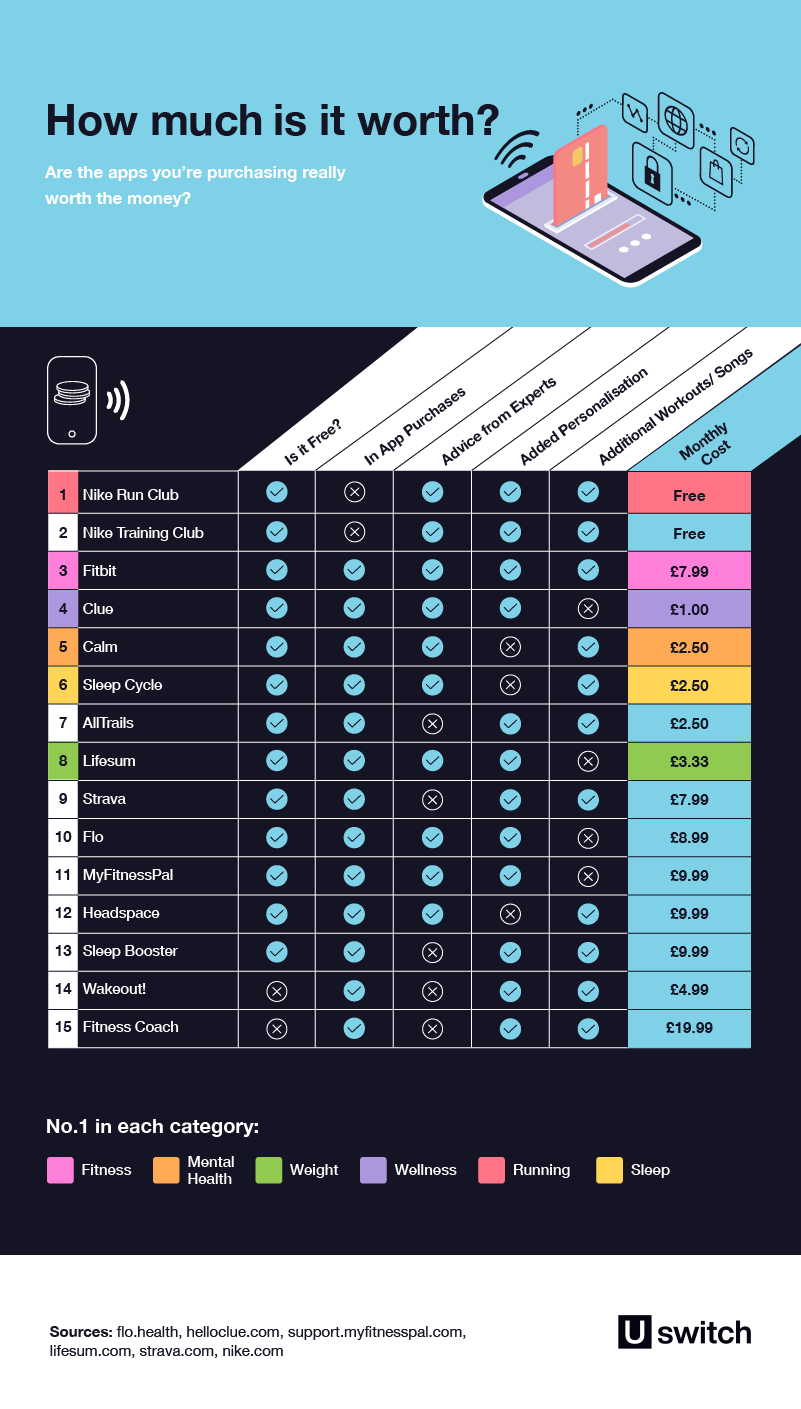 Between March and December this year, we discovered a 22 percent increase in people downloading health and fitness apps to better their health during the coronavirus pandemic. It can often be hard to know if ‘going premium’ is going to be worth both your money and your time. That's why we’ve revealed which health apps are really worth investing in.

Nike Run Club and Training Club have topped the list again, this time as the best value for money when signing up for their premium features.

To access content from guided runs from experts and tracking your progress to setting yourself personalised goals, all you need to do is sign up for a free membership with Nike.

On the opposite end of the spectrum according to data from premium pledges, Fitness Coach ranked the worst value for money. Though this proved to be a popular app across Belgium, to use any of the features for more than a 3-day trial, Fitness Coach can ask you to pay as much as £19.99 a month.

So next time you're tempted to update your health apps, really consider whether going premium is worth it or whether you can get your more for your money elsewhere.

What do the top health apps know about you?

As so many people continue to use health apps as an alternative to gyms for the foreseeable future, we looked into how safe each of our top 15 apps is for collecting data on us. Most people are aware that brands collect personal information from emails to names and addresses, but what else do they know? We’ve dug a little deeper:

Looking at every app's privacy policy, we determined 24 factors of data that each health app collects on you. This can range from data you would expect such as your name, date of birth, email and address but can also include and are not limited to your eating habits, sleep patterns, weight and sexual activity. Your health apps will then use this data to target your experiences, including ads.

My Fitness Pal topped this list, as it was revealed to be collecting a staggering 80% of data factors from our list. This includes everything from your name, your BMI, calorie intake and weight to personalise your experience.

Taking a seed list of the top-ranking health apps across the world, we analysed several data sets from 20 different countries to determine which apps are most popular and how concerned each country is about their health. To do this, we explored the following five metrics:

The 20 countries used in the report are:

To find the top 15 health apps worldwide, we took our seed list of apps and found their position in each country on the App Store and then calculated which came out on top worldwide by adding up their scores.

The world’s most health concerned country by health issue

Taking search volume data from AHrefs, we ranked each country from most to least concerned about their health. To do this, we used a ranking system considering six factors to achieve a final score out of 300. To find the top health category in each country, we added up the total scores of each app and divided it by the number of categories to find the average percentage.

Are paid health apps worth the money?

Analysing data from our top 15 apps premium section of their websites and the apple app store, we determined six criteria which revealed how much you get for your money when going premium.

What data do health apps have on you?

Taking the seed list of apps we had gained from earlier in the study, we viewed each apps’ privacy policy. Each piece of data that was collected by the app determined 24 criteria that we could rank apps on, depending on how much data they had on you.

Data Collected on you