The European capitals with the biggest reduction in air pollution

With environmental health becoming an increasingly global concern, Uswitch was keen to find out which capital cities were doing the most to tackle air pollution.
Share this guide 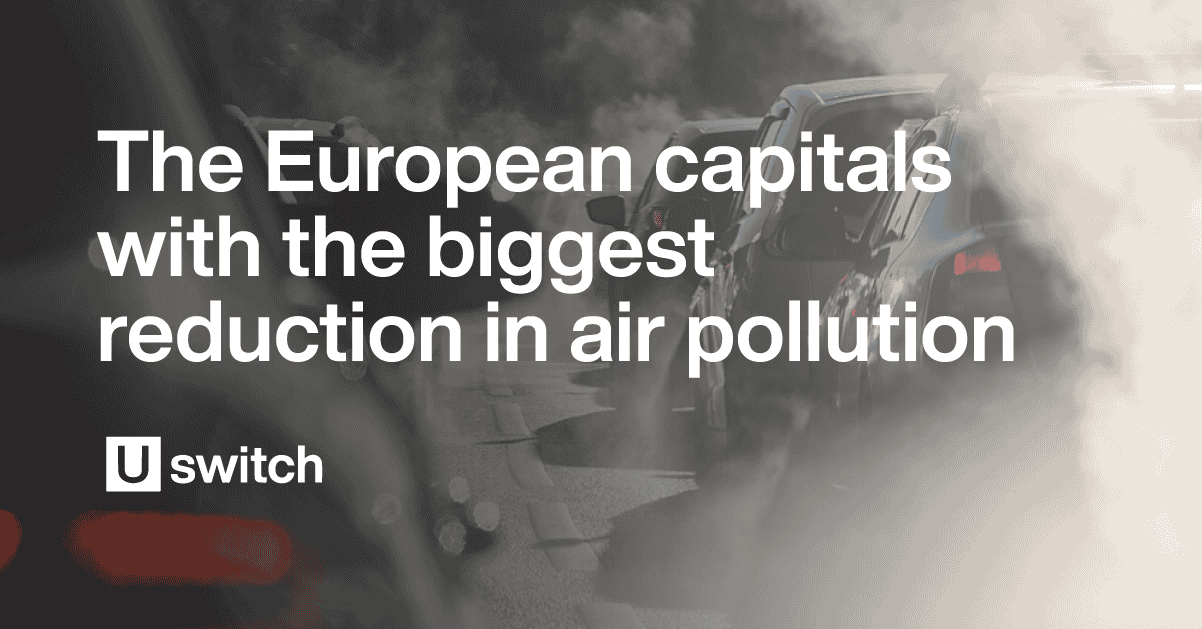 The need to reduce air pollution has never been more publicised, with every nation’s environmental practices under increased scrutiny. While this has led to world leaders placing more emphasis on green energy initiatives, the fact remains that far more work is required if further severe damage to the planet is to be prevented.

Air pollution is one of the most harmful environmental risks to human health, with the World Health Organisation estimating that seven million deaths are linked to poor air quality each year. A major factor in our ability to tackle air pollution will be how successfully we promote and accommodate the use of electric vehicles. Electric vehicles are an eco-friendly alternative to petrol and diesel powered vehicles that help reduce air pollution.

With many buyers put off by the perceived lack of charging ports available for electric vehicles, it’s imperative that we increase the awareness of at-home EV charging stations. These devices offer a cost-effective and convenient way of powering your electric vehicle at home.

In a bid to discover which countries were most serious about tackling the environmental crisis, EV charging experts at Uswitch conducted a study on twenty-four capital cities in Europe, revealing which European capitals have had the biggest reduction in air pollution.

The European capitals with the largest reduction in air pollution 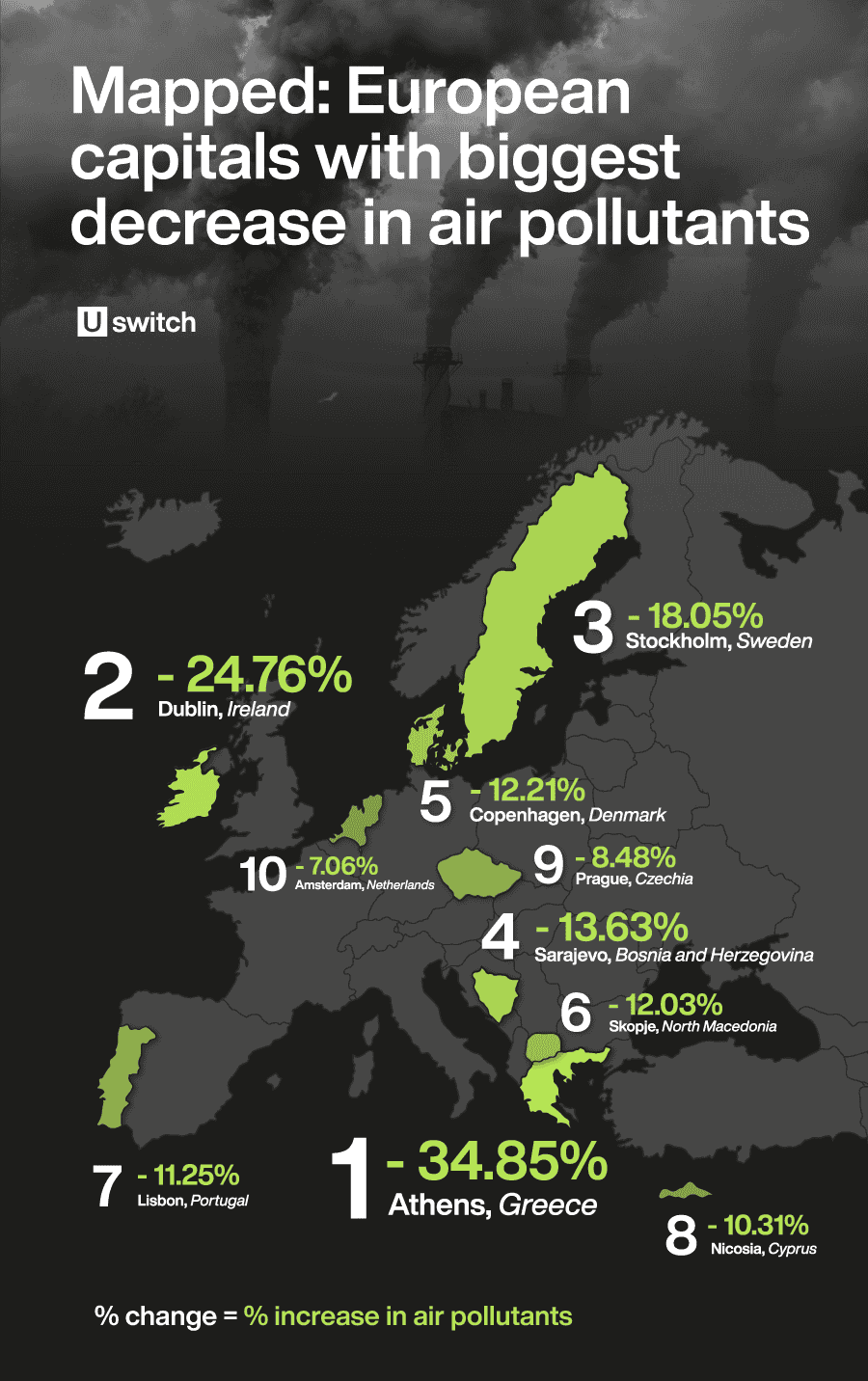 In order to determine which European capital cities had reduced their air pollution most, we analysed data made available from sources such as Eurostat and World Air Pollution. Using the Air Quality Index (AQI) metric, the data documents the average yearly production of numerous harmful pollutants such as carbon monoxide and nitrogen dioxide to give an overall AQI score for each capital city.

By looking at the AQI scores from 2019 to 2021, we were able to determine which cities had made the greatest improvements in air quality during this period.

According to our study, Athens has seen the greatest reduction in air pollution with an impressive decrease of nearly 35%. While this reduction provides undoubted cause for optimism, the figures look to have been accentuated by the lockdowns that occurred in the Greek capital following the beginning  of the COVID-19 pandemic.

This is backed up by the data which shows that a decrease of nearly 43% occurred between 2019 and 2020, with a 14.15% increase in the following year as normal life began to resume.

A similar trend can be found for Dublin, which has enjoyed the second-highest increase in air quality. With an overall decrease of nearly 25%, Dublin’s air pollution dropped 32.8% between 2019 and 2020 before a 12% increase over the next twelve months.

Stockholm was the capital city with the third-highest reductions. With an overall decrease of 18.05%, Sweden’s most populated city bucked the trend set by Athens and Dublin by further reducing their air pollution between 2020 and 2021.

Despite a concerning high AQI score, Bosnia and Herzegovina capital Sarajevo has at least managed to significantly decrease their air pollution. The former Yugoslavian city was second only to its Balkan neighbour Skopje as the capital with the highest air pollution in 2021 but its overall reduction of 13.63% places it at fourth on our list.

The top five is rounded off by Danish capital Copenhagen, with the Scandinavian city decreasing its air pollution by over 12%. Like fellow Nordic city Stockholm, Copenhagen has also managed to continue its reductions between 2020 and 2021.

The remainder of the top ten is made up of Skopje, Lisbon, Nicosia, Prague, and Amsterdam. Despite Skopje achieving a reduction of over 12%, the North Macedonian capital is still the place on our list that produced the most pollution.

Of the twenty-four European capitals covered in the study, there were seventeen that managed some reduction in air pollution. London’s decrease of 0.16% between 2019 and 2021 represented the lowest reduction of the seventeen countries. 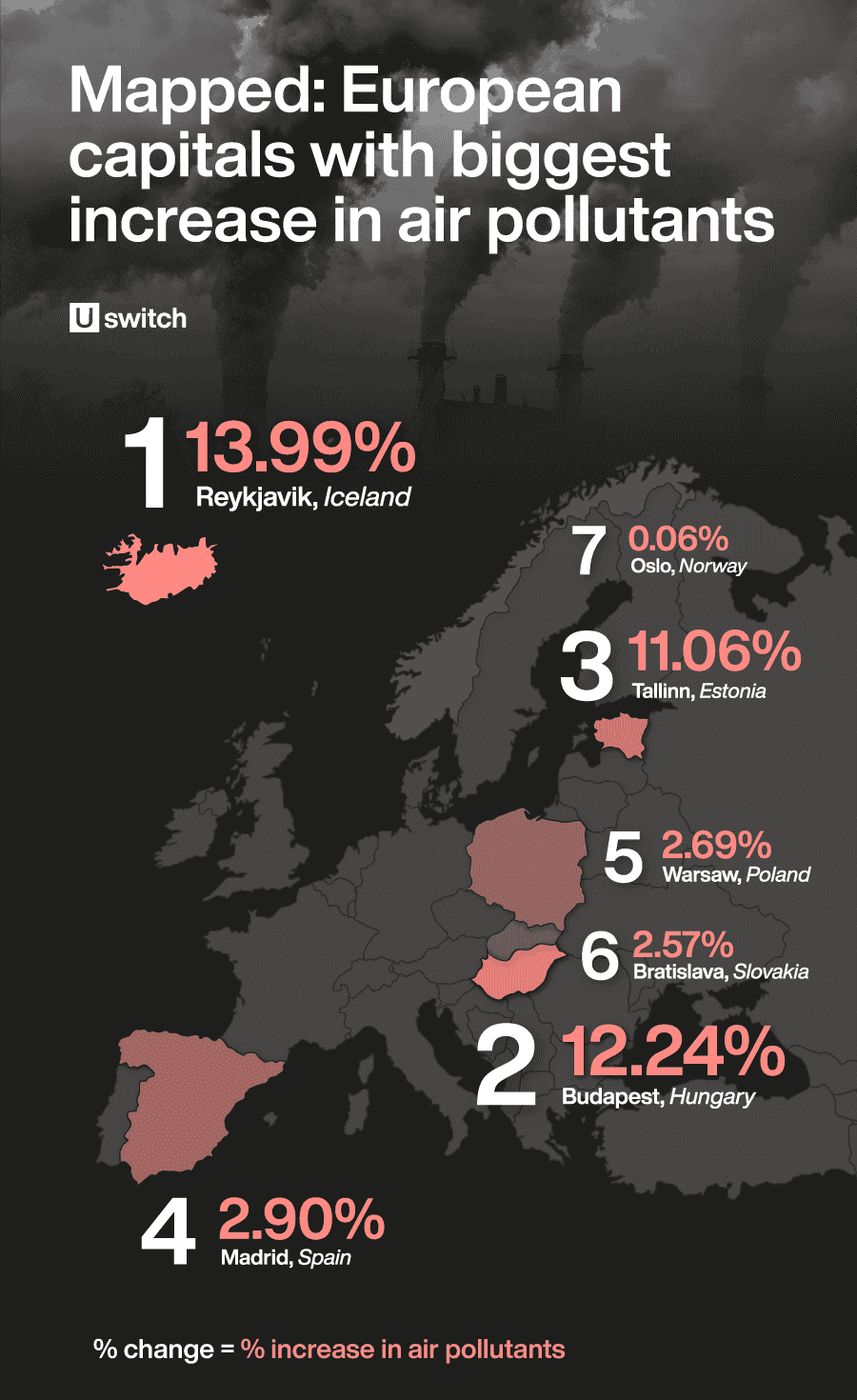 Despite widespread coverage of the threats posed by poor air quality, almost 30% of the cities in the study were found to have had an increase in air pollution.

Reykjavík was found to be the capital city with the highest air pollution increase. While the overall increase of 13.99% represents a concerning trajectory, this is balanced out by the fact that the Icelandic capital has the lowest AQI score of all the cities on our list.

Hungarian capital Budapest was found to have increased its air pollution by 12.24%, the second-highest increase of the places included in the study. Unlike Reykjavík, the city nicknamed ‘the heart of Europe’ had one of the higher AQI scores on the list, making the decrease in air quality all the more troublesome.

With an overall increase of 11.06%, Estonian capital Tallinn was responsible for the third-highest increase in air pollution. While the North European city recorded one of the lowest AQI scores on the list, this was weakened by the fact that it suffered an air pollution rise of over 14% between 2020 and 2021.

While Reykjavík, Budapest, and Tallinn endured by far the highest increases, there were another four cities in the study that were found to have suffered a rise in air pollution.

Recording an overall increase of just under 3%, Spanish capital Madrid recorded the fourth-highest increase on our list. With most of the increase occurring between 2019 and 2020, Madrid is the only Mediterranean city on our list found to have suffered a reduction in air quality.

Warsaw and Bratislava were the cities that recorded the fifth and sixth highest rises, with increases of 2.69% and 2.57% respectively. Like Budapest, the Polish and Slovakian capitals both recorded AQI scores that were among the highest of the twenty-four cities covered.

With a slight increase of 0.06%, Norwegian capital Oslo was the final city to see a rise in air pollution.

How can I help reduce air pollution?

Air pollution is something that affects us all. While this study has looked at pollution on a mass scale, there are a few steps you can take today to help improve the air quality in your city. Energy expert Ben Gallizzi tells us how:

“Improving your energy efficiency isn’t as hard as you might think. You can help tackle air pollution by making a few simple changes to your home and lifestyle.

Using energy efficient bulbs and appliances in your home may sound like a small thing, but they’re an easy way to reduce your energy emissions, not to mention your bills!

Switching to an electric car provides an eco-friendly alternative to traditional fuel-powered vehicles. With lots of high-quality, cost-effective home charging options now available, going electric is easier than ever.”

Air pollution can affect the environment in many different ways, including affecting air quality and the health of plants and trees, and causing harsh weather.

Air pollution is a result of emissions, including those from factories and petrol and diesel cars.

It can have a significant impact on human health by impacting oxygen levels which can cause illness and disease.

As electric cars don't produce any carbon dioxide when running, choosing to drive one can reduce emissions and air pollution.