Climate change is a global concern and it is becoming increasingly more difficult to ignore the impact that tourism has on the environment. Tourists have begun to question: Which tourist attractions from around the world are making the biggest effort to ‘go green’?

When we visit tourist attractions, we often only consider the benefits for us. The relaxation, the memories and the experiences. But what impact do they have on our planet? The negative environmental impacts of tourism are substantial – this includes the decline of natural resources as well as the increase in pollution and waste. By 2030, we are predicted to see a 25% increase in CO2 emissions (from 1,597 million tons to 1,998) from the tourist industry alone.

From renewable energy and recycling schemes to conscious efforts to reduce emissions, the energy team at Uswitch have analysed the eco-friendly credentials of each attraction to reveal the best and worst tourist attractions for sustainability around the world. 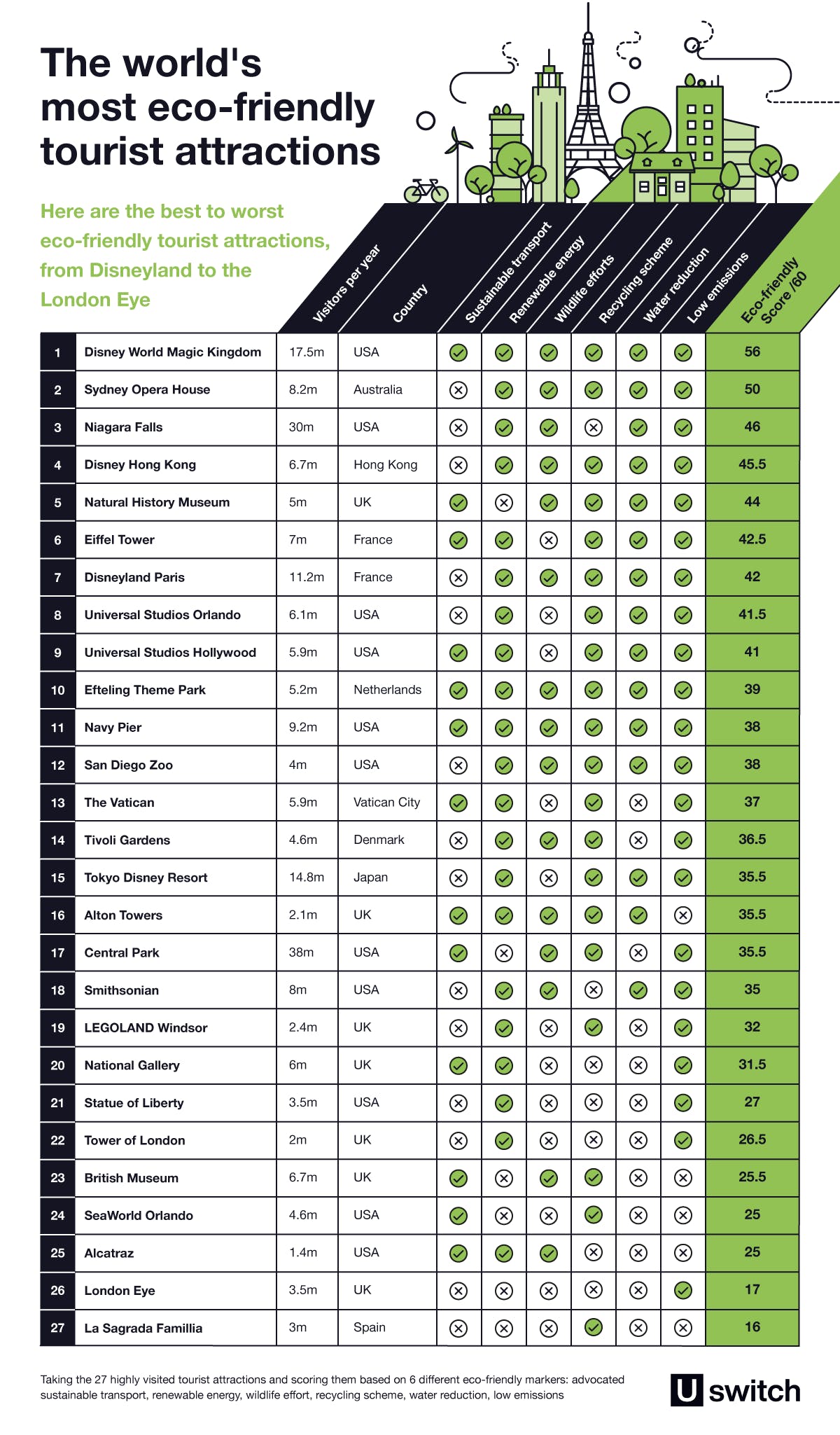 Taking 27 of the world’s most visited tourist attractions, we have analysed their commitment to sustainability, based on low emissions, water reduction, recycling schemes, re-wilding efforts, renewable energy and sustainable transport to give a maximum score of 60.

Magic Kingdom at Walt Disney World located in Florida topped the list as the most eco-friendly tourist attraction. With over 17.5 million annual visitors it’s the most visited amusement park in the world, but despite the area containing many rides and amusements, the park has made the largest conscious effort to decrease the impact it has on the environment. Almost a third of the 40-square-mile park is dedicated to wildlife and conservation. 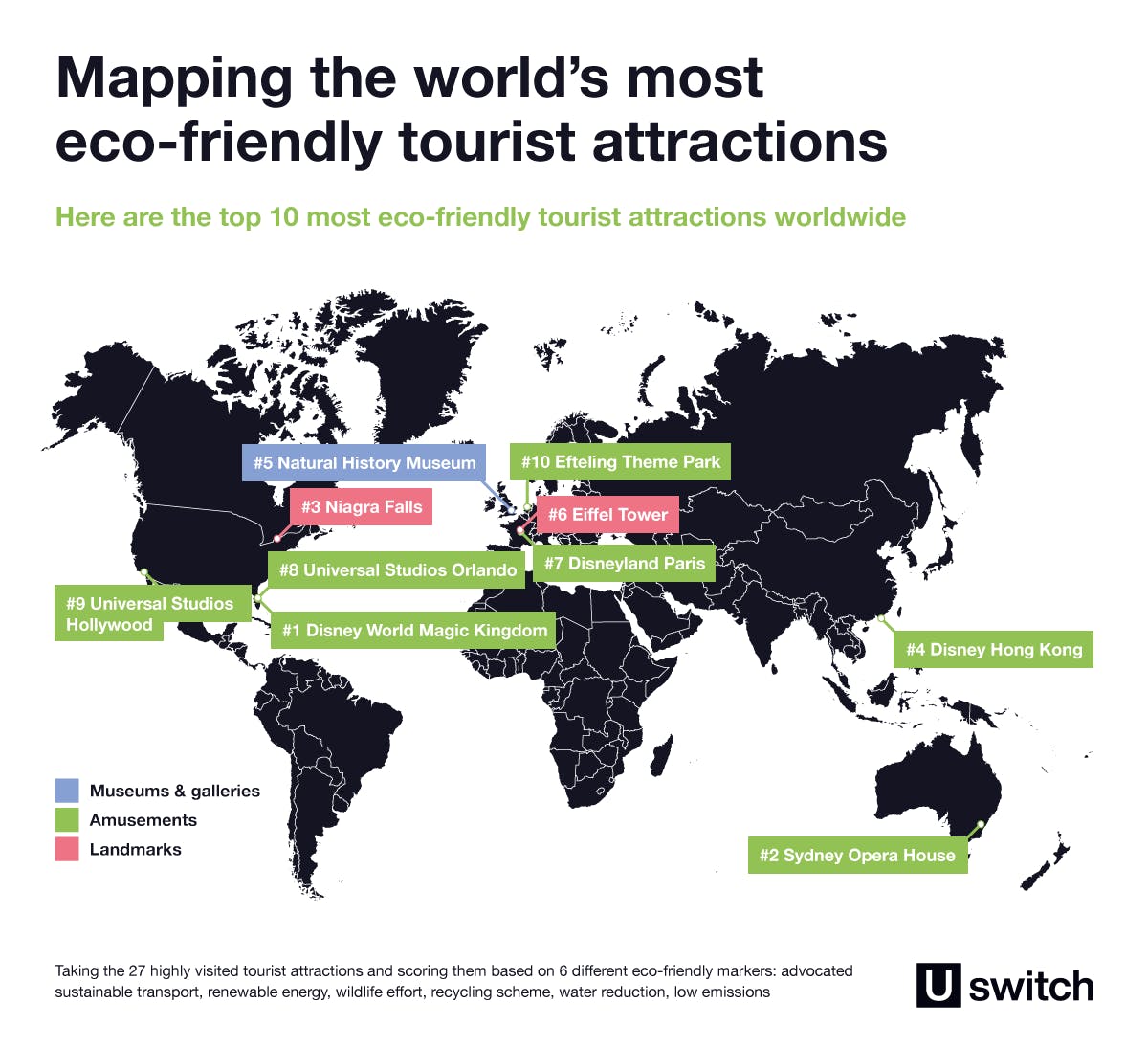 According to the Theme Index 2018, attendance at the top 10 themed attractions worldwide exceeded more than half a billion visitors in 2018, that’s equivalent to 7% of the world population. The major theme park groups saw a 5.4% increase in visitors from 2017 alone.

But it’s not just the thrill of the ride that's hair raising. The environmental impact of these attractions is catastrophic.

Think about the energy consumption of a single rollercoaster, with flashing lights and speeding carts. Or the volume of water needed to generate a log flume. And that's before you take into consideration the disposal of waste and the transport for visitors.

Now attractions all over the world are making a conscious effort to become more environmentally friendly, to help tackle climate change and reduce their carbon footprint. 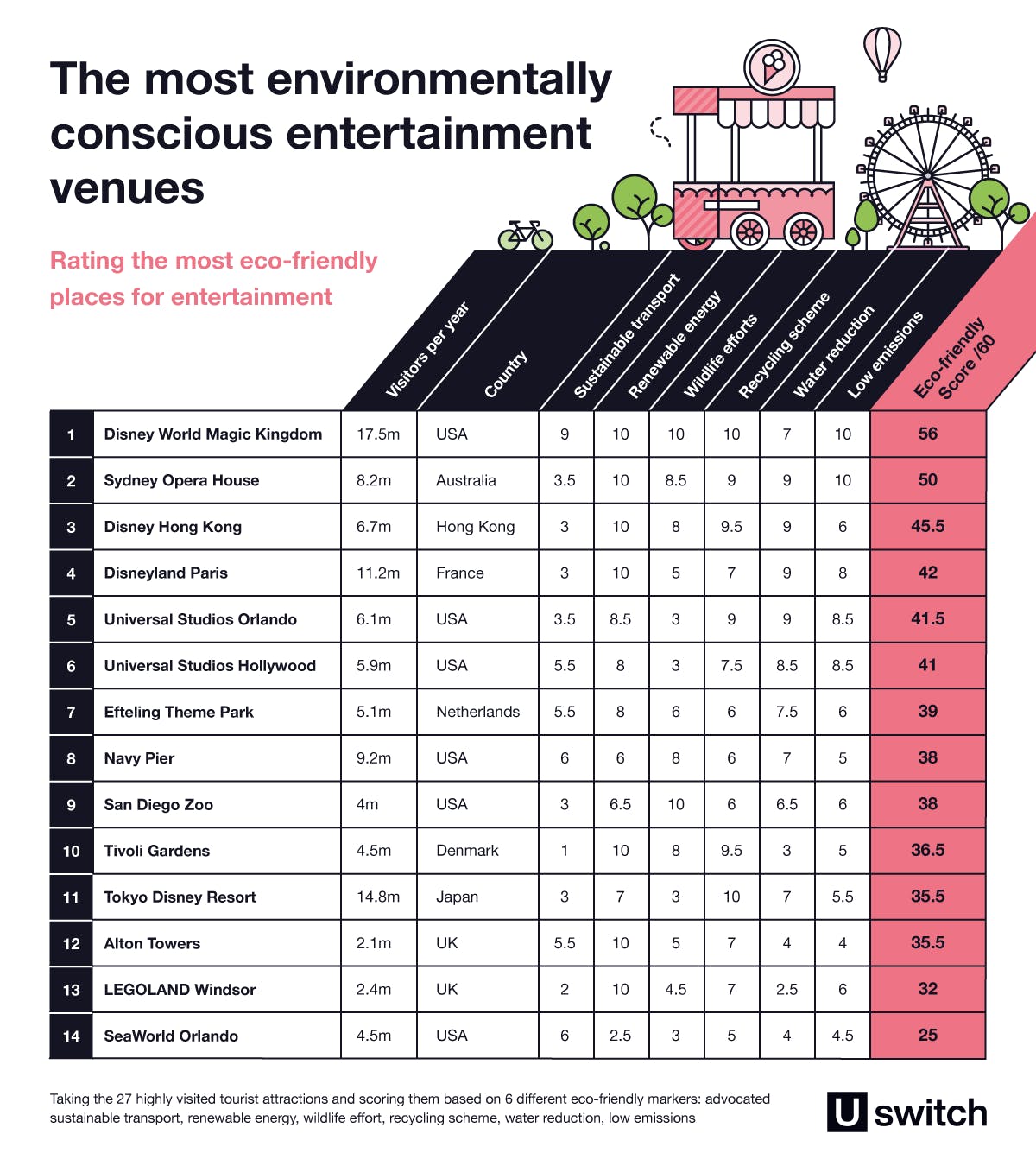 Walt Disney attractions are the largest theme park group worldwide, with a reported 157,311,000 visitors in 2018, an increase of 4.9 per cent from 2017. Disney pledged to cut emissions by 50% by the year 2020 from 2012. Throughout Disney's attractions, the organisation has made continued investments in renewable and low carbon energy, and in 2019 Disney successfully reduced its net emissions by 47% compared to 2012.

The Magic Kingdom at Walt Disney World, Florida has made the biggest strides to become an eco-friendly tourist attraction. With a score of 56 out of the possible 60 on the eco-ranking, Magic Kingdom is the world’s most sustainable amusement park. Disney brought a 270-acre, 50+ megawatt solar facility to Walt Disney World, which generates enough power from the sun to operate two Disney parks. The solar facility has the power to reduce annual greenhouse gas emissions by more than 52,000 metric tons and is equivalent to removing 9,300 cars from the road each year.

Disney’s biggest competitor, Universal Universal Studios Orlando, ranked in the eighth spot, with a score of 41.5 out of the possible 60. In an effort to decrease their energy consumption and carbon footprint, the park has switched to LED lighting, saving 2.6 kilowatt-hours annually. However, the park doesn’t have a wildlife or nature conservation scheme in place, in comparison to competitor Disney World Magic Kingdom. 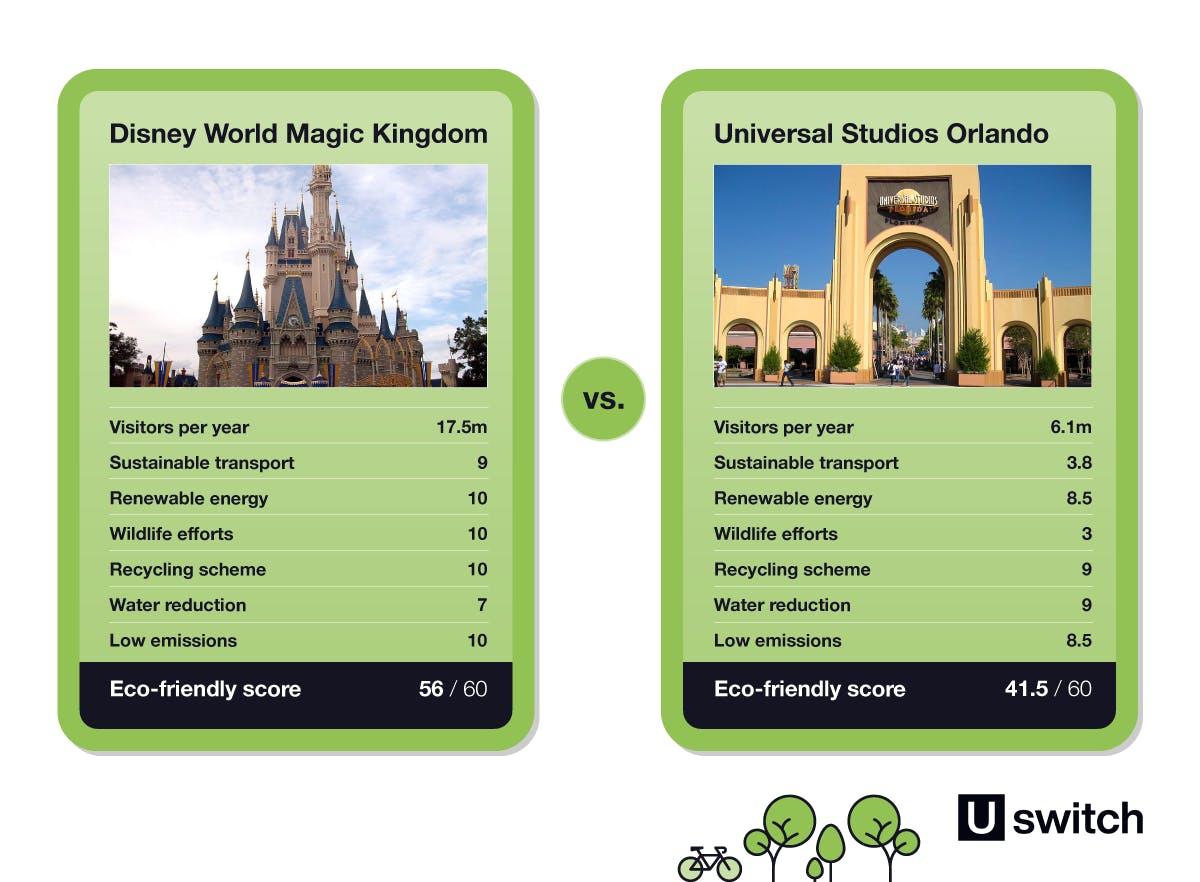 With climate change a looming threat and the need for renewable energy sources ever more pressing, landmarks need to become green too. Of the 27 tourist attractions, there were nine landmarks with sustainability plans in place. We analysed each of them to reveal the most eco-friendly landmark. 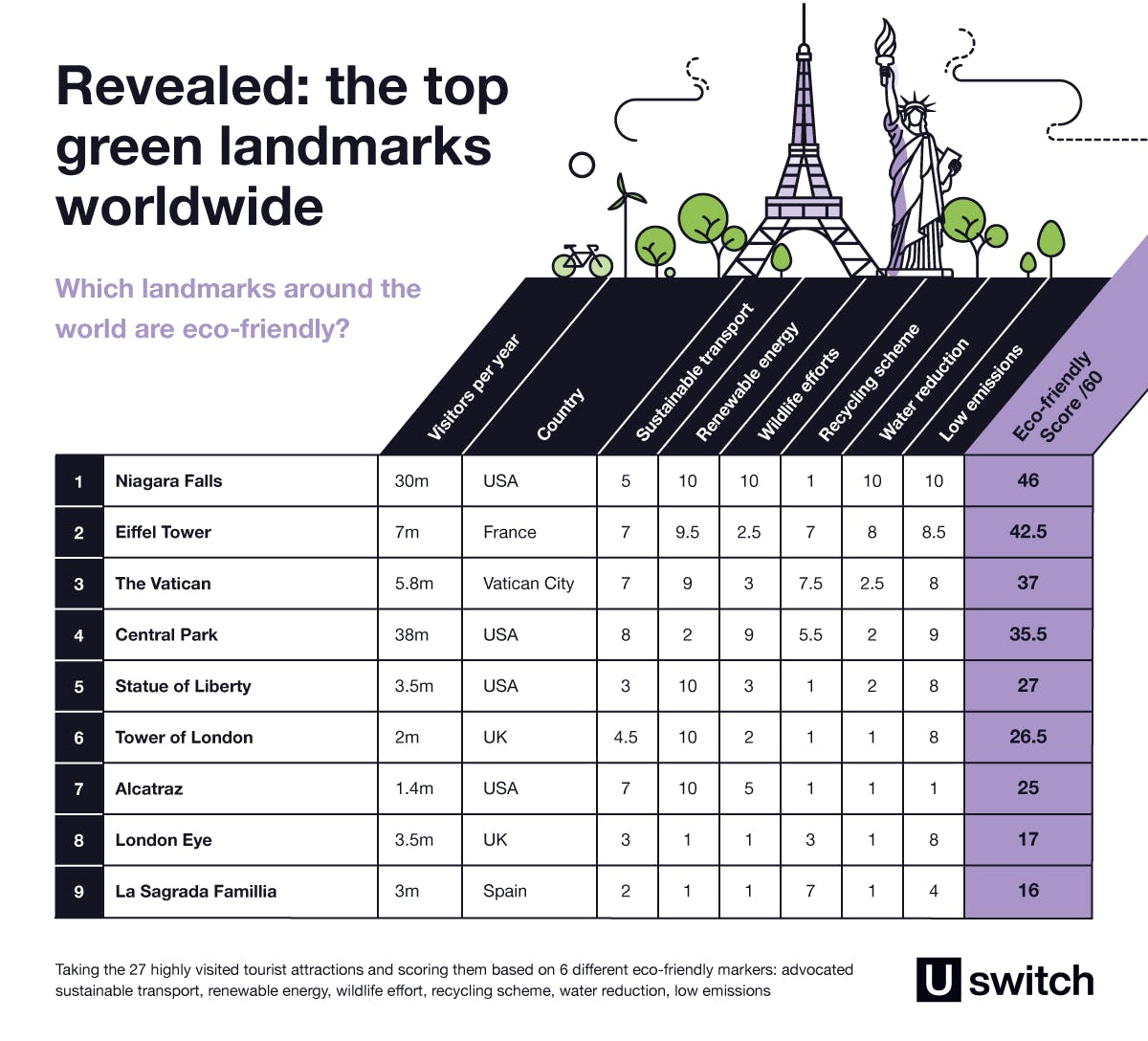 Niagara Falls is not only the honeymoon capital of Canada but a hub for clean energy. The tourist hotspot is one of the world’s greatest sources of hydroelectric power, operating two power plants which produce 2.4 million kilowatts of energy per year.

In recent years, the iconic Eiffel Tower, which stands at 300 metres, has made a conscious effort to become more sustainable. The renowned architectural icon has two turbines installed in the tower’s lower floor, which have the power to generate 10,000kWh of electricity per year. LED lights and a solar thermal array are installed within the tower to provide hot water.

The Tower of London is one of the world’s most famous fortresses. In recent years the historic building has implemented a sustainability strategy to make a positive impact on the environment. The building managed to decrease its greenhouse gas emissions from 4,989 tons in 2018 to 4,669 in 2019. However, the building saw a 29% increase in water consumption due to greater usage. 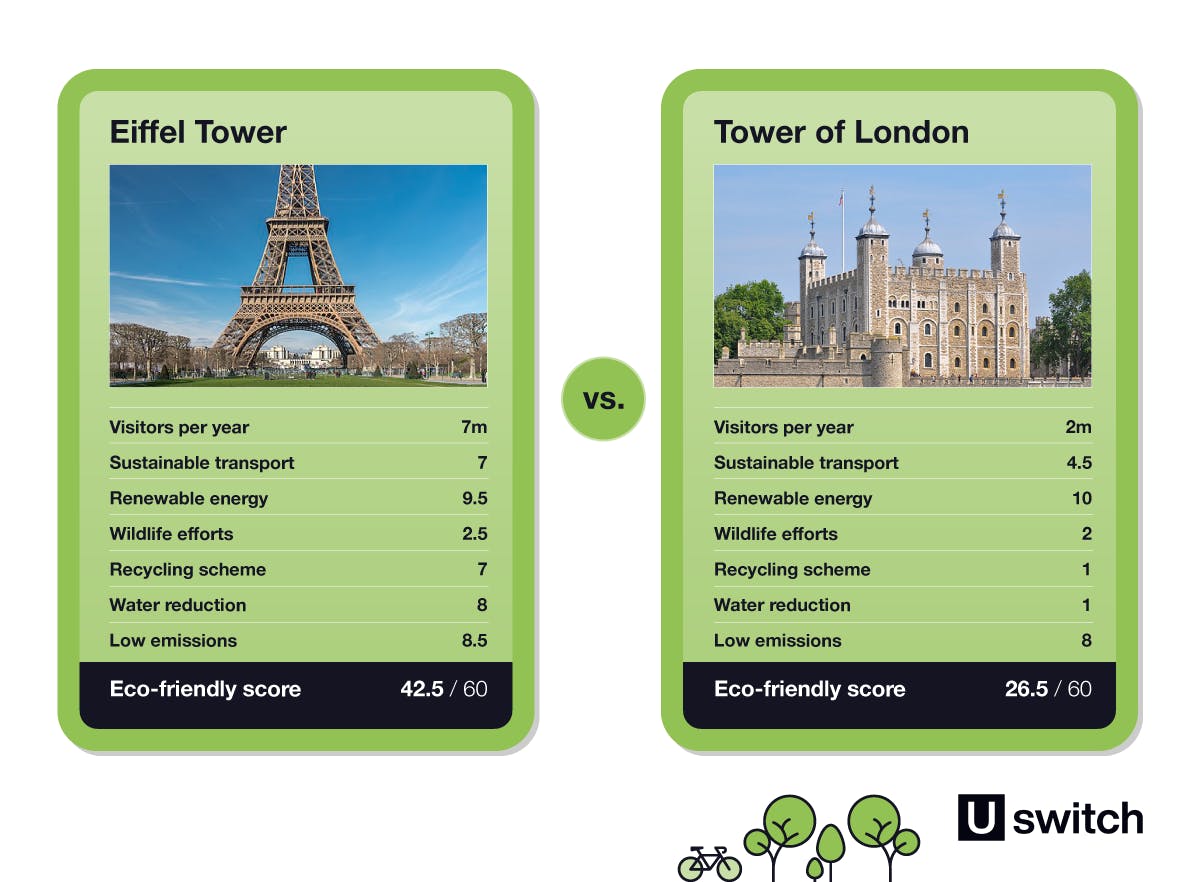 The world’s most eco-friendly museums and galleries 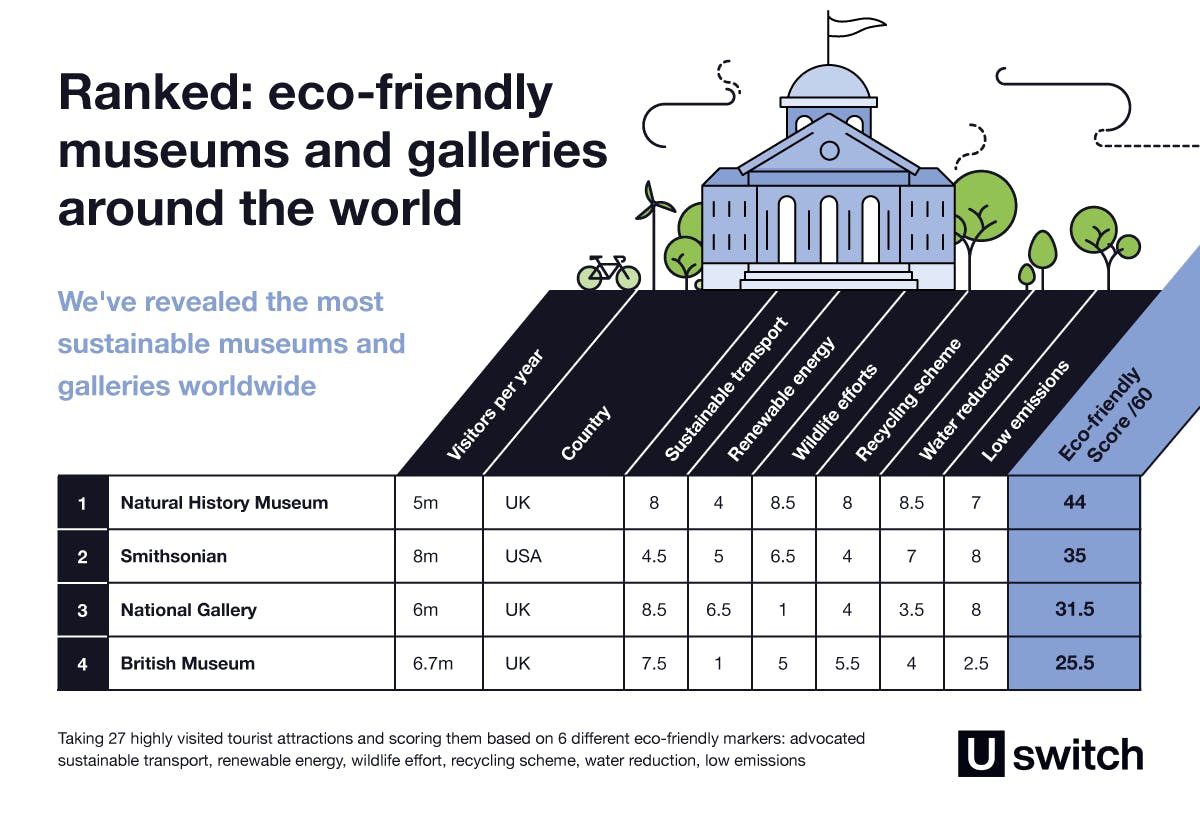 The British Museum is the most visited attraction in the United Kingdom, attracting 6.24 million visitors in 2019 alone. But despite the popularity of the museum, its effort to increase sustainability has been limited in comparison to the UK’s Natural History Museum.

The Natural History Museum, located in London, scored top marks for its eco-friendly credentials, having the highest consciousness when it comes to its impact on the environment. In 2019, the museum announced that it had successfully reduced its total greenhouse gas emissions by 5%, making its carbon footprint 10,139 tonnes.

The museum is consistently finding new ways to reduce its energy consumption, with a trigeneration energy centre that generates most of the energy used by the museum - which has saved more than 15,000 tonnes of carbon dioxide since installation.

But it doesn't stop there – throughout the building and onsite cafes, the museum has implemented recycling schemes to help reduce waste. And the National History Museum is undertaking a host of measures to help reduce water consumption, including sensor-controlled taps and dual-flush cisterns fitted into toilets. 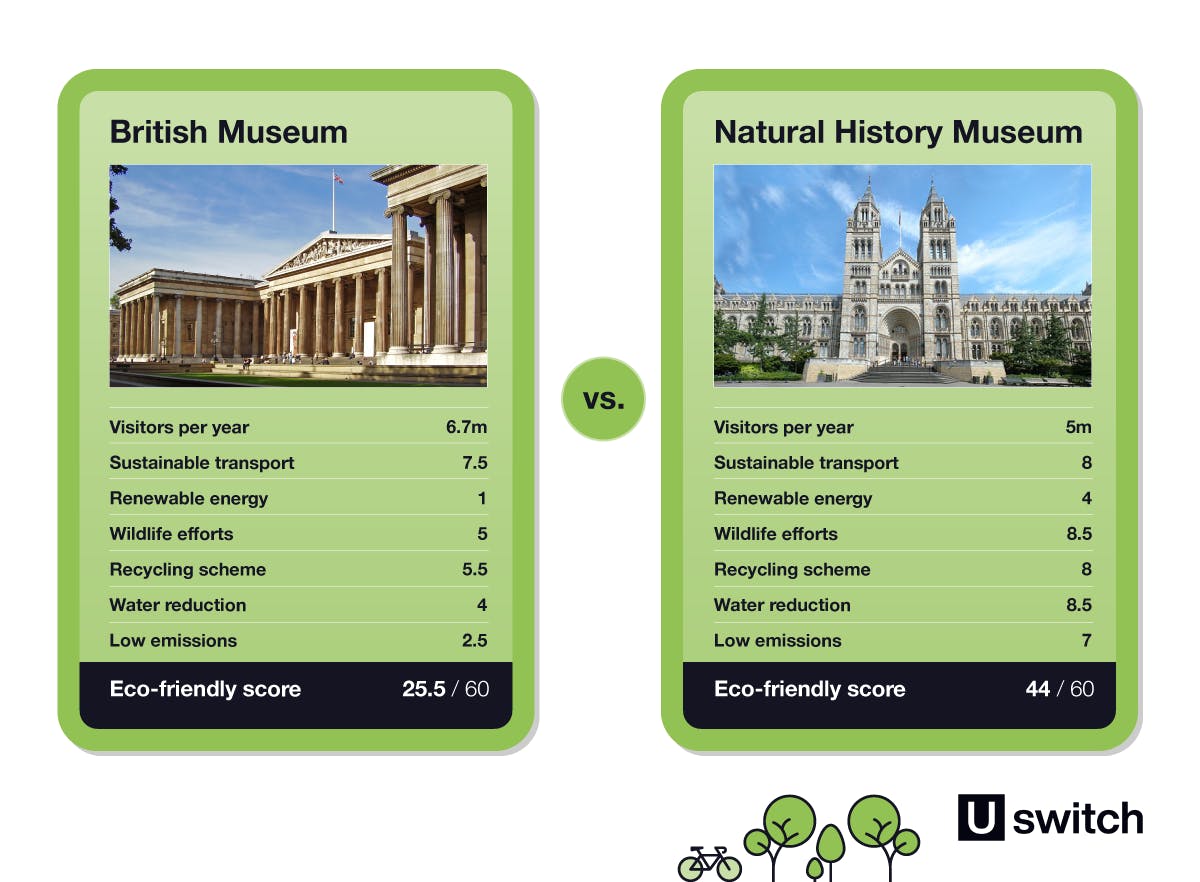 Taking a list of the 27 most visited tourist attractions around the world, Uswitch analysed their commitment to sustainability, based on six eco-friendly credentials: Low emissions, water reduction, recycling schemes, re-wilding efforts, renewable energy and sustainable transport.

Each attraction could score a maximum of 10 points for each element, and we used a weighted ranking system to achieve the final score out of 60.