European cities are beginning to make progress in green initiatives and are transforming cities in the quest to reduce carbon emissions. But which cities are making the biggest strides to sustainability and what are they doing to make mobility greener?

In 2017, road transport contributed 21% of the EU's total emissions of carbon dioxide (CO2), the main greenhouse gas. Despite more efficient vehicles and new policies being implemented, the level of greenhouse gas emissions from transport has continued to grow globally.

Public transport plays an important role in lowering the transport sector’s levels of CO2 emissions and increasing its energy efficiency. Taking 21 of Europe’s most populous capital cities, the energy team at Uswitch have analysed the ‘sustainable mobility’ of each city, based on e-scooter legislation, sustainable transport plan, participation in European Mobility Week, eco-friendly buses, bicycle rental scheme, and sustainable urban rail to give a maximum score out of 60.

Which European city has the most sustainable transport system?

Booming cities need contemporary mobility systems capable of transporting increasing numbers of people while doing the least possible harm to the natural environment. Scoring 42.30 out of the possible 60, Helsinki in Finland topped the list as the European city with the most sustainable mobility. Walking, cycling and public transport account for 77% of all journeys in Helsinki, with two-thirds of residents preferring to walk or use public transport.

Helsinki has a prosperous and diverse sauna culture, and it's now used as an incentive to encourage sustainable mobility choices across the capital city. If residents walk, cycle or use public transport they are rewarded with free admission to Uusi Sauna. This scheme is part of the Mobility Urban Values (MUV) project encouraging citizens to opt for a sustainable mode of transport.

Helsinki has a recorded 1,200 kilometres of cycling routes, 730 kilometres of which are paved. Roughly 500 kilometres of the routes run through recreational areas and 90 kilometres along waterfronts. With more than 3,450 city bikes at 238 bike stations dotted around the city, there is an abundance of opportunities for residents to switch to two wheels. 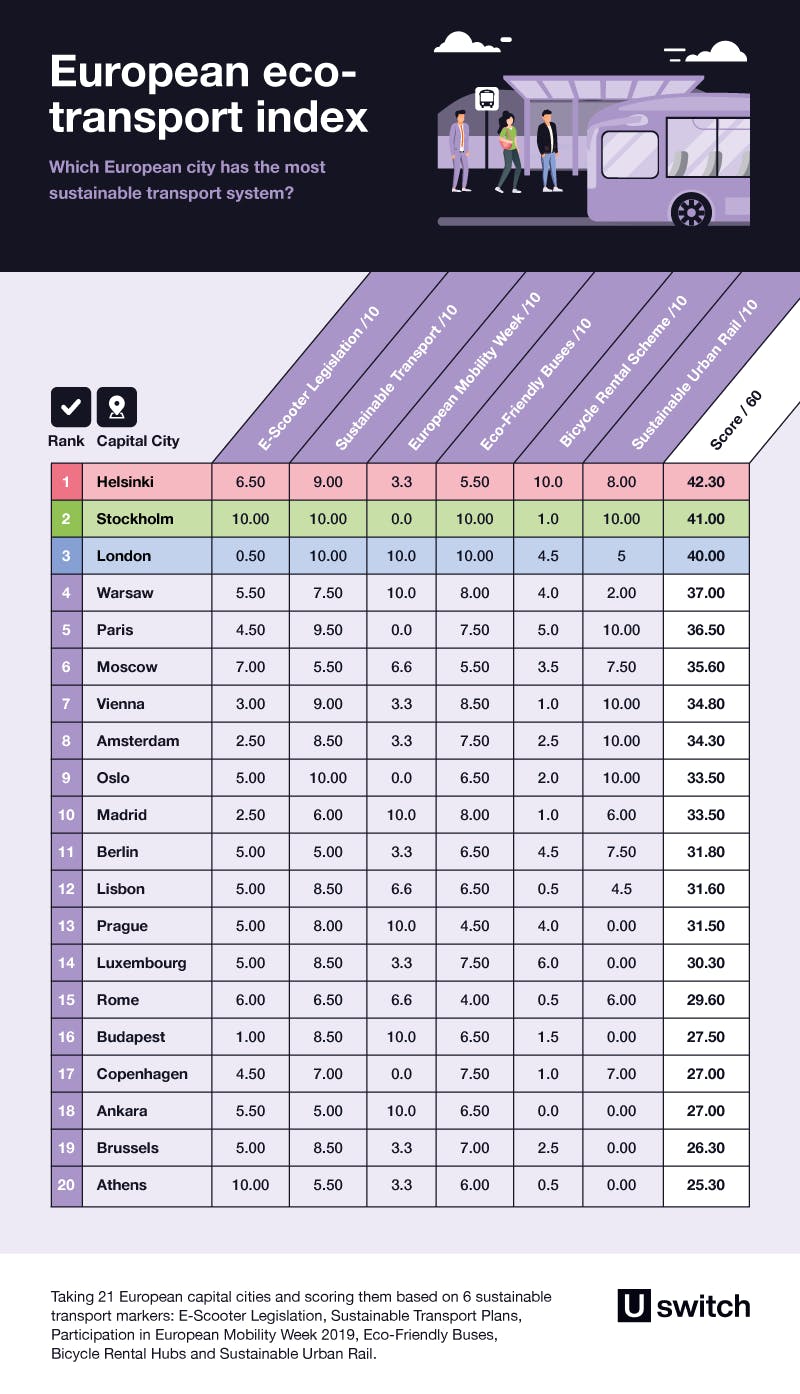 Stockholm is recognised as a pioneer for sustainable transportation in 2017 the Swedish capital began operating its buses and metro on 100% renewable energy. Now 43% of commuting trips in the city are made by public transport, totalling to 800,000 people per day.

Scoring 41 out of the possible 60, Stockholm ranked in second place on the Sustainable Mobility Index. In 2018, Stockholm introduced an electric scooter rental scheme across the city. As they can travel at speeds of up to 20km per hour, these motorised scooters set a bold example for multimodal urban transport.

London scored top marks for its sustainable mobility credentials, having the third-highest consciousness when it comes to its impact on the environment. By 2041, the Mayor aims for 80% of all trips made in London to be made by foot, cycling or public transport. Currently over 2,600 diesel-electric hybrid buses which are more fuel-efficient and cleaner run through London, reducing emissions by 30-40%.

In order to reduce city congestion and motivate cleaner forms of transport, London council has introduced a tax on automobiles entering Central London during weekdays. As a result of the London Congestion Charge, there have been 70,000 fewer automobiles in Central London, an increase of 6% in bus journeys and 5% more travel by cycling.

How many cars are removed from the roads in these capital cities?

The Europe passenger car fleet increased by 8% from 2014 to 2018, with the number of cars on the road rising from 248 million to 268 million. Rising temperatures in parts of Europe have encouraged some capital cities, including London and Madrid, to issue pollution warnings. The Spanish capital Madrid aims to reduce pollution by 40% in the city by 2030, which is the limit required by the Commission’s Air Quality Directive.

Based on the number of annual rides taken on the urban rail in each of the 21 European capital cities, the energy team has revealed how many car journeys would have been removed from the road each year.

With an annual ridership of 15 billion in 2019, the Paris urban rail is the busiest metro system in Europe. The 214 km rapid transit network serves 16 lines through 25 stations from La Défense-Grande Arche to Château de Vincennes. The Parisian rapid rail removed 9.1 billion car journeys from the road last year.

Which UK city has the most sustainable transport system?

Transport is the biggest source of air and noise pollution in the UK. In fact, in 2018, road transport made up around 33% of the UK’s total CO2 emissions. Reducing emissions remains a significant challenge as the UK looks to now reach zero emissions by 2030.

Following a surge in walking and cycling levels across the country during the Coronavirus pandemic, the UK government has actioned a £2 billion plan to provide wider pavements, safer junctions, pop-up cycle lanes and cycle and bus-only corridors. The government will provide funding for local authorities, including Greater Manchester, which plans to create a 150-mile protected cycle track, and Transport for London, which plans a ‘bike tube’ system for its Underground lines.

Amid the country's rapid urbanisation, popular growth and ageing infrastructure, transport systems remain the heart of the modern city. Uswitch has created a UK Sustainable Mobility Index for the most pioneering city for urban transportation, based on six sustainability credentials.

On average, 176.8 million journeys are made by bus and 117.5 million by Tube in London each month, based on statistics from November to December 2019. With London’s population set to increase to 10.5 million by 2042, moving away from polluting motorised vehicles and towards sustainable public transport, walking and cycling will help the capital city reduce its carbon footprint. With a score of 55 out of the possible 60 on the Sustainable Mobility ranking, London is the UK’s most sustainable city for transport.

Liverpool, located in the North West of England, has one of the country's most sustainable transportation systems, scoring 43.5 out of the possible 60. In an effort to decrease its energy consumption and carbon footprint, the city has implemented a fleet of next-generation emission standard buses operating in Liverpool city centre which have significantly lower levels of carbon monoxide and nitrogen oxides.

In 2013, the Merseyside Rail (Liverpool Urban-Rail) reduced its overall electricity usage by 19% through technology enhancements and employee training. Ainsdale Station, located on the Merseyside Rail, is the most sustainable station on the network. The station has a built-in rainwater harvesting system to supply the toilets, thermal insulation, low energy LED lighting and 30m2 of solar panels, which provide energy for the majority of the station.

Landing in fourth place on the Sustainable Mobility Index is the Northern city, Manchester, scoring 39.5 out of the possible 60. The Metrolink service in the city is powered entirely by electricity and 62% of the tram’s power comes from wind power while the rest is produced from other sustainable sources like recycling waste, water power and burning natural fuel such as wood chips and grass.

There are currently more than 250 buses in Greater Manchester with Euro VI engines, which limit the harmful emissions transmitted from a petrol or diesel engine. The city currently has a fleet of 101 environmentally friendly diesel-electric hybrid buses and three fully electric buses, running through the city centre, Bolton and Stockport town. Of the 87 Yellow School Bus fleets, 52 are also powered by diesel-hybrid, which consume less fuel and emit less CO2 than conventional petrol or diesel vehicles.

Each city could score a maximum of 10 points for each element, and we used a weighted ranking system to achieve the final score out of 60.