New research has revealed that almost two thirds (62%) of people claim to have had an issue with mould in their home at least once, with conditions in the home the most common reason for the spread of mould.

For its new Mouldy Nation Report, the energy experts at Uswitch reveal the mouldiest hot spots in the UK and analyse some most common causes of growth, to help raise awareness of this unpleasant and potentially dangerous issue.

Firstly we investigated the prevalence of mould around the UK by looking at the areas in which people have experienced mould in their home.

Percentage of people who had mould in each region:

Percentage of people who had mould in each city:

It may be no surprise that London’s the city where people have experienced mould the most. Over a quarter of respondents who declared they had mould found it in properties in London. This is followed by Birmingham, the only other city where the percentage of people finding mould reached double figures (10%).

The four most populous cities in the UK (London, Manchester, Birmingham, and Leeds) also take the top four spots for mouldiest cities, raising questions over accommodation conditions and overcrowding.

Surprisingly, some of the smaller cities in terms of population such as Bristol, Brighton and Norwich are more notorious for mould than the larger metropolises of Sheffield and Liverpool.

How are local councils and authorities dealing with mould?

Can mould affect my health?

Over a quarter of mould victims agreed that mould had affected their health in some way. While being around mould may cause minor illnesses like a runny nose or coughing, for those with asthma, mould allergies, and weakened immune systems, it can trigger a much stronger reaction. In our survey, 9% of respondents shockingly believe that the mould in their home led to them having an asthma attack and 10% of people believe that it compromised their immune system. But aside from the physical issues people have encountered due to their mouldy homes, mental health has also been affected with 13% of people stating that it’s made them depressed.

Symptoms people have experienced due to mould in their home: 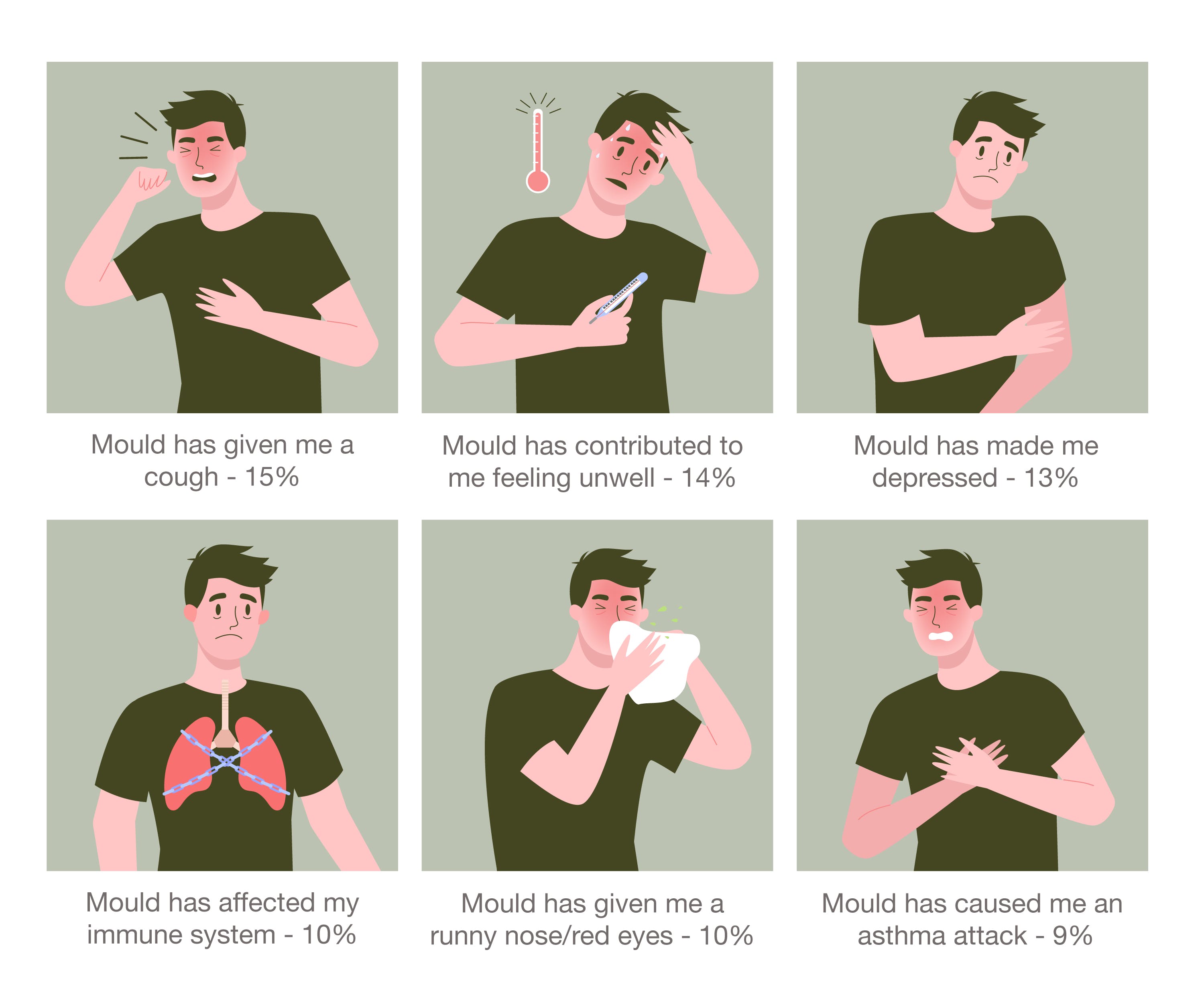 "Contrary to popular misperceptions it's not mould itself that's the problem for those with a mould allergy, but the spores it produces. So if you’re allergic to mould spores you may have symptoms like a runny nose, coughing, wheezing, sneezing and/or watery eyes. If you also have other respiratory allergies like allergic rhinitis and asthma, mould spores may act as a trigger and exacerbate these conditions."

"If you have these symptoms and find mould, avoidance is recommended in the first instance. It's advised that you do not attempt to clean the mould yourself, but pass this task on to a willing relative or friend."

"Using a non-sedating oral antihistamine can be an effective way of treating allergic symptoms and if the eyes or nose are also problematic then targeting these areas with medication in the form of eye drops or nasal sprays may also help. A pharmacist can help with choosing the right treatment and medication. If you are worried about your symptoms then it is advised to discuss further with your GP."

Who is responsible for mould, the landlord or tenant?

As the number of people in private rental accommodation increases, so does the rift between landlords and tenants. Tenants may find that they don’t want to spend their money on fixing issues with a property that isn’t really theirs. Whereas landlords will not want to see their properties neglected, and without having easy access to sort it themselves, arguments can ensue.

In the study, 40% of people stated they wouldn’t clean mould themselves if they were in a rented home, with 64% of people believing mould is solely the landlord or letting agency’s responsibility. However, it’s not a black and white issue, with responsibility falling on both parties.

Our research has shown that those who are younger are more likely to have been blamed for mould growing in their home (44% of 16-24 year olds compared to 11% of over 55's), with men (57%) bearing the brunt of this. But as for the reasons these people have been blamed, it may be due to the following:

Many of these things can be easily avoided.

Keeping the heating on is too expensive

Sadly for those that have had mould, 46% of people struggled to pay their heating bills and may have not been able to keep their home adequately warm to prevent it. Out of this group, young adults aged between 25-34 struggled most, whereas those aged 55+ struggled least. 5% of people admitted to not having the heating on at all when they had mould.

Sarah Broomfield, energy expert at Uswitch.com, comments on the financial struggles of paying for heating:

"It's unacceptable that so many struggle to pay their heating bills. Those avoiding putting their heating on in fear of unaffordable costs, may inadvertently contribute to the growth of mould in their home".

“With the findings that the majority of those who experience mould are tenants, it’s advisable that they contact their landlord to come to an agreement on how to tackle it. Tenants should also be aware that if they pay the heating bills themselves, they have the right to switch energy suppliers to find a cheaper deal.”

“Whether you’re a homeowner or tenant, if you find you're struggling to pay your energy bills, there's plenty of help out there — from government grants to supplier support.”

Ensure you’re getting the best deal for your home by completing an energy comparison.

Free tips on how to prevent mould

How do I clean mould?

Sometimes we can do all of the above to prevent mould, but it’ll just slowly creep in. As mouldy spores begin to spread across our walls and ceilings, it’s natural to want to use the strongest cleaning chemical we have available under our sinks. Bleach. Perhaps it’s the strong scent that has led to a third of us thinking it’s right for the tough job of mould removal. However, bleach simply takes the colour out of the mould leaving us to believe that it’s gone, when in fact the fungus is well and truly there.

Here are some alternative tips for cleaning and removing mould: 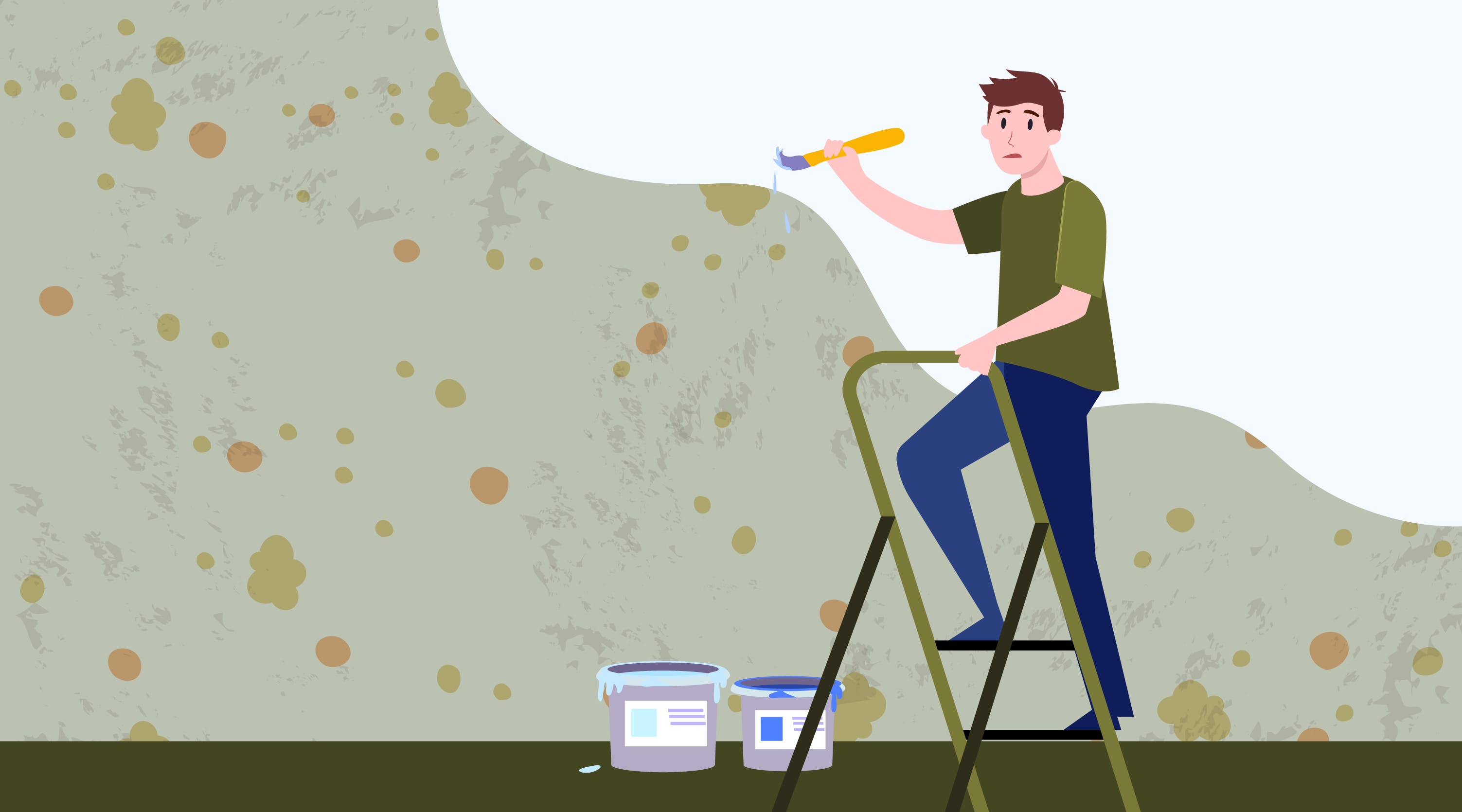 Prevention is better than cure

The key takeaway is that it’s always going to be an easier ride if mould is prevented rather than cured. The health implications, financial impact, and labour required in coping and dealing with mould can be much larger than most people would imagine. You can follow our above advice in ensuring that your home is in the best condition it can be for stopping mould in its tracks.