How to build a self-sufficient garden 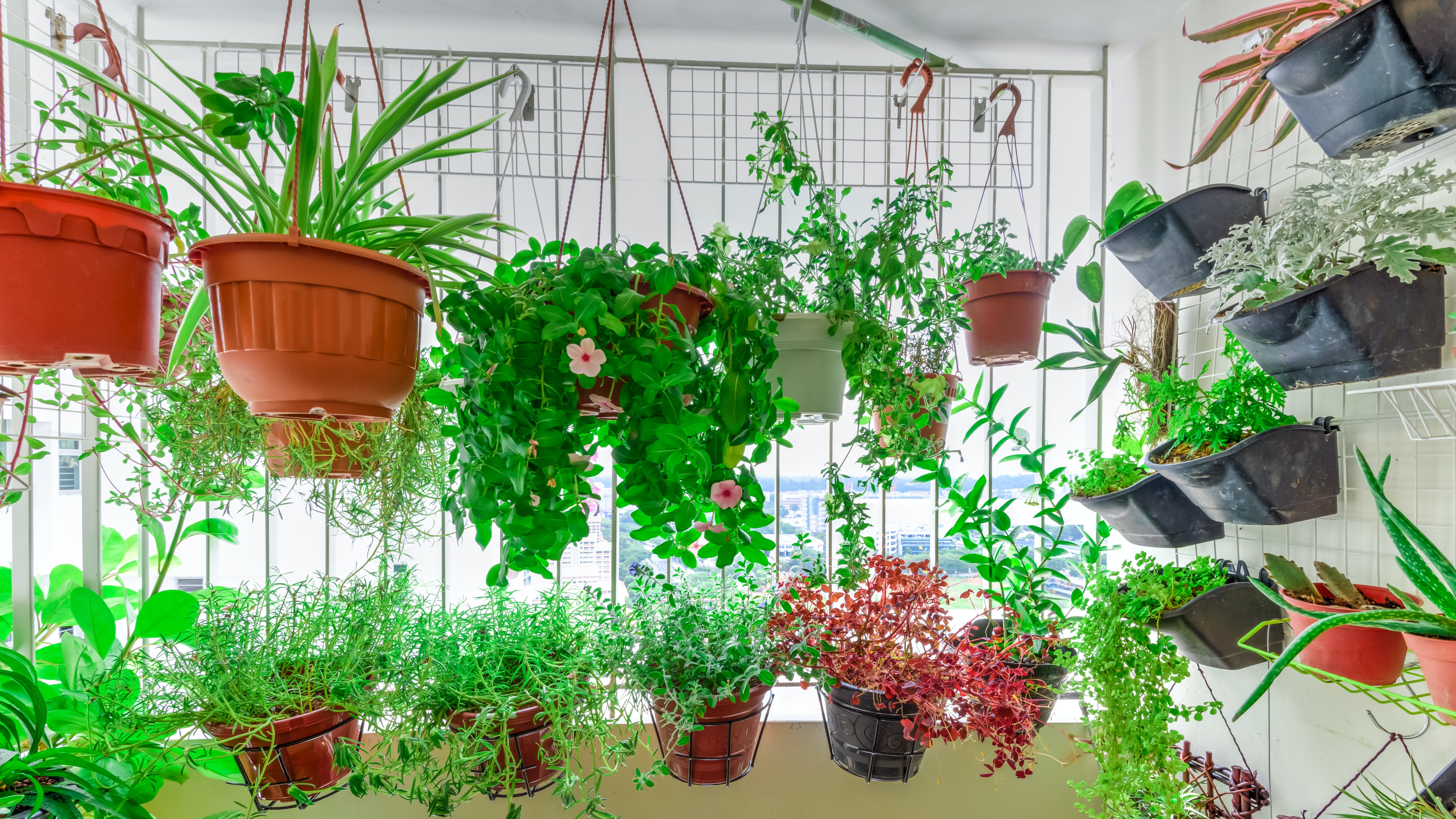 Tips for making your garden more productive and self-sustaining, no matter the size

When thinking of an English garden it may conjure up images of pristine pruned hedges, ornate benches, stone bird baths and an immaculately cut lawn. But is this really the best way to use a garden space? Instead of being just visually pleasing, a garden can be utilised to become a productive place leading to a more self-sufficient lifestyle.

One in eight households across the UK has no garden at all, rising to one in five households in London. And the lucky ones that do have gardens in the capital will find that their spaces are 26% smaller than the national average. It seems a shame that those who are lucky enough to have these outdoor spaces maybe aren’t using them to their full potential.

It’s also probably no surprise that the older you are, the bigger the garden you’re likely to have. Those 45 and above have an outdoor space that is 15m² on average compared to 12m² for those aged 25-44. However, that’s not to say that those with smaller space can’t take steps to make it more useful than just somewhere to sunbathe, as David Robinson, Managing Director of Suttons Seeds confirms:

“You can grow a surprising amount of food within a square metre and it will end up being cost effective. Even though it’s unlikely you’ll be able to sustain yourself completely with what you’ve grown, it’s a good start nevertheless.”

With the average UK household spending around £150 a year on their garden, we wanted to see what a perfectly optimised outdoor space would look like for a more self-sufficient lifestyle. Currently there are 75,000 people living off-grid in the UK, so surely those of us with outdoor spaces, big or small, could take more steps to lead a more organic lifestyle.

For those of us that rely on the grid, you can make sure you're on the best deal by comparing energy prices.

There are many ways to optimise your garden: solar, wind, water capture, growing vegetables and keeping animals. Perhaps if people felt as though their garden was working in their favour to lower their bills, they’d spend more time tending to it. Gardens aren’t just for BBQs, pretty flowers, and sunbathing - they can be a productive place to enhance your lifestyle.

The National Allotment Society says that 30 minutes of gardening on your allotment can burn around 150 calories, the same as doing low impact aerobics. Along with the physical benefits of gardening, the mental health benefits are just as important, which many green-fingered folk will vouch for. David’s advice for those with larger gardens is to “Work less, mow your lawn less and prune your hedges less. It’s great for wildlife and you can take that extra time to actually sit and enjoy your garden”.

Only got a small outdoor space?

(Click the spots below to reveal how to optimise your balcony)

So to get started with a self-sufficient small space, David Robinson offers some simple advice for those looking to benefit from their outdoor space or balcony for the first time:

Grow your own food

Vegetable patches, greenhouses and grow boxes are something that most of us are able to get our hands on in some form or another. The simple plastic greenhouses can come in at a little under £10 and grow bags for not much more. The satisfaction that comes with eating food that you have grown yourself perhaps is the main reward.

This may not be an option for those with only a balcony (unless your balcony is very large) but chickens are one of the easiest livestock animals to own. A healthy hen can give you an egg per day and add some protein to the veg you’ve been growing. Obviously, caring for chickens and cleaning them out may not be everyone’s cup of tea, but a perfectly optimised self-sufficient garden wouldn’t seem right without them.

Beekeeping is making a trendy comeback with hives appearing in urban areas on rooftops. It may not be advisable to keep them on your balcony, unless you feel like getting suited up every time you go out. But having bees is now not just for wealthy landowners. Honey sells well, so it’s considered a solid investment choice.

Water butts are one of the simplest ways to become less reliant on grid services. The back-to-basics approach of collecting rainwater is as old as humanity itself, and it’s surprising that not more of us have this as a facility, especially during the summer when hosepipe bans are rife. The lack of chlorine makes it ideal for watering plants, but not-so-safe for human consumption. Water collected and then left in the water tank can become a haven for legionella bacteria, so it would be advisable to treat it if you do decide to use it as a drinking source. Regardless, the less reliance you have on the water that’s piped to your house, the more eco-friendly and self-sufficient your household.

Composting is a great way to utilise your waste. All you need is a large enough compost bin, and plenty of food and garden scraps. Most food we put in our black waste bin could be used for composting. By taking this step instead you can reduce the amount you send to landfill and also improve the quality of your soil. This nutrient-rich food is a feast for your plants and saves you having to spend more at the garden centre. Most compost bins can be bought for under £100. The size will be determined by the amount of garden waste you produce.

The pricier side of self-sufficiency

Solar panels can divide opinions. Their initial expense is often debatable as to whether they are financially viable and with the erratic weather of the UK, is there a guarantee that you’ll get enough sun? Despite this, they are still growing in popularity as prices slowly fall. To produce anywhere near enough energy to run your home, you’d need a good amount of panels covering your roof costing on average £6,000. This outlay may not be possible for most, but a quick Google search of “small solar panels” will show results only costing a few hundred pounds and the little bit of energy they produce could take off the edge from your electricity bills.

Take advantage of the wind

Harnessing wind power is in the realms of everyone who has an outdoor space. The two domestic options available are pole-mounted and building-mounted wind turbines. Pole-mounted is the best of the two in terms of energy output. The ability to have a tall pole taking advantage of the higher, uninterrupted wind speeds makes it ideal for larger gardens. But, building-mounted turbines should not be ignored. The price alone is much more appealing with a building-mounted turbine costing £2,000 compared to £28,500 for its bigger brother. For those with only a small balcony space a new innovative invention may be the future. The winner of the 2018 Dyson Award; O-Wind takes advantage of horizontal and vertical winds without requiring steering. Apartment dwellers could efficiently, effectively and sustainably generate electricity.

Something to consider if you have a renewable energy source such as solar panels or wind turbines is that any extra energy you produce that you don't use straight away is lost or pumped back into the grid. So it’s worth considering a battery system where this energy can be stored. No longer is this just for nonconformists living off-grid, new “smart” homes are looking at this as more of a standard. If you have a renewable electricity generation system in your house, such as solar PV, then you will inevitably generate more electricity than you need at times of high supply and low demand, with any surplus exported back into the grid but home batteries such as Tesla’s Powerwall are changing this.

The environmental benefits of being more self-sufficient

With solar and wind energy having the most support over gas, coal and nuclear it’s becoming apparent that renewables aren’t just for the hippy minority. The growing shift in opinion over environmental issues is seeping into our daily decision making. You may not be able to change the world just from your garden or balcony but you can certainly do your bit, and for the energy you do require from the grid still, you can choose to go green.