The Department for Transport (DfT) has published the nation’s first official framework for e-scooter rentals, which enabled trials to start from 4th July.

Until recently, e-scooters were completely banned from the UK’s roads, but pilot trials for rental e-scooters have been fast-tracked into place, with the aim of discouraging workers from using their cars as they return to work following the easing of lockdown in the UK.

The e-scooter rental trials were originally earmarked to take place in just four transport zones, but they will now be offered to all areas across the nation. So far, 50 councils* have expressed an interest in hosting an e-scooter rental scheme, but which of the UK’s biggest cities are actually ready to give the green light to e-scooters?

Taking 40 of the UK’s most populous cities, the energy team at Uswitch have analysed the ‘e-scootability’ of each city, based on air quality, pothole complaints, bike thefts and planned cycle lanes to give a maximum score out of 70.

Scoring 50 of 70 available points, Newcastle is the city with the most e-scootability. With over 13km of planned cycle lanes and just nine pothole complaints in the last year** making the city the perfect candidate for an e-scooter trial. 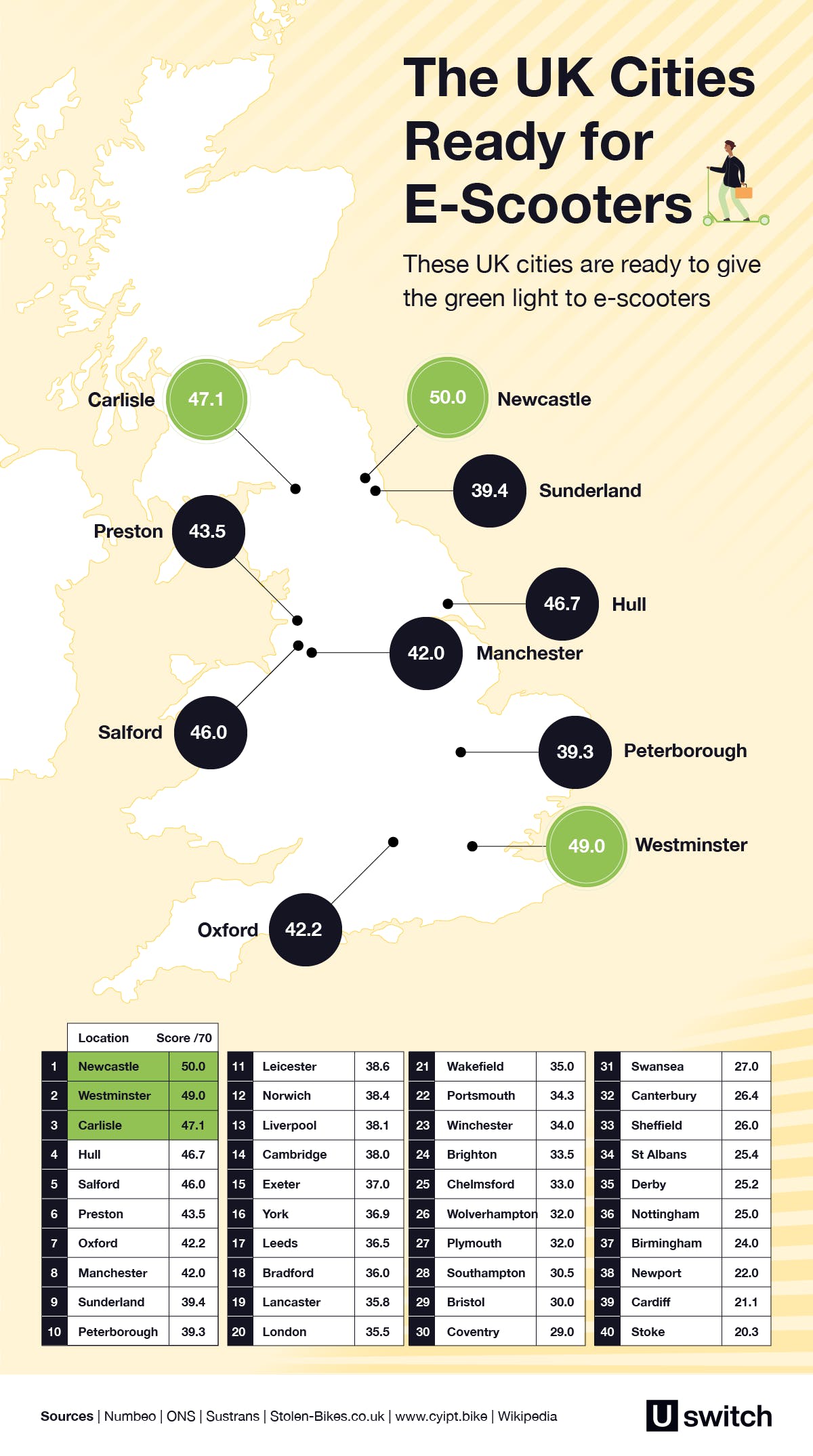 The North is ready for the e-scooters to arrive

The North is home to the most e-scootable cities. Seven out of the top 10 are located in the north of England; Newcastle, Carlisle, Hull, Salford, Preston, Manchester and Sunderland all score high on the e-scootability index.

Scoring 42/70 overall, Manchester has the highest number of pop-up cycle lanes and over 24km of planned cycle lanes where e-scooter users can get from A to B safely.

When it comes to road quality, we scored each city based on the number of pothole complaints made via FixMyStreet. Leeds had the smoothest roads for scootering, followed by Exeter and Cambridge. With over 400 pothole complaints combined, it seems that the roads in both London and Manchester could do with some attention to get them ready for e-scooters.

A breath of fresh air

Using the air pollution index score from Numbeo***, we scored each city based on the potential pollution levels that e-scooter riders would face.

Preston (16.79) and Carlisle (19.89) topped the list as the cities with the best air quality, making them a great candidate for e-scooter trials. Arguably, cities with very poor air quality such as Wolverhampton (63.22) and Wakefield (62.07) could also benefit from an emission-free option such as e-scooters.

The index scored each city based on the length of planned cycleways from the Cycling Infrastructure Prioritisation Toolkit (CyIPT). These cycleways could be used by e-scooter users, keeping riders safe and away from traffic. London Westminster topped the list with almost 97km of cycleways planned in and around the combined city area, followed by Salford and Manchester with 25km of two-wheel-friendly routes planned.

Predicting the popularity of e-scooters

To understand the potential uptake of e-scooters, we scored each city based on the number of people who were already using two wheels to get to work. Cambridge topped the list with 15.34% of the population already cycling, followed by Westminster (12.42%), Oxford (8.75%) and York (5.29%). This suggests that these cities would be open to this new, green form of transportation.

Will Owen, energy expert from Uswitch, comments on the results of the e-scootability index:

“Cities all over the UK have been working hard to stop the spread of COVID-19 and with lockdown finally easing, we’re seeing a welcome push towards climate-friendly transport options such as e-scooters.

“Later this year, the UK will join several European countries including Spain, France and Italy following the release of the DfT’s e-scooter rental framework. 50 city councils have already applied to be part of the trial.

“But the research behind the e-scootability index revealed that some cities were more ‘geared’ up for their arrival than others, with cities in the North making up 70% of the top 10 list.

“Rental e-scooters will be banned from footpaths to protect pedestrians so road safety is another factor that needs to be considered. Alongside the obvious environmental benefits of e-scooter rental schemes, there are many other factors for regulators to consider.”

Will e-scooters make a difference to the UK’s daily commute?

As the UK slowly unlocks, e-scooter rental companies look set to revolutionise the way we travel to and from the office.

So we’ve asked energy expert Will Owen to tell us why he thinks we should follow the US and Europe’s lead when it comes to implementing our own emission-free commuter scooter schemes.

It’ll reduce the amount we spend on our daily commute

If a similar model was adopted here in the UK, that would reduce monthly commuting costs by 69%.

We’ll reduce the amount of CO2 in our cities, reducing air pollution overall

There is a growing concern over a sudden spike in air pollution as more people follow advice on avoiding public transport as they return to work.

Global e-scooter rental brand Lime announced that they have just passed 150 million rides globally, and their calculations highlight just how environmentally friendly e-scooters are. Lime says that these rides have saved:

Usage needs to be safe and regulated

There has been a lot of debate in the press about e-scooter safety with many European countries reporting problems with illegal parking and accidents. France, for example, sets speed limits and prohibits parking anywhere but designated spaces.

However, figures from a recent study confirm that e-scooter riders do not face much higher risk of road traffic incidents than cyclists do, despite some concern.

To ensure the safety of rental e-scooter users, pedestrians, cyclists and others, The Department of Transport has already provided safety regulations and guidance.

When it comes to enforcing the regulations, the UK could follow the example from France. Any e-scooter riders found to be breaking the laws could be fined up to €135 (£121).

The E-Scootability Index data can be explored in full here: https://docs.google.com/spreadsheets/d/1LM_kSHG4VFC2wtSj-_lxZObva3RI9YX5DXarwBCFflM/edit?usp=sharing

Uswitch analysed data from 40 UK cities with a population over 100,000 and analysed seven different data sets that related to the infrastructure of each city and their suitability for e-scooter uptake.

Each city could score a maximum of 10 points for each element, and we used a weighted ranking system to achieve the final score out of 70.

Find out more about the impact of electric vehicles on your energy bills.