The Samsung Galaxy S7 is here at last. And by all accounts, it's a superb smartphone.

It has a better camera, it's waterproof, and it's got room for a lot more content thanks to a microSD card slot that lets you expand its storage.

But as with all new flagship smartphones, the Galaxy S7 doesn't come cheap.

If you're currently using the Galaxy S6, you might wonder if it's worth upgrading.

Or maybe you're looking for a new phone, and are torn between the latest and greatest Galaxy S edition, or the slightly cheaper S6.

Either way, we've compared all the major specs to give you the lowdown on how the two stack up.

Read on, and we'll help you decide which is right for you.

The main improvement of the S7 over the S6 is in the camera department.

Samsung has employed some imaging tech previously seen on Canon's digital SLR cameras. The upshot of which is better low-light performance and faster autofocus.

The S7's camera does this by going big. In every sense.

Not only has Samsung equipped with camera with a bigger aperture – i.e. the opening through which light comes in. It has also given it bigger pixels with which to capture that light.

It all makes for more light being utilised in the camera mechanism, which means clearer shots in dark environments, such as pubs and on cloudy days.

The S7 also splits each pixel in two, both of which take in light independently of each other.

Taking into account the difference between the two pixels, the camera can more accurately measure the light situation, and can autofocus quicker and more accurately.

The S6 might lack these features, but it's no slouch when it comes to taking photos.

In fact, it's one of the best camera phones we've ever tested. Pictures have next to no 'noise' (that's blotches or discolouration to you and me) and bags of detail.

It's also very quick to focus. Which makes the S7's camera improvements all the more impressive. 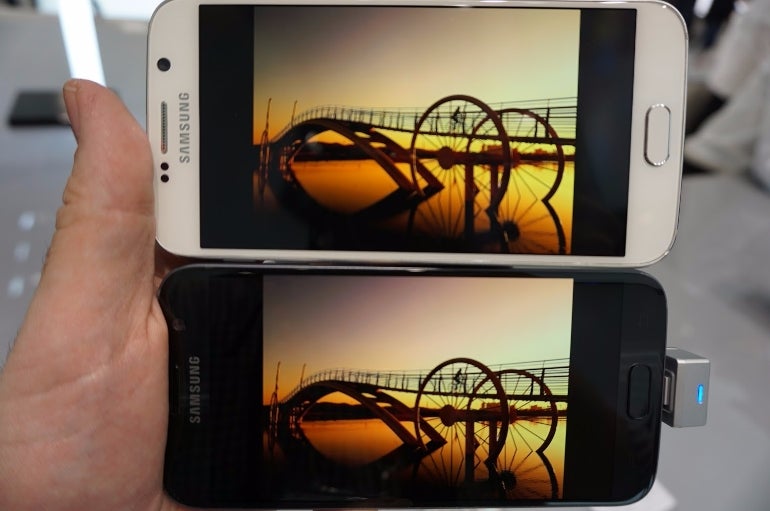 While Samsung has crammed in more advanced camera tech to the S7, it's stuck with the same screen as the S6.

Not that we're complaining. The 5.1-inch QHD Super AMOLED display they share has fantastic viewing angles, is super bright and extremely crisp.

There is one big change though. The S7 features what's called an 'always-on' screen.

This doesn't mean the screen is constantly lit up. It means when the phone isn't in use, the display still shows useful information, such as the time and notifications, against a black background.

The advantage of this is that you don't have to wake the screen to see this information.

In turn, it uses far less battery, so should help the phone last longer before you need to recharge.

It's basically the same feature as seen on the Moto X.

One other difference: the S7 Edge variant is slightly bigger than the standard S7 and features a 5.5-inch screen, with the same resolution.

If you cast your mind back, you may recall that the S6 Edge was the same size as the S6, so who knows why Samsung chose to make the S7 Edge bigger.

The fact that it did, though, suggests that this time around there won't be an S7-branded sequel to last year's S6 Edge Plus, which had a 5.7-inch screen.

The S7 can be submerged in up to 1.5 metres of water for up to 30 minutes and come out as good as new.

Even better, there are no cumbersome rubber flaps on the ports, as there were on the S5, which was the last phone the Galaxy S series to be water-resistent.

But be wary: the S6 isn't 'waterproof', it's 'water-resistant'. So you'll still be careful if you're near a pool/sea/toilet.

The S7 has a microSD card slot!

With the S6, Samsung removed the option to expand storage capacity by inserting a microSD card, which caused uproar among fans.

But now it's back, you can boost the S7's available storage by up to 200GB.

That means you get a grand total of around 264GB if you choose the highest-capacity S7 model. Although, in reality it will be slightly lower, as the operating system takes up some space.

The S6 has no microSD card slot, meaning you're stuck with the handset's internal storage. Depending on which S6 variant you bought, that could be 16GB, 32GB or 64GB.

However, like the S6, the S7's battery is not removable, so you can't swap it for a spare if you run low on charge.

You could do with the Galaxy S5, thanks to its removable back.

The S5 had a 2,800mAh battery, which is actually a higher capacity than the S6's.

So many people saw the S6 as a bit of a step back in this department. 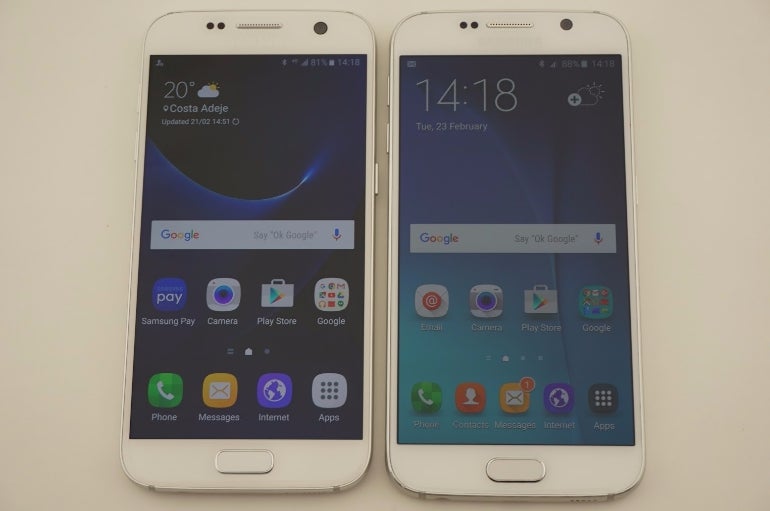 When it comes to performance, Samsung makes some of the most impressive smartphones around.

The S6 was a very mighty mobile indeed, with a real feeling of zip about it. But now it looks like the S7 should perform even better.

That's because it's one of the first phones to feature Qualcomm's brawny 820 processor.

Not only should this deliver blistering performance for gaming, watching films and switching between apps, it also shouldn't overheat thanks to Samsung's addition of a liquid-cooling pipe.

This is literally a pipe of water inside the phone that cools down the processor at times when multi-tasking and hours of continuous use puts it under strain.

Realistically, you'll only notice a difference when you're doing 'heavy lifting', such as streaming video and playing online games or doing lots of things at once.

With emailing, browsing and other general use, the Galaxy S7's beefy specs won't make much difference.

However, it's nice to know that when the going gets tough, the S7 should handle it all without so much as a shrug.

The S7 is shaping up to be an absolute powerhouse.

Samsung has clearly listened to its fans and brought back popular features, such as waterproofing and expandable storage, that were absent from the S6.

The camera also looks like being a big step up, which is pretty amazing when you consider how good the S6's camera was.

So is it worth upgrading? It depends what you use your phone for.

If you're after more power, storage, better battery life and a better camera, then it's worth spending the extra.

The always-on screen is a great addition, but otherwise the display is identical to the S6's.

The design is also very similar, so don't expect using it to be an entirely new experience.

While the S7 might not be a radically different proposition, it improves on the S6 in enough areas to make it very tempting indeed.

It's a world away from Samsung's novelty-apps-and-features approach of previous years, and for that it should be applauded.